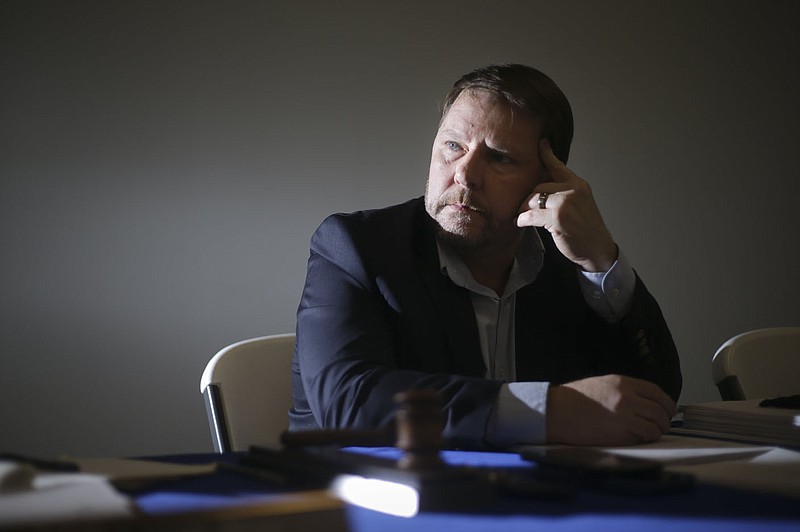 GRAVETTE -- This Northwest Arkansas city suddenly became the center of national attention after a photograph of a man from Gravette went viral in the wake of the storming of the U.S. Capitol on Wednesday.

In the photograph, Richard "Bigo" Barnett, 60, was sitting in House Speaker Nancy Pelosi's office chair with his feet propped up on her desk.

In an interview with a New York Times reporter afterwards, Barnett said he took an envelope from Pelosi's office and left her a quarter, along with a nasty note.

The photograph, and video of the interview, have sparked outrage from many, and compliments from some on social media.

"I am disappointed and embarrassed for our district," said 3rd District Rep. Steve Womack, R-Rogers, whose congressional district includes Gravette. "It was not representative of the character of Arkansas' 3rd District."

"I bet a good number of people wish they were right there with him," Mick Burden of Alma wrote on Gravette's Facebook page. "Although social media has made millions of people keyboard commandos with no recourse for their actions, a lot of people agree with him. In no way should the people or city of Gravette have to try to distance themselves from one man's actions. But, with no representation from the people who are elected to represent us, people are fed up."

Police Chief Chuck Skaggs said a family received threats on social media because people mistakenly thought their address was Barnett's home. Skaggs advised the family to stay elsewhere for a while.

Skaggs said Barnett didn't have a criminal record in Gravette. He said the Police Department had "a couple of dealings" with Barnett.

When asked about the "dealings," Skaggs said "I'd rather not go into it to be honest with you. We have no jurisdiction on what happened in D.C. He lives outside our city. We don't know Mr. Barnett. I don't know what kind of person he is or anything like that."

Skaggs said Barnett never worked for the Police Department, contrary to some of the rumors swirling on social media. Attempts to reach the Sulphur Springs police chief about similar rumors were unsuccessful Thursday.

Maddox posted a message on the city's Facebook page that day. It said, in part: "A picture was shared by the national news of someone with his feet up on Nancy Pelosi's desk in the Capitol Building in D.C. This picture has gone viral and has brought the city of Gravette into the spotlight, which is unfortunate. We have had citizens receive threats, calls to our police, social media posts, and emails wanting to know what Gravette is going to do about this situation."

The incident occurred in Washington, not Gravette, wrote the mayor. He noted Barnett lives outside the city.

"The City believes in the right of every citizen to safely express their rights given to them by the Constitution," wrote Maddox. "However, we do not in any way condone violence, rioting or breaking the law."

After a Gravette Committee of the Whole meeting Thursday night, Mike VonRee, the city clerk/treasurer, said he was "dumbfounded" to learn the man sitting in Pelosi's chair was from Gravette.

"It's embarrassing," he said.

VonRee said he has lived in Gravette for 28 years and he doesn't know Barnett.

VonRee said some people in the audience Thursday night expressed concern that out-of-state trouble-makers might be on the way to Gravette with the intention to retaliate.

"In this part of the country, most people have guns and know how to use them," he said.

People had been harassing the city in a variety of ways, including through city websites for services such as sewer and water, said Maddox.

"Gravette is a good bedroom community to Bentonville and a great place to live," he said. "This is a one-off situation."

Meanwhile, Deputy Attorney General Jeffrey A. Rosen sent a memo to U.S. Attorney offices across the country on Thursday. The subject line was "charging in connection with violent rioting."

"Unfortunately, despite valiant efforts by federal, state and local law enforcement authorities, we still see the results of and continued instances of violent rioting in cities across the United States," wrote Rosen. "Primary responsibility for responding to such violence usually falls to state and local law enforcement authorities. But the Department of Justice and our federal partners must continue to assist in that response. Part of that federal assistance includes, where appropriate, charging violent rioters under federal law."

A variety of federal charges may be appropriate, he wrote, including "Seditious conspiracy" under 18 U.S.C. § 2384.

Section 2384 doesn't require proof of a plot to overthrow the U.S. Government, despite what the name might suggest, wrote Rosen.

"As the Attorney General noted in our discussion with you, it also applies to conspiracies with any of the following objects:

• "by force to prevent, hinder or delay the execution of any law of the United States

• "by force to seize, take, or possess any property of the United States contrary to the authority thereof.

"The statute authorizes fines and a prison term of up to 20 years," according to the memo.

Rosen wrote that other potential federal charges include:

• Interstate and Foreign Travel or Transportation in Aid of Racketeering Enterprises, 18 u.s.c. § 1952

"Of course, each charging decision should be made solely based on the law and the facts of the particular case," wrote Rosen.

Barnett's name wasn't among those listed in the news release as having been arrested.

"United States Capitol Police officers and our law enforcement partners responded valiantly when faced with thousands of individuals involved in violent riotous actions as they stormed the United States Capitol building," according to another news release from the agency on Thursday. "These individuals actively attacked United States Capitol Police Officers and other uniformed law enforcement officers with metal pipes, discharged chemical irritants, and took up other weapons against our officers. They were determined to enter into the Capitol building by causing great damage."

One of the people who had breached the Capitol was killed by police in the melee. 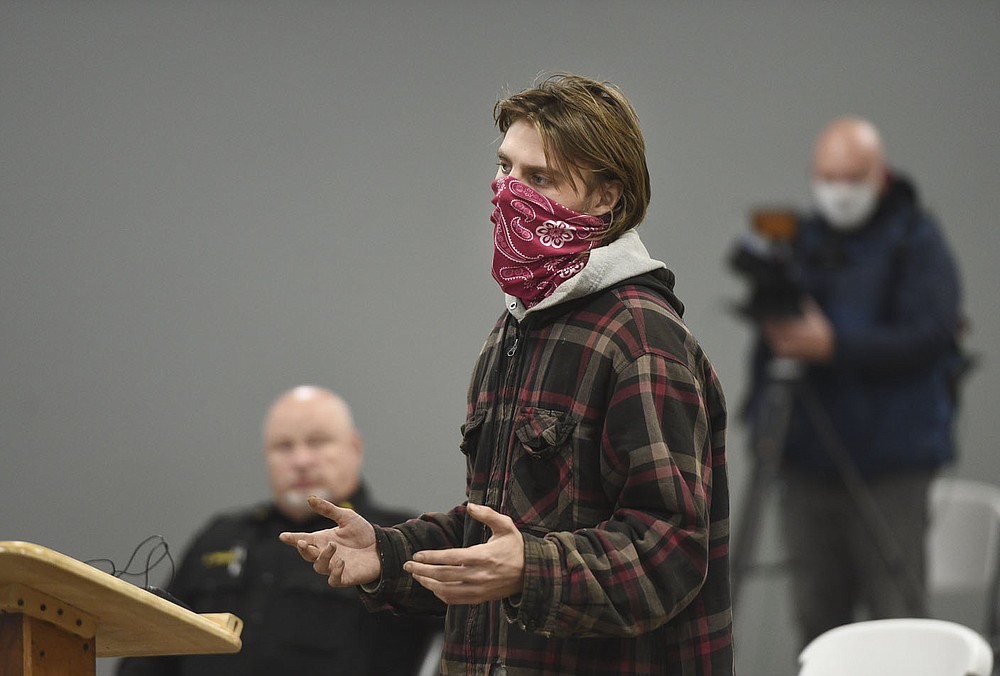 Joseph Cowan of Gravette expresses a concern to Gravette Mayor Kurt Maddox (not pictured), Thursday, January 7, 2021 during a city council meeting at the Civic Center in Gravette. He asked what measures the city would take to protect citizens from a retaliation after Gravette resident, Richard Barnett, looted House Speaker Nancy Pelosi's office during Wednesday's Capitol attack. Check out nwaonline.com/210108Daily/ for today's photo gallery. (NWA Democrat-Gazette/Charlie Kaijo)