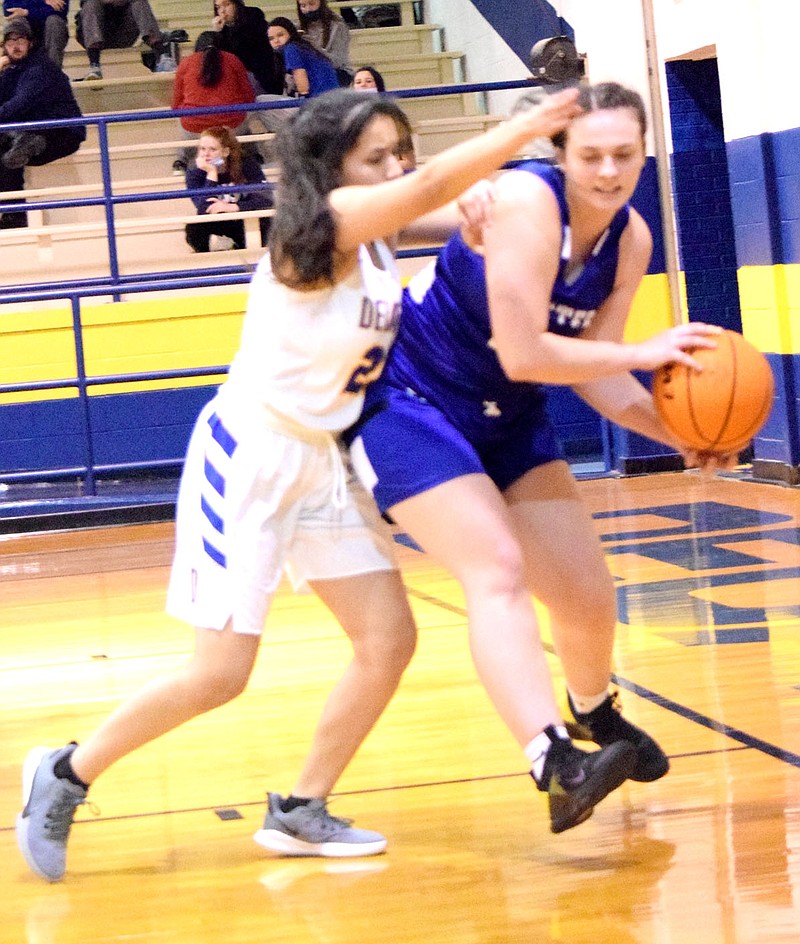 Westside Eagle Observer/MIKE ECKELS Jazman Herrera (22 left) tries to force Hailey Cunningham (20, right) into a trap along the sideline during the second quarter of the Decatur-Cotter varsity girls game in Decatur Friday night. Herrera forced Cunningham to lose control of the ball and go out of bounds with the possession going to the Lady Bulldogs,

DECATUR -- The Decatur Lady Bulldogs had an uphill battle ahead of them as the team played host to the Cotter Lady Warriors at Peterson Gym in Decatur Friday night.

The opening tipoff went to the Lady Warrior Kate Cheek, who took the ball in for a two-point layup and the first points of the contest. Anabelle Schopper put up a field goal for the only points of the Lady Bulldogs in the first quarter. Cotter continued to rack up points and, by the end of the first eight minutes of the game, led 29-2.

Decatur played strong defense during the next two quarters, forcing several Cotter turnovers. But the young and inexperienced Lady Bulldogs could not capitalize on Lady Warrior mistakes and put some points on the scoreboard. By the fourth quarter, the six-member Lady Bulldog team, made up of Anabelle Schopper, Abigail Schopper, Jackie Mendoza, Annabelle Bell, Cheyenne Ford and Jazmine Herrera, simply ran out of steam and the Cotter Lady Warriors claimed the conference victory, 70-18.

Leading the way for the Lady Bulldogs was Anabelle Schopper with 11, followed by Jackie Mendoza with three, Annabelle Bell and Abigail Schopper each with two.

The Lady Warriors had two players in double figures, including Kaylee Crownover with 23 and Rebecca Benedict with 11. Other Lady Warriors contributing to the scoring effort included Cheek with eight, Morgan Zick and Ashley Garay each with six, Hailey Cunningham and Tylar Coots each with five.

The Decatur Lady Bulldog junior high team was defeated by Cotter, 43-14, in a game played prior to the varsity contest. 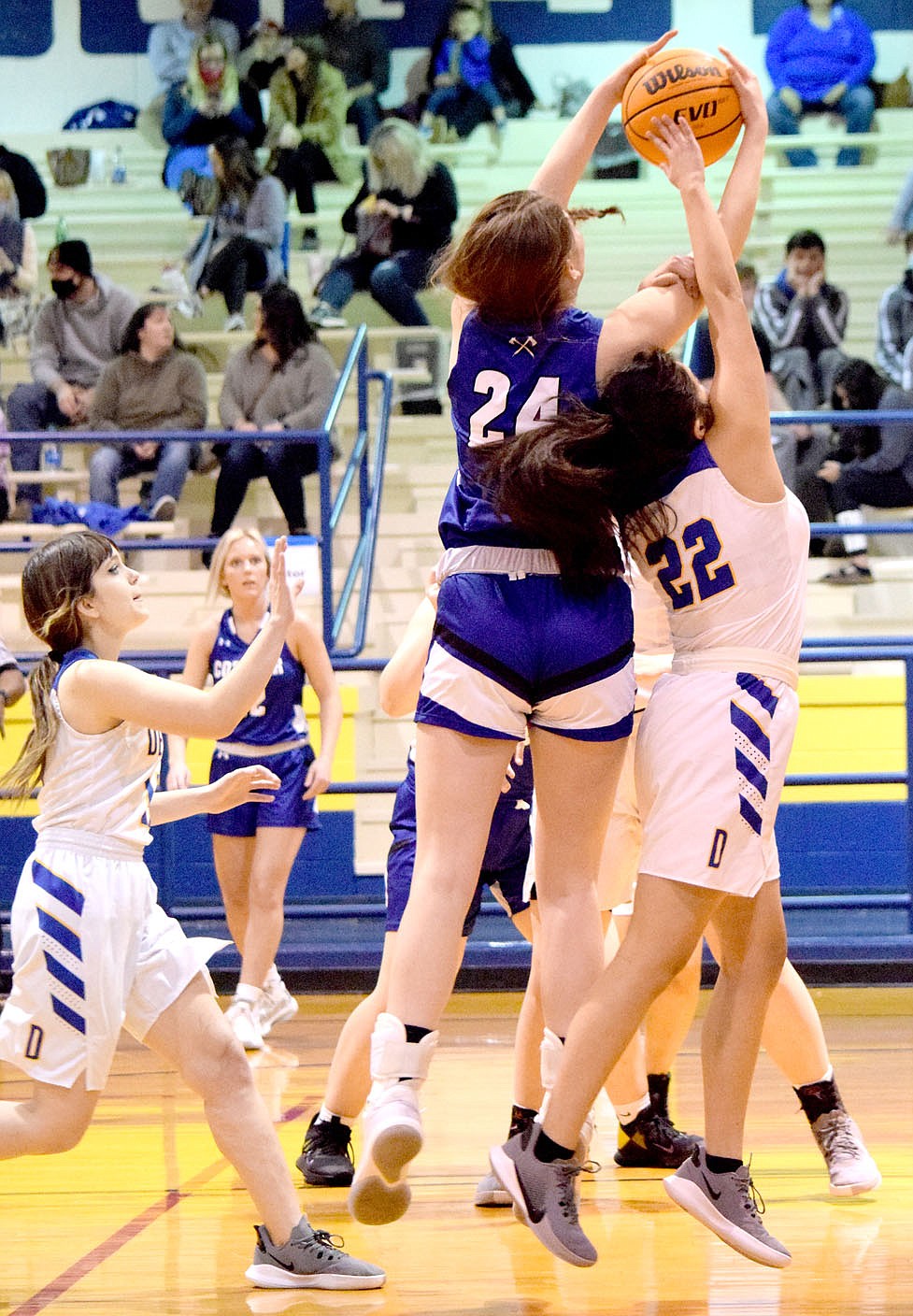 Westside Eagle Observer/MIKE ECKELS Lady Warrior Katie Cheek (24) and Lady Bulldog Jazman Herrera (22) fight for control of a loose ball during the second quarter of the Decatur-Cotter conference contest at Peterson Gym in Decatur Friday night. Cheek had the better position so she was able to come down with the rebound for Cotter. 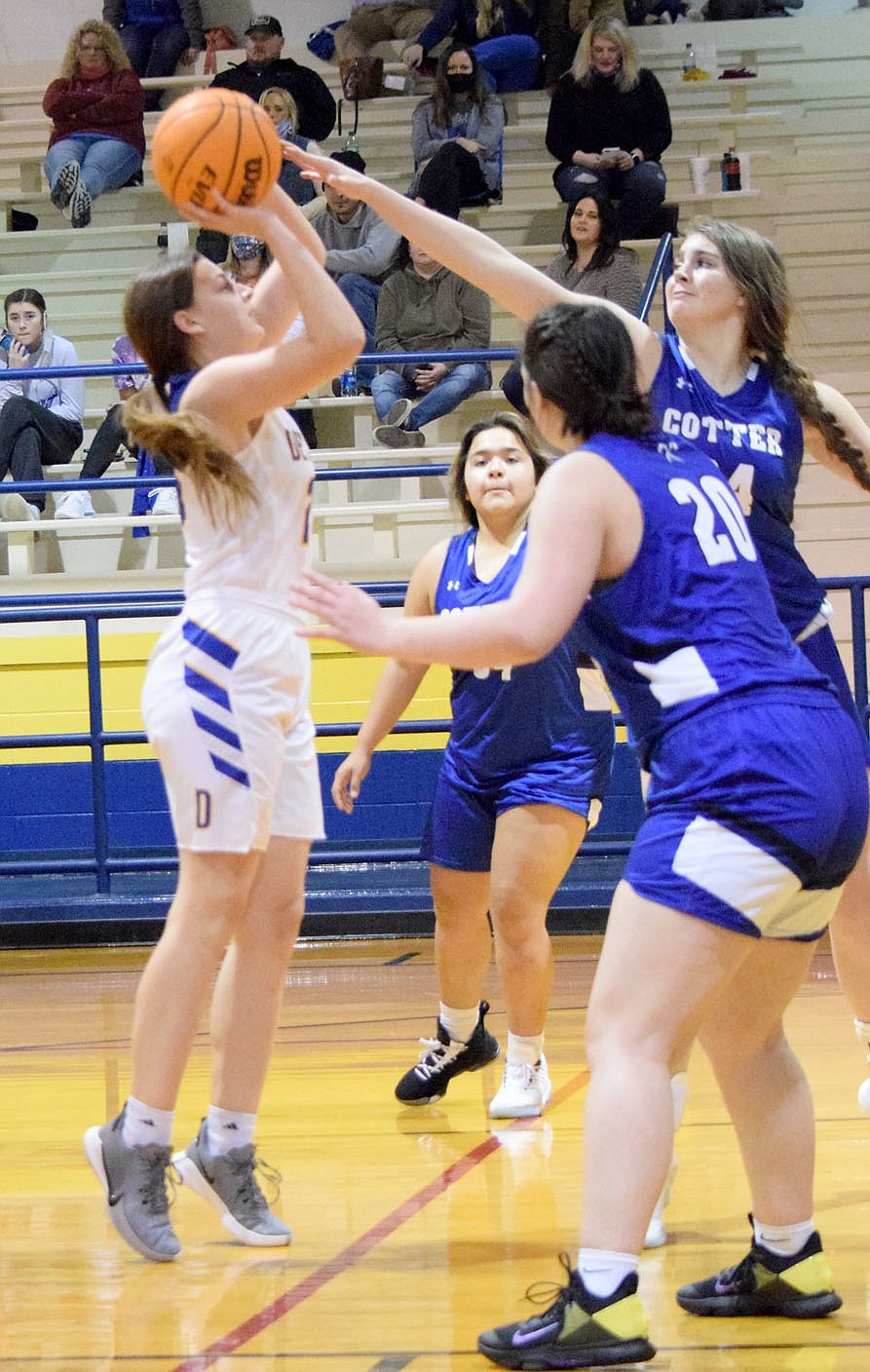 Westside Eagle Observer/MIKE ECKELS Abigail Schopper (left) attempts a jumper from just outside the lane while a hoard of Lady Warriors try to block her shot during the Decatur-Cotter conference basketball game in Decatur Friday night. Schopper's shot went into the basket for two of her six points for the contest. 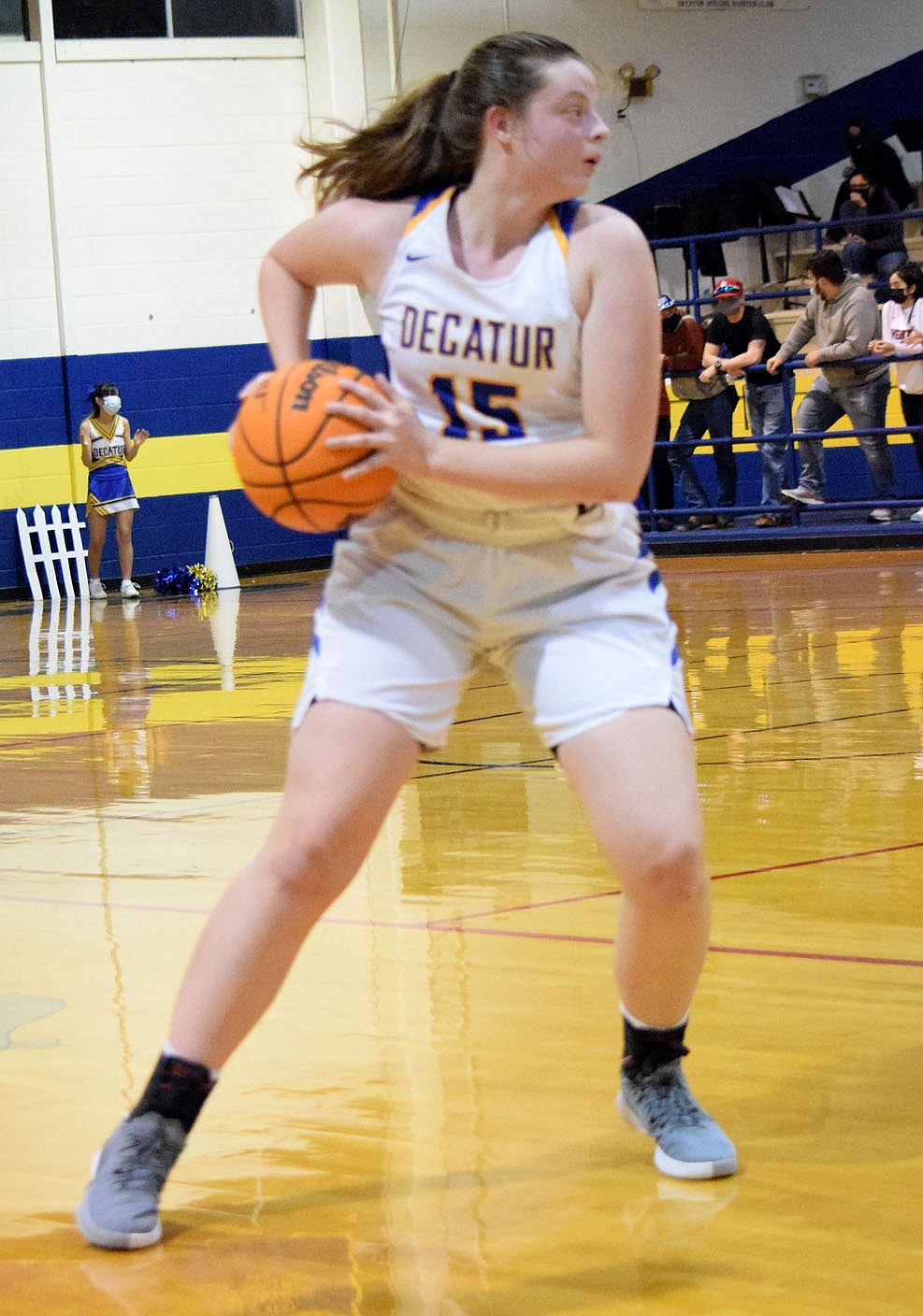 Westside Eagle Observer/MIKE ECKELS After driving downcourt, Lady Bulldog Anabelle Schopper looks for an open team mate to pass to during the Friday night Decatur-Cotter conference basketball game at Peterson Gym in Decatur. The Lady Bulldogs were outmatch by the Lady Warriors who won the 2020 district tournament which was held in Decatur.