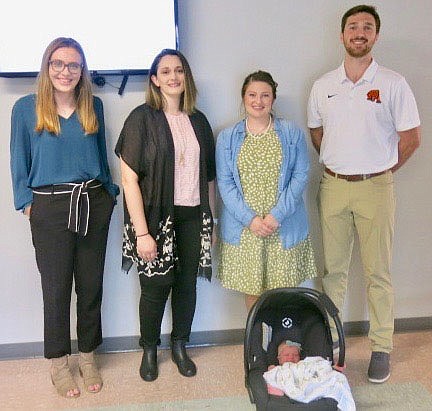 Business manager Dennis Kurczek gave the May financial report and said a bond payment is due.

Board members acknowledged the retirement of Barbara Roberts, Glenn Duffy Elementary counselor, after 36 years of service and accepted the resignations of Jessica Call, middle school English teacher, and Tammy Fisher, assistant to the superintendent.

Becky Sears, assistant superintendent for curriculum, gave the family and community engagement annual report for each building and reported that it had been submitted to the state. She said teachers were excited to have family events happening again.

Andrea Nall and Emily Ensor, district dyslexia specialists, gave the dyslexia annual report and Superintendent Childress said they had helped revamp last summer's document. 102 students are receiving dyslexia intervention and 29 show symptoms of dyslexia. Training is through Phonics First Foundation and Phonics Structures, which meet the state standards for dyslexia education. Every student in kindergarten through second grade is being tested in an attempt to include each one who needs the support.

Superintendent Childress gave a report on the school counseling plan and said Mrs. Roberts completed Glenn Duffy Elementary's plan before her retirement, including all the components required by the state. She said a ratings self-assessment has been done by each school's counseling committee. Tabby Crane said the plan was about 30 pages longer than last year. She also reported Bright Futures is organizing a drive for school supplies in the district with a good response.

Superintendent Childress reported the first goal was for 100% of students to make ambitious yearly growth in math and reading. Students in first-grade reading and sixth-grade math came closest with at least 80% of the class meeting the goal.

Another goal was to have a 10% decrease in students falling below grade level in reading. Students in kindergarten, with 13%, and first grade, with 42%, have exceeded the goal. It was pointed out that there is no way to measure the results of the goal to have all policies and school rules enforced 100% of the time. Parents agreed that the district had met its goal of meeting the expectations of the stakeholders 80% of the time.

All school policies have been updated after the last legislative session. Board members approved the first reading of the policies and will discuss them further in July.

In action items, board members voted to renew the contract with First Security Beardsley financial advisors. The district now has six outstanding bonds and Superintendent Childress recommended renewal of the contract, saying Scott Beardsley had always given excellent service.

Board members also voted to approve the athletic procedure manual. Athletic Director Norman Mitchell said bids are coming in good for work being done this summer. He also has an $18,000 bid for new lockers for the volleyball gym. Principals held a brief discussion on revising the dress code and agreed to rework it and bring it back in July before approving handbooks for individual schools. They want to make sure that all handbooks agree with school policy.

Approval was given to reorganizing the staff at the administration building and making Lacy Haag executive assistant and personnel services. Lisa Sizemore will be promoted from administrative secretary to purchasing and accounts payable.

Board members considered school choice applications and voted to approve the request for a kindergarten student to transfer in but approve transfers in only for those sixth-, seventh- and eighth-graders who already have a sibling in Gravette schools. Board-to-board transfers were approved for a ninth-grader to transfer out to Bentonville and transfer in for a 10th-grader. They denied transfers for two second-graders, one coming from Bentonville and one who has been homeschooled. Fourth- and sixth-grade siblings have requested to transfer in but board members approved only the fourth-grader and not the sixth-grader because of limited space.