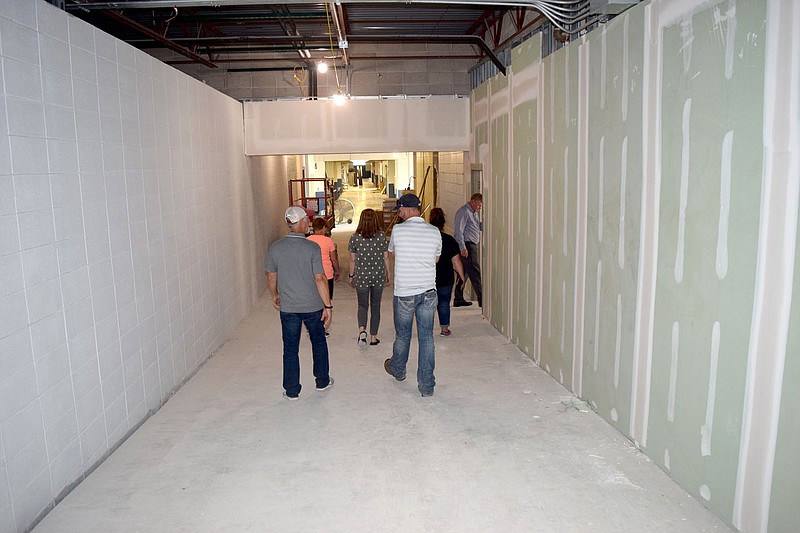 Westside Eagle Observer/MIKE ECKELS Decatur School Board members make their way down the main hallway into the old part of Decatur High School July 13 during a construction progress walk though. This hallway runs the entire length of the high school and will give students and faculty the ability to walk from class to class without going into the outside elements.

DECATUR -- Walls are going up, windows are being installed and the hallways are enclosed as work continued on the Decatur High School renovation project, which is now halfway complete. What was once three different school buildings, Decatur Pre-K, Decatur Middle and High schools are now joined as one.

The Decatur School Board performed its monthly tour of the construction project July 13.

The tour started at the new cafeteria where the floor had just received a fresh coat of wax. It is ready for the first day of school Aug. 18. From there it was into the new choir room, which at one time was the high school kitchen. The board stopped a moment to talk about splitting the room into two classrooms since the choir is small and will not need a big space to work in. The board decided to table any further discussion of this idea.

From the choir room, the board moved into the new band room (former cafeteria). The space for the band is nearly double that of the old room giving Jesse Owens, band director, plenty of room to grow his ensembles. Where once the stage that many band concerts once performed has been walled off and is now an office and three practice and instruction rooms.

The group moved to the new east-west hallway, which is an outdoor covered walkway. This part of the project is about fully enclosed. Once this part is complete, the high school, cafeteria and middle school will be joined into one building for the first time since the school was built in 1971.

From the hallway, the school board turned and walked down the main feature of the project, the indoor hallway that runs from the south end of the high school to the north end of the fifth- and sixth-grade classroom. This will be the first time that students will not have to walk outside in the weather to their next class or to lunch.

The group concluded the tour with a look at the old high school office. This space has been split into three small classrooms and meeting areas.

The renovation project is on track and barring any unforeseen weather or construction delays should be nearing completion by the start of the 2021-22 school year Aug. 18. 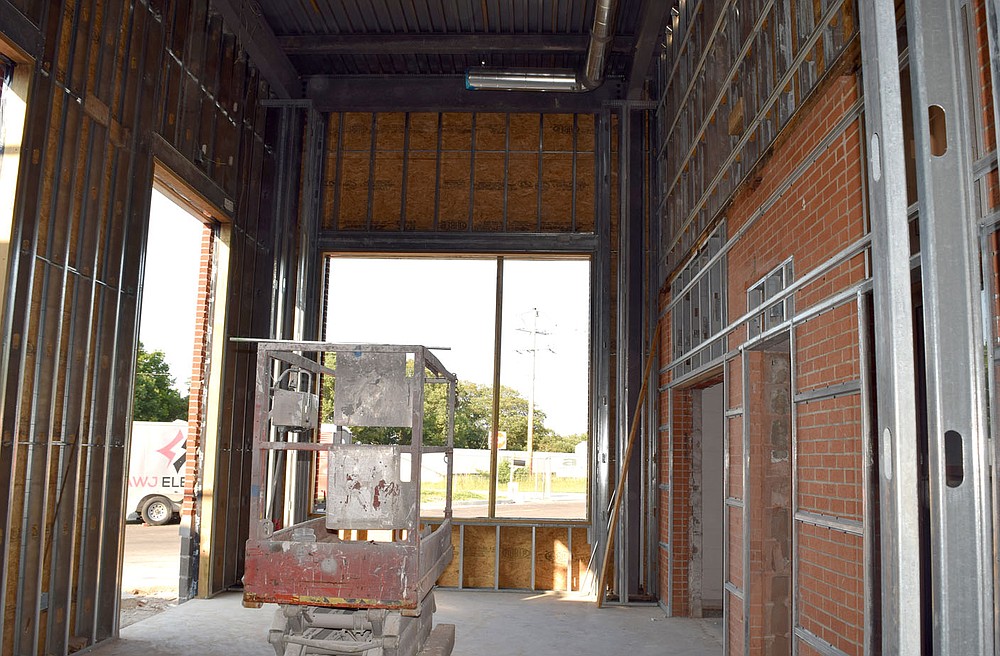 Westside Eagle Observer/MIKE ECKELS What once was an outside covered walkway will soon be an inside hallway as the main entrance to Decatur High School inches closer to completion July 13. The Decatur school board toured the facility to view the progress made on the new high school renovation project. 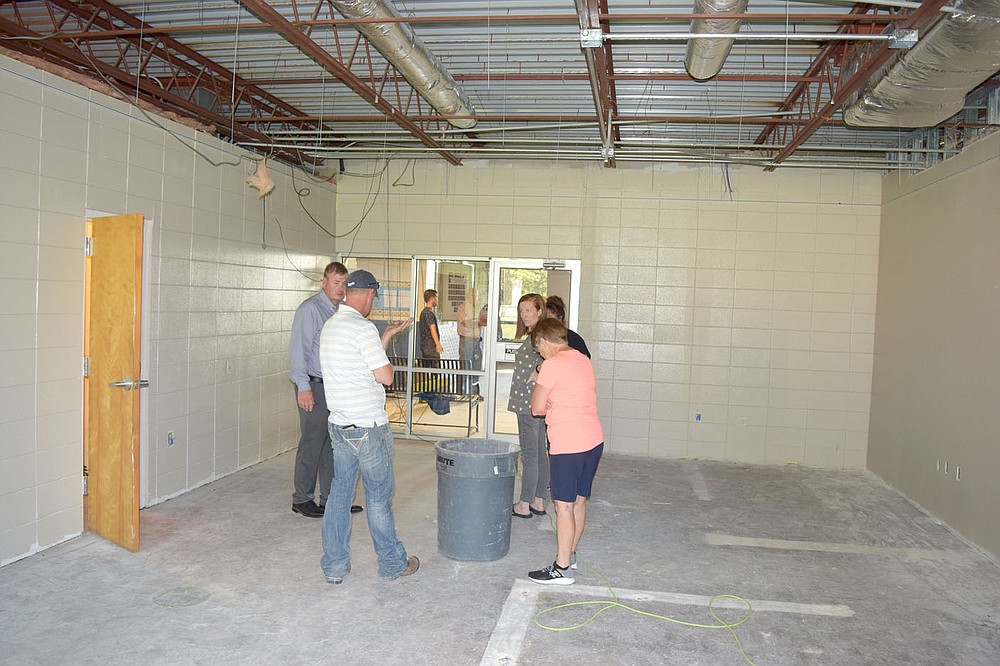 Westside Eagle Observer/MIKE ECKELS The old high school office will soon have a completely different mission as members of the Decatur school board review the progress made on the high school renovation project July 13. The old office will serve as a small classroom area when the school opens its doors in August. 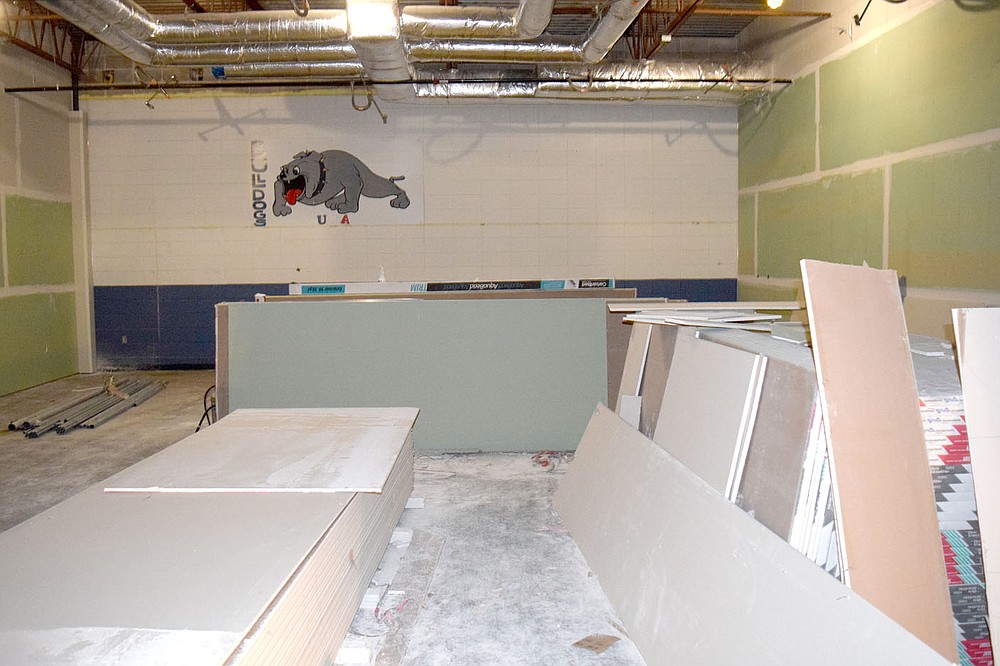 Westside Eagle Observer/MIKE ECKELS The familiar Bulldog painting that at one time greeted junior and senior high school students during lunch will soon become a symbol for the high school band. School board members toured the new band room July 13 to see the progress made so far on the Decatur High School renovation project.