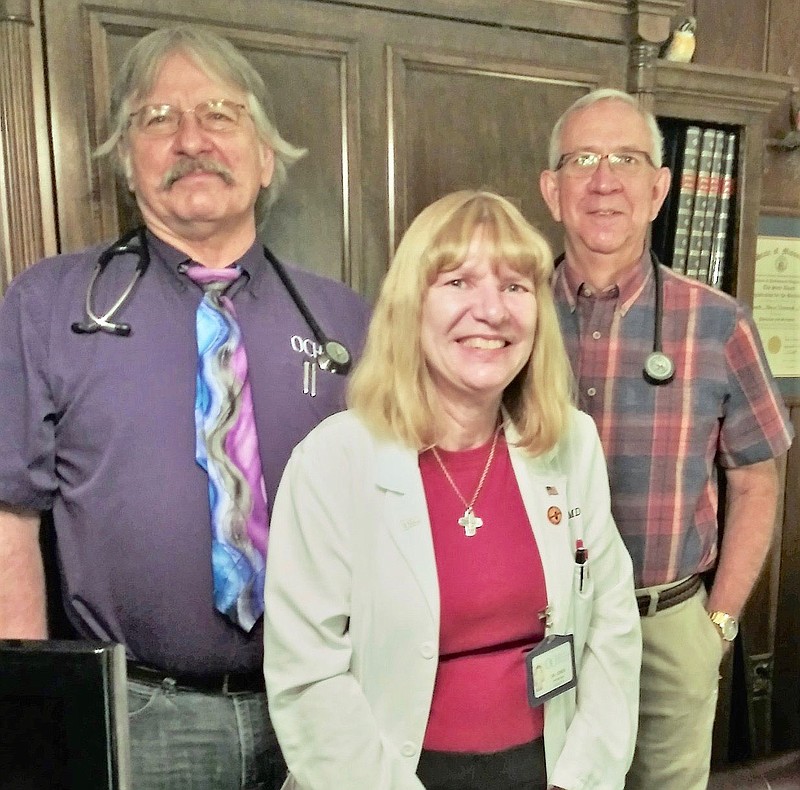 Submitted Photo Dr. David Tucker, Dr. Nancy Jones and Dr. Marc Poemoceah are being honored as parade marshals of the 2021 Gravette Day parade. Having these local physicians as co-grand marshals is meant to recognize all the area health care workers who have done such an excellent job of providing for the medical needs of patients during the covid pandemic. They will be heading up the parade Saturday, August 14, at noon.

"From the frontlines of the pandemic to the front of the Gravette Day parade, these three doctors are very deserving of being co-grand marshals. The community appreciates all our frontline workers and we are grateful for their service," said Heather Finley, Gravette Day Committee chair. "It is fitting to have this trio represent us," she added.

"I was surprised and honored to be named co-grand marshal," said Dr. Nancy Jones, who has worked at the Gravette clinic for the past 27 years. She added that the doctors represent all the OCH staff who have worked tirelessly to care for patients, especially during the challenges of the past year.

Jones has been a member of the Gravette Kiwanis Club for many years and starts each Gravette Day working at the Kiwanis pancake breakfast. She is looking forward to the parade and visiting with people who have returned to Gravette for the celebration.

As a Girl Scout leader, Jones started the Mad Hatters Annual Tea Party in which participants knit hats for cancer patients at Arkansas Children's Hospital. She is a member of the First Christian Church. Her hobbies include gardening, photography, baking and reading. She is married to Larry Jones, owner of Grumpy's Peace, Love & Coffee. Their daughter, Rachel, is a senior at John Brown University where she is studying nursing.

Dr. Marc Poemoceah, originally from Norman, Okla., graduated from the University of Illinois College of Medicine. He and his wife Ruth moved here 31 years ago to be near her family.

"It's a nice honor and I'm glad that we're doing this together," said Poemoceah about being co-grand marshals with Jones and Tucker. He is pleased to represent the dedicated OCH staff.

Poemoceah enjoys the Gravette Day parade and his favorite memories including watching his two sons, David and Daniel, marching with the Gravette High School band. He recalled that Dr. Billy V. Hall, who had been a mentor to all three doctors, had been previously honored as grand marshal of the Gravette Day parade in 2001. This year's theme speaks to the hope of coming out of seclusion, from behind the masks, where people can see each other and visit again, he said.

Poemoceah and his wife have served as Sunday School teachers at First Baptist Church in Centerton where he also plays clarinet in the church orchestra. He performs in the Arkansas Winds Community Concert Band and enjoys fishing and running. He officiates for the University of Arkansas track program. Watch for him in the Gravette Day 5-K.

Dr. David Tucker, a graduate of the University of Michigan Medical School, came to Gravette at the invitation of Dr. David Hall and joined the clinic staff in July of 1986. Tucker was impressed with Gravette's advanced health care facilities, particularly given the size of the town. His children, Anna, Robert and Rebecca, attended school in Gravette.

"I'm honored to represent all of the health care workers who have worked to keep people healthy during the pandemic," he said. Tucker, who encourages people to get vaccinated against covid-19, views this year's theme as representing the hope of getting back to normal. He enjoys the full Gravette Day experience, especially seeing old friends, and recalls playing in softball tournaments that were part of past Gravette Day festivities.

Tucker currently serves as chief of staff at the OCH Gravette Clinic and is the medical director at Concordia of Bella Vista. He is a member of St. Mary's Catholic Church in Siloam Springs. His hobbies include gardening, watching sports and going to ballgames with his children and grandchildren.

The parade begins at noon at the corner of Charlotte Street S.E. and Highway 59, travels north on Highway 59 and turns east on Main Street, then south on Sixth Avenue S.E. back to Charlotte Streset S.E.