Westside Eagle Observer/MIKE ECKELS The Decatur Police Department currently occupies the house where the Decatur Telephone Company once owned. A winery occupied the basement of the old house that stood in this very spot for several decades before it was torn down to make way for the present structure.

DECATUR -- The city of Decatur was on the march with several new businesses moving into the area as well as the expansion of the Simmons dog food plant on the north end of the city. Even Simmons expanded its old processing plant in downtown Decatur. But soon the city faced yet another serious setback that threatened to close Decatur down for a second time in 60 years.

In 1949, several Decatur residents donated 10 acres of land to the Arkansas Game and Fish Commission for the creation of a fishing facility. Soon, a section of Wolf Creek was filled in with dirt to form a dam. Once completed, water from the creek began to back up and within two years gave rise to the birth of Crystal Lake. (Over the years the lake grew to 59 acres).

After Peterson reopened the poultry processing plant in 1952, the town began to grow in population. Peterson built and operated a new airport facility beside Crystal Lake on the north side of town. With the help of Ray Ellis, owner and operator of both Fayetteville Flying Service and Scheduled Skyways, and Ellis' chief pilot Jim Voth, Crystal Lake Airport began transporting baby chicks to markets around the country.

The Decatur Development Co., which eventually became the Decatur Chamber of Commerce in 1954, found a way to give the community a reward for sticking through the hard times in the early 1950s by taking an idea from Peterson in 1953.

Peterson threw a big company picnic at Decatur's City Park and invited the townspeople to the party. The party included chicken quarters provided by Peterson Industry and prepared by the cooking line, a children's pageant, parade, kids' games, and the Miss Decatur Barbecue beauty pageant. The celebration concluded with a concert by Leon McAuliffe and his band.

The chamber took over the operations of the Decatur Barbecue and over the years the small celebration outgrew City Park and 10,000 people came to see Keith Whitley in 1988. A year later, a crowd of 9,000 flooded into Decatur City Park to see Lorrie Morgan pay tribute to Whitley, who died a few months after his Decatur appearance. In 2010, the venue was moved to the new Veterans Park, which is located on Highway 102 northwest of town. With the exception of the 2020 pandemic shutdown, the Decatur Barbecue ran for 66 years. The 67th Decatur Barbecue is slated for Aug. 7 at Veterans Park.

The town's population fluctuated during the first part of the 21st century with an influx of families working at the Peterson Poultry Plant, which became Simmons for the second time in Decatur history. This flux stagnated the town's growth and created a housing shortage. This stagnation ran through 2014. Decatur had no grocery store, no hardware store and only a handful of businesses including three convenience stores, a meat market and a cafe. The town needed more.

Bob Tharp, who became mayor of Decatur in 2015, began an aggressive campaign to bring businesses to Decatur. With the help of former Mayor Charles Linam and the Decatur City Council, Tharp caught the interest of Walmart, which purchased the old Decatur Mercantile building and opened a Neighborhood Market Express on Jan. 30, 2015. At last those Decatur residents had a place to shop where they did not have to travel to Siloam Springs or Bentonville for the goods they needed. But this marriage between Decatur and Walmart would not last.

Less than a year later on Jan. 28, 2016, Walmart closed four of its Express stores, including the one in Decatur. Now the city suffered a setback. For the next year, residents went to the mayor and city council for a replacement. Tharp traveled to Tennessee to talk to Dollar General about opening a grocery general merchandise store in the old Walmart. What was once the Decatur Mercantile became the Dollar General Express on June 2, 2017, and Decatur was never without a grocery store again.

The town was growing in population because of the influx of workers to the Decatur plant. But a change was on the horizon that threatened the very existence of Decatur.

For the second time in Decatur history, Simmons closed the doors of its Decatur facility and the town was once again left without its major industry. 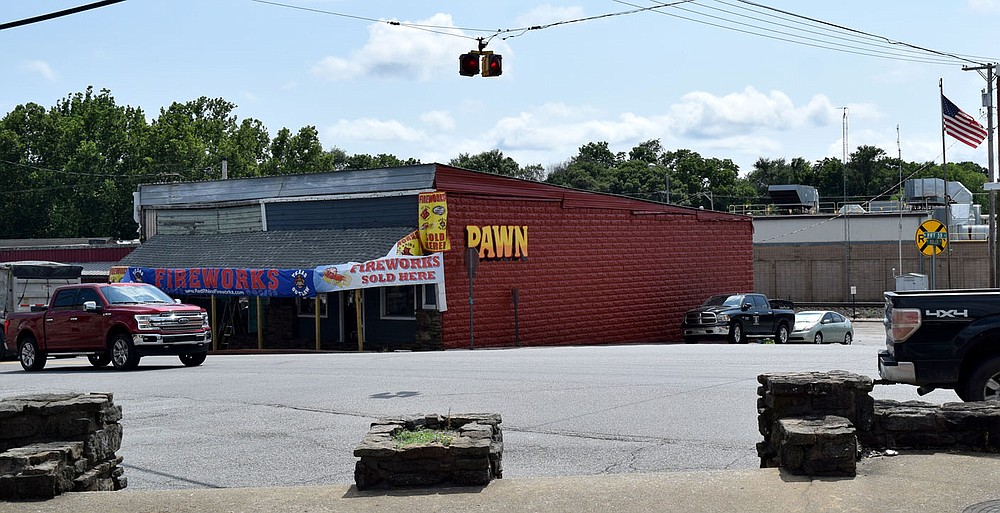 Westside Eagle Observer/MIKE ECKELS Back in the late 1800's and early 1900's, the four way stop at the corner of Main Street and Roller Avenue in Decatur use to be the town water supply. An old well dipped into a spring that ran under the city. Townsfolk flocked to the well for their source of water. The old well is still there buried under the asphalt streets that make up the intersection.