Where to build the new bleachers? 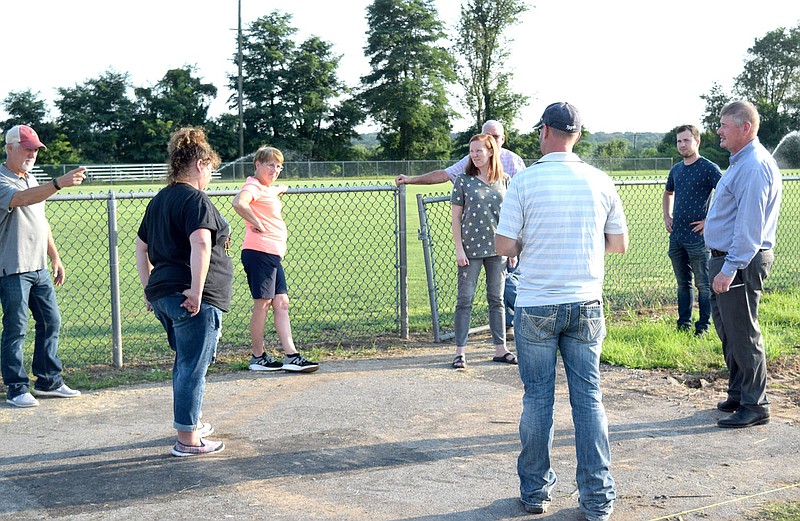 Westside Eagle Observer/MIKE ECKELS Ike Owens (far left) points out where he thinks the new bleachers should be placed to his fellow school board members during a tour of Bulldog Stadium in Decatur July 13. The new bleachers will be placed against the fence that divides the football field and fan area.

DECATUR -- With the dismantling of the old blue bleachers at Bulldog Stadium and material hauled away by Midwest Structural Components, the Decatur School Board turned its attention to the placement of the aluminum bleachers.

After touring the progress of the Decatur High School renovation project, the school board walked to Bulldog Stadium to get an idea of how the new bleachers the school acquired from Farmington School District would be laid out to best serve the fans of Decatur eight-man football and soccer.

The new stands are a little wider than the old blue set, which means the fans as well as the press box would be farther back. This was just one of the many concerns the board was facing when deciding where the bleacher will sit.

"It is very important to get the placement of these bleachers right the first time," said board president Kevin Smith. "We don't want the expense of moving these a second time."

Smith, who has seen the bleachers in the old Cardinal Stadium in Farmington, told his fellow board members that the front walkway is about double that of the old set so the first row would set back farther if the new bleachers are placed in the old location. Smith suggested that the front rail and walkway which stands higher than the current fence that separates the football field from the fan area be placed against the fence.

Enter in a two lane practice track into the equation and the problem of placement gets more complicated.

One idea was to put the track where the old gap between the fence and bleachers were. Smith was quick to point out that putting the track there opened it up to undue wear and tear on the surface as people walk, spill liquids and drop food

all up and down the track.

This would also mean that the bleachers would have to be pushed farther north, taking fans father away from the action on the field. Finally the board took the track out of the equitation and continued with the problem of the best place to set the bleachers.

One suggestion was to move the fence closer to the soccer sideline and put the bleachers up against it. This would not hurt the football players on the sideline but it would cramp the soccer players against their sideline.

Finally after about 30 minutes of discussion in the board room at Decatur Middle School, the board voted to take Smith's recommendation and put the bleachers against the current fence line.

Once this was decided, work on the concrete pad and bleacher footings began on July 14. 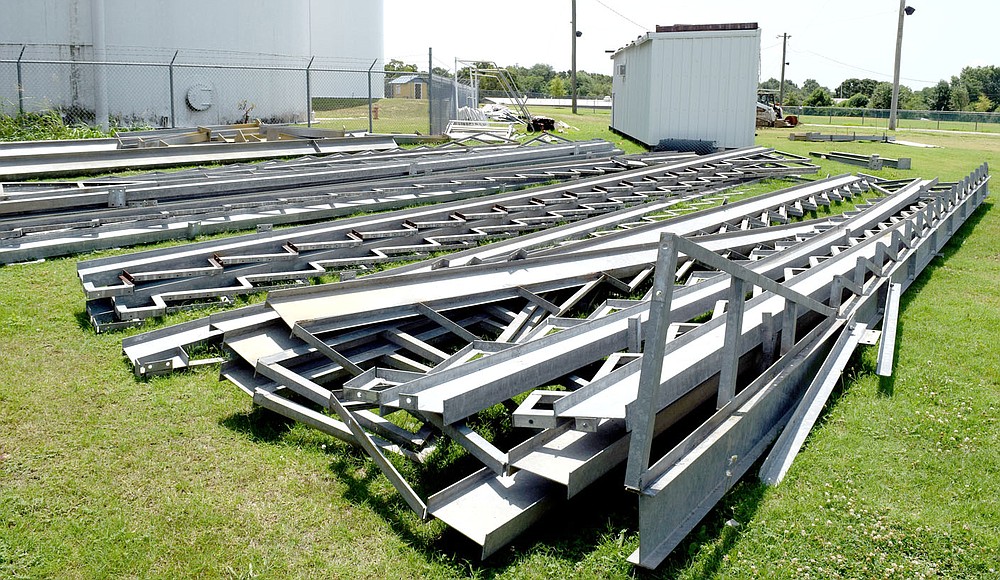 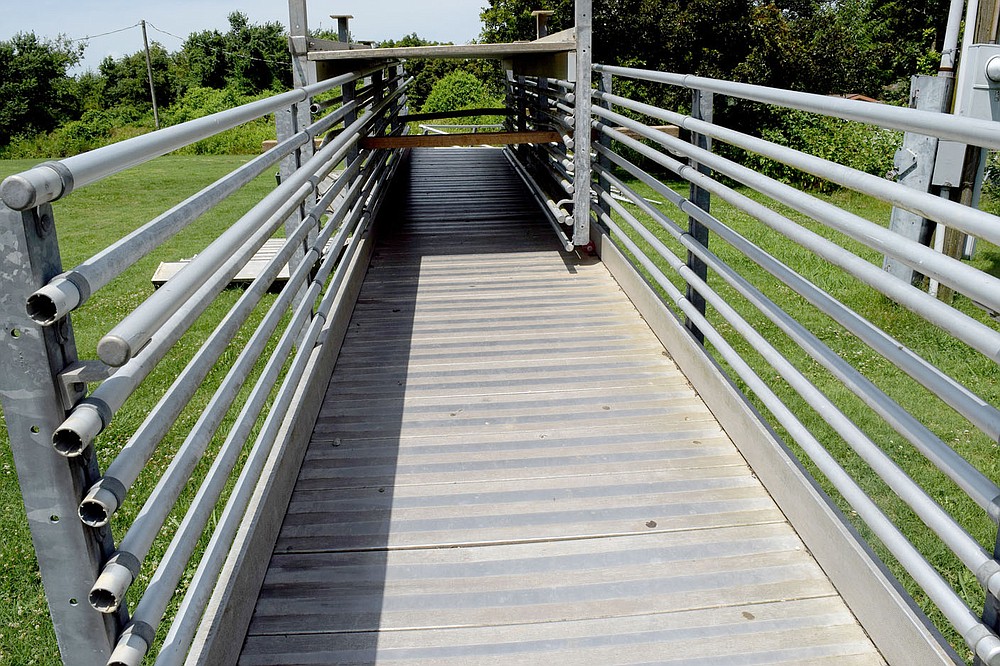 Westside Eagle Observer/MIKE ECKELS One short piece of the metal ramp sits atop a longer piece as both await the final placement at its new home at Bulldog Stadium in Decatur July 14. The new aluminum bleachers, which were acquired from the Farmington School District, are expected to be complete and ready for the first home eight-man football contest in August. 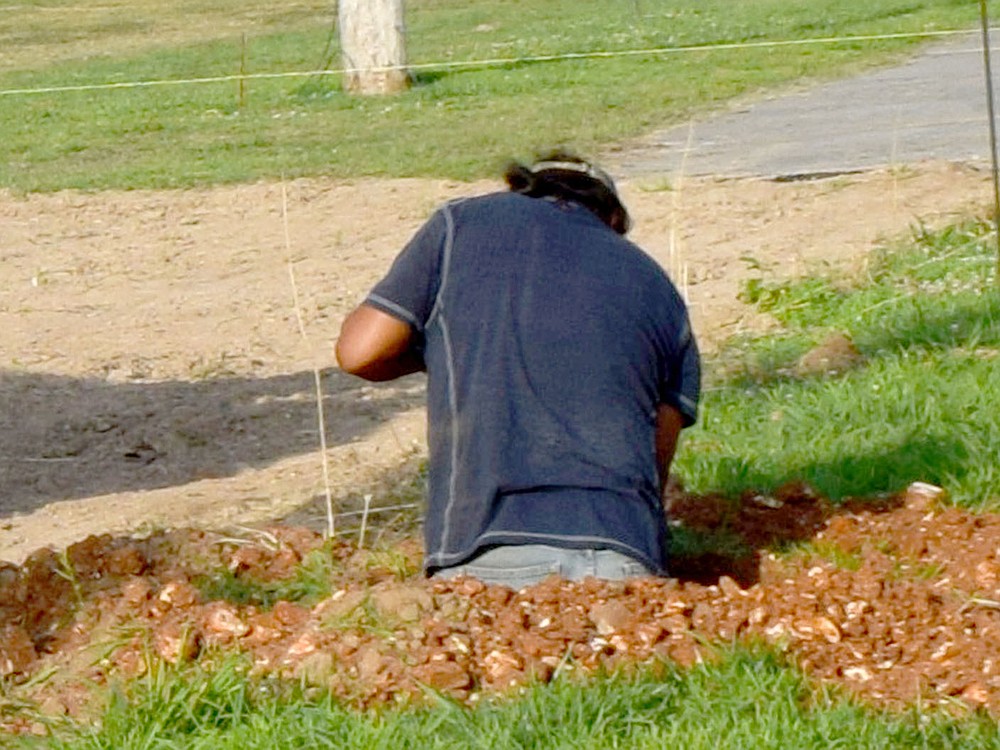 Westside Eagle Observer/MIKE ECKELS A worker, standing in a waist deep hole, cleans out loose dirt before a rebar steel frame is inserted into the opening July 14. Once the steel bars are in place, concrete will be poured to form footing pads for the new bleachers at Bulldog Stadium in Decatur.

Westside Eagle Observer/MIKE ECKELS Workers clear away dirt as a hydraulic drill attached to a Bobcat skid loader digs holes for the footing for the new bleachers at Bulldog Stadium in Decatur July 14.

Print Headline: Where to build the new bleachers?