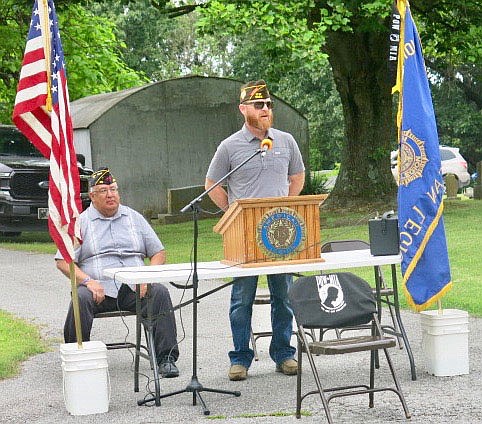 Westside Eagle Observer/SUSAN HOLLAND Matt McClain, of Gravette, Air Force veteran and member of the Howard-Parrish VFW Post 9835, speaks to the crowd at Memorial Day services Monday, May 31, at Hillcrest Cemetery. McClain was crew chief of the USAF Viper West aerobatic flight demonstration team and responsible for maintenance on the F-16s flown in their shows.

GRAVETTE -- The air was crisp and cool on Monday morning, May 31, but the chilly weather did not prevent several area residents from coming out for the annual Memorial Day observance at Hillcrest Cemetery. The event, sponsored each year by the John E. Tracy Post 25 American Legion, was not held last year because of covid restrictions so several expressed appreciation that it was on the calendar for 2021.

Jheri Roberts, pastor of the Bethlehem Baptist Church in Centerton and a member of Post 25, gave the invocation to open the service. He prayed for those everywhere, "from the hallowed ground at Arlington, to Flanders Field, to Hillcrest," who were gathered today around the world at such observances.

Mark Russow, post vice-commander, placed the POW/MIA banner on the back of the empty chair always present at post meetings as Roberts explained its significance. Members of the Old Town String Band then played the "Star-Spangled Banner," and Mike Carnahan, post adjutant, and Darrell Mercer, second vice-president, raised the flag of the United States of America to the top of the flagpole. After the flag was raised, Roberts asked everyone to look around them at the new flagpoles recently placed at the cemetery and said they were the result of generous donations from several contributors.

Matt McClain, of Gravette, was the speaker for the morning ceremony. McClain, a 1999 graduate of Decatur High School, joined the Air Force soon after graduation. He spent nine years in the Air Force, during which time he was a crew chief for the Viper West air show team and responsible for maintenance on the F-16 airplanes which are flown in their shows. McClain also spent 13 months in South Korea. He is a member of the Howard Parrish VFW Post in Decatur.

McClain began by saying the day's gathering was to honor and memorialize those service veterans who gave their lives in the service of their country.

"We get to observe this day because someone's husband, father, son, wife, mother, daughter, brother or sister didn't come home," he reminded those present. "We honor all veterans, of course," he said, "but especially those who made the ultimate sacrifice."

McClain gave a brief history of Memorial Day, noting the name changed from Decoration Day to Memorial Day, and said it officially became a federal holiday in 1971. He went on to note that 3 p.m. on Memorial Day has been designated as the National Moment of Remembrance, in which we pause to remember and honor all 1,304,684 fallen United States veterans. He urged everyone listening to observe it at 3 p.m. that afternoon and remember that freedom isn't free.

McClain concluded his talk with a quote from the first Memorial Day observance May 30, 1868, at Arlington National Cemetery: "Let no neglect, no ravages of time, testify to the present or to the coming generations that we have forgotten as a people the cost of a free and undivided republic." Those words were spoken by Major General John Logan.

The Old Town String Band closed the program by playing "America the Beautiful." Then, the audience stood at attention as the poignant strains of "Taps" echoed across the cemetery.

Pastor Roberts gave the closing prayer, thanking God for the opportunity to hold such services through the sacrifice of those fallen service members and praying for the continued protection of those still in the military. "Every day should be Memorial Day," he concluded. 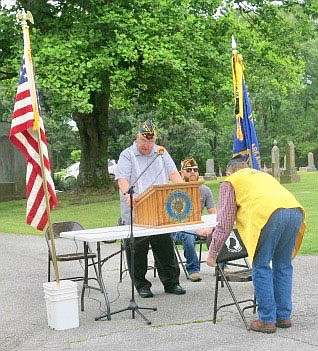 Westside Eagle Observer/SUSAN HOLLAND Mark Russow, vice-commander of John E. Tracy American Legion Post 25 at Gravette, places the POW/MIA banner on the back of the empty chair which is a standard feature at every American Legion meeting, while post chaplain Jheri Roberts explains the significance of the tradition. 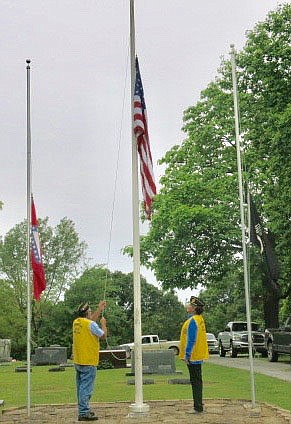 Westside Eagle Observer/SUSAN HOLLAND Mike Carnahan (right), adjutant of John E. Tracy American Legion Post 25 at Gravette, raises the flag of the United States of America while Darrell Mercer, post second vice-commander, stands at attention and salutes as the flag inches its way up the pole. The flag-raising is always a feature of the annual Memorial Day service.

Westside Eagle Observer/SUSAN HOLLAND Flags mark the graves of each veteran buried at Hillcrest Cemetery and flowers decorate the burial places of many of the fallen as one gazes across the hillside on Monday, May 31, just after the annual Memorial Day service. The flags are placed on veterans' graves by members of the John E. Tracy American Legion Post 25 in Gravette.