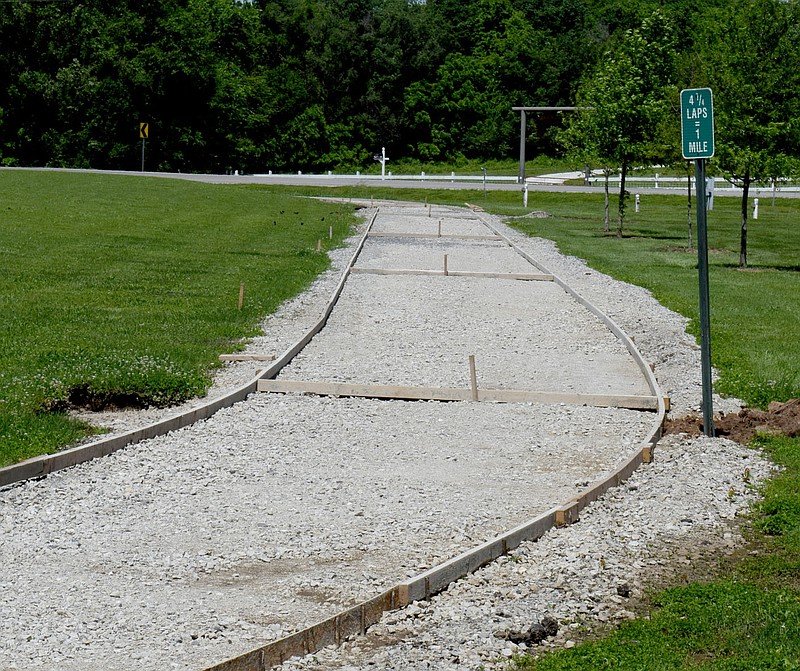 Westside Eagle Observer/MIKE ECKELS The track at Veterans Park is ready for concrete Thursday afternoon in Decatur. The Decatur City Council voted to remove the asphalt and replace it with a new concrete surface pending approval by the Highway Department. The quarter mile track is tied into the Veterans Park Walking Trail and will complete the nearly mile long loop.

DECATUR -- During a special session on May 29, the Decatur City Council decided to make a change to the Veterans Park Walking Trail plans that would add a little more beauty to the project.

Mayor Bob Tharp called the meeting to present a change to the construction plans of the current asphalt track that rings the old soccer practice field near the veterans memorial.

Change order number two calls for the removal of all the existing asphalt from the track and replacing it with concrete. This change will enable Decatur residents to use just the track for short exercise workouts instead of the trail.

The original plan was to tie the walking trail into the east side of the track and leave the existing asphalt alone. However, after inspecting the asphalt that was removed from the project, the city decided that the existing surface needed to be replaced.

After reviewing photographs taken of the site and the old materials, the council voted to accept change order two.

The original plans for the Veterans Park Walking Trail called for a 0.71-mile concrete trail to encompass most of the perimeter of the park.

With the addition of the resurfaced track, the trail will be closer to the one-mile mark.

The main trail is expected to be open by mid-June with the change order two section to be complete by the end of July, barring any further weather delays.

The completion of the Veterans Park Walking Trail will be the end of a six-year saga for Mayor Tharp and the Decatur City Council which began in early 2015. After several unsuccessful grant application attempts with Blue Cross-Blue Shield's Blue and You grant program, the city was able to apply for and eventually approved for the TAP grant from the ARDOT.

When the project is compete, Decatur area residents can enjoy a beautiful and safe walk down the new trail at Veterans Park. The trail itself is 3,750 feet or .71 miles long. The track is 1,282 feet or .24 miles long. Residents that want to walk a mile can use the full loop and one circuit around the track for a total of .95 miles. Should people desire to use the track only, four and a quarter circuits equal one mile.

The city of Decatur is looking at a possible grand opening of the Veterans Park Walking Trail but nothing is yet scheduled. 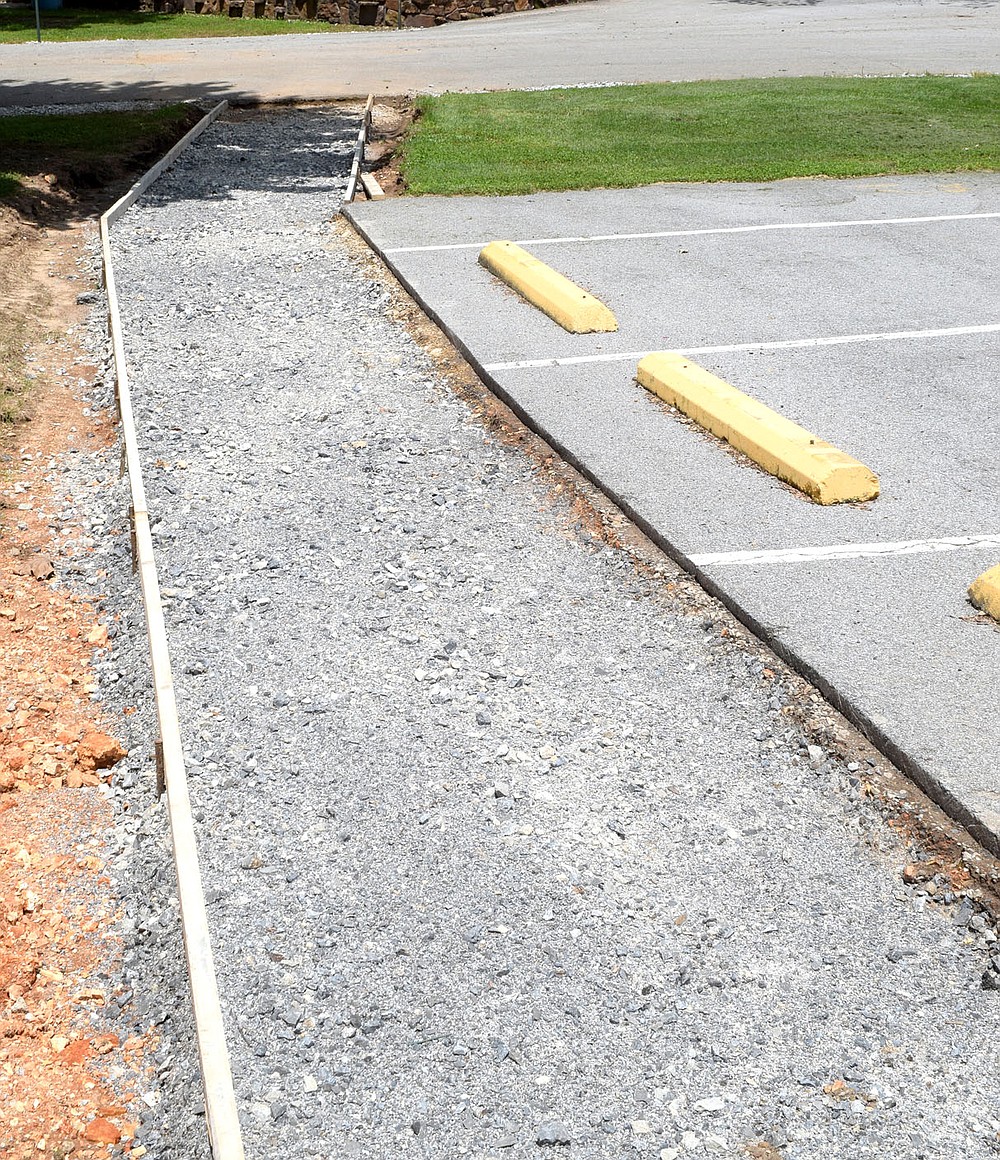 Westside Eagle Observer/MIKE ECKELS A new sidewalk leading from the Bunker to Pat Streets awaits concrete fill at Veteran Park in Decatur Thursday afternoon. Once this walkway is complete it will provide better handicap accessibility to the Bunker during events such as the Decatur Barbecue. 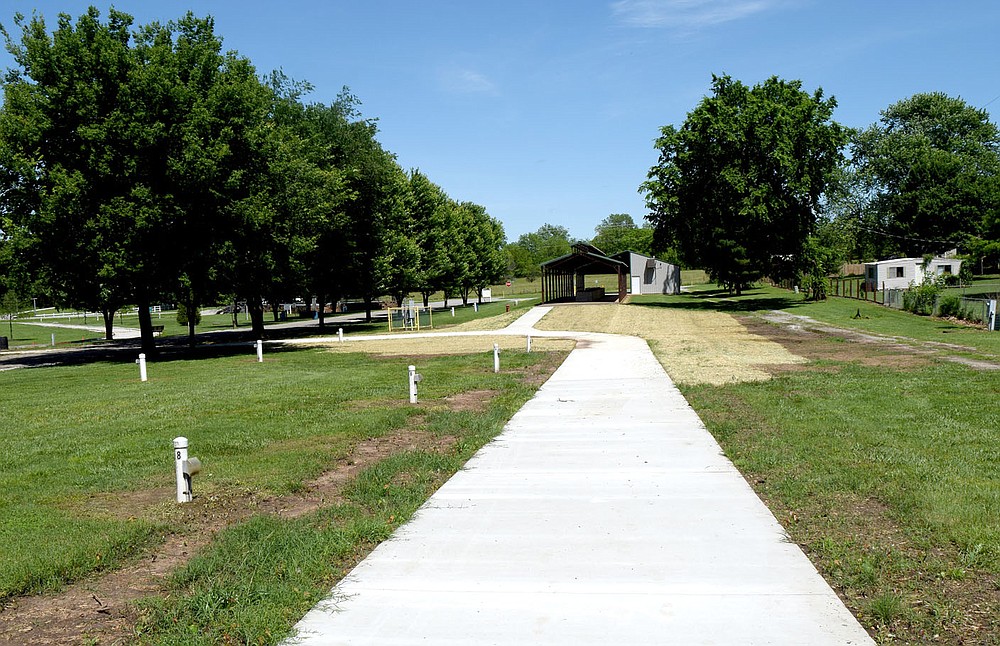 Westside Eagle Observer/MIKE ECKELS Part of the new Veterans Park Walking Trail is ready for use May 28. This section of trail ties the western part of the loop to the quarter mile track near the Veterans Memorial.
ADVERTISEMENT