Railroads set to come together in merger

Westside Eagle Observer/MIKE ECKELS During a freight run November 4, 2020, a Kansas City Southern EMD locomotive baring a tribute to the railroads many workers and its Mexican partners, passes through Decatur on its way south. The KCS operation not just in the United States but also in Mexico and Panama.

DECATUR -- With the impending merger of two major railroads, the transportation industry will gain a system that will eventually cover North America from Canada to Mexico and Panama in Central America. One of these railroads served the Gravette, Decatur, Gentry and Siloam Springs area for well over 100 years.

As the KCPG continued its march to the south, the company becomes the Kansas City Southern Railway (KCS) in 1900. The KCS completed its route to Port Arthur, Texas, which was named after Stilwell.

In 1940, KCS opened up passenger service on this new route with the premiere of the Southern Bell, which offered service between Kansas City and New Orleans. The Bell ran two day trains, one south and one north, and two night trains, one in each direction. This service covered Sulphur Springs, Gravette, Decatur, Gentry and Siloam Springs and points into Oklahoma and Louisiana.

In 1951, KCS decided to discontinued steam locomotives on the Southern Bell, switching to the more efficient Diesel-Electric EMD 7 series locomotives. The Southern Bell passenger train made its final runs between New Orleans and Kansas City on Nov. 3, 1969. The railroad could no longer compete with the growing airline industry and the expanding network of inner-state highways across the country.

Like the 134-year-old Kansas City Southern Railway, the Canadian National Railroad celebrated a long history of service to patrons from coast to coast in Canada.

On June 6, 1919, the Canadian National Railroad was created by an Act of Parliament to bolster the Canadian economy.

"CN is a world-class transportation leader and trade-enabler. Essential to the economy, to the customers, and to the communities it serves, CN safely transports more than 300 million tons of natural resources, manufactured products, and finished goods throughout North America every year.

"As the only railroad connecting Canada's Eastern and Western coasts with the U.S. South through a 19,500-mile rail network, CN and its affiliates have been contributing to community prosperity and sustainable trade since 1919. CN is committed to programs supporting social responsibility and environmental stewardship" (May 26, 2021, CN/KSC press release).

In the coming months, area residents may start to see locomotives baring a red and black paint scheme and the familiar CN logo on the front and sides of the engines. This is the mark of the Canadian National Railroad, and it joins forces with the Kansas City Southern to move freight across the vast expanse of North America. 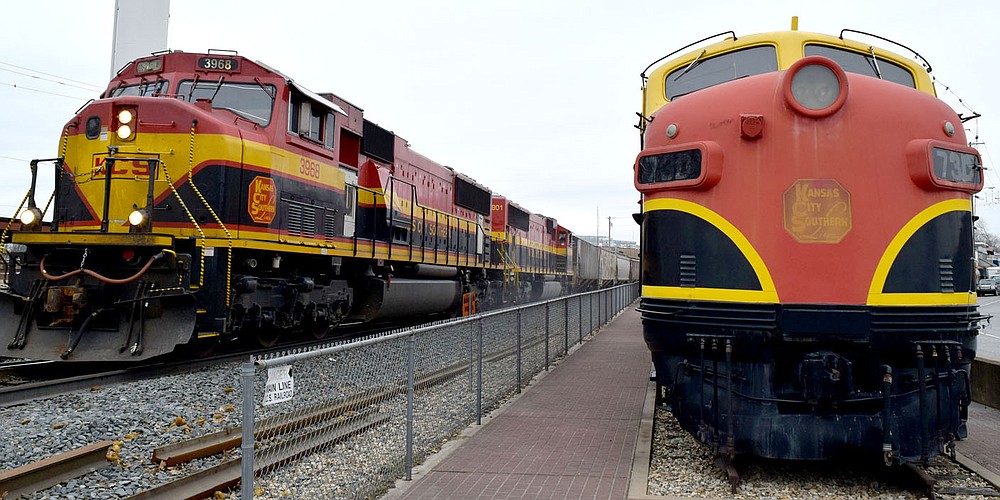 Westside Eagle Observer/MIKE ECKELS The old and the fairly new. A Kansas City Southern EMD SD70MAC (left), built in 2000 powers past a 1950 EMD F7A locomotive on permeant display at the depot in Decatur January 26, 2018. The history of the Kansas City Railroad dated to 1887 when Arthur Stillwell founded the Kansas City Suburban Belt Railway.
ADVERTISEMENT