Bleachers for Bulldog Stadium get board OK 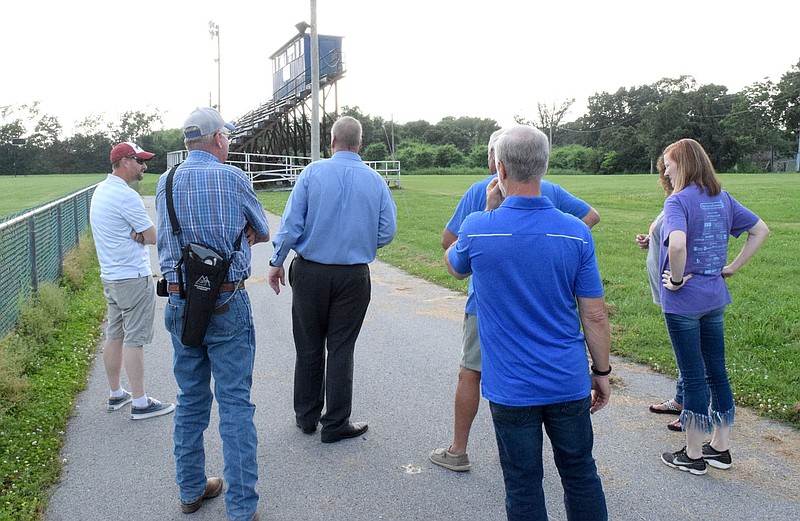 Westside Eagle Observer/MIKE ECKELS With the old set of stands and press box in the background, the Decatur school board survey the area for a new set of bleachers from the Farmington School District. The board approved the purchase during a special board meeting June 9.

DECATUR -- Good news for Decatur Bulldog football and soccer fans came during a special meeting of the Decatur school board. The board voted to get new bleachers for Bulldog Stadium and replace the aging, worn-out set on the north side of the facility.

The board, led by Steve Watkins, superintendent, and track coach Shane Holland, walked over to the stadium to inspect the old bleachers and hear plans for a new set of bleachers which will be purchased from Farmington School District and transferred to Decatur.

In late 2019, Watkins found out that the aluminum bleachers and press box were available for purchase and he began pursuing the cost of removing the old set and relocating the new Farmington set.

He reported to the board that it would cost a total of $3,800 to tear down and recycle the old set and around $90,000 to move and rebuild the new set at Bulldog Stadium. This included a concrete pad foundation.

The new bleachers nearly double the current capacity of the old set and would require relocating two light poles.

With the new bleachers comes the question of what to do with the football/soccer field and the possibility of building a new eight-lane track at Bulldog Stadium.

The track and field program is one of the most successful sports programs at Decatur High School, with Holland bringing home two back-to-back 1A state girls track championships, as well as having several past individual state championships from athletes such as Desi Meek, Destiny Mejia, Evan Owens, Bracy Owens and Ryan Shaffer.

In addition to the senior high, Holland's junior high programs have produced several back-to-back boys district championships, as well as girls championships and runner-up wins -- all this without a track at home.

So to plan for the future, Holland was asked to measure out a full eight-lane track that would surround the football and soccer field.

Board member Kevin Smith brought up the point that by mapping out a future track, they could find the best place to set up the bleachers so as not to have to move them again.

A new track will nearly double the size of Bulldog Stadium with the west end hugging the fence along the gym parking lot. The north end would run close to the city's easement near the water tanks and also take half of the current football practice field. The west end would run along the back fence of the current property, while the south would have to claim some of the sheep and goat pasture land. All these are plans for five to ten years down the road.

Holland also presented plans for a two-lane practice track on either side of the football/soccer field. This would allow the track team a place to practice starts, run hurdles and short sprint races and would lessen travel time for the team. The track team now relies on the use of both Lion Stadium in Gravette and Pioneer Stadium in Gentry, which the track coaches and athletic directors generously allow Decatur to use.

The school district is hoping to have the new aluminum bleachers in place by the start of the 2021 eight-man football season in late August. 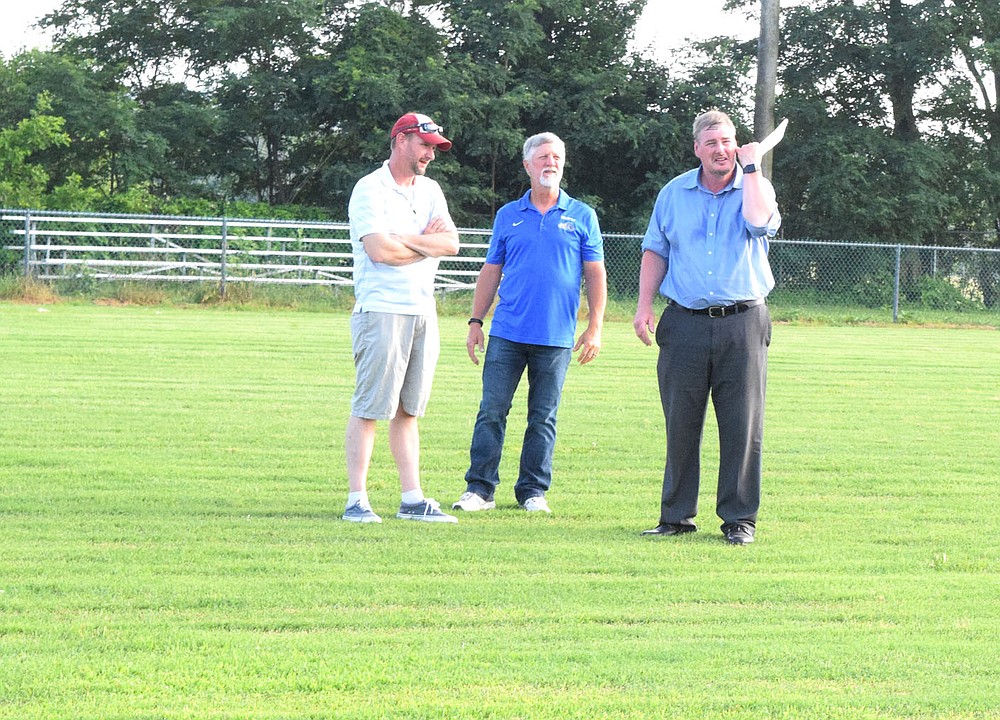 Westside Eagle Observer/MIKE ECKELS Kevin Smith (left), Ike Owens and Steve Watkins stand at midfield of Bulldog Stadium to get an idea of what the new bleachers may look like during a special school board meeting June 9. The board voted to purchase and move a new set of bleachers from old Cardinal Stadium in Farmington to Decatur, replacing the current aging stands.

Print Headline: Bleachers for Bulldog Stadium get board OK