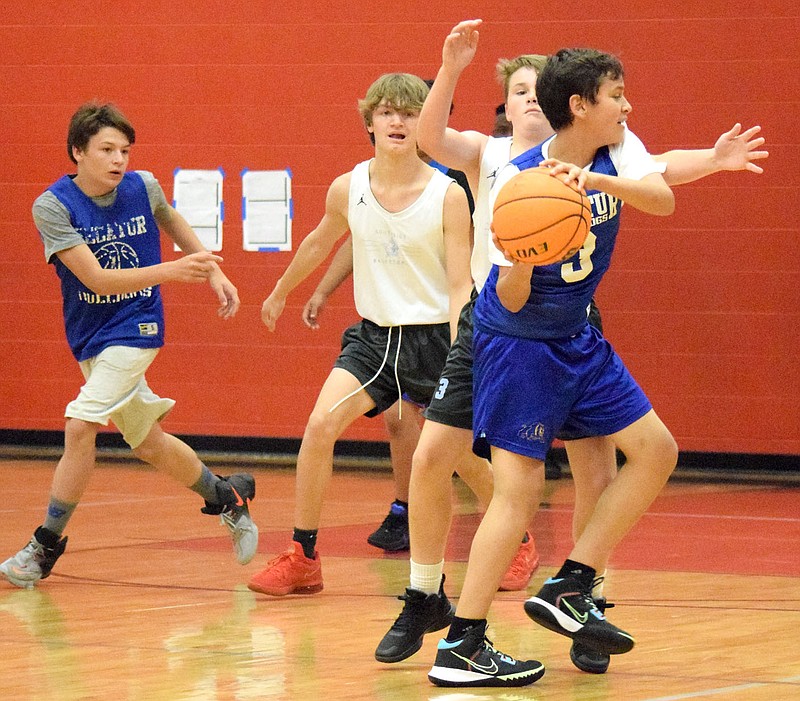 Westside Eagle Observer/MIKE ECKELS Bulldog Giovani Puga (right) tries to drive around a Maverick defender as Jason Bruffett move in to help during the Decatur-Southside junior high team camp basketball game at the Arkansas Athletics Outreach facility in Fayetteville June 8. The Mavericks, a 6A conference team, defeated the Bulldogs 26-4.

FAYETTEVILLE -- Summer vacation is a time of splashing, running, picnics in the shade and family vacations. But one local sports program took advantage of the summer break to get in a few off-season workouts and real game-time experiences before the start of the regular season in late October.

Dayton Shaw, head boys basketball coach, took advantage of a team camp at the Arkansas Athletes Outreach basketball and volleyball facility in Fayetteville June 7-8 to give both his junior high and senior high players real game experience while honing his players' skills to make them better basketball athletes.

More than 30 schools from Arkansas participated in this two-day event, including Farmington, Fayetteville, Springdale, Prairie Grove, Elkins, Eureka Springs, Fort Smith Southside and Decatur. Each team from the junior and senior high ranks played two 11-minute halves and alternated among six basketball courts in the facility. Games started at 12 p.m. and ran through 9 p.m.

On June 8, the senior high boys were pitted against some stronger teams from the 4A-6A which included Riverview, Classical Academy, Haas Hall Bentonville and Pea Ridge. Unfortunately for Bulldog fans, the senior team lost all of its games. But this camp is not about winning or losing, it's about finding the teams' strengths and weaknesses in order to work out problems in the game plans or try to improve players.

For Coach Shaw, it was a chance to see next year's sophomore players in a game setting and work on any problems they may have before the regular season begins.

Likewise, Shaw was able to put last year's sixth- and seventh-grade players in the junior high ranks with positive results.

During the final evening games for the Bulldog junior high, Decatur went up against one of its new opponents from last season, the Thaden Barnstormers from Bentonville. Decatur jumped out in front early and never looked back as the team maintained no less than a four-point lead throughout the 22-minute contest. Thaden tried to close the gap twice but the strong Decatur offense picked up the pace and began widening the scoring gap.

The Decatur junior high took the contest, 21-17, over the Thaden Barnstormers.

Next up were the Saint Joseph Catholic Panthers from Fayetteville. This team presented the Bulldogs with a little more of a challenge. The junior high Bulldogs led the Panthers by as much as six throughout the first 11-minute half. In the last three minutes, the Panthers played catch up and eventually overtook the Bulldogs to lead by as much as five points. When the final buzzer sounded, Saint Joseph Catholic took the win, 27-24.

The real challenge of the day came in the form of a team that averaged around six feet in height and was very well versed in the game of basketball.

Just before the game, both teams sat next to each other in the bleachers. One senior high player was fancy dribbling between his legs, behind his legs, all while watching the conclusion of the previous game. When asked how long he has been doing this, his reply was, "A very long time."

One of the Decatur coaches then turned to some of the Bulldog players and said, "This is exactly why Coach Shaw is trying to teach all of you what to do in practice so it becomes second nature like it is for this young man."

The team was the 6A Fort Smith Southside Mavericks, one of the best junior/senior high teams in the state last season.

Height was the big advantage for the Mavericks, and a pair of defenders towering well over six feet kept knocking down Bulldog shooting attempts. The end result? Southside took the contest, 26-4, over the junior high Bulldogs.

Earlier in the day, the junior high lost two games, one to the Harrison Goblins and the other to Haas Hall Bentonville Huskies.

The lessons learned from the Arkansas Athletics Outreach team camp will help Shaw fix any holes in the Bulldog game plan while aiding him to work with his players to draw out their strengths. The Decatur Bulldog junior and senior high basketball teams will travel to Eureka Springs on June 21 for another two-day team camp. 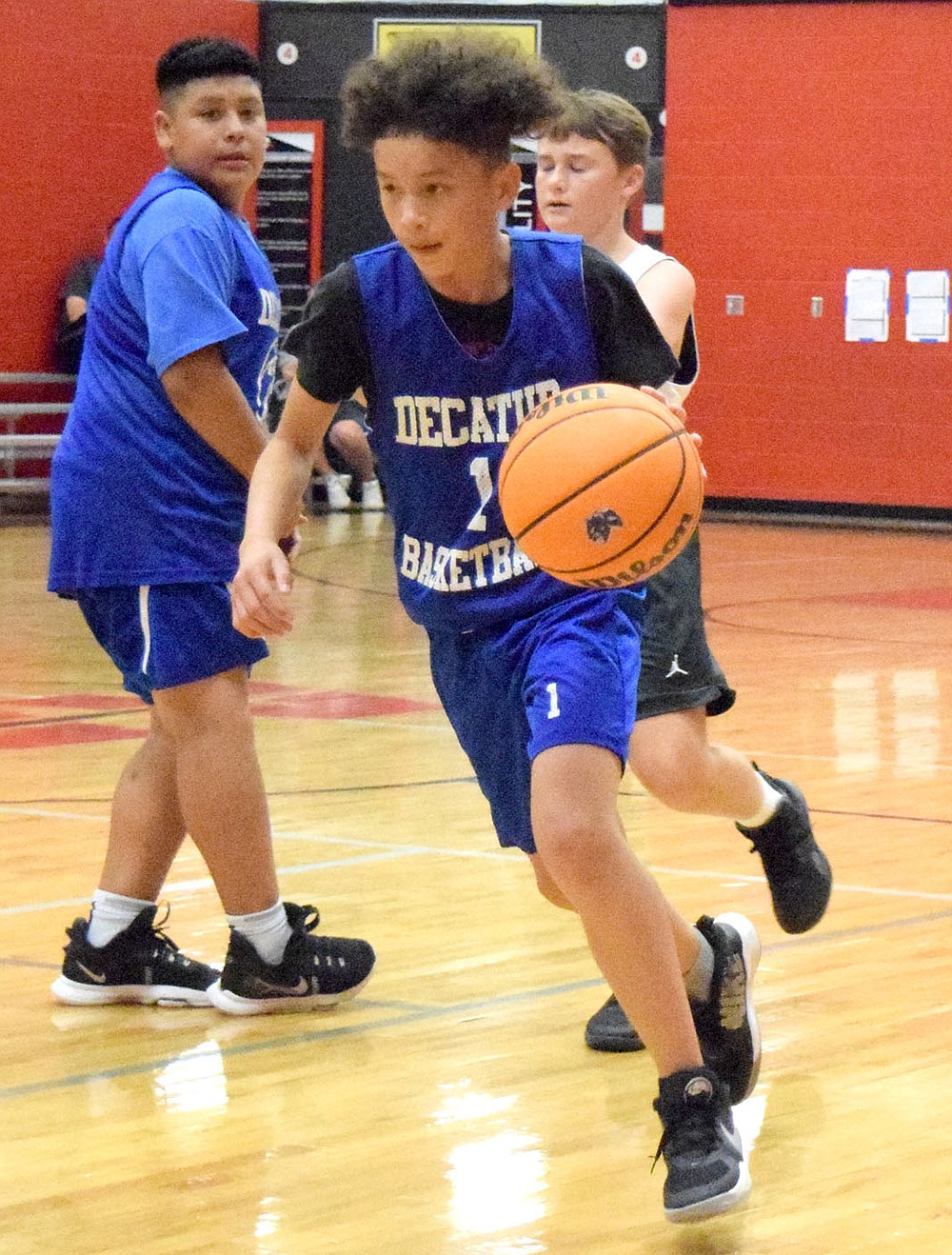 Westside Eagle Observer/MIKE ECKELS Alan Medel (left) puts up a perfect screen which allowed Ricky Thor (center) to get around a Maverick defender during the June 8 junior high contest between Decatur and Fort Smith Southside in Fayetteville. The Mavericks took the win in the Arkansas Athletics Outreach team camp 26-4 over the Bulldogs. 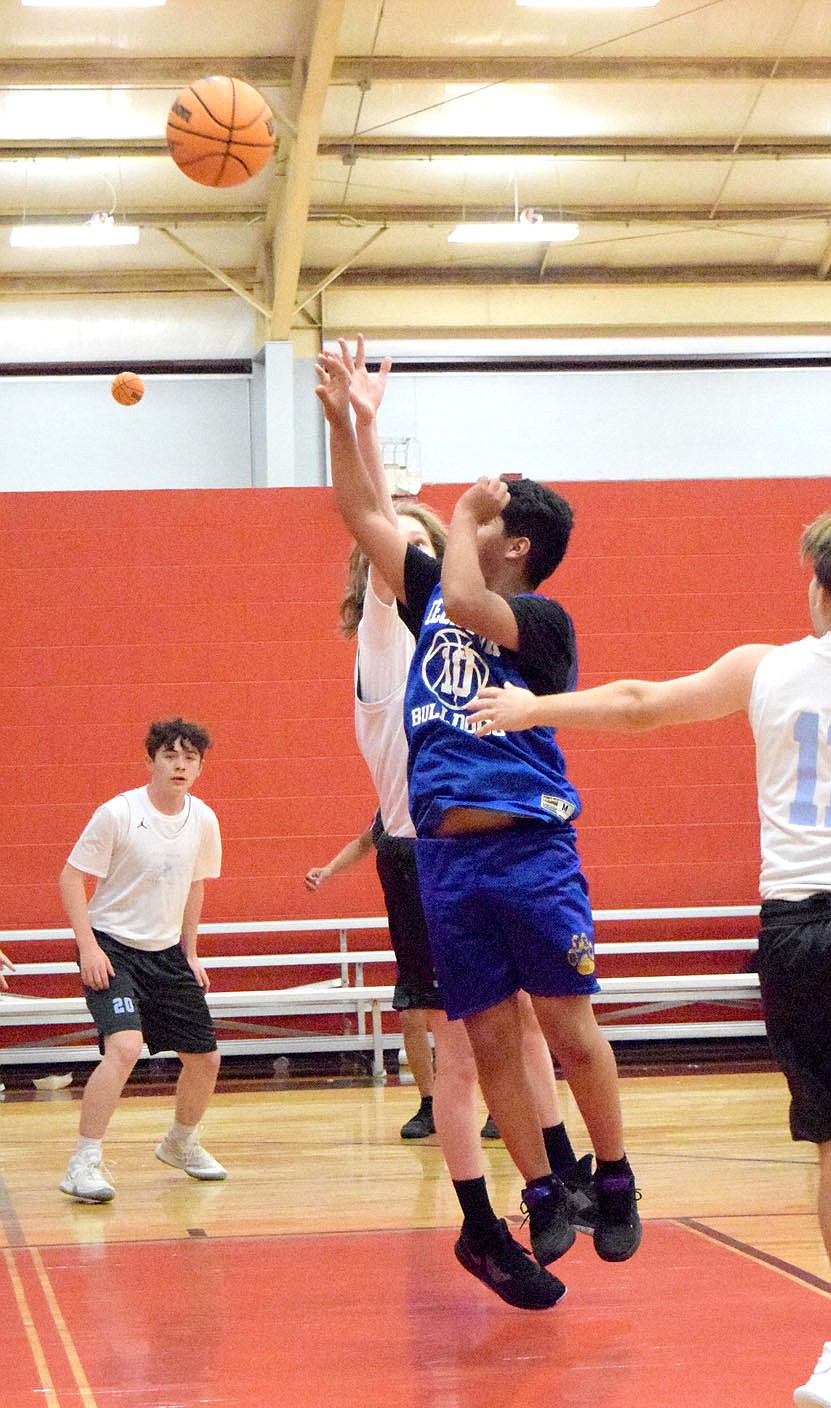 Westside Eagle Observer/MIKE ECKELS Brandon Cruz launches a jumper from inside the lane during the June 8 Decatur-Fort Smith Southside junior high basketball contest at the Arkansas Athletics Outreach gym in Fayetteville. The Mavericks took the team camp contest 26-4 over the Bulldogs. 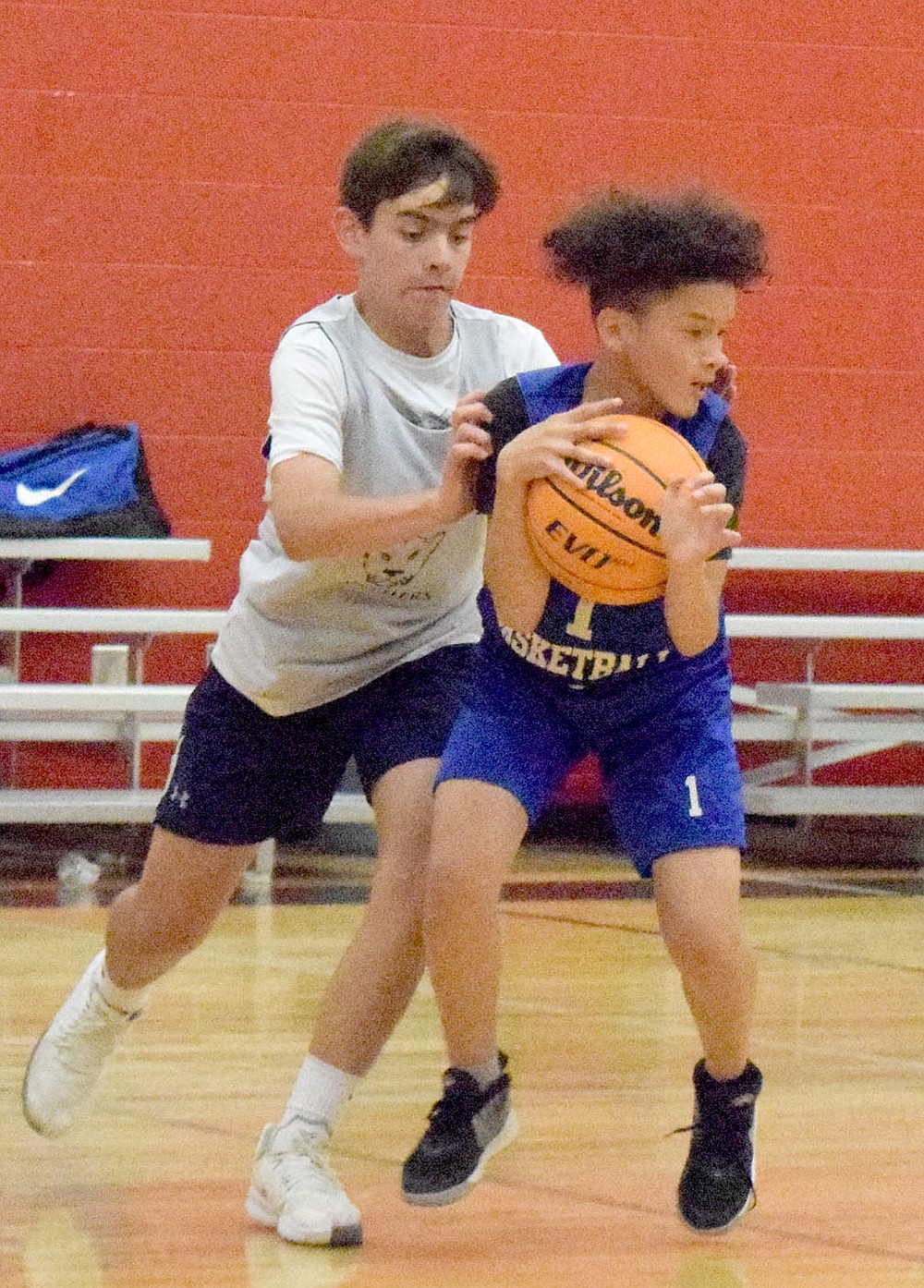 Westside Eagle Observer/MIKE ECKELS Ricky Thor (1) latches onto a loose ball and holds on, keeping it out of the reach of a Panther player during the June 8 Decatur- St. Joseph Catholic junior high basketball contest in Fayetteville. The Panthers took the win 19-15 during the Arkansas Athletics Outreach team camp. 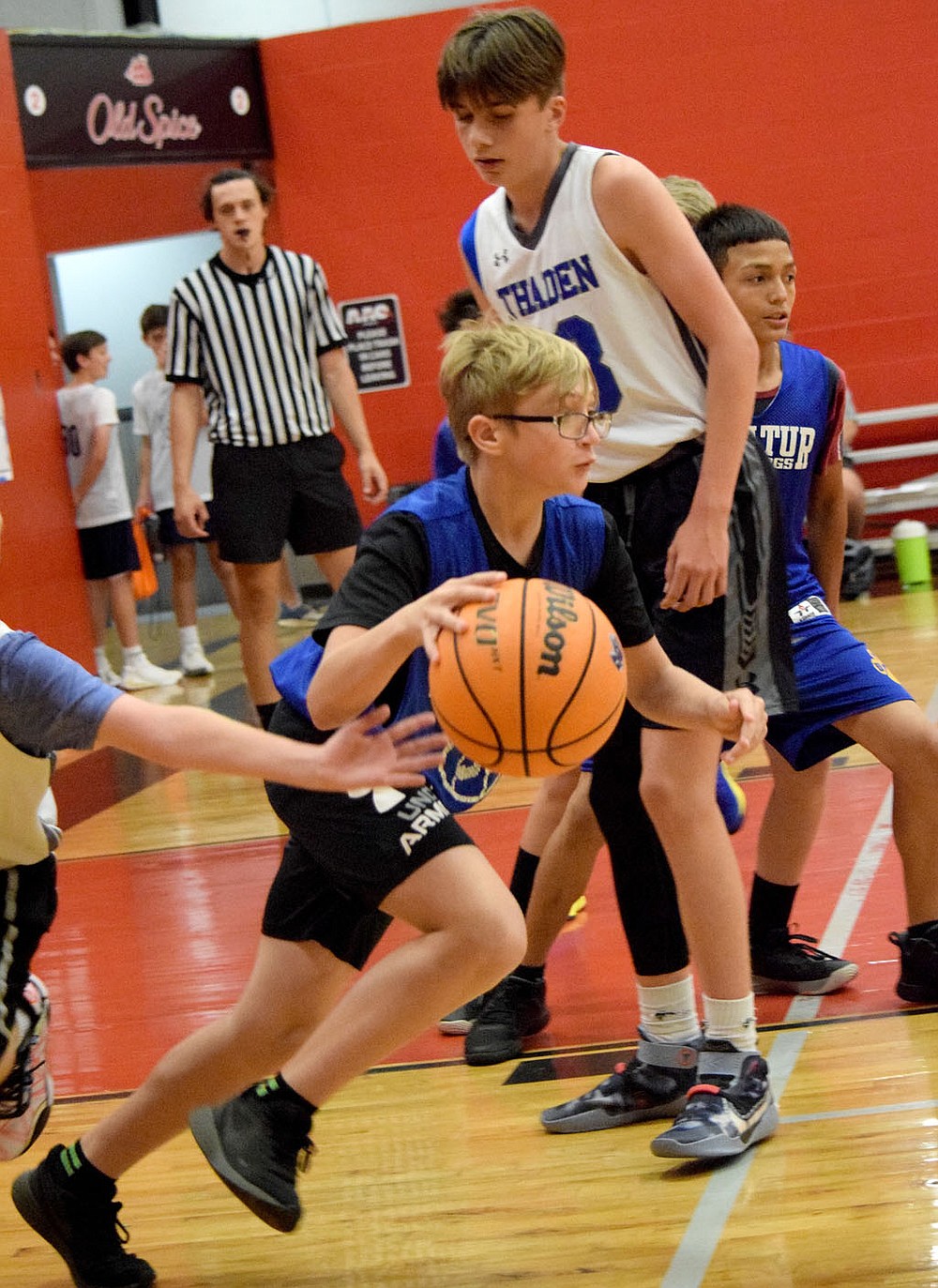 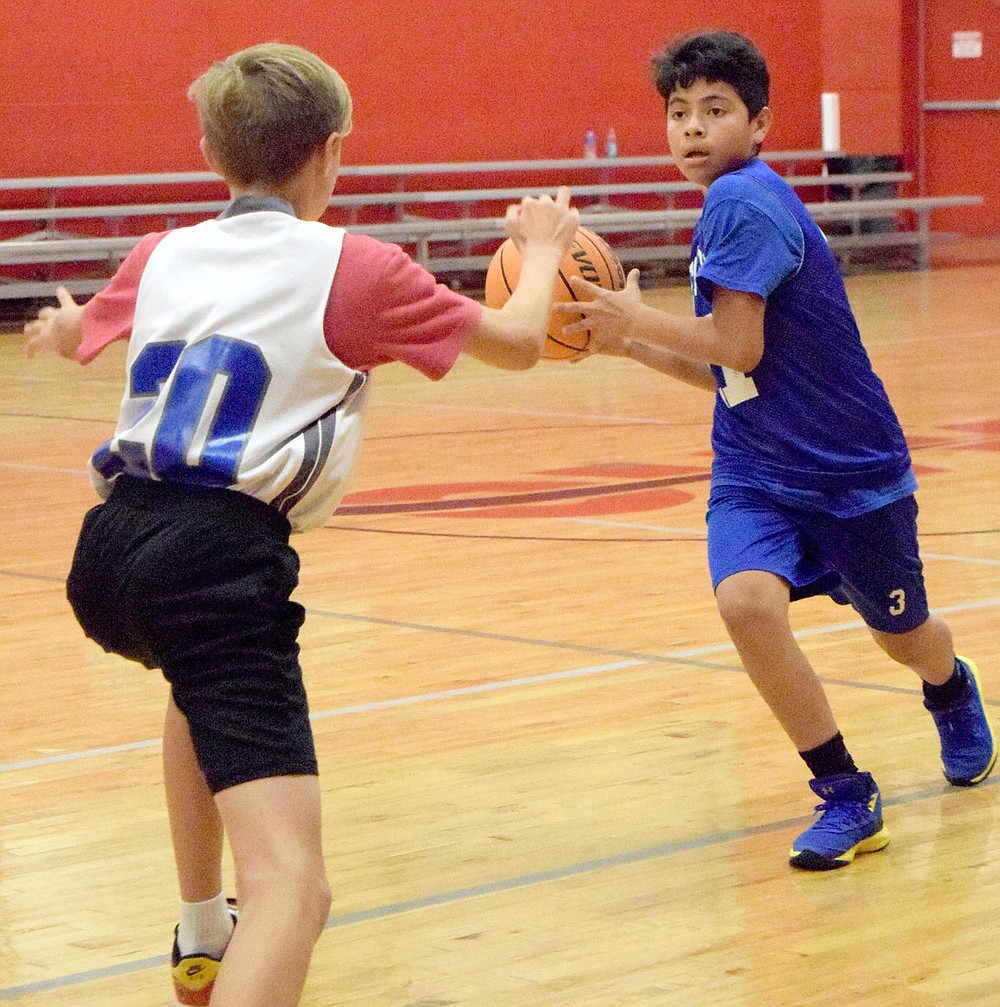 Westside Eagle Observer/MIKE ECKELS John Colorado (right) looks for a teammate to pass the ball to during the second half of the Decatur-Thaden junior high basketball game in Fayetteville June 8. The Decatur boys participated in the 2021 Arkansas Athletics Outreach team camp where the team claimed the win 21-17.