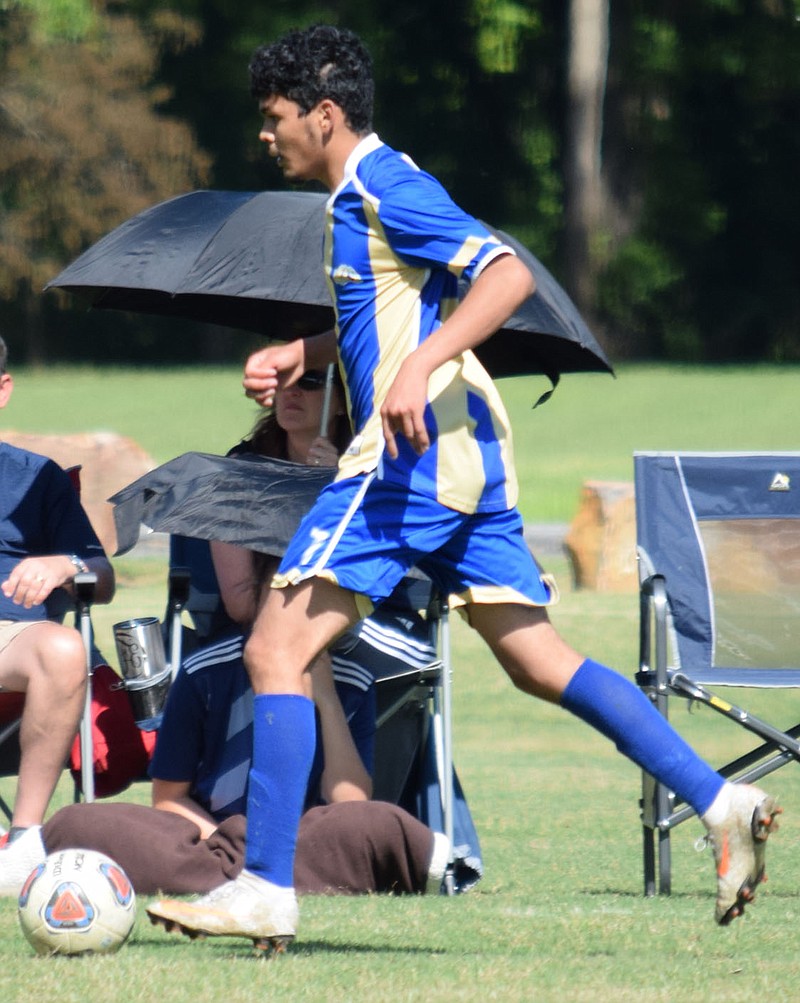 Westside Eagle Observer/MIIKE ECKELS Steven Lucero drives the ball down field on his way for an attack on the net during the first round of the 3A state soccer tournament match between the Decatur Bulldogs and the Maumelle Charter Falcon at Burns Park in North Little Rock Thursday afternoon. The Bulldogs picked up the first round win 4-2 over the Falcons to advance to the second round on Friday.

NORTH LITTLE ROCK -- There was no fanfare at Decatur High School Thursday morning when the Bulldog soccer team departed around 9:30 a.m. bound for the 3A state playoffs at Burns Park in North Little Rock.

After stopping for lunch in Russellville, the Bulldogs arrived at their destination around 2 p.m. just in time to see the Life Way Christian Lady Warriors from Centerton win their first-round match.

The Bulldogs were up against a team it never faced before, the Maumelle Charter School Falcons.

As Decatur stepped onto soccer field four, it became apparent that this match would not be easy. But the Bulldogs had other ideas and the team played with an intensity seen in several contests this season.

About three minutes into the first half, senior Steven Lucero made a run on the Falcon net. Lucero fired the ball past the Maumelle goalie and into the net for the first goal of the match, giving the Bulldogs a 1-0 lead.

Towards the end of the half, senior Roger Hernandez attacked the net from the right side and fired the ball straight into the left corner of the net for Decatur's second goal of the night.

Early in the second half, a Falcon player intentionally tripped a Decatur player, bringing up a penalty kick. This foul pitted one Bulldog against the Falcon goalie. Roger Hernandez stepped up to the line and fired the ball into the left side of the net for the Bulldog's third goal.

As time began to wind down, the Bulldogs let their guard down and the Falcons took advantage with two quick goals, cutting Decatur's lead to one.

Maumelle kept driving for the net trying for the tie. The Bulldogs finally awoke from their little nap and, thanks to great defense by Emmanuel Thao and Deegan Brooks, coupled with superior goaltending by Ben Watkins, managed to ward off each attack by the Falcons.

Carlos Hernandez put the cap on the match for the Bulldogs with a goal about two minutes from the end of the period to give the Decatur Bulldogs a first-round victory over the Maumelle Charter Falcons, 4-2.

The Bulldogs faced a tough opponent on Friday afternoon when the team returned to Burns Park to face the Harding Academy Wildcats from Searcy.

A sea of red packed the east sideline as Wildcat fans waited for the start of the contest. However, the Bulldogs were not without supporters. A few fans braved the four-hour trip to support the kids of Decatur.

Harding went on the offensive early and 35 minutes into the first half, struck gold with its first goal of the match. For the remainder of the half, the Wildcats pounded the Bulldog net and, by the halftime break, led 3-0.

Coach Daniel Meyer's halftime speech was an attempt to get his team to go back in fighting. He said, "This can be your moment if you stay with it and want it."

Both Meyer and his assistant, Grant Hudson, mapped out a new plan to attack the goal during the second half of the match. The Bulldogs returned to the field with a renewed spirit as the half began.

The Bulldogs went on the offensive several times during the half, hitting the goal's top and side rails. But the Harding Academy goalie kept the ball out of the goal.

The Wildcats put four more goals past Watkins during the final five minutes of the contest to take the second-round win, 7-0, and end the Bulldogs' 2021 season.

Prior to departure from Decatur Thursday morning, the senior members, including Carlos Hernandez, Emmanuel Thao, Rogers Hernandez, Steven Lucero, Able Gomez-Batres and Carlos Perez, were presented with signed soccer balls to commemorate their teammates and the 2021 season. 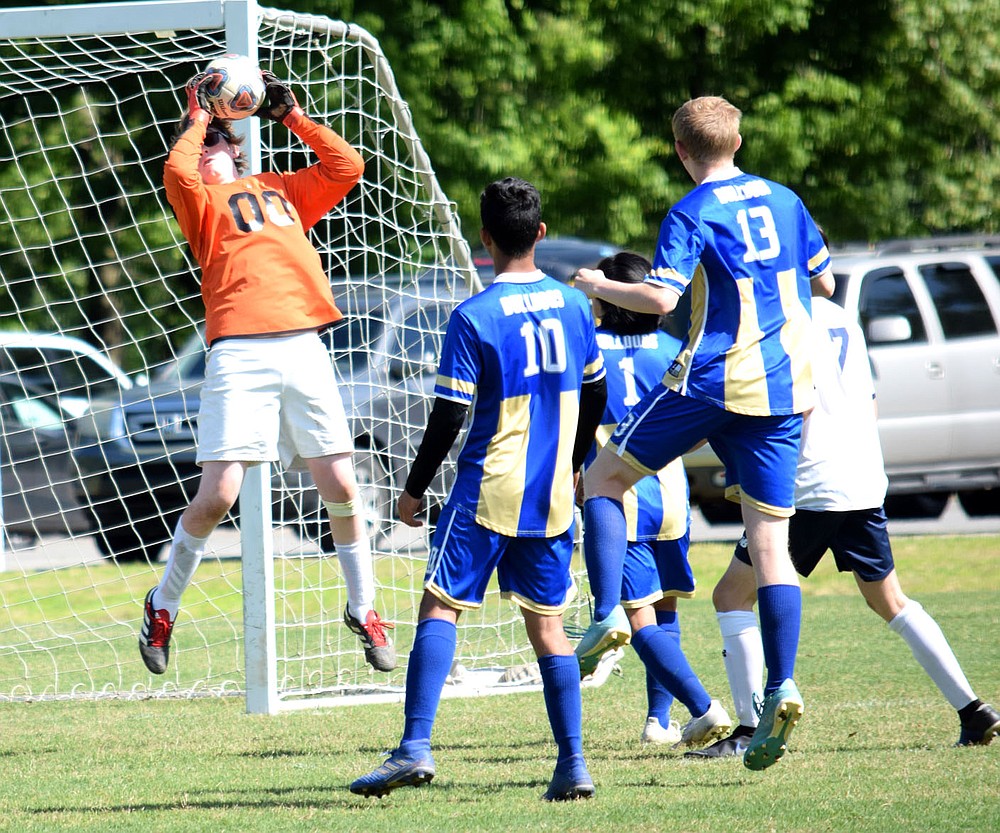 Westside Eagle Observer/MIIKE ECKELS Bulldog goalie Ben Watkins (00) pulls down a ball after a Falcon player made a run on the net during the Thursday afternoon Decatur-Maumelle Charter state playoff match at Burns Park in North Little Rock. Decatur won the first round match of the 3A state soccer playoffs 4-2 over Maumelle Charter 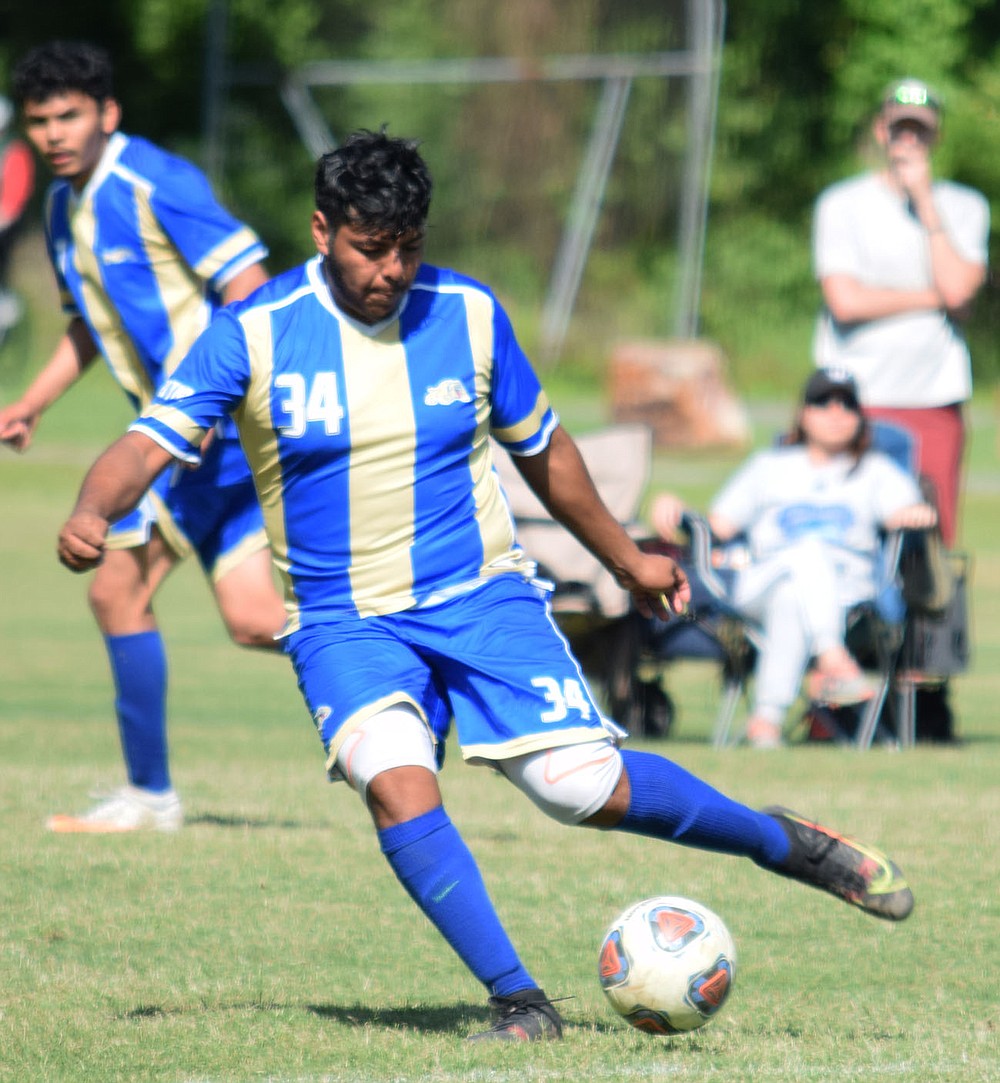 Westside Eagle Observer/MIKE ECKELS Carlos Hernandez (34) maneuvers the ball at mid-field on one of his many drives towards the net during the first round of the 3A state soccer tournament May 13 between the Decatur Bulldogs and the Maumelle Charter Falcons at Burns Park soccer field four in North Little Rock. Hernandez scored the final goal to give the Bulldogs a 4-2 win over the Falcons. 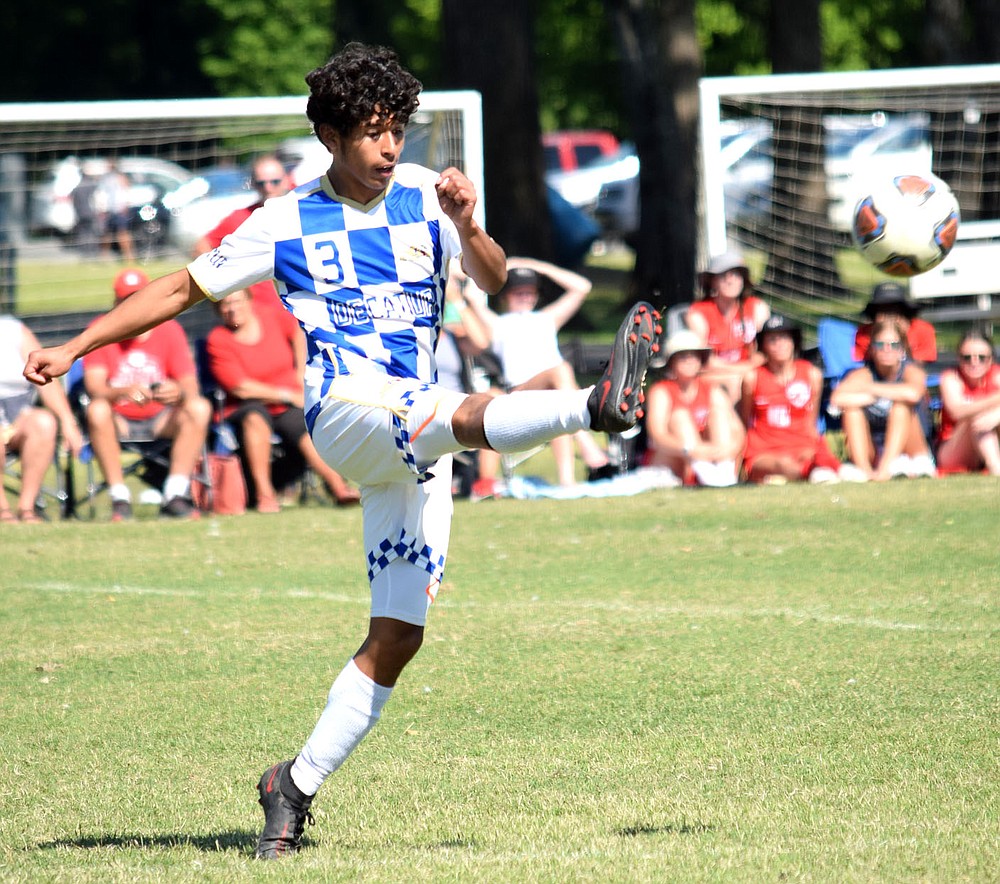 Westside Eagle Observer/MIIKE ECKELS Bryan Ruiz kicks the ball toward a team mate during the second round of the 3A state playoff match between the Harding Academy Wildcats and the Decatur Bulldogs Friday afternoon in North Little Rock. The Wildcats ended the Bulldogs 2021 season 7-0. 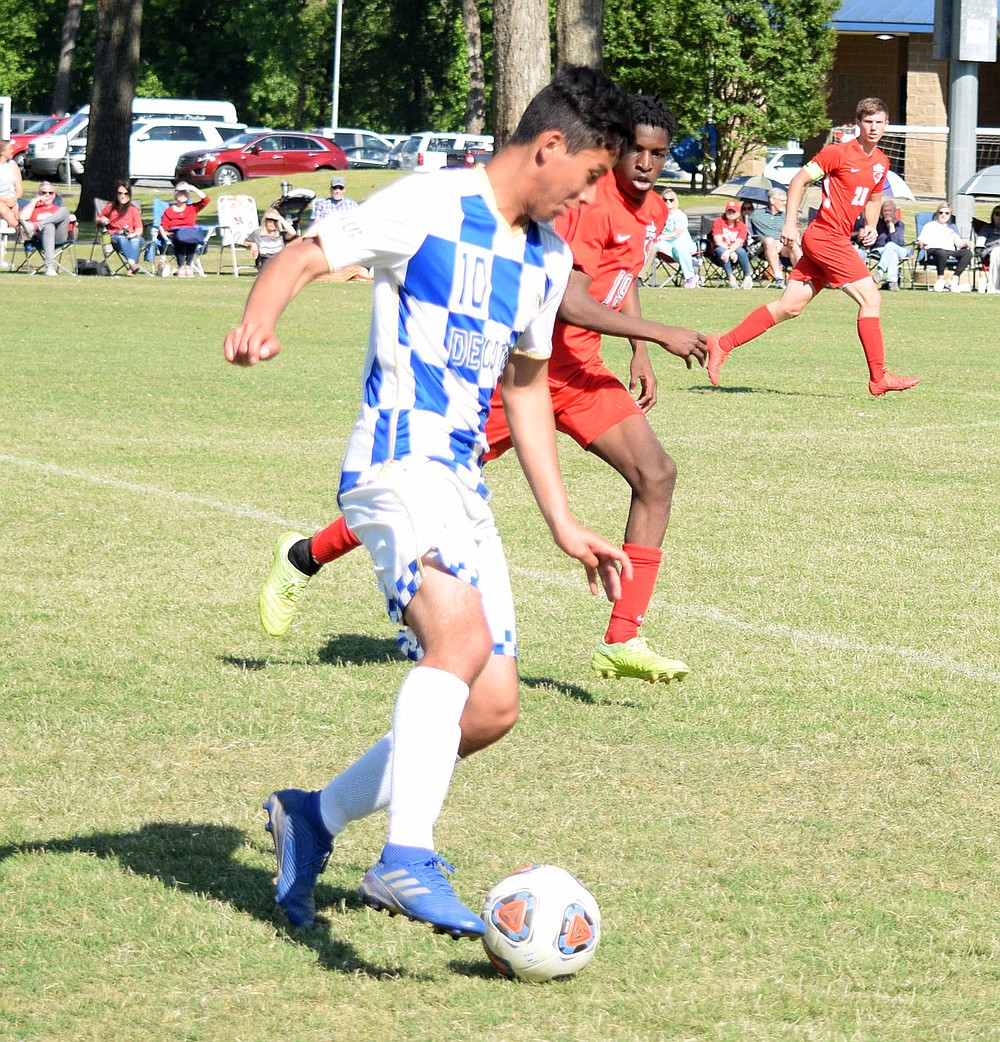 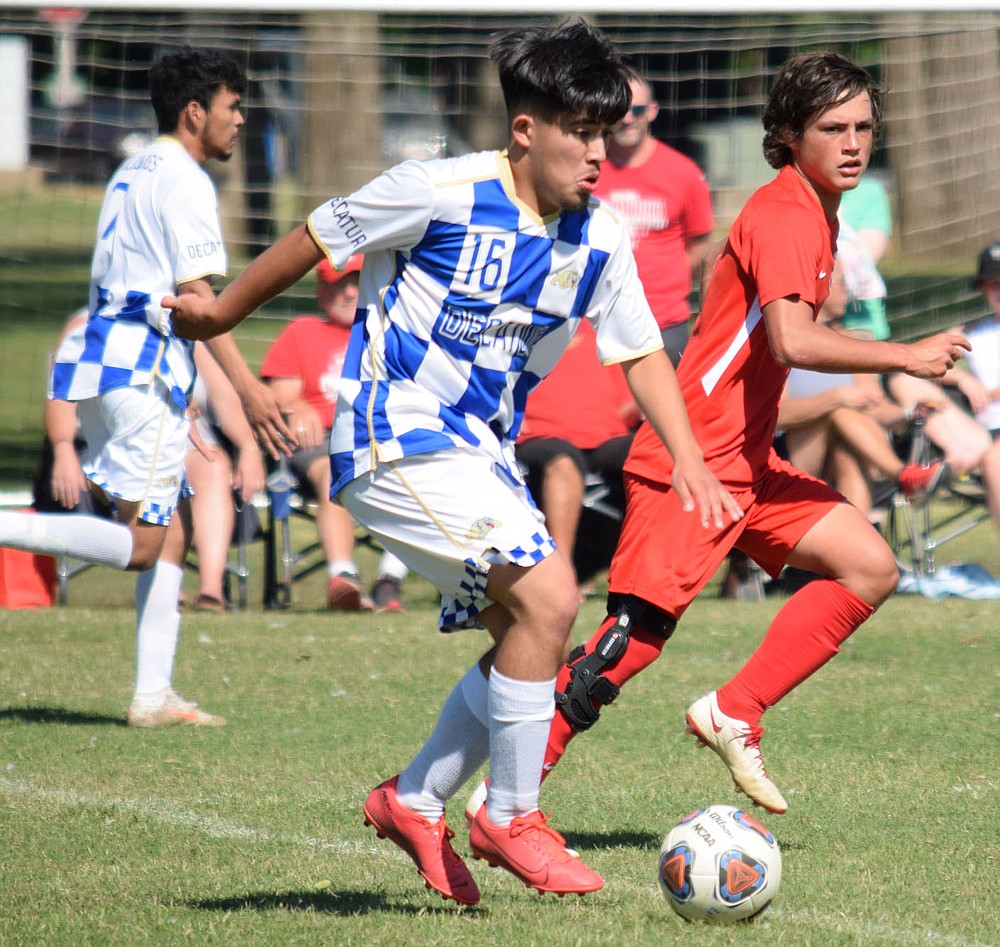 Westside Eagle Observer/MIIKE ECKELS Christian Ramirez (16) moves the ball down field away from a Wildcat player during the first half of the Harding Academy-Decatur soccer match at North Little Rock's Burns Park soccer field two Friday afternoon. The Wildcats took the second round of the 3A state playoffs win over the Bulldogs 7-0. 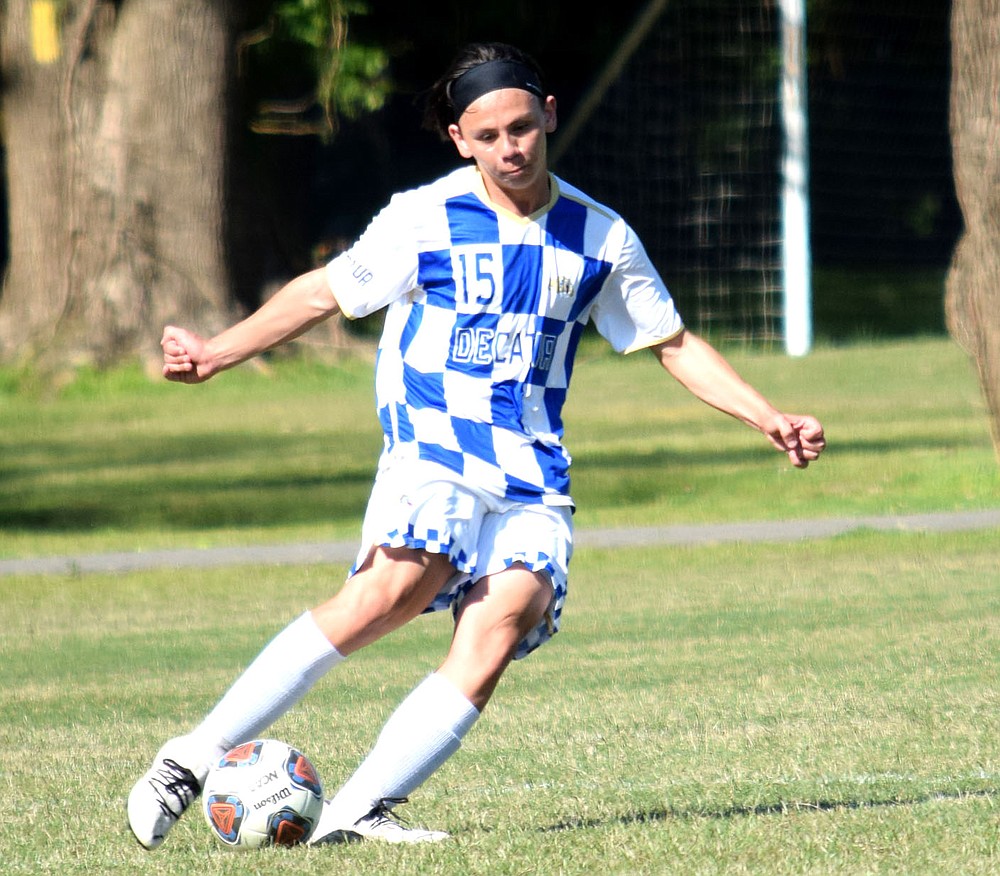 Westside Eagle Observer/MIIKE ECKELS Senior Emmanuel Thao positions the ball to clear it away from the Bulldog goal during the fist half of the Decatur-Harding Academy soccer match at Burns Park soccer field two in North Little Rock Friday afternoon. The Bulldogs lost the second round match of the 3A state playoff to Harding 7-0 thus ending Decatur's 2021 season.
ADVERTISEMENT