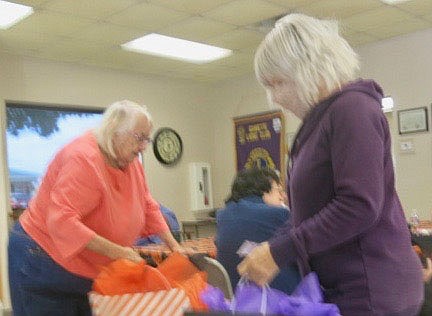 Westside Eagle Observer/SUSAN HOLLAND Sandy Steinhaus (left) and Carole Robel investigate the contents of their gift bags after winning prizes in a Halloween scratch-off card contest at the Billy V. Hall Senior Activity Center. Each patron was given a card and persons scratching off a pumpkin symbol won nice prizes including a soft, warm throw. &quot;Boo&quot; cards were not winners.

GRAVETTE -- Patrons at the Billy V. Hall Senior Activity and Wellness Center enjoyed a morning of Halloween festivities Tuesday, Oct. 26. Several came out to participate in the events and most stayed for lunch.

The fun began at 10 a.m. with several rounds of Halloween bingo. Center director Melissa Provence made the participants put on their thinking caps as she acted out the first words on the cards rather than calling them out. Winners in the bingo games received goodie bags filled with candy, popcorn, pretzels, art kits and other treats. Following the bingo games, she handed out scratch-off cards. A few who scratched off a pumpkin symbol received gift bags containing a soft, warm throw, seasonal table decorations and a plastic spider or other insect. Those who scratched off a "Boo" received nothing.

Several persons came dressed in costume and, as lunchtime neared, they stood up, introduced themselves and described their costumes. Guests were all given ballots and voting was held to determine winners in various categories. Contest winners were Jeanie Easley, best costume, with her cowgirl outfit; Penny Leonard, funniest costume, as a pirate's wench; Fran Croxdale, scariest costume, as "the slasher"; and Linda Hartzell and Marisa Atteberry, best couples costumes, as a human green bean and a battle warrior. Each winner received a sash and trophy.

Lunch was served at about 12:30 with ghoulish goulash, ogre (onion) rings, moldy bread (garlic breadstick) and "rotten" pumpkin dessert on the menu. 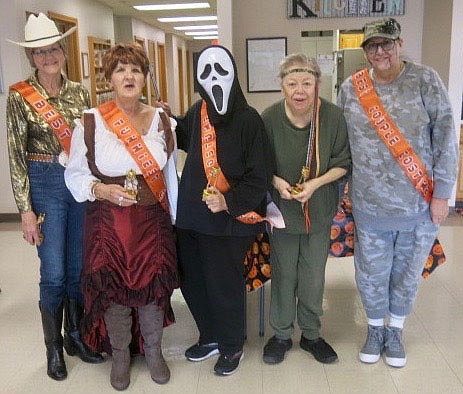 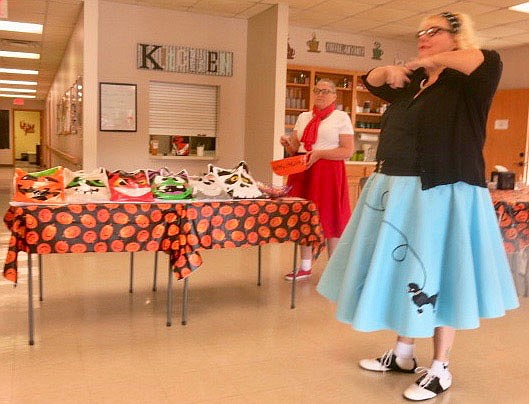 Westside Eagle Observer/SUSAN HOLLAND Melissa Provence (right), director of the Billy V. Hall Senior Activity Center, acts out one of the words on the Halloween bingo card during a bingo session at the Center Tuesday morning, Oct. 26. Her assistant, Cheryl Waeltz, waits in the background to show Provence the next word to be announced during the morning's festivities.