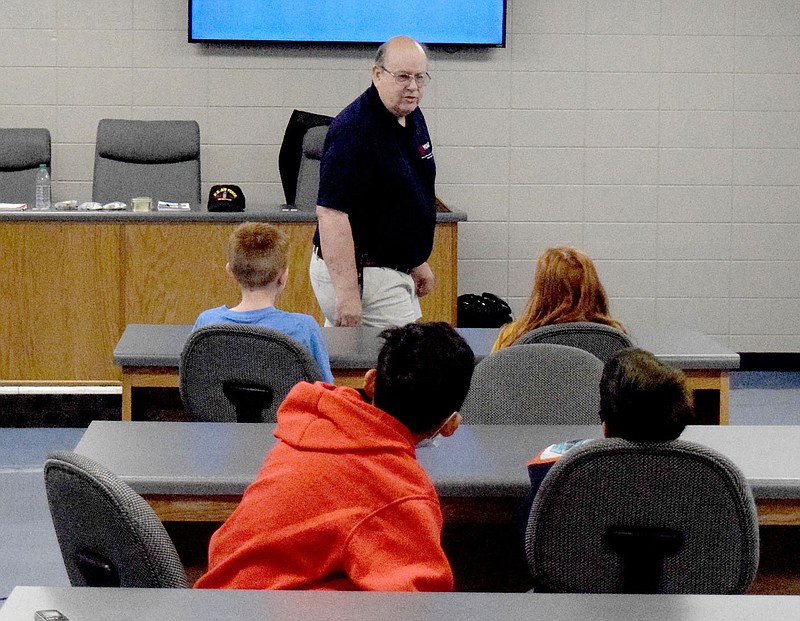 Westside Eagle Observer/MIKE ECKELS Alan Nabb, shares the history of the American Flag and proper flag etiquette to a small group of fifth graders at Decatur Middle School Nov. 16. Nabb, a retired United State Air Force officer, explained the does and don't of handling and displaying of our national symbol.

DECATUR -- "The flag is a living symbol representing our country. It represents the many freedoms, rights and responsibilities entrusted to its citizens. Proper display and use of the flag is the responsibility of every American" (An Introduction to the American Flag).

Alan G. Nabb, Lt. Col, retired, from Bella Vista, presented the dos and don'ts of flag etiquette and a history of this symbol of freedom. Nabb, a 20 year veteran of the United States Air Force during the Vietnam War, started his lesson with a brief history of the American flag.

The flag we raise and lower at sporting events, schools, public buildings and federal facilities was first commissioned by the Second Continental Congress on June 14, 1777. In an effort to promote unity within the colonies, the Continental Congress "Resolved: that the flag of the United States be thirteen stripes, alternate red and white; that the union be thirteen stars, white in a blue field, representing a new constellation" (www.ushistory.org).

To remember the birth of the American flag, "On Memorial Day 1916, President Woodrow Wilson issued a proclamation calling for nationwide observance of Flag Day on June 14. It was not until 1949 that President Harry S. Truman signed an Act of Congress designating June 14 of each year as National Flag Day" (An Introduction to the American Flag).

As far as whether Betsy Ross actually designed and stitched the first flag is a topic that is hotly debated among historians. Although there is no tangible evidence that Ross actually had anything to do with the first flag, there are still some historians who believe she did the work on the flag.

The original American flag was designed with 13 stripes, seven red and six white, representing the 13 original colonies that eventually became the first states.

The colors on the flag have a meaning of their own. Red represents hardiness and valor; while white represents purity and innocence; and blue, vigilance, perseverance and justice.

As for the stars, they have come to represent the "constellation of the states, each a part of our nation, each a separate state" (An Introduction to the American Flag).

As the states entered the Union, the circular pattern of the original flag shifted to lines of stars. However, the stars were not always uniform.

In 1958, a 17-year-0ld high school junior named Bob Heft, inspired by the Betsy Ross story, decided to enter a new design for a flag as part of a class project. His teachers were not impressed with his design and gave him a B minus. Heft explained to his teacher that the design was done in a way that, if states were added to the 48-star flag, no one could tell that there was a change.

His teacher's response: "If you don't like your grade, get it accepted into Washington, then come back ... and I might consider changing your grade" (www.rd.com/article/american-flag-high-school-project).

For two years, Heft made phone calls and submitted letters to the White House about his flag design. By this time, the 49-star flag (Alaska statehood) and 50-star flag (Hawaii statehood) were already used. But things were about to chance for Heft, changes that propelled him into stardom.

Heft received a call from President Dwight Eisenhower informing him that his flag design had been chosen from over a thousand different design submissions and, on July 4, 1960, he travel to the White House to see his design become the official American Flag.

But the Heft story does not stop here. He had the foresight to design a 51-star flag which is now waiting in place when the 51st state is added to the union.

The 50-star American Flag is now the longest-running official flag flying, at 61 years. But what is the shortest running American Flag in American history? The 49-star flag, which marked Alaska's entry into the union, was flown only six months until Hawaii entered the union as the 50th state.

For more information about proper American Flag history and etiquette go to http://www.legion.org/flag/code or https://www.usa.gov/flag.

Note: As for Bob Heft and his grade, the teacher changed it to an A. 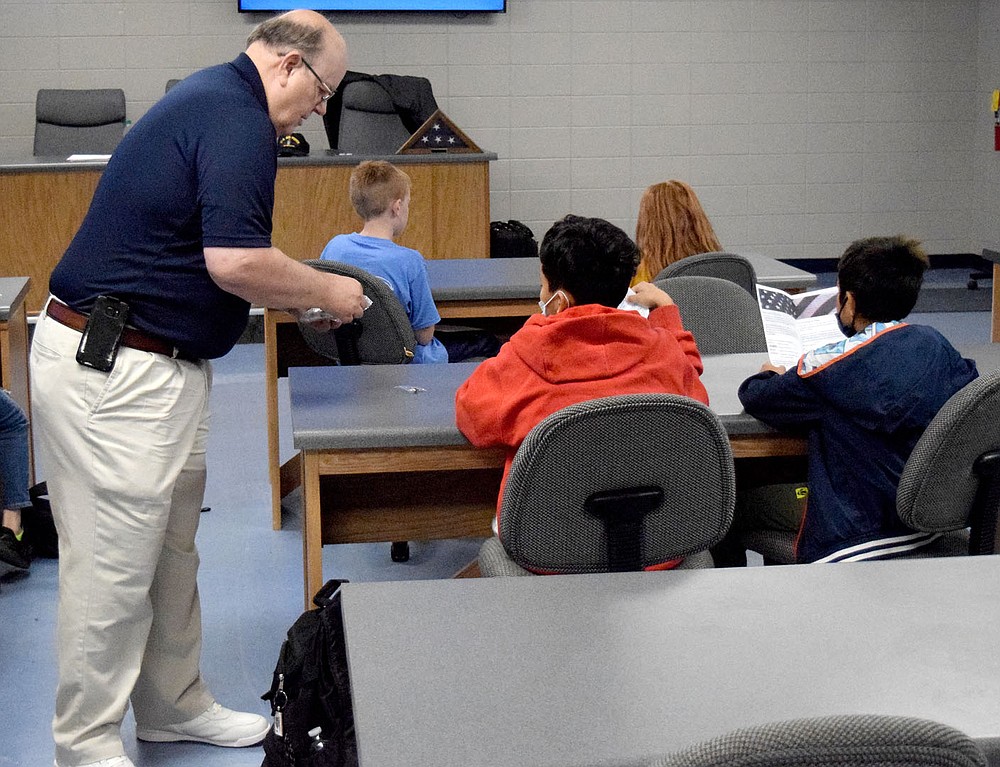 Westside Eagle Observer/MIKE ECKELS Alan G. Nabb, Lt. Col, Retired, hands two fifth grade students an American Flag pin during his class on the American Flag Nov. 16 in the media room at Decatur Middle School. Nabb was in Decatur to teach the history and proper flag etiquette to the young students at the middle school.