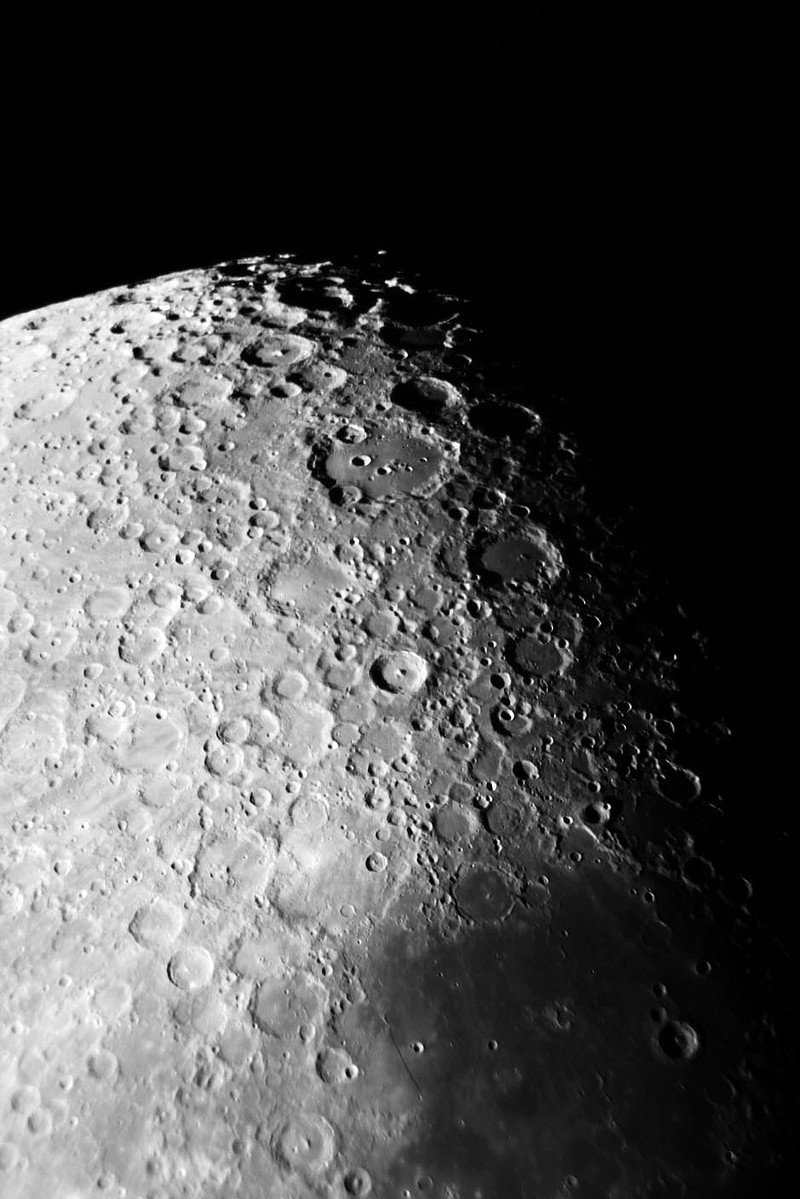 David Cater/Star-Gazing The Moon has many craters while other parts, in the bottom right, are dark lava, mostly made of basalt and has long ago cooled into a relatively smooth plain. The very large crater in the photo is Clavius, one of the biggest craters, being some 144 miles across.

Over the last month, both visual and photographic amateur astronomy has been difficult. In the daytime, you might have noticed that, even on the clearest of days, the sky was often not the blue one would expect but blue mixed with brown -- smoke! The fires in California and Oregon have generated so much smoke that even here in Arkansas, seeing objects in the night sky, as well as trying to photograph them, has been very difficult.

But -- there is always the moon. As I write this near the end of September, it is a clear night and the night of the full moon for this month. It is easy to observe even in pretty bad weather and it can be very dramatic in even a small telescope.

An ongoing debate among astronomers is the question of why the moon is so large relative to Earth. If you look at the sizes of other moons in the solar system and you compare these sizes to their primaries, such as Jupiter, Saturn, Uranus and Neptune, you can easily notice that the moons of these planets are tiny as compared to the sizes of the planets around which they revolve. One prominent theory has it that far in Earth's past, Earth was struck a glancing blow by an object about the size of present-day Mars. The leftover debris from this collision is thought to have coalesced into our moon. Interesting ...

Scientists believe there have been two very different eras in the moon's geology. In one era, the moon was very heavily cratered. The moon probably acted as a sort of shield, keeping the early Earth from getting as pocked with craters as the moon has been. Earth has had a share of meteor craters but the combination of weathering, water flow and tectonic activity have buried many craters on Earth that we might see today.

In another era of the moon's history, there was great volcanism and lava outflow. On a night of the full moon, one can see, with just the naked eye, places where the moon appears quite white and other, darker, areas where the moon is dark grey. If one were to look at the moon in even a small telescope, one would see that some of these darker areas are dark indeed -- in some places almost black. These dark areas were thought by the Romans to be seas, but they are relatively smooth areas of lava flow or lava beds. Some of them have been cratered by meteors that fell after the great period of volcanism and lava flow, but these dark areas are usually much smoother than the cratered areas.

I have selected a photo I made that I hope shows both kinds of lunar terrain. One part of the photo shows a place on the moon where there is much cratering and, in the bottom right part of the picture, the dark lava, mostly made of basalt, has long ago cooled into a relatively smooth plain. The very large crater in the photo is Clavius, one of the biggest craters, being some 144 miles across. If one looks at it in a telescope, one can see crater upon crater -- a history of massive bombardment gouged into the moon's surface.

Jupiter and Saturn are still well up in the southern sky at night. Looking south about 9 p.m. or after, Jupiter will be the brightest object there, unless the moon is shining. Saturn will be much dimmer but quite visible "in front of" Jupiter as Earth rotates and the night goes forward.

In October, we can have some of the clearest and most transparent of skies for all year. This is, of course, barring rain, clouds, snow or smoke! Sometimes we even have so much dust in the air that it isn't worth trying to observe.

Nonetheless -- get out there and observe. As my Dad often said, "You can't catch fish if you don't have a line in the water." See what you can catch!

David Cater is a former faculty member of JBU. Email him at [email protected] Opinions expressed are those of the author.