Gravette School Board has busy session 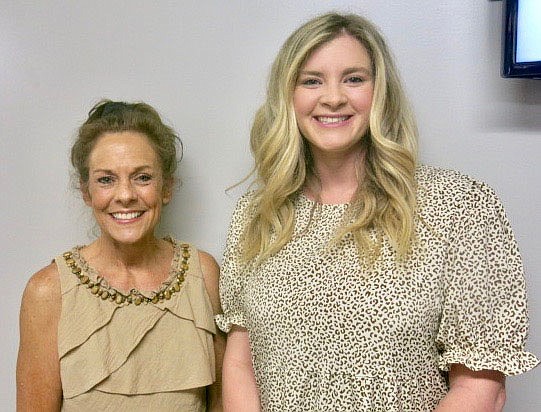 Westside Eagle Observer/SUSAN HOLLAND Lisa Baker and Morgan Bayley are all smiles after being welcomed and celebrated by school superintendent Maribel Childress at the Sept. 20 meeting of the Gravette school board. Baker, who is the new counselor at Glenn Duffy Elementary School, came to the district from Webb City, Mo., where she taught sixth grade and Bayley has moved from pre-K to teaching kindergarten at Glenn Duffy.

GRAVETTE -- Ty Latta, a senior at Gravette High School, and a member of Senator John Boozman's Congressional Youth Cabinet, led the pledge of allegiance to the flag to open the regular meeting of the Gravette School Board Tuesday evening, Sept. 20.

Four patrons addressed the board during the comment period. Megan Kane discussed the covid mandates. Morgan Maestri spoke to board members regarding her request to resign. Esther Seim and Kim Seim, director of Rejoice Ballet Company, both spoke regarding the proposed price increase for the rental of the GHS performing arts center. Kim Seim said the ballet company has been using the PAC for practice but she felt they could not continue doing so if the proposed increase goes into effect and she asked that they reconsider the proposed rates.

Board members went into executive session at 6:22 p.m. for the purpose of discussing resignations and employment. They returned to open session at 6:56 p.m. No votes were taken on any item.

Clay McGill, principal architect with BiLD Architects, Robert Adams and other representatives of Crossland Construction gave an update on the Western Benton County Career Center building project and Dr. Page recognition. After some discussion, board members voted to reaffirm approval of spending up to $6,000 to honor Dr. Page. Board member Heather Finley requested that a proposed timeline recognizing others in the past who had a part in the career center planning history not be forgotten.

Construction bids for renovating the old ALE/Academic Success Center came in much higher than expected. Robert Adams said that although lumber prices have come down, prices for steel are still high and, if they do decline somewhat, it's unlikely they will come down to pre-covid levels because demand is so high and there is a backlog of orders. After Adams' report, Kelly Hankins, Academic Success Center director, said that she could get along with the facilities she had at present, so board members decided to put the renovation project on hold for now.

Becky Sears, assistant superintendent, gave a report on curriculum and instruction and the 2020-2021 annual report to the public.

Kelly Hankins gave a report on academic success and said she had a "super busy" first month. Attendance is an issue, she said, and administrators are working on that. She reported they have started "Math Mondays" with after-school help on Mondays for those having difficulties in math. 18 students attended on Monday, Sept. 13, and 14 on Monday, Sept. 20.

Transportation director Richard Carver gave the back-to-school transportation report. He said he is still one driver short. Bus ridership has increased and there has also been a slight increase in ride times.

Superintendent Childress discussed kindergarten staffing and reported an eighth kindergarten teacher has been hired who is now serving as a substitute.

Childress also gave a report on the facilities use agreement, assisted by input from high school principal Shannon Mitchell. There was some discussion of the proposed rental fee increase and fees for comparable facilities in the area. Board members voted 6-1 to approve the facilities use agreement as presented, with board president Jay Oliphant opposed. Childress noted that local nonprofit organizations, if they are not doing a fundraiser or selling anything, are allowed to use the PAC with no charge.

Superintendent Childress, maintenance department supervisor Richard Carver and athletic director Norman Mitchell discussed the proposed turf project for the athletic fields. Carver and Mitchael both recommended hiring a consultant who will come in and supervise the project.

Superintendent Childress presented the option of constructing a Brian Burlsworth memorial recognizing the role Gravette High School played in the movie about his life. (Scenes on the football field were shot at Lion Stadium at GHS.) Board member Tracy Moorman also recommended reinstituting the Brian Burlsworth award to an outstanding player. After a brief discussion, board members decided to revisit the memorial idea after further consideration of styles and location.

Board members voted to approve the ESEA federal program assurances and authorize Superintendent Childress to sign the assurances and submit a budget to the Arkansas Department of Education as required.

Board member Tracy Moorman made a motion, seconded by Jodi Moore, to approve having the school dress code policy be enforced at all school functions since there had been an issue with some seemingly inappropriate dress at football games. Hope Duke asked if this would apply to the school prom and other dances. After some discussion, Moorman withdrew his motion and the issue will be discussed at a later date.

Superintendent Childress gave a covid report and consideration of covid directives and mandates on masks. Gravette's covid cases are below the state average and numbers continue to go down. A discussion was held regarding requirements for volunteers who work in the lunchroom and members voted that they would not be required to be vaccinated but they must wear a mask.

Members went into executive session at 10:32 p.m. and returned to open session at 10:59 p.m. for the purpose of discussing resignations and employment. When they returned to open session, members voted to approve a stipend of $856 for an assistant yearbook sponsor for the 2021-2022 school year, approve the transfer of one student into the Gravette school district and the transfer out of two students to the Bentonville school district, one student to the Gentry District and one student to the Springdale district.

Members voted to hire Alvin Hererra and Courtney Gilker as special education paraprofessionals, Patty Keith as a lunch duty aide at Gravette Upper Elementary, Sam Neale as a maintenance tech 3, Christian Daniel as an evening custodian, Heath Skaggs as a bus driver and Chris Weller as a physical education teacher at Gravette Middle School. They voted to deny the resignation of Morgan Maestri. All votes were unanimous.

An expulsion hearing was held preceding the meeting. Two Gravette High School students were recommended and confirmed for expulsion. One of the students unsucessfully appealed the expulsion. The other student did not appeal.