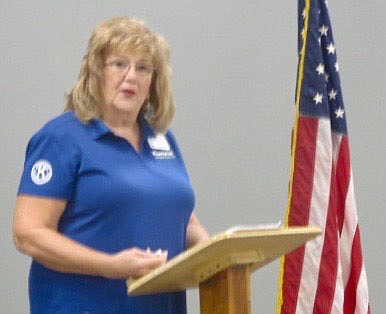 Westside Eagle Observer/SUSAN HOLLAND Carla O'Brien, Kiwanis Club MoArk District Governor for 2021-2022, speaks to members and guests of the Gravette Kiwanis Club at their meeting Friday, Oct. 1. O'Brien outlined her plans for MoArk District in the coming year and shared her goals, her governor's project and the motto she has selected, "We Are Family."

GRAVETTE -- An estimated crowd of 125 persons gathered at the Gravette Civic Center Friday morning, Oct. 1, to attend the regular meeting of the Gravette Kiwanis Club. Lori Tudor, director of the Arkansas Department of Transportation, was the guest speaker, and most came to hear her presentation.

The meeting was opened with the pledge of allegiance to the flag and the singing of "America the Beautiful." Club president Dennis Kurczek announced that the club had participated in the Siloam Springs Kiwanis' 75th-anniversary celebration Thursday, Sept. 23. He also announced that Gravette has received a Distinguished Club Award and a certificate for its service projects.

Carla O'Brien, Kiwanis MoArk District Governor, briefly addressed the group. She told of her plans for MoArk District for the coming year and said she had set a goal of adding 500 new members and starting five new clubs, as well as helping all struggling clubs in the district get back into good standing. O'Brien said her selected governor's project is the Beatrice Johnson Kiwanis Youth Camp and she would welcome donations to help support that project. She has chosen "We Are Family" as her motto.

President Kurzek introduced Mrs. Tudor, noting that she was the first female director of ARDOT and only the fifth person to serve in that position in the department's 47-year history. Tudor gave a brief overview of the department and said there are over 16,000 miles of roads in Arkansas. She noted that 55% of Arkansas voters approved Issue 1, a sales tax solely dedicated to county roads and state highways, which provided an additional $200,000,000 for state highways. 76% of that money goes toward the maintenance of the current highway system. This maintenance includes 84 projects in Benton County scheduled for the next 10 years, including overlay and bridgework.

The other 24% is directed toward new projects. The current 20-year projects include a second connecting Arkansas program, including improving Highway 112, finishing the Springdale Bypass, Highway 412 to Highway 612 to the XNA airport road and completing I-49 from Fort Smith to Kansas City. The next big link, she said, would be from Fort Smith to Texarkana. She said that these projects would take time. It took 30 years to finish the Bella Vista Bypass, she said, noting delays and lack of funding made her sometimes wonder if it would be completed during her tenure, but she said cutting the ribbon Thursday was "a highlight of her career."

Tudor then turned her attention to the Western North-South Connector Study and the virtual public meeting regarding it which was ongoing through Oct. 3. She said at this point it is just an idea; there is no funding for it and no environmental study has been done. She turned to Nickie Tyner, a consulting engineer with Garver, who then presented an outline of the four alternatives being considered: 1) Improving the existing connecting highways; 2) A route that would run east of Highway 72 and follow Highway 279 to the north side of XNA; 3) A route starting at the new interchange to Highway 412 and 4) A route that would run west of the Highway 72 interchange, then jog down to 412.

Tyner said about 5,000 individual viewers had given input on the virtual survey so far and a study team will review all input. She said there is no funding available for the project now and, if funding becomes available, environmental impact studies will be done. There is now nothing concrete.

Following Tyner's presentation, the meeting was opened for a question and answer session. One person commented that the existing roads in the area of XNA "are terrible" and asked, rather than building a new road, why not improve the existing roadways. Another said that they would not have been aware of the virtual survey if they had not been told by a friend and complained that there was a lack of publicity. Tyner replied that it had been publicized in ads in the Arkansas Democrat-Gazette and LaPrensa Libre and on social media. Someone suggested that a better way to get out publicity would be to send letters to homeowners in the affected areas.

One citizen commented that persons laying out the proposed highway routes did not consider the family farms, cattle, homes and cemeteries in the area. Tudor commented that the current planning is just the "first baby steps" and more detailed maps will be designed later. She said the far western route is now "completely not feasible." A questioner said that he had seen the Centerton master plan which includes some proposed new roads and asked about how that might interfere with the proposed project. Tudor told him that the cities are free to plan as they choose. "The highway department can't tell the cities what to do. It has supervision over state highways only."

One woman expressed concern about how the proposed routes lowered the value of property in the area. She said her neighbor had put his farm up for sale but the sale fell through because the prospective buyer learned one of the routes would fall nearby. Tudor told the questioners to "just live your lives and go forward. Don't worry about it."

The final questioner asserted that there was some misinformation being presented when Tudor said that no environmental study had yet been done. She quoted an email she had received stating that an environmental study had been done. She also pointed out that one route traveled through an area where there were 27 springs, some with underground water flow, that feed into Lake Eucha and eventually into the Tulsa water supply. She suggested the planners contact the mayor of Tulsa and the Oklahoma governor to get their opinions on the proposed project. She commented that people in the area community work together and "what affects one person affects another." She concluded by saying, "You have set a fire; you are not welcome here!"

President Kurczek said, "This is what it's about -- getting involved" and urged local citizens to continue to get involved and express their opinions on matters that affect their everyday lives. He said he hoped Kiwanis Club and other area civic organizations would continue to provide such forums. Former state senator Kim Hendren made a motion to hold another meeting to secure citizen input and ask Governor Asa Hutchinson to come and speak. The motion passed. 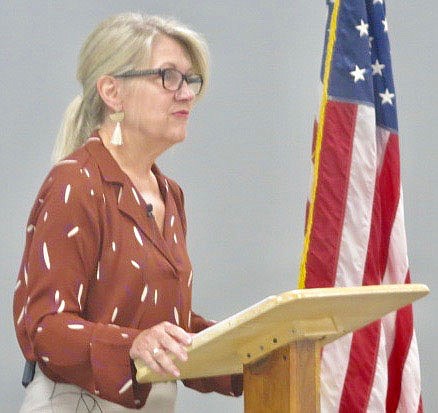 Westside Eagle Observer/SUSAN HOLLAND Lori Tudor, director of the Arkansas Department of Transportation, speaks to citizens assembled at the Gravette Civic Center Friday morning, Oct. 1. Tudor was guest speaker at the regular meeting of the Gravette Kiwanis Club and attracted a large crowd who came to hear her comments on the department's Western North-South Connector Study now being conducted. 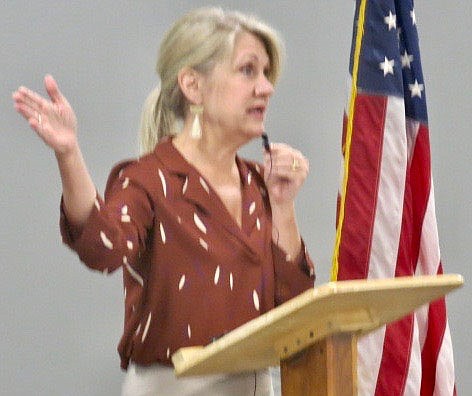 Westside Eagle Observer/SUSAN HOLLAND Lori Tudor, director of the Arkansas Department of Transportation, gestures as she speaks to citizens assembled at the Gravette Civic Center Friday morning, Oct. 1. Tudor was guest speaker at the regular meeting of the Gravette Kiwanis Club and drew a large crowd who came to hear her comments about the department's Western North-South Connector Study now being conducted.

Westside Observer/SUSAN HOLLAND A crowd of an estimated 125 citizens participates in a question and answer session following a presentation by Lori Tudor, director of the Arkansas Department of Transportation. Tudor was guest speaker at the regular meeting of the Gravette Kiwanis Club and many area residents came out to comment on how proposed highway routes would affect their property and their lives.