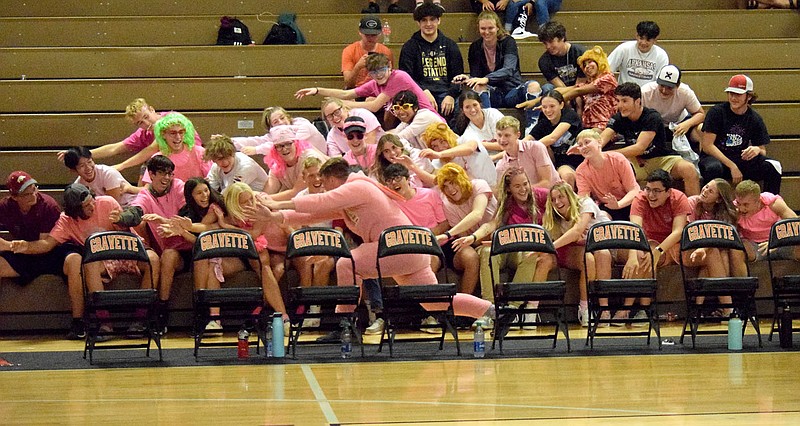 Westside Eagle Observer/MIKE ECKELS As the pink rabbit point to his left, the pink clad students point to their right during the break between the second and third set of the Gravette-Gentry volleyball match at the Competition Gym in Gravette Thursday night. This went on for nearly three minutes as the student section moved either right, left, up or down according to the bunny's directions.

GRAVETTE -- The Competition Gym was rocking Thursday night when the Lady Lions played host to the Lady Pioneers in the final home volleyball contest of 2021. One group of devoted Lady Lions fans provided the extra cheer need to help the Gravette team pull off a much-needed win over the Gentry visitors.

The Lion and Lady Lion student section has provided a vital and very entertaining tool to bring fans into the volleyball matches all season long.

The home volleyball contests have had a theme for each event. The first match on Aug. 17 was Hawaiian Night. A sea of wild Hawaiian-style shirts engulfed both the student and fan sections. Some of the other theme night outfits included Jersey, Orange Out, Super Hero, Western, and '70s' Hippie nights. But, by far the most memorable theme was Pink night.

Once again the student and fan sections were filled with a sea of pink. Leading the student section was a six-foot pink bunny rabbit.

Throughout the contest, the students provided a level of both intimidation and inspiration that proved to work in the Lady Lions' favor (the Lady Lions took the conference win in three sets).

Look for the student section to provide an extra level of Lions Pride during the upcoming basketball season in Lion Arena in November. 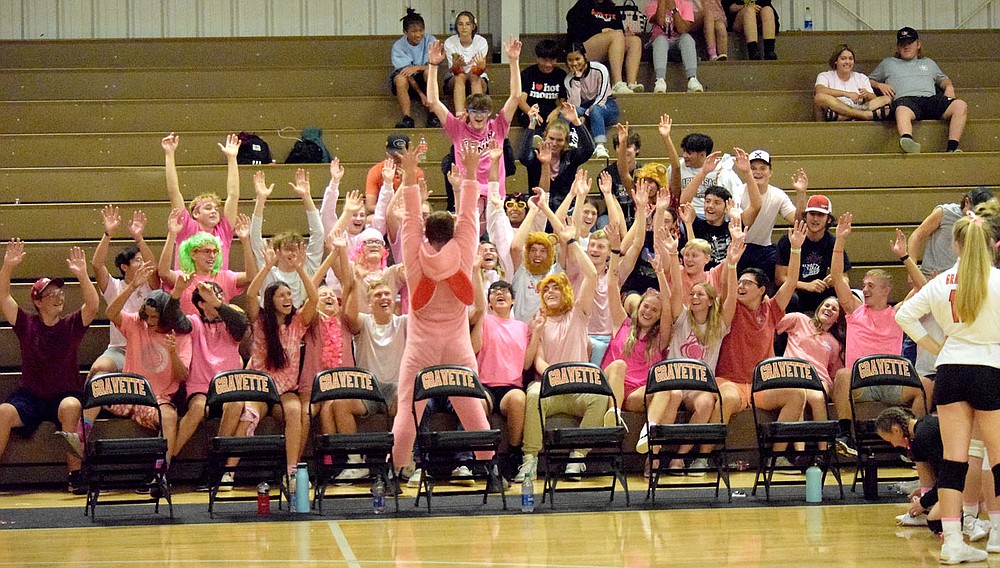 Westside Eagle Observer/MIKE ECKELS The Gravette student secton, lead by, a pink bunny (center,) raises its hand straight up in roller coaster fashion during the Gravette-Gentry varsity volleyball match at the Competition Gym in Gravette Thursday night. In the final home game of the volleyball season, it was pink night and almost the entire student section wore some form of the color.

Westside Eagle Observer/MIKE ECKELS As the pink bunny (center) points to his right, the Gravette pink student section bends over and point to their left during the break between sets of the Gravette-Gentry varsity volleyball contest in Gravette Thursday night.