Westside Eagle Observer/SUSAN HOLLAND Kurt Maddox (right), mayor of the City of Gravette, visits with J.W. Smith, an owner of Smith and Betts Barbecue, at the Greater Gravette Chamber of Commerce open house Wednesday afternoon, Oct. 20, while other area business owners enjoy visiting and refreshments. The open house was held in the chamber's new office on Main Street in observance of Support Your Local Chamber Day.

GRAVETTE -- Members of the Greater Gravette Chamber of Commerce held their regular meeting Wednesday, Oct. 20, at the Billy V. Hall Senior Activity Center. President Steve Harari welcomed those present and introduced his fellow officers, treasurer Sundee Hendren and secretary Nicole Jowers. He said there is a vacancy in the vice-president's position and he has been talking with a person who is interested in that position.

Harari acknowledged new chamber member Smith and Betts Barbecue and introduced J.W. Smith, who was present to represent the business. He also expressed thanks to Roger and Debbie McNeece of Panhandler Crafts, who donated some nice prizes for the chamber's teacher appreciation event.

Harari announced several upcoming events for the chamber, including Trick or Treat on Main Street Oct. 30; a Business After Hours event Thursday, Nov. 4, at The Recreation Parlor; the annual meeting and election of officers Wednesday, Dec. 15; and the annual gala Thursday, Feb. 4, at Legacy Ranch.

October 18-22 was Chamber of Commerce Week in Arkansas and Wednesday was Support Your Local Chamber Day. In observance of the special day, the local chamber hosted a panel discussion at the meeting which included Gentry Chamber of Commerce president Janie Parks and Siloam Springs Chamber of Commerce president Arthur Hulbert. Harari introduced the two guest speakers and each told a little about their individual chambers and how they operate. They told about events they sponsor in their cities and gave suggestions for how to have a viable chamber and how it can best serve the community.

Parks, who has been chamber director for more than six years, said the Gentry Chamber has about 75 members. She said the director's position has been a paid position for 20 years and she felt that was a key to its success. The Gentry group sponsors seven major functions, including a quilt show, Pickin' Time on 59, an annual Easter egg hunt and one of the best fireworks shows in the area. The major event is the annual Freedom Fest which has been ongoing for more than 100 years and is a town tradition.

Parks told Harari, "The job of a small-town chamber is broad. It's much more than just bringing in business. Economic development is important." She said the chamber must build over time and, as funds increase, activities can increase. The chamber tries to support businesses, especially small businesses, and makes that its major focus. She said the Gentry chamber receives $40,000 from the city each year and also has an active United Way which provides it an additional $7,000-$10,000. She said each chamber must find its own purpose and build on that. Managed growth is important so as not to change the character of the town, she said, and she encouraged all businesses to try to make their towns a community to be proud of. She complimented Gravette on its downtown revitalization project and said Gentry is getting ready to embark on a downtown renovation project as well.

Hulbert, who said he was a former legislator in Oklahoma, told a little of his history and said that the biggest event in Siloam each year is the town's Dogwood Festival. The Siloam Chamber has a lot of projects that benefit the schools, he said, and sponsorship for major events is a key factor. He was proud of the fact that the chamber has helped 21 companies start up in the last 20 months. Start-up help is available free to all chamber members and the chamber also has a maker workshop available not only to chamber members, but the community as well, in which it has gathered resources such as a 3-D printer and laser cutter. Most Siloam Chamber projects are done by volunteers, Hulbert said, including a couple of interns from John Brown University and one from the high school. The chamber has over 500 members with a membership ranging from age 17 to 75 and operates from a nice building they own downtown. The chamber receives $30,000 a year from the city.

Hulbert said the key to a successful chamber is just to "know who your people are, find out what their needs are and meet them." He encouraged Gravette Chamber members to "never forget who Gravette is, don't change it; be unique, don't try to be someone else."

Harari asked the visiting chamber presidents about the development possibilities for the area now that the new bypass is open and mentioned that there are now 10 quadrants of land which are potential business locations. Parks said the town must just decide what its priorities are ("what do you want to go for first?"). She suggested that all business owners get well acquainted with their mayor and city planners and tell them what they want. Hulbert said it is "an exciting time of growth" and reminded those present that they should want their communities to keep their identity. He cautioned that it is important to remember that potential businesses will need the proper infrastructure, water, sewer, good roads and school services, and to plan to ensure that those things are in place.

Chamber members hosted an open house in the afternoon from 4 to 6 p.m. in the chamber office at 109 Main Street S.E., with Mayor Kurt Maddox, several business owners and chamber members present to see the office, enjoy refreshments and visit about the area, its assets and possibilities. 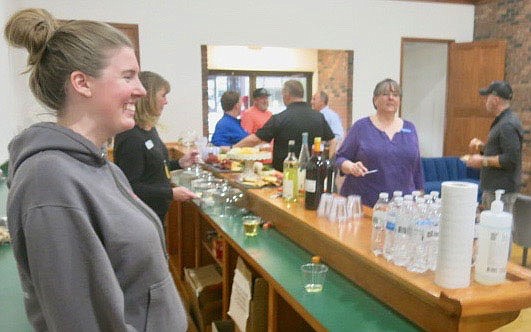 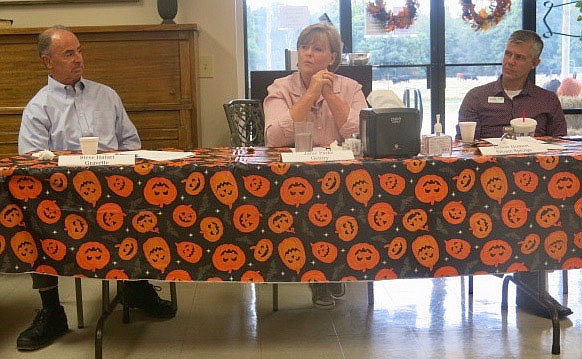