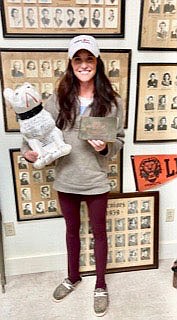 Photo by Steve Mitchael Amanda Price poses at the Gravette Historical Museum with a chalk bulldog from the museum's collection and a 1943 scorebook she donated at the Oct. 11 meeting of the museum commission. Amanda is the granddaughter of Olin Leonard, whose name is listed on the 1940 bulldog trophy and in the scorebook which she found in a barn on her grandfather's farm, where she now lives.

GRAVETTE -- Amanda Price attended the Oct. 11 meeting of the Gravette Historical Museum Commission and donated an official scorebook dated 1943. The scorebook complemented an item already in the museum collection, a chalk bulldog with the inscription "Relic of the trip to State Tourney of Jonesboro 1940."

There's an interesting story behind the bulldog, a trophy of sorts from that trip the town basketball team made to Jonesboro. Apparently, there wasn't a trophy to present to the winning team, which was Gravette. After the game, the team traveled on to Memphis, Tenn. Wanting something to commemorate their victory, team members shopped for a lion. When they were unable to find one, they settled on the bulldog to signify their win.

Other inscriptions on the bulldog include the word "Oscar," which is presumed to be the team's name for the dog, and the words "Yea, Thelma" on the right side. No one has been found who can verify Thelma's identity. "7 miles from Missouri and 10 miles from Oklahoma" was listed, likely to describe Gravette's location, and "Homestead Inn" and "Pivot Rock" likely identify where the team stayed on the trip and a location they visited in Eureka Springs on their way home.

Price related that the scorebook and other record books were found in a barn on her grandfather's place, where she now lives. The Leonard farm home was used as a polling place for rural Gravette voters for many years.

(Information for this story was contributed by Steve Mitchael, chairman of the Gravette Historical Museum Commission.)