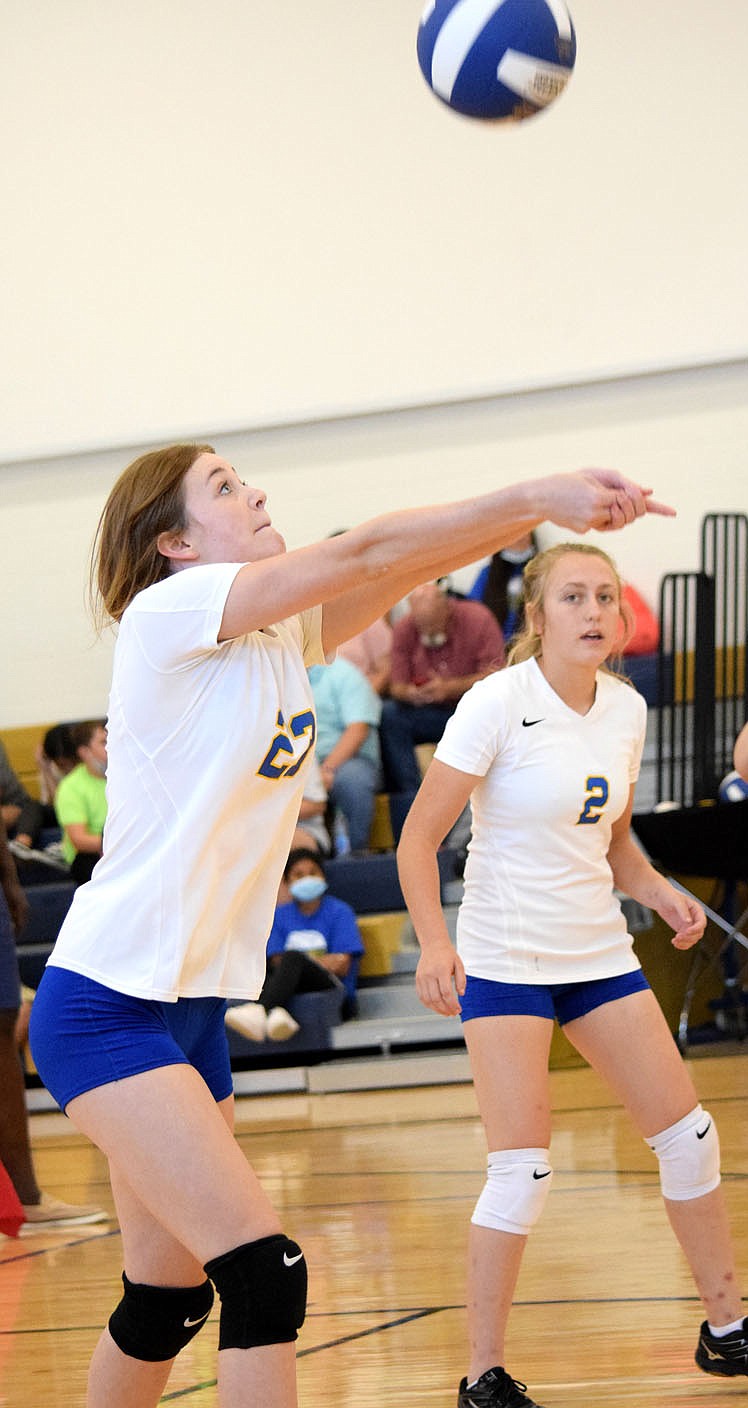 Westside Eagle Observer/MIKE ECKELS Lady Bulldog Brooklyn Todd (left) returns the ball back over the net into the Lady Yellowjackets' side of the court during the third set of the Decatur-Mulberry varsity volleyball match in Decatur Aug. 31. Decatur took its first win of the 2021 season.

DECATUR -- After losing in straight sets to Ozark Catholic Aug. 26, the Decatur Lady Bulldog volleyball team regrouped and, after a few changes to its game plan, came up with the first win of the 2021 volleyball season on Aug. 31.

After moving a few players around and changing a few items in her playbook, head Coach Cali Lankford saw a change in her players as both Decatur junior high and varsity teams squared off against the Mulberry Lady Yellowjackets at Decatur Middle School in Decatur.

Lankford faced a daunting task before the junior high team even hit the dressing room before its first match of the new season.

"I have so many players that I

don't have enough uniforms for all of them," Lankford said. "I only had 25 sets and we have 28 players."

Lankford's solution? Since the team has no old uniforms, Lanford had to pull from the varsity set and use numbers that are not in use this season. Problem solved.

The junior high girls were up first. From the start, Decatur dominated the match in the first set taking the victory, 25-13.

Before the second set got underway, Lankford decided to play all of the junior girls during the remaining sets. This gave her the advantage of seeing who stands out and which girls that need more help.

Meanwhile, the Lady Yellowjacket junior high team had a different strategy as they took the court for the start of the second set. Decatur jumped out in front in the early going, but Mulberry caught its second wind and fought back, tying the set at nine all. From there, control of the set went back and forth for a while until Decatur quit making fundamental mistakes and began playing heads up volleyball and pulled away from Mulberry. Decatur took the set, 25-17, wining its first match of the season.

About midway through the second set, one of the new players, Andriana Mendoza, who had never played in a volleyball match before, was put in the lineup by Lankford. Mendoza worked through the rotation until it was her turn to serve. At this point, nerves began to set in as she took her place behind the service line. Earlier, during practice, the youngster was having problems getting the ball over the net. Her fortunes were about to change.

Mendoza tossed the ball up and, as it came down, she hit it at the right angle to power it over the net and it dropped in between two Mulberry players for a Decatur point. A little screech came out as she could not believe she just got the ball over the net. Little did Mendoza know the best was still to come.

She served the ball much the same as she did the first time and again it powered over the net. This time a Lady Yellowjacket player intercepted the ball, sending it straight back to Mendoza. Before she had a chance to think, she caught the ball with a forearm hit and sent it back over the net to the same player who, when she hit the ball, sent it over her own head and against the wall for another Decatur point. This time Mendoza had plenty to celebrate and she and her teammates did just that. Her third try hit the net and the point went to Mulberry.

Now it was the varsity team's turn. As with the junior high match, the varsity girls quickly took control of the first set. As the set progressed, the Lady Bulldogs starting making little mistakes which the Lady Yellowjackets took full advantage of and began catching up to Decatur. A timeout by Lankford reversed the fortune for Decatur and they won the first set, 25-20.

Decatur had no trouble maintaining control of the second set, taking the win, 25-13, over Mulberry.

The Lady Bulldogs nearly lost the third set on fundamental mistakes which allowed the Lady Yellowjackets to nearly take the set. But four straight points put Decatur in front for good as the Lady Bulldogs pulled off their first win of the season, 25-21, taking the match in straight sets.

The Centerton based Lady Warriors have become one of Decatur's fiercest rivals and last season the Lady Bulldogs lost every time the club faced Life Way.

Coming off its first win of the season, the junior high team was up first. Lankford backed off of her previous strategy of playing everyone on the team and instead played the ones that showed promise from the Mulberry win. Her ideas worked and the junior high Lady Bulldogs took the win in two sets over the Lady Warriors.

But the Decatur varsity team was another story. Several times during the three-set match the Lady Bulldogs captured the lead from the Lady Warriors. But the strength of the Life Way offense proved to strong and the Lady Warriors powered back and won the match 25-12, 25-13, 25-16. 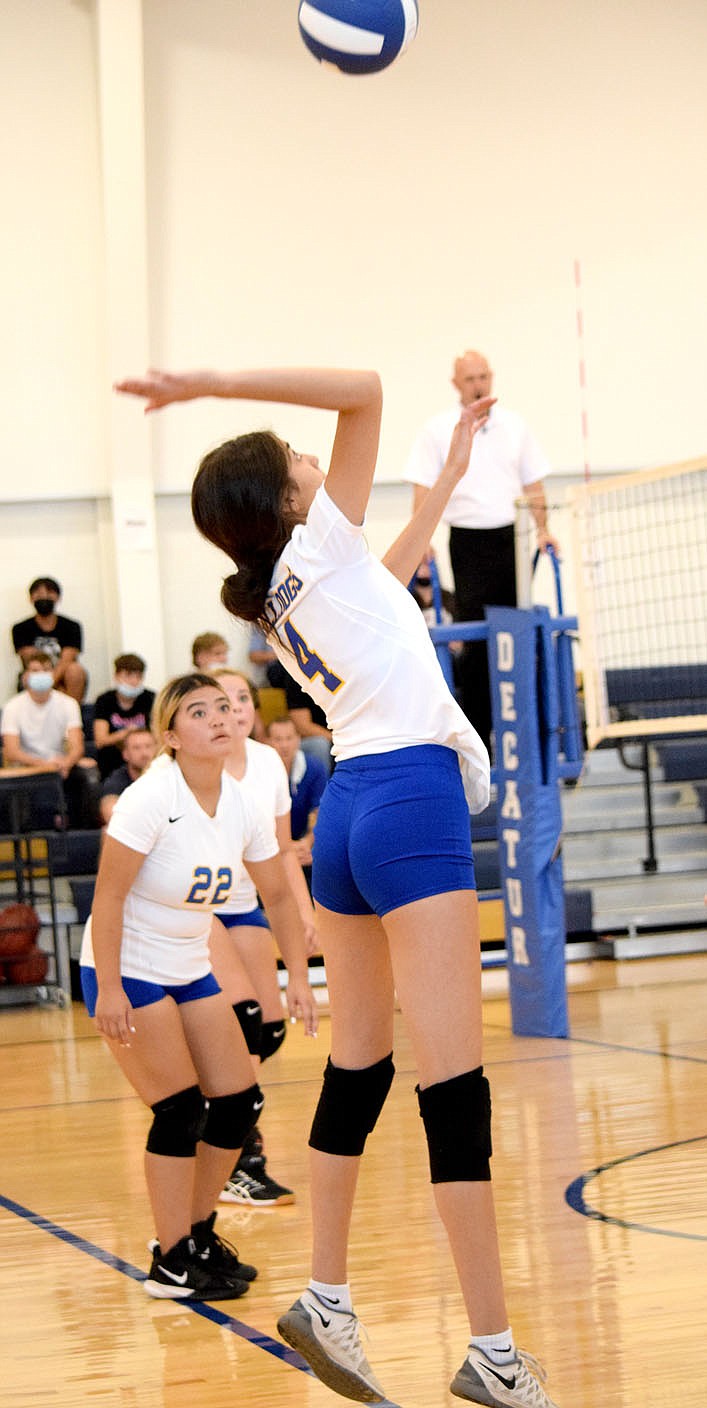 Westside Eagle Observer/MIKE ECKELS Lady Bulldog Giselle Fuentes (4) hits the ball back into Lady Yellowjacket territory during the first set of the Decatur-Mulberry varsity volleyball match in the gym at Decatur Middle School Aug. 31. The Lady Bulldogs took their first win of the 2021 season, defeating the Lady Yellowjackets in three straight sets. 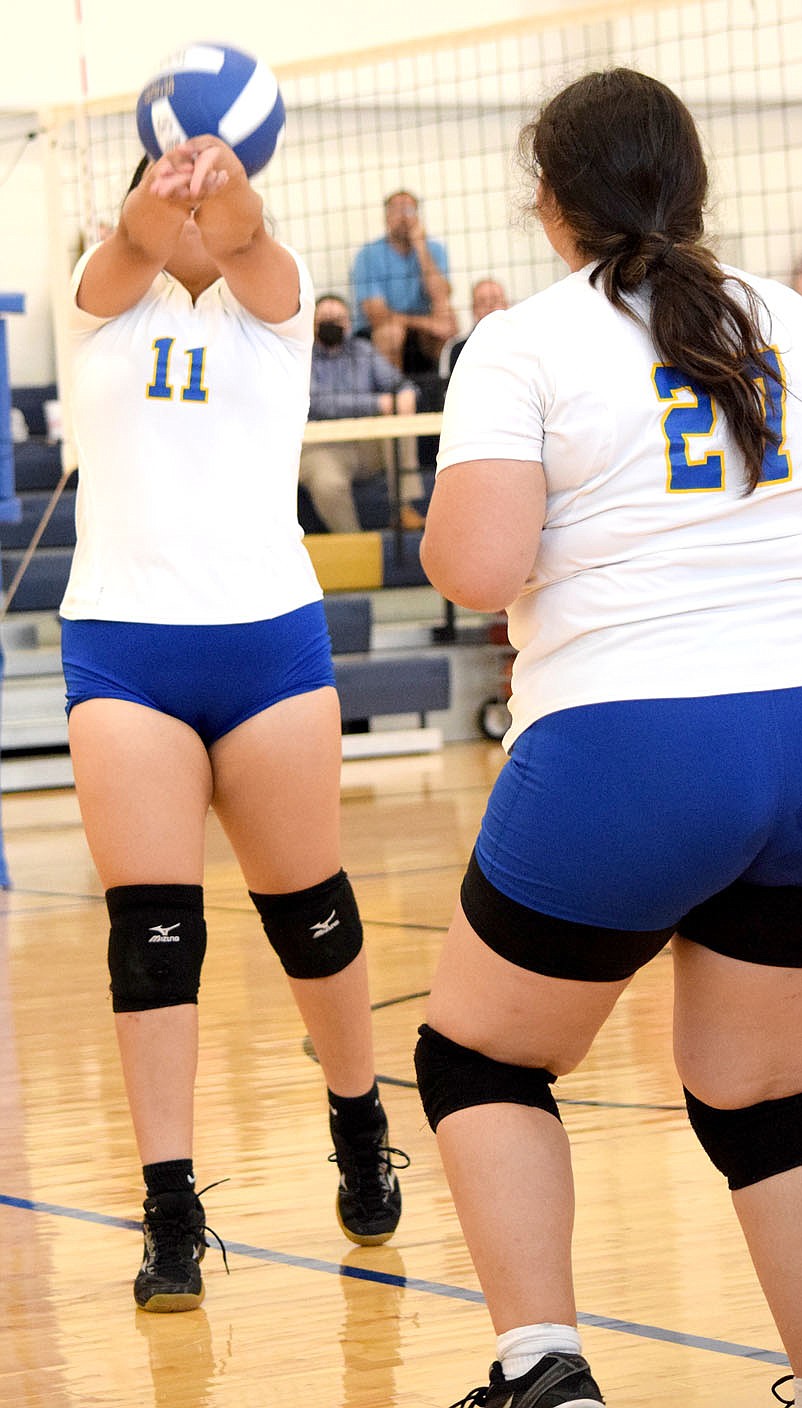 Westside Eagle Observer/MIKE ECKELS Lady Bulldog Jackie Mendoza uses a forearm hit to send the ball back over the net during the second set of the Decatur-Life Way Christian volleyball match in the gym at Decatur Middle School Thursday afternoon. Life Way claimed the win in straight sets over Decatur. 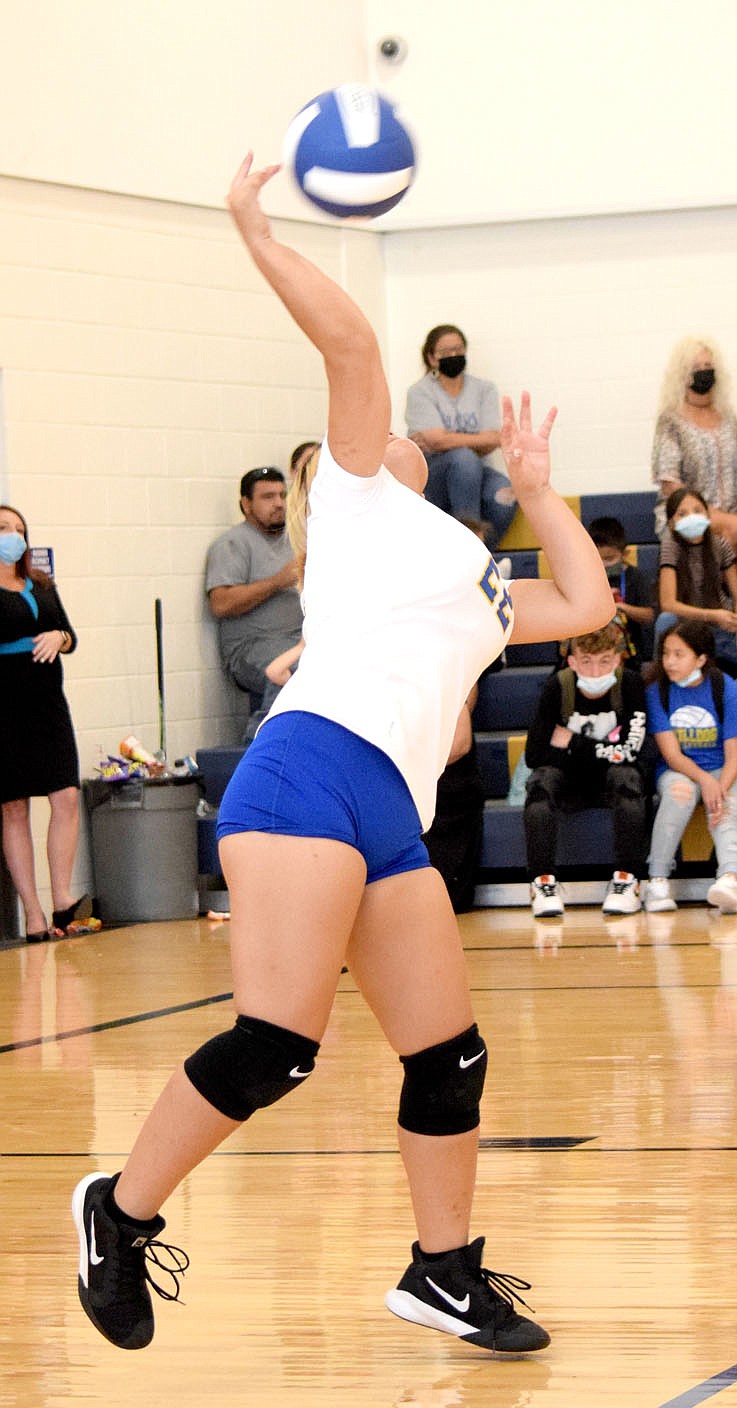 Westside Eagle Observer/MIKE ECKELS Lilly Lee puts a little extra punch on the ball as she serves to the Lady Warriors' side of the court during the first set of the Decatur-Life Way Christian varsity volleyball match in Decatur Thursday afternoon.