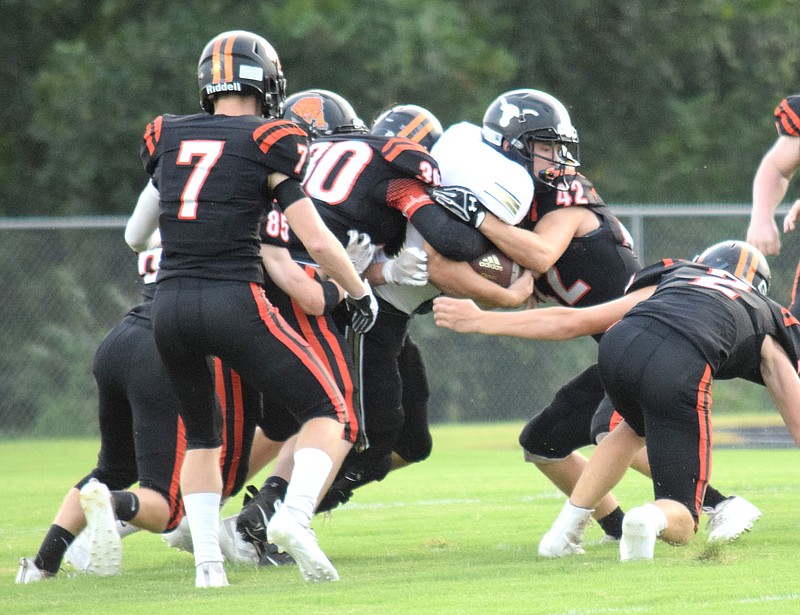 Westside Eagle Observer/MIKE ECKELS A pride of Lions pounces on a lone Longhorn running back during the first quarter of the Gravette-Inola, Oklahoma nonconference football contest at Lion Stadium in Gravette Friday night. The Lion defenders were able to bring the Longhorn quarterback down for a loss on this particular play.

GRAVETTE -- Lion football fans filled the bleachers at Lion Stadium Friday night for the first home game for the Gravette varsity football 2021 season. The team's opponents for this moment in Lion football history were the Longhorns from Inola, Oklahoma. The fate of the contest came down to the final 35 seconds of the fourth quarter.

A few minutes into the first quarter, Rhett Hilger, on a quarterback keeper, found the end zone for the first touchdown of the night and an early Gravette 6-0 lead. Hilger's conversion attempt fell short of the goal line.

Inola fought back a few minutes later when Jace King crossed the goal line for the Longhorns' first touchdown of the game. The extra point attempt split the uprights, giving Inola a 7-6 lead.

In the second quarter, the Lions marched all the way to the 10-yard line of Inola where Hilger decided to keep the ball and fought his way into the end zone, or so he thought. Officials ruled that Hilger was half a yard short of the goal line. On fourth and goal, Hilger was stopped once again by the Longhorn defense, turning the ball over to the Inola offense. On second down and with Inola quarterback Tucker Ford standing in the middle of his own end zone, the Lions managed to tackle Ford for a safety and two points, giving Gravette back the lead by one.

The Lions managed one more touchdown on a short pass from Hilger to running back Kyler Austin, resulting in the second Lion touchdown. The point after by William Betz put the Lions in a good position in the contest as the first half came to a close with Gravette leading 16-7.

Both teams managed to get within reach of the goal line in the third quarter. But the Gravette and Inola defenses stayed fast and the quarter ended with no further additions to either side of the scoreboard.

Midway through the final 12 minutes of the contest, Longhorn Grayson Cosper was knocked into the end zone for six points. The extra point was good, making it a 16-14 Gravette football game.

In the final minute of play, Gravette was only five yards away from the Inola end zone with the chance to put the contest away. Gravette got into the end zone but a penalty called back the play. The Lions were

then plagued by a series of penalties that pushed them back to midfield. On fourth down and less than 10 yards, Gravette's first-down attempt failed and the Lions were forced to turn the ball over to the Longhorns.

With 35 seconds left to play and the Longhorns short of the goal line on fourth down, Inola's field goal kicker took the field for a 20-yard attempt. It split the uprights and gave the Inola Longhorns the lead, 17-16.

The Lions had less than 30 seconds left to reach the Inola end zone. But fate favored Inola when the Longhorns picked off a Hilger pass, ending the Lions' hope of victory.

The Inola Longhorns went on to defeat the Gravette Lions, 17-16.

Gravette returns to Lion Stadium on Sept. 10 for another non-conference contest, with the Pryor, Okla., Tigers, at 7 p.m. 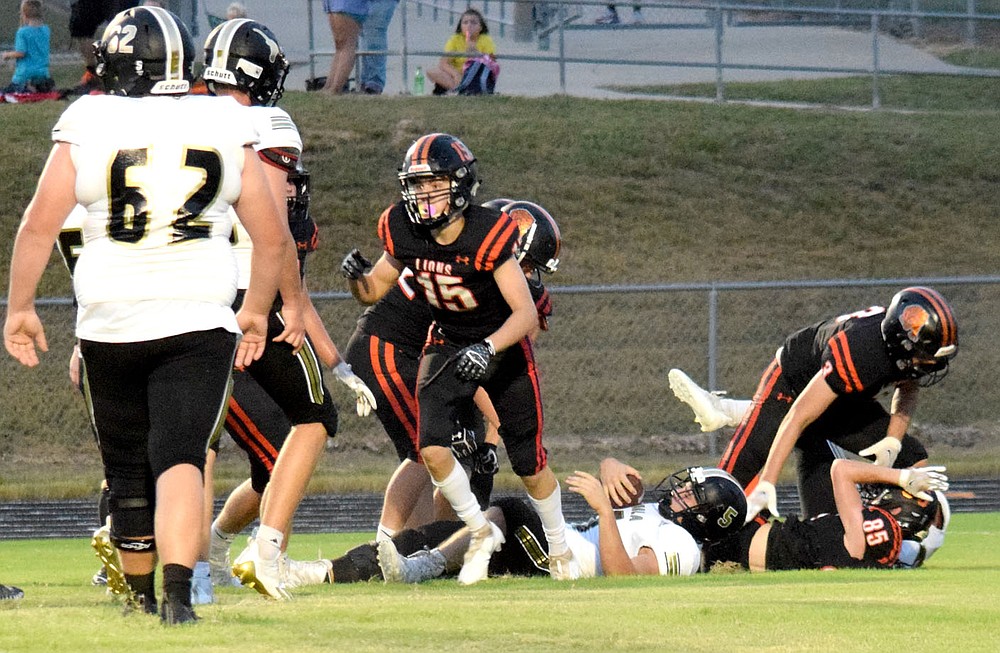 Westside Eagle Observer/MIKE ECKELS Lion Ryder Brown (15) gets off the ground after tackling the Longhorn quarterback in his own end zone for a Lion safety during the second quarter of the Gravette-Inola varsity football contest in Gravette Friday night. The safety put the Lions ahead of the Longhorns by one point going into the halftime break. 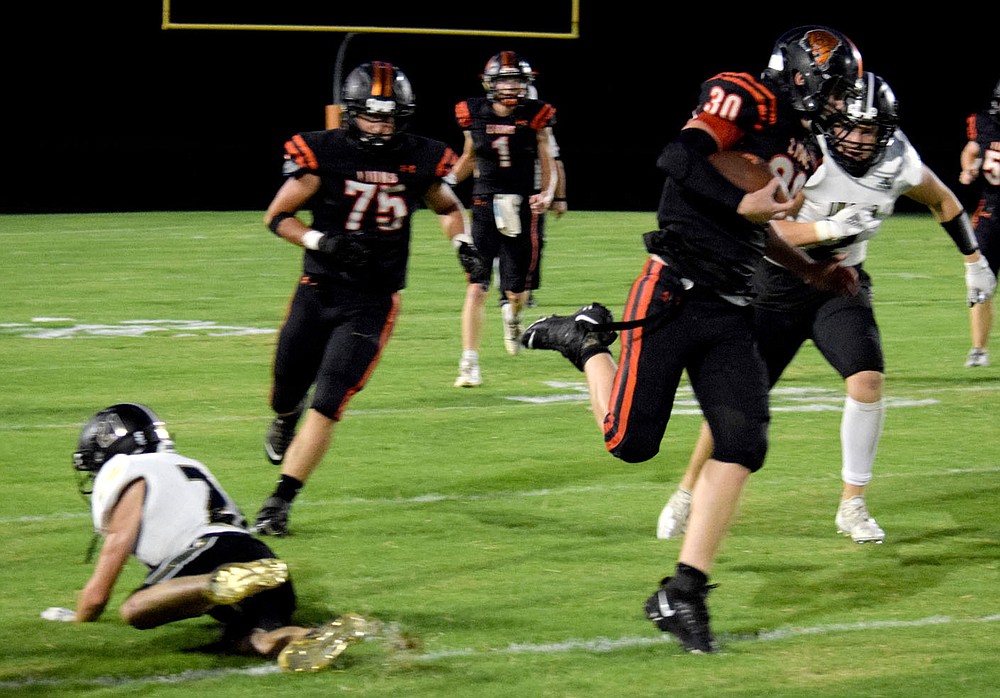 Westside Eagle Observer/MIKE ECKELS Kyler Austin (Gravette 30) literally jumps out of a tackle (lower left) and continues to gain yardage during the Friday night football contest between the Gravette Lions and the Inola, Oklahoma Longhorns at Lion Stadium in Gravette. Austin managed another 10 yards before being tackled by another Longhorn. 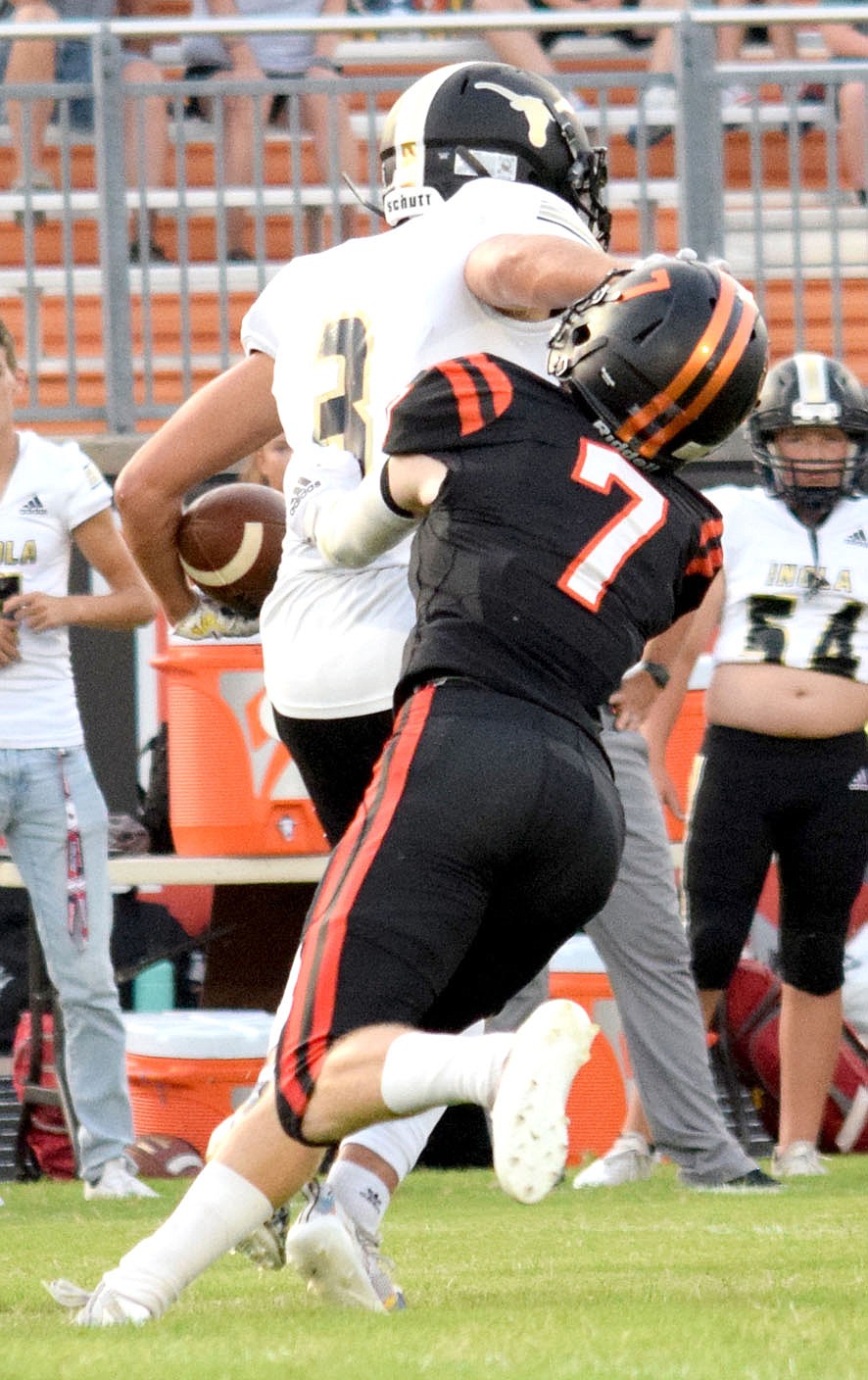 Westside Eagle Observer/MIKE ECKELS Mason Meeker (Gravette 7) latches onto a Longhorn running back in an effort to prevent a sizable gain for the Longhorns during the second quarter of the Gravette-Inola, Oklahoma football contest Friday night in Gravette. 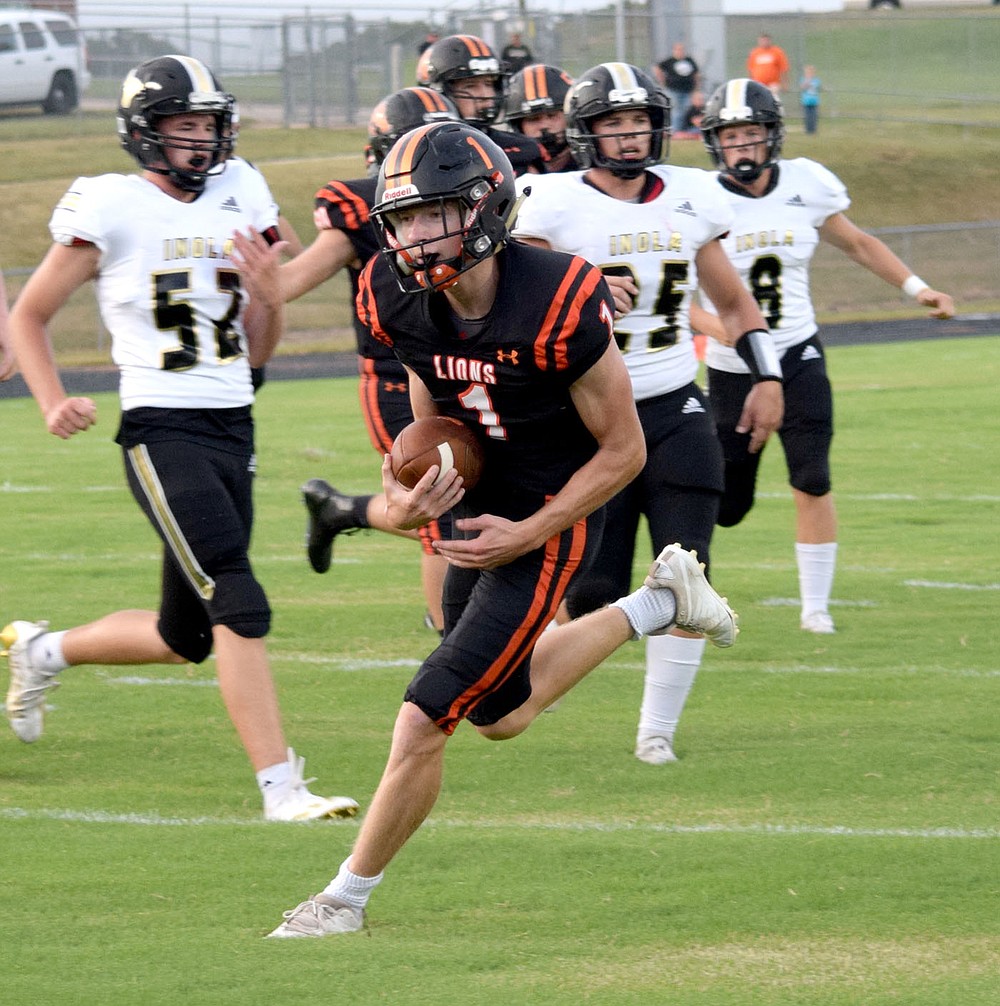