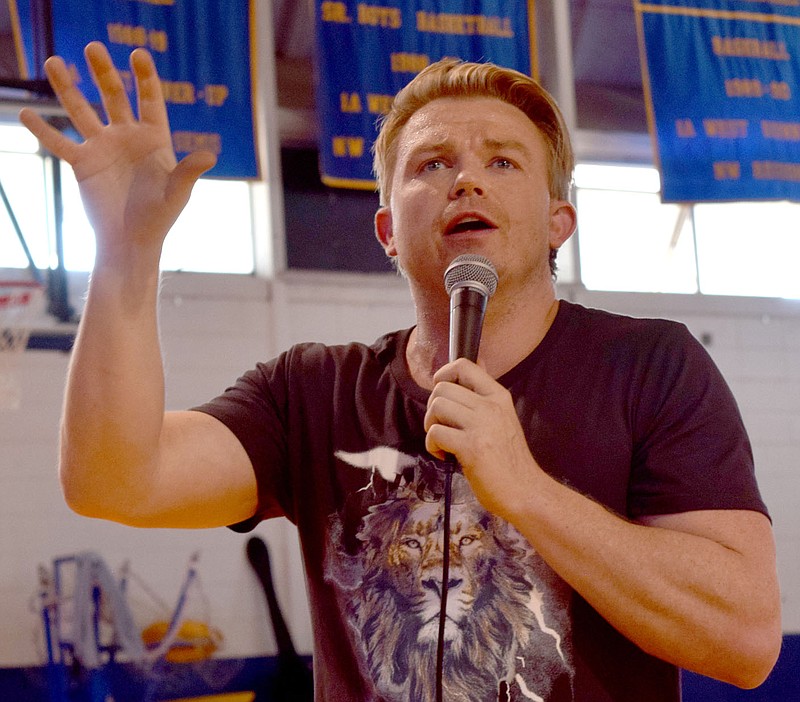 Westside Eagle Observer/MIKE ECKELS Craig Scott, a surviver of the Columbine High School shooting in 1999, talks to middle and high school students about compassion and kindness to others during an assembly at Peterson Gym in Decatur Sept. 8. Scott's sister Rachel Joy was the first of 15 victims in the Littleton, Colorado tragedy.

DECATUR -- "Don't let your character change color with your environment. Find out who you are and let it stay its true color," a 17-year-old girl wrote in her diary sometime in early 1999 -- profound words of wisdom that every person should try to live by. But this bright and very talented young person, a person determined to make an impact on the world died at the hands of two gunmen during one of the most heinous school shootings in American history.

Rachel Joy Scott was under a tree in front of Columbine High School in Littleton, Colorado, on April 20, 1999, waiting to meet a friend and help that person through troubled times when Eric Harris and Dylan Klebold, two students at the school, walked up and shot her, beginning what is now known as the Columbine High School Massacre that took 15 lives, including those of both Harris and Klebold. Rachel was the pair's first victim.

Rachel's younger brother, Craig, was in Decatur on Sept. 8 to talk to students at Decatur Middle and High Schools about the event that forever changed his life and how he turned this tragedy into a way to let young people know that they all have worth in life. Craig also held a night program for families as part of his national "Pain to Purpose" lecture tour.

Craig recounted the events that took place that fateful morning in April 1999.

"I remember that morning before school that Rachel and I had a fight," Craig begins. "A few hateful words were exchanged and, when we got to school, I remember slamming the door on her in anger."

This proved to be the last time the two siblings were together.

"My sister was asked earlier to hang out with a small group of popular girls," Craig recalled. "But she decided instead to meet a boy who himself was going through a very hard time. That was the way Rachel was, always reaching out and helping others before herself."

Meanwhile, a group of students and a few teachers were gathered in the school library, including Craig and two friends. Suddenly the peaceful day turned into a scene of panic.

"I heard a series of pops outside the library window," Craig said. "Then one of the teachers came in and told us that someone was shooting people in the hallways and to get under the desk."

The two shooters, armed with semi-automatic weapons, shotguns and homemade bombs, made their way through the hallway and eventually into the library where they once again began their random shooting rampage.

"I was terrified and couldn't move," Craig remembers.

Craig's lack of movement when the gunman walked by him and his two companions saved his life. But his friends, one on either side, were not as lucky. They died in the library where most of the victims were lost that day.

Craig survived the attack and was soon reunited with his family. But word about Rachel's fate did not reach the family until later that night.

For months after the attack, Craig was asked by family, friends and the media what it was like during the event. One day Craig and his younger brother were watching a movie with violent content. The movie got more and more violent and Craig had enough and asked his brother to turn it off. His brother ignored Craig's request. Finally, Craig snapped and grabbed his brother and dragged him into the kitchen and slammed him on the floor. It was at that moment when Craig realized that he was becoming just like Harris and Klebold.

It would take a chance encounter with a stranger during a summer church trip to Africa that changed Craig's life forever.

"The bus driver we had on the trip was an interesting person," Craig said. "Every day he would sing this one particular song and sing it in his remarkable style. I play that same song every day, a different performer who sounds very much like that bus driver."

One night Craig was restless and decided to venture outside his tent. The bus driver saw Craig and went to talk to him. As the driver encountered Craig, the driver uttered four simple words, "Tell me your story."

Craig eventually found out that the driver had returned to his home one day and found that his entire village had been wiped out, including 17 members of his own family. He would be the only member of his family left. This changed everything for Craig.

Soon afterward, Craig decided to turn this negative situation into a positive one. This is what Rachel would want. He decided to tour the country talking to young people about the Columbine incident and the lessons he learned about relationships with not only family and God but also with each other and particularly oneself, using the words of wisdom found in a little book.

Shortly after the shooting, the family found Rachel's diary. As they read the many entries she made, the family found that this bright 17-year-old had a better understanding of life and relationships with others and God than even adults. Rachel's diary and the words and artwork contained inside became the driving force behind Craig's life and his presentation.

Craig's main focus for the Decatur students, which ranged in age from 12 to 18, was to instill the positive message that each and every one of their lives mean something and had worth not only to the people around them but to the world at large.

During the hour-long program, Craig did two dances, one involving middle school principal Devon Courtney and teacher Lindsay Krueger and his unique style he called his Christmas dance. At one point during the Christmas dance, Craig leaped over the rail in front of the bleachers and went into the stands, motivating students to get into the swing of things.

After the program, a long line of students waited to meet Craig, and in some cases, talk about things that weigh heavy on their minds and hearts. And Craig spent time with each one, particularly during his morning and afternoon student and teacher group sessions.

During these sessions, Craig invited students and teachers to take the Rachel's Challenge "which addresses the root causes of school violence -- bullying, prejudice and self-harm through social-emotional learning programs that build connections, hope and resilience. (The Program) improves school culture so that students are able to reach their full potential academically, socially and emotionally" (rachelchallenge.org).

And several Decatur students and faculty took advantage of this offer and signed up to participate in the Rachel's Challenge program.

Around 7 p.m, a small group of families and townspeople gathered in the gym to hear Craig's evening presentation which was modified to fit the family setting. As it was in the morning assembly, those who attended the evening session lined up afterward to meet Craig and, in some cases, relay some of their stories.

No one can ever know just what the Scott family, as well as the families of the 12 others, went through that day, or the days, months and even years after the shooting. But in the case of Craig Scott, he turned the loss of his beloved sister and his two friends into a positive message of hope and love for one another, and a strong belief in a higher power. And, judging from the impact that Craig Scott and Rachel had on the school community in Decatur, the future looks a little brighter for this piece of Northwest Arkansas.

NOTE: The Scott family was cleaning Rachel's room sometime after her death when they moved her dresser and made an unexpected discovery.

On the back of the dresser were a pair of handprints traced out with a pencil. Within one of the hands was written: "These hands belong to Rachel Joy Scott and will someday touch millions of people's hearts."

Her words of wisdom touched Craig in a way that shaped his life and his future. And through Craig Scott, her message has reached well over a million young people and families around the world. Rachel's memory lives on in every heart that her story has touched. 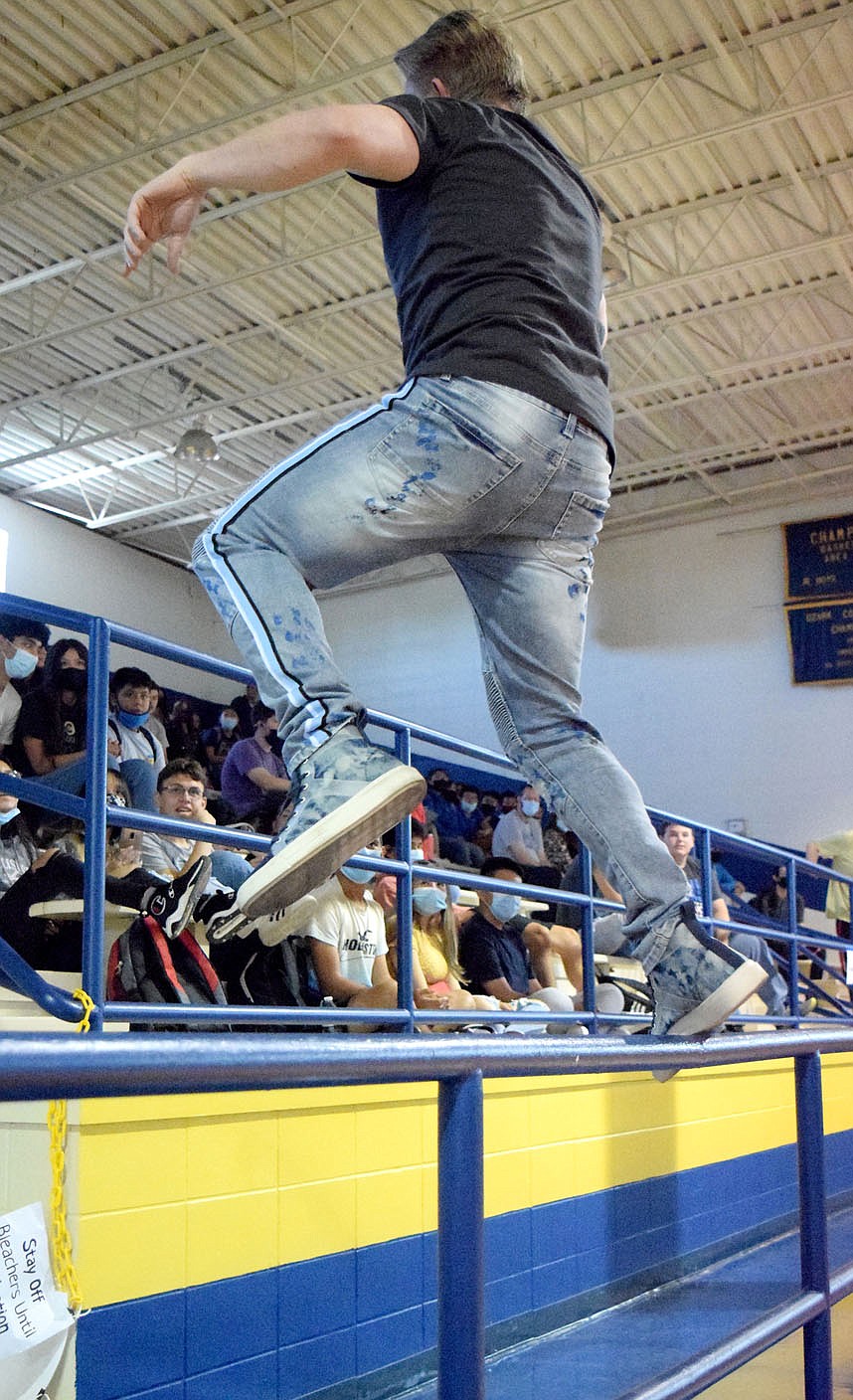 Westside Eagle Observer/MIKE ECKELS As part of motivational dance routine, Craig Scott jumps over a rail in front of the bleachers at Peterson Gym in Decatur Sept. 8 to get the kids into the program. Scott, a surviver of the Columbine High School shooting in 1999, was in Decatur to motivate middle and high school students to be more of a positive influence on their families, friends, community and the world around them. 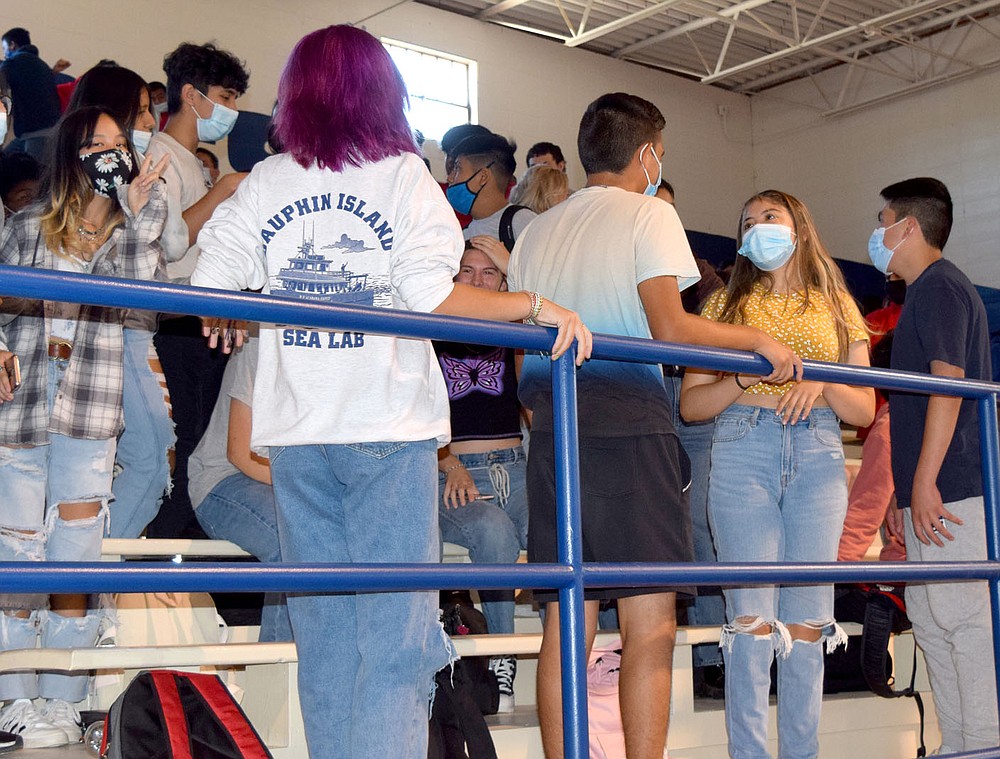 Westside Eagle Observer/MIKE ECKELS Students at Decatur Middle and High Schools take a few minutes to communicate to their friends around them with a hug and warm words of encouragement during a morning assembly at Peterson Gym in Decatur Sept. 8. Motivational speaker and surviver of the Columbine High School shooting Craig Scott was in Decatur to share some of the positive experienced that influenced his life after the tragedy. 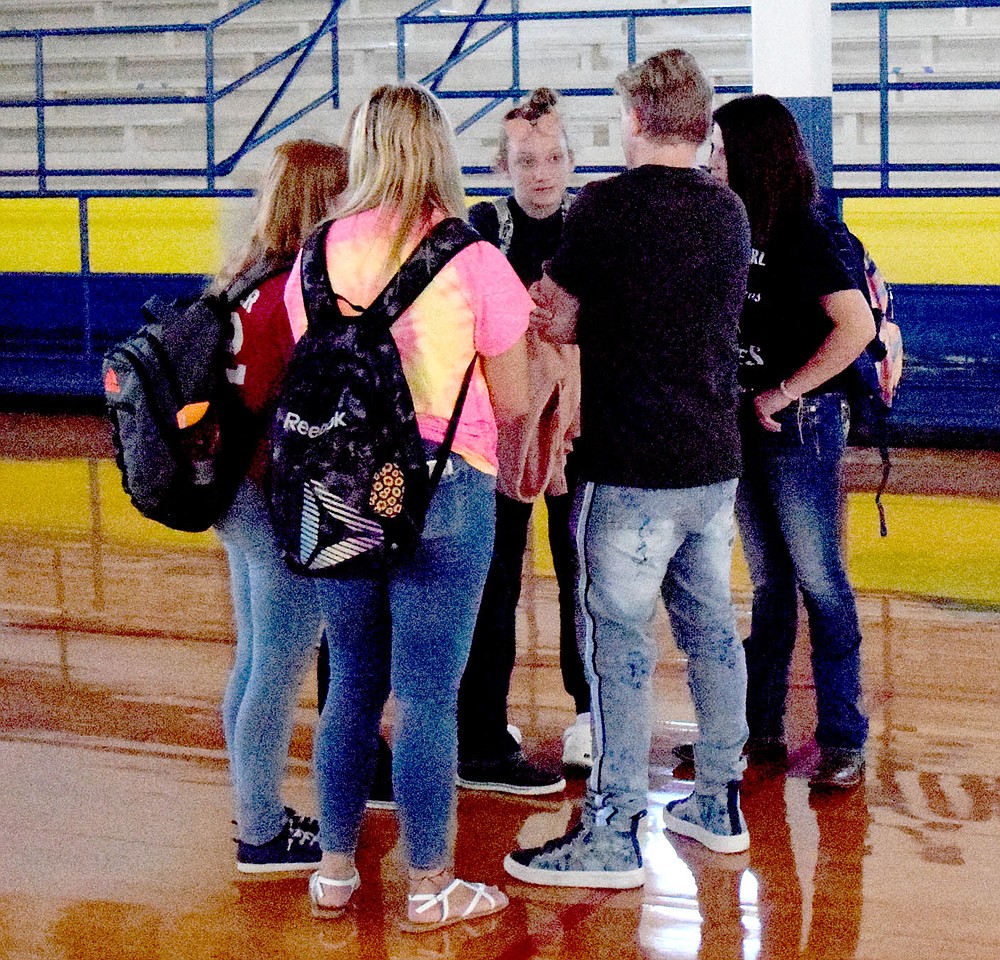 Westside Eagle Observer/MIKE ECKELS Craig Scott (second from right) takes a moment to visit with a group of Decatur High School student after his morning assembly at Peterson Gym in Decatur Sept. 8. Scott was at Decatur High School to give students a more positive outlook on life through kindness and compassion. 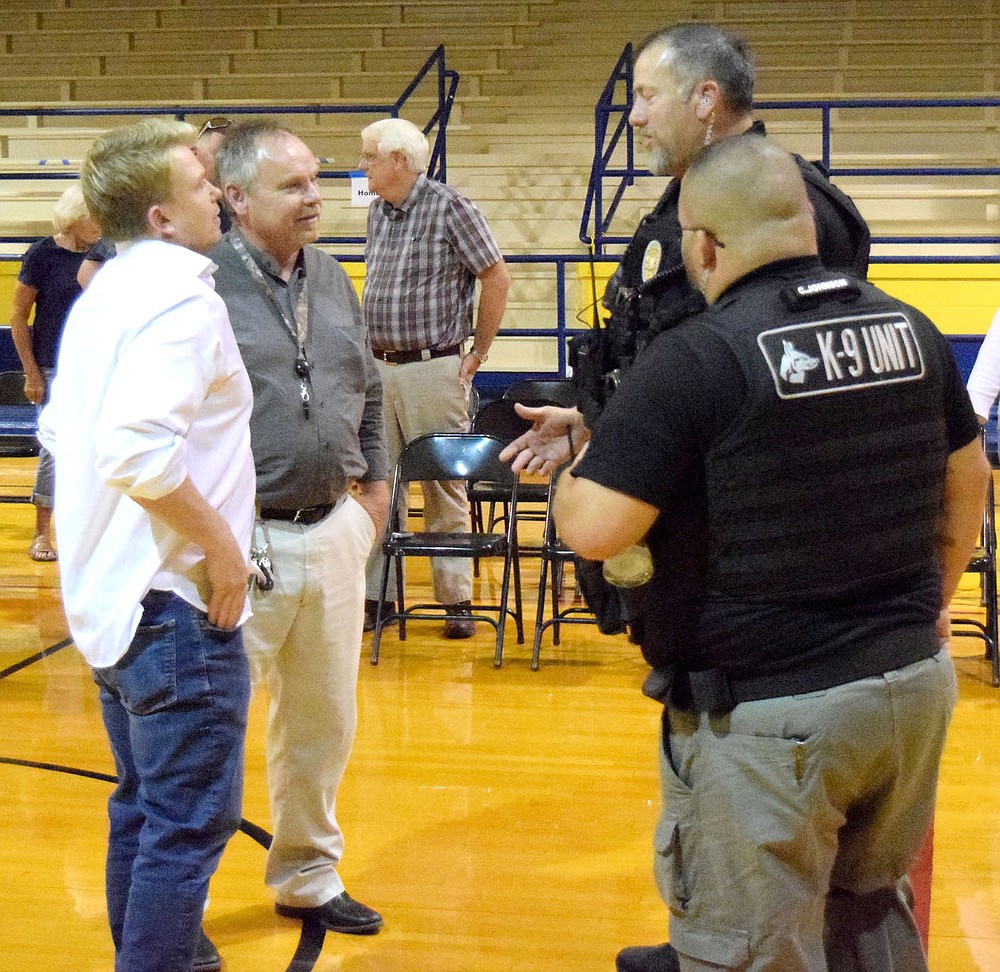 Westside Eagle Observer/MIKE ECKELS Craig Scott (left) talks to school principal Toby Conrad, Chief Steven Grizzle and K-9 Officer Christian Johnson about some of the events that occurred during the April 20, 1999 shooting at his high school in Littleton, Colorado. Scott survive the event but his sister Rachel Joy was the first of 15 victims to lose their life in that tragic event.