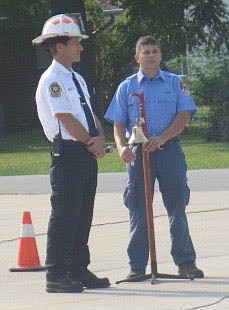 Officers from the Gravette Police Department, members of the neighboring Maysville Fire Department and area first responders assisted in the ceremony which honored fallen firefighters who lost their lives in the attack on the World Trade Center on September 11, 2001.

2,997 people died in the incident when terrorists hijacked two planes and crashed them into the World Trade Center, the single largest loss of life from a terrorist assault on American soil. 441 first responders lost their lives in the aftermath of the attack, the greatest loss of emergency responders on a single day.

Several area citizens gathered in the parking lot for the ceremony which began at 8:45 a.m., the local time at which the first Trade Center tower fell. Fire chief David Orr welcomed those in attendance and gave a brief history of the events of the day. Volunteers from both fire departments and the Gravette police department then read the names of all 343 firefighters and paramedics who lost their lives on that tragic day.

When the names of all victims had been read, the lights on the departments' emergency vehicles were turned on and all participants in the ceremony stood at attention for 3 minutes and 43 seconds to honor their memory. Finally, a fire bell was rung, which Chief Orr explained symbolized the call to return home.

The ceremony lasted about 45 minutes and Chief Orr invited those who wanted to learn more about the events of 9/11/01 to visit the Gravette Public Library where displays were set up relating to the 9/11 memorial observance. A series of 14 posters developed by the 9/11 Memorial and Museum and provided through the National Endowment for the Humanities was displayed in the library windows, explaining the day's events and profiling several survivors of the tragedy. The library exhibit also featured several books from the library's collection relating to the Trade Center attack.

The final poster in the library exhibit concluded the display with the thought-provoking question, "How Will You Remember 9/11?" It read, "Two decades have passed since the 9/11 attacks, and terrorism remains a global threat. We may never be able to prevent all of the actions of people intent on harming others, but we do have control over how we respond to such events. Whether by volunteering in our local communities, serving our nation in the military, caring for the sick and injured, or through other efforts, all of us can help build a world in which we want to live. As we witness history unfolding in our own time, the ways we choose to respond -- both large and small -- can demonstrate the best of human nature after even the worst of days." 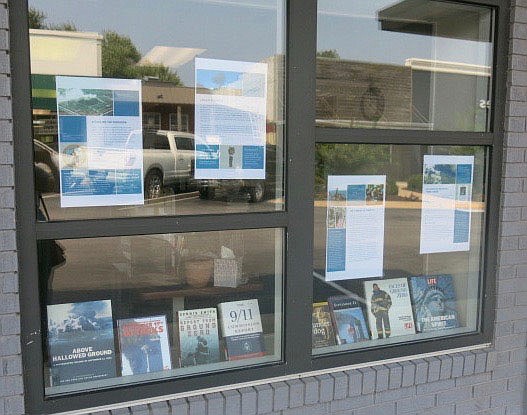 Westside Eagle Observer/SUSAN HOLLAND The front windows at the Gravette Public Library hold a display of posters developed by the 9/11 Memorial and Museum to explain the events of the Sept. 11, 2001, terrorist attack to youngsters who were not yet born at the time of the incident. Also on display are books from the library's collection relating to the attack.

Westside Eagle Observer/SUSAN HOLLAND Gravette fire chief David Orr welcomes guests to the fire department's third annual Sept. 11 remembrance ceremony Saturday morning and reads a brief account of the events of the terrorist attack on the World Trade Center in New York City. This year marked the 20th anniversary of the occasion in which 343 firefighters lost their lives.

Westside Eagle Observer/SUSAN HOLLAND A semi trailer that is part of R&amp;R Solutions trucking fleet memorializes those who lost their lives in the Sept. 11, 2001, terrorist attacks. The trailer, one of a series of vehicles with patriotic designs operated by the company, was parked in CV's parking lot Saturday and served as a dramatic backdrop to the fire department's remembrance ceremony.