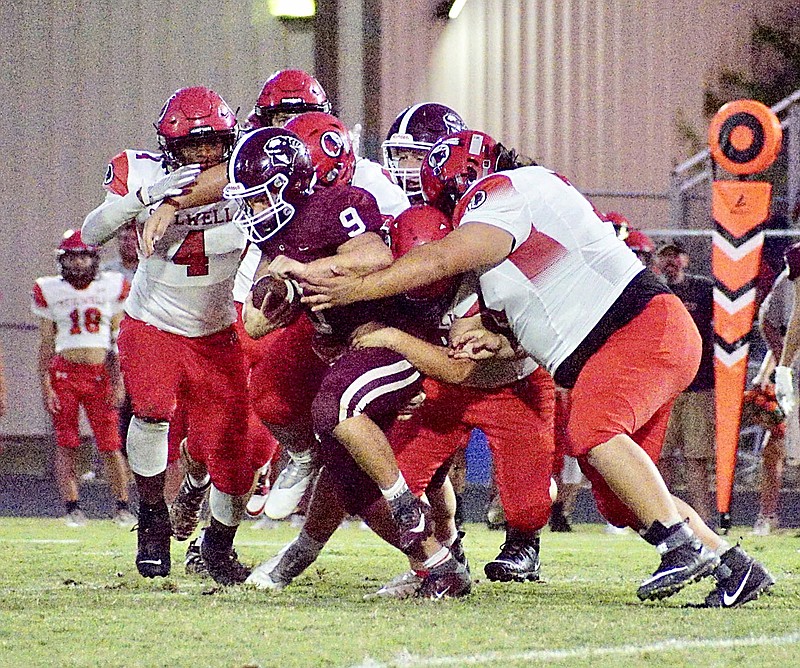 Westside Eagle Observer/RANDY MOLL Gentry senior Zach Gunneman tries to power his way to the endzone against a host of Stilwell defenders in the Friday night game between the Gentry Pioneers and the Stilwell (Okla.) Indians in Pioneer Stadium.

GENTRY -- The fire department in Gentry had a busy night on Friday, sending fireworks into the air every time the Pioneers scored in the game, and that came out to six touchdowns and six points after in the game.

Chris Bell, Gentry's junior quarterback, rushed for 153 yards and scored two touchdowns to lead the unbeaten Pioneers to the nonconference win over Stilwell, Okla., on Friday, 42-7.

Gentry senior Garrison Jackson had a touchdown catch and an interception in the game.

The Stilwell Indians' only touchdown came in the first half, but the Pioneers continued to build on their lead and were up 28-7 by the halftime break.

The Pioneer defense played a big part in the win, sacking the Stilwell quarterback five times. Jonah Summers led his teammates with 10 tackles and an assist in the game.

Gentry, now 3-0, is having its strongest start in recent history.

Justin Bigham, Gentry's head coach, said his team's toughest games lie ahead in 4A-1 competition when the Pioneers face strong teams like Elkins, Prairie Grove and Shiloh Christian. He said he expects the Huntsville Eagles to be the most athletic team his team has met so far this season.

The Pioneers will have a bye this week before opening 4A-1 Conference play at Huntsville on Sept. 24. 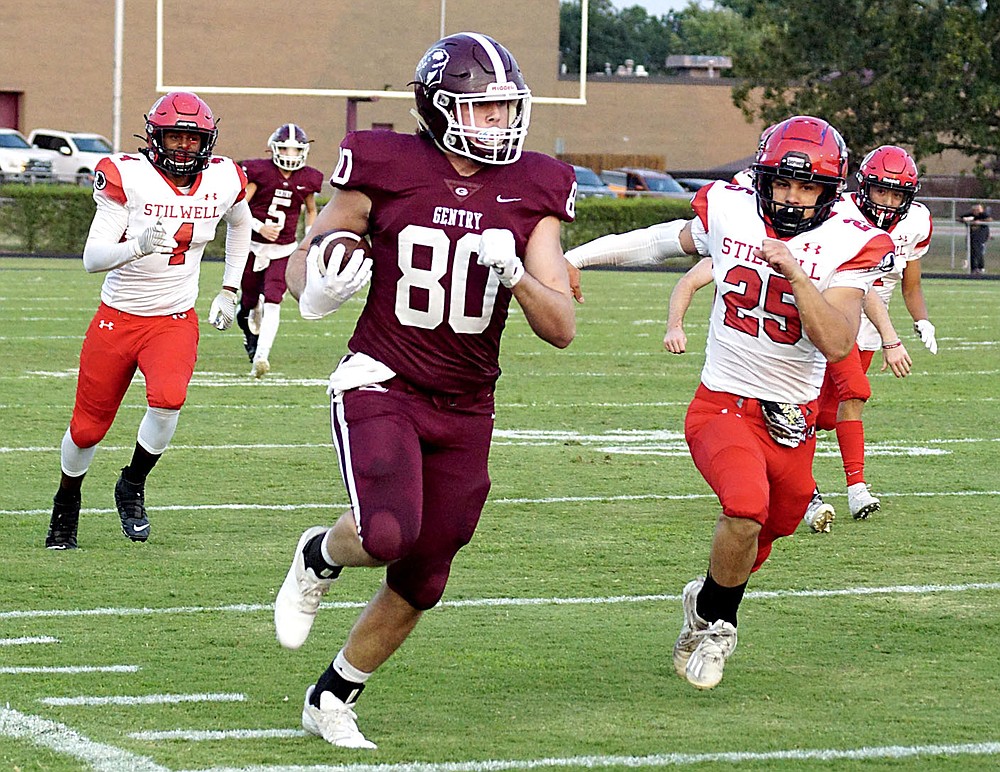 Westside Eagle Observer/RANDY MOLL Gentry senior Garrison Jackson runs the ball for a huge gain early in the Friday night game between the Gentry Pioneers and the Stilwell (Okla.) Indians in Pioneer Stadium. 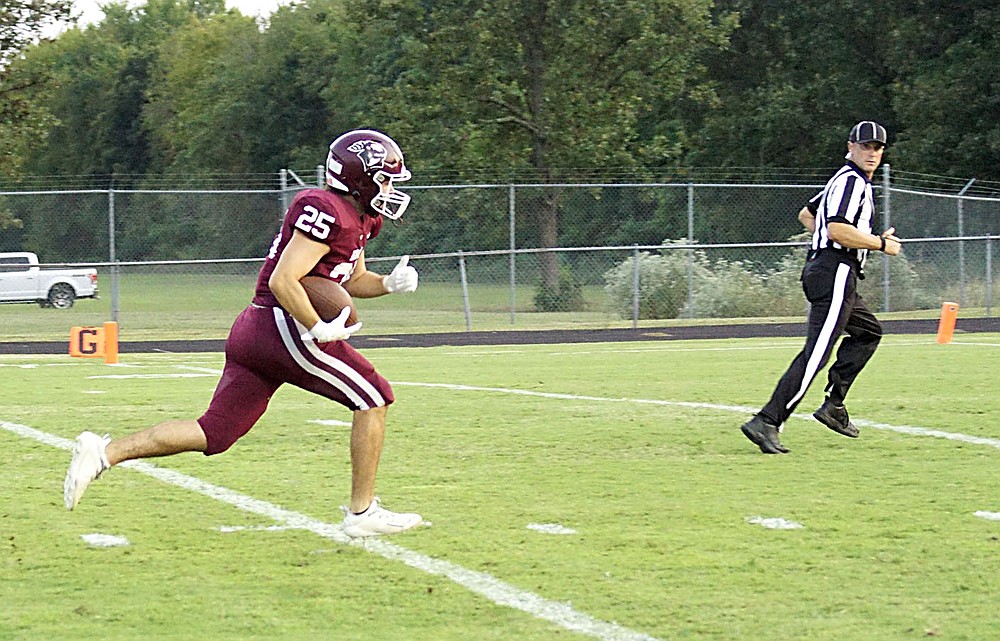 Westside Eagle Observer/RANDY MOLL With no one in his path but the referee, Gentry junior Jonathon Corter breaks away from the Stilwell defenders to run for an early touchdown in the Friday night game between the Gentry Pioneers and the Stilwell (Okla.) Indians in Pioneer Stadium. 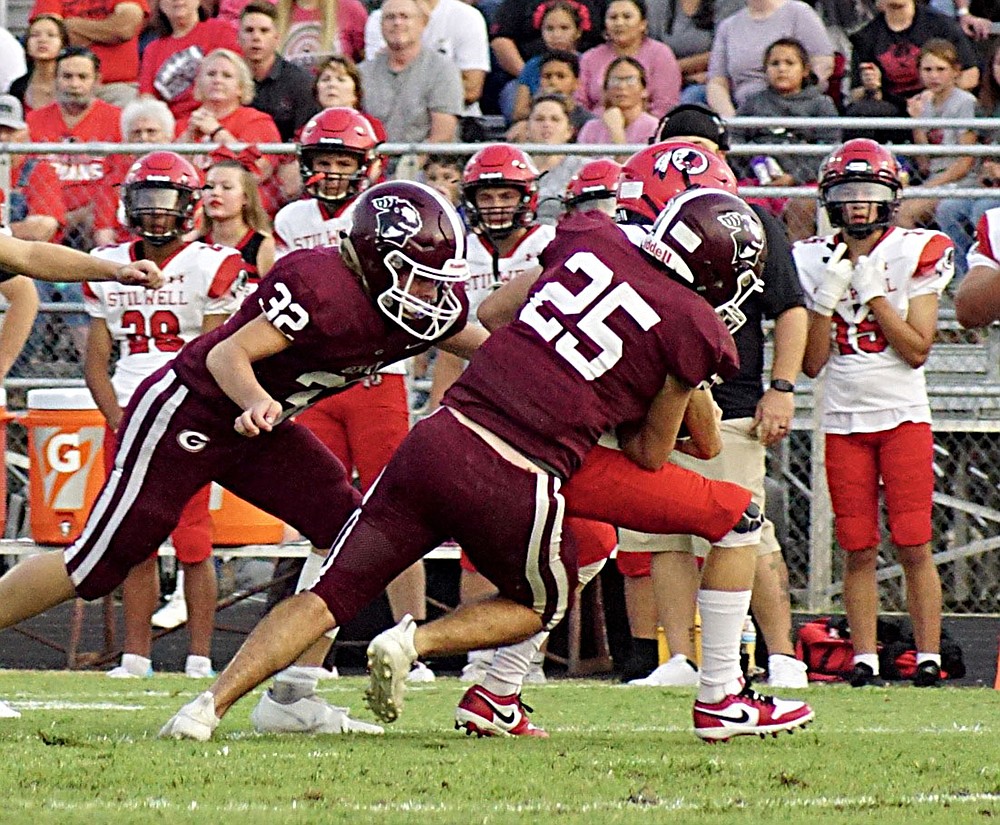 Westside Eagle Observer/RANDY MOLL Gentry junior Jonathon Corter, asisted by sophomore Jered James, puts an end to a Stilwell play during the game between the Gentry Pioneers and the Stilwell (Okla.) Indians in Pioneer Stadium on Friday. 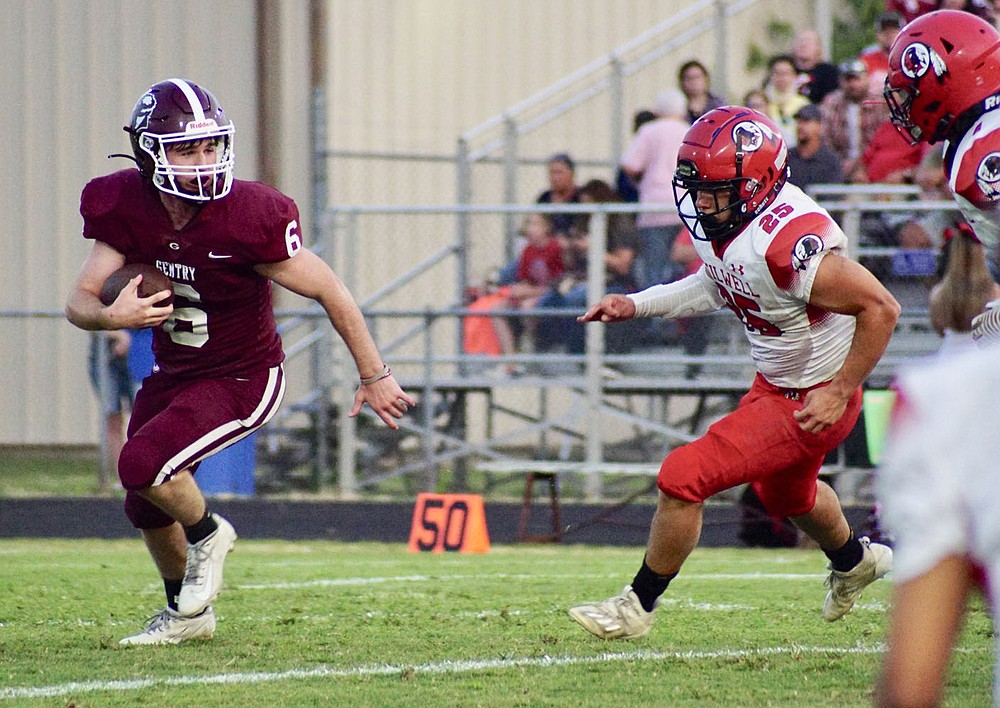