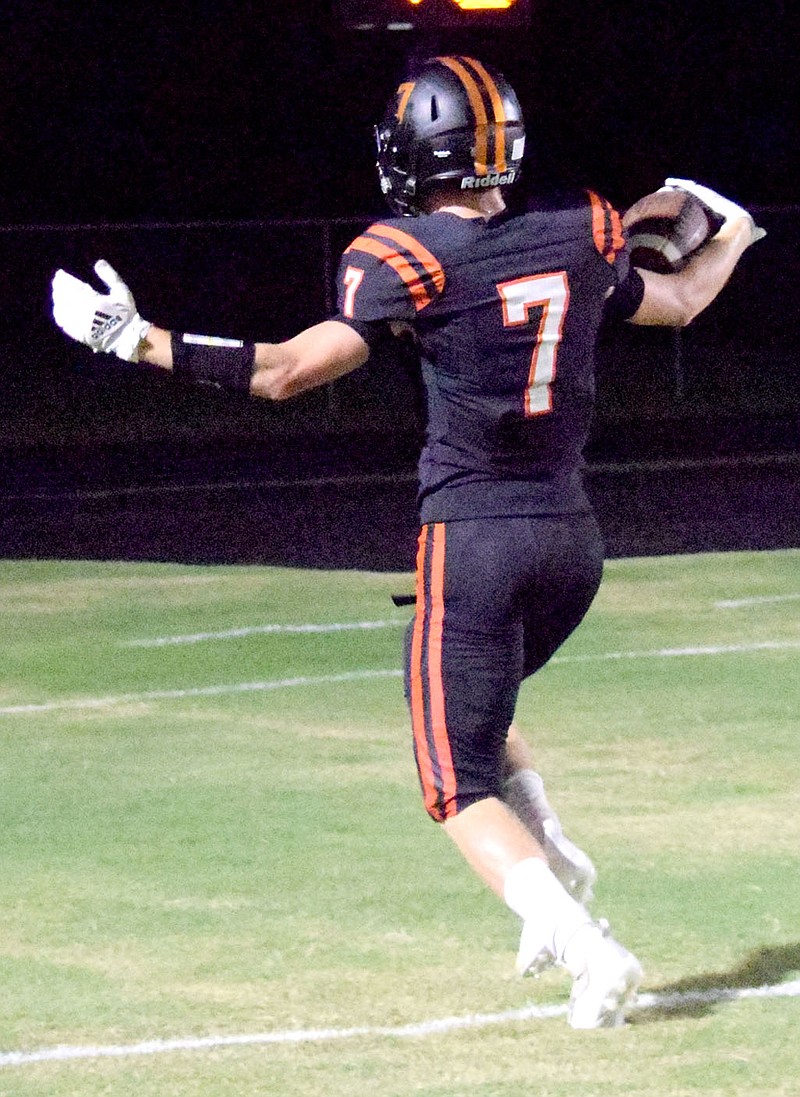 Westside Eagle Observer/MIKE ECKELS Mason Meeker crosses the goal line for the Lions' second touchdown of the night in the fourth quarter of the Gravette-Pryor, Oklahoma, football contest at Lion Stadium Friday night.

GRAVETTE -- It was a clash of the cats at Lion Stadium in Gravette Friday night as the Pryor, Oklahoma, Tigers, a 5A school, locked claws against the hometown Gravette Lions. By the end of the 48 minutes, Lion fans faced yet another disappointment as the Tigers overpowered the Lions by 21 points.

Gravette and Pryor have met several times over the last few years, with the strong Tigers taking the win each time. With a little over 90 seconds elapsed in the first quarter, Kelby Bohannon and his Lion football team knew that they were in for a tough fight ahead.

The Tigers marched downfield nearly 30 yards until, with the ball on the Gravette 33 yard line, quarterback Brunk Gray threw a 15-yard pass that connected with Leonard Lovins who took it into the end zone for the first touchdown of the contest. Gray threw a short pass to Bret Elza who fell over the goal line for a two-point conversion. The score was now 8-0 Tigers.

At the 6:44 mark of the first quarter, a Gray to Lovins pass resulted in the second touchdown for the Tigers. Chase Williams tried for a field goal, but a Gravette defender blocked it and the score was now 14-0 Pryor. A little over a minute later, Lovins took the ball into the end zone for yet another touchdown. Williams' field goal was good and now the Tigers had a 21 point lead over the Lions.

Toward the end of the first quarter, Gray fumbled the ball but was able to recover it. Just before the close of the quarter, Gray faded back to pass and was sacked by Hunter Carter for a loss on the play.

In the second quarter, a hand-off from Gray to Jacob Couch resulted in a 62-yard touchdown. Williams' extra point was good, increasing the Tiger lead by 28 points. A short time later, with the Tigers in possession, Gray elected to keep the ball and ran into the end zone for the final touchdown of the half. Once again Williams' extra point attempt split the uprights and the Tigers increased their lead to 35.

With time running out, the Tigers took possession of the ball and marched it down to the Gravette 30 yard line. On fourth and 10 to go for a first down, the Tiger coaches decided to go for a field goal, sending Williams out for the attempt. His kick was blocked by the Lions and the quarter ended with Pryor leading 35-0 over the Lions going into the halftime break.

Much of the third quarter was a defensive battle between the Lions and Tigers, with both teams nearing the goal line but the other pushing back.

With two minutes left in the quarter and the ball at the Tiger 20 yard line, Rhett Hilger rolled out to his right trying to find one of his receivers. Suddenly his offensive guards created an opening which Hilger used to the Lions' advantage, scoring the first Gravette touchdown. Hilger tried for a conversion but was stopped short of the goal line. Now Gravette was on the scoreboard trailing 35-6.

Toward the end of the fourth quarter, a Gray to Tiger wide receiver pass was picked off by Will Betz who ran the ball for a 15 yard gain before the Tiger defense finally brought him down. Three plays later, a Hilger pass to Mason Meeker resulted in a 24-yard touchdown for Gravette. A hand-off from Hilger to Kyler Austin resulted in a conversion and now the Lions were down by 21 points.

When the final horn sounded, ending the game, the Pryor Tigers defeated the Gravette Lions, 35-14.

The Gravette Lions will be off Sept. 17. 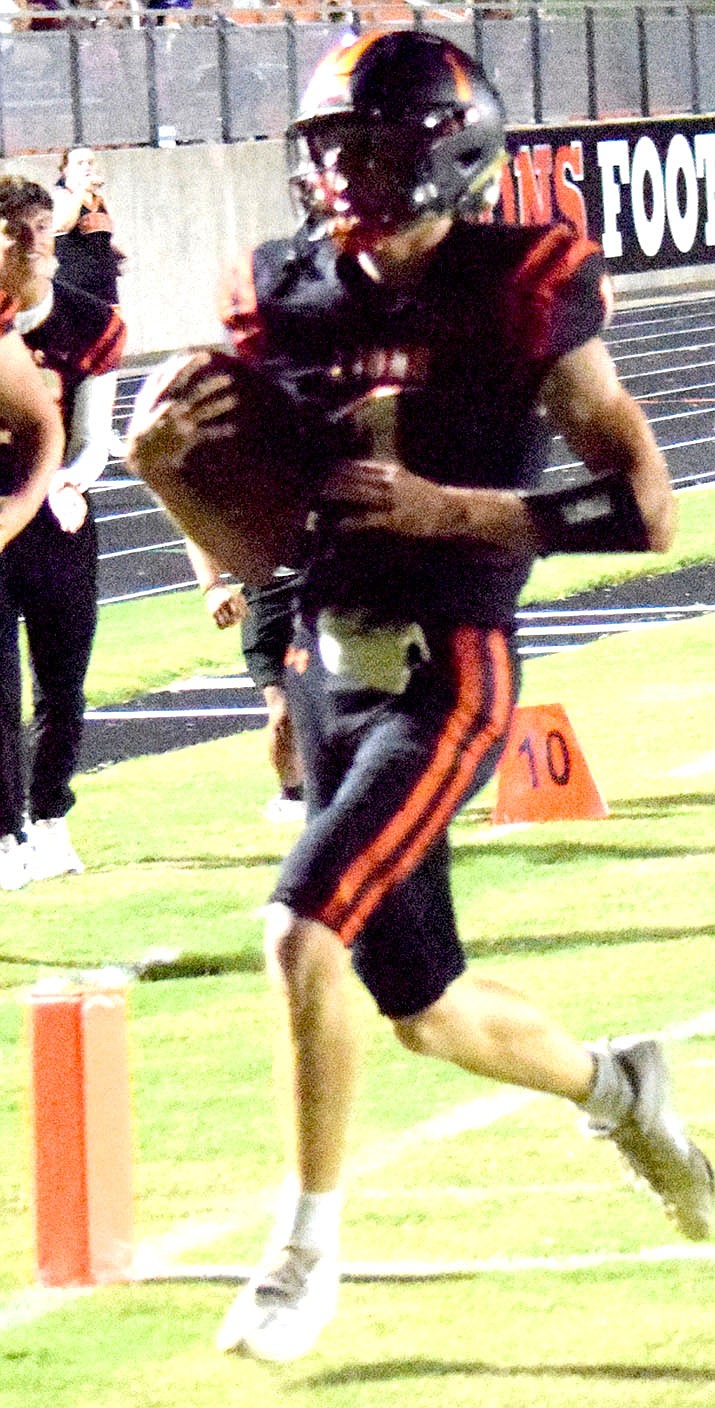 Westside Eagle Observer/MIKE ECKELS On a quarterback keeper, Rhett Hilger eludes several Tiger tackles at the 15 yard line and finds an opening in the end zone for the Lions' first touchdown of the night. The Pryor, Oklahoma, Tigers made the trip to Lion Stadium in Gravette Friday night for a nonconference showdown with the Lions. 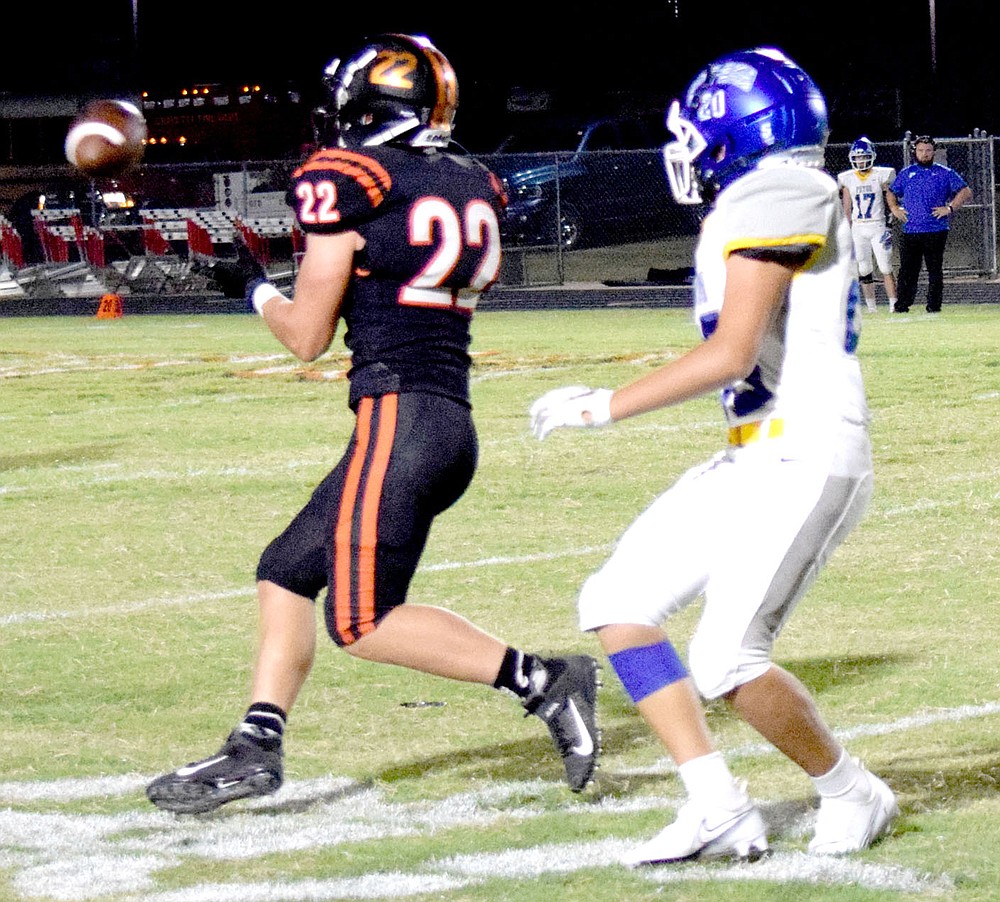 Westside Eagle Observer/MIKE ECKELS Will Betz (Lion 22) picks off a pass intended for a Tiger receiver late in the fourth quarter of the Gravette-Pryor, Oklahoma, nonconference football game in Gravette Friday night. Betz' interception set up the Lions' second touchdown by Mason Meeker about a minute later.

Westside Eagle Observer/MIKE ECKELS A pride of Lions led by Karl Bontrager (Lions 21) descends on a lone Tiger running back, Zachary Vanwinkle (center), during the second quarter of the Gravette-Pryor, Oklahoma nonconference football contest in Gravette Friday night. Eventually Ryder Brown (15), Jace Arnold (4), Bontrager (21), Ethan Ellis (11) and Hunter Carter (8) all piled on top of Vanwinkle, ending the play for a short gain for the Tigers. 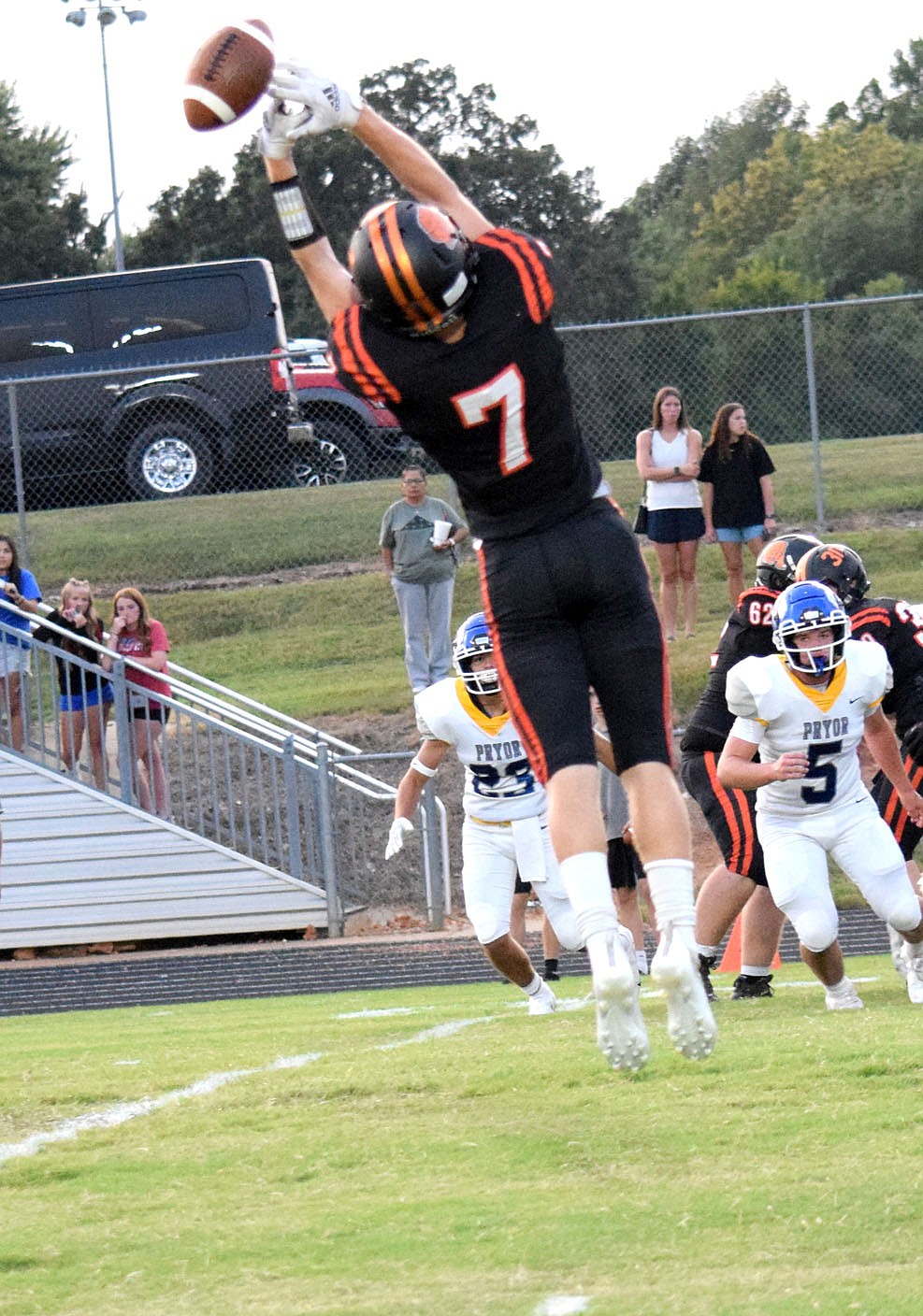