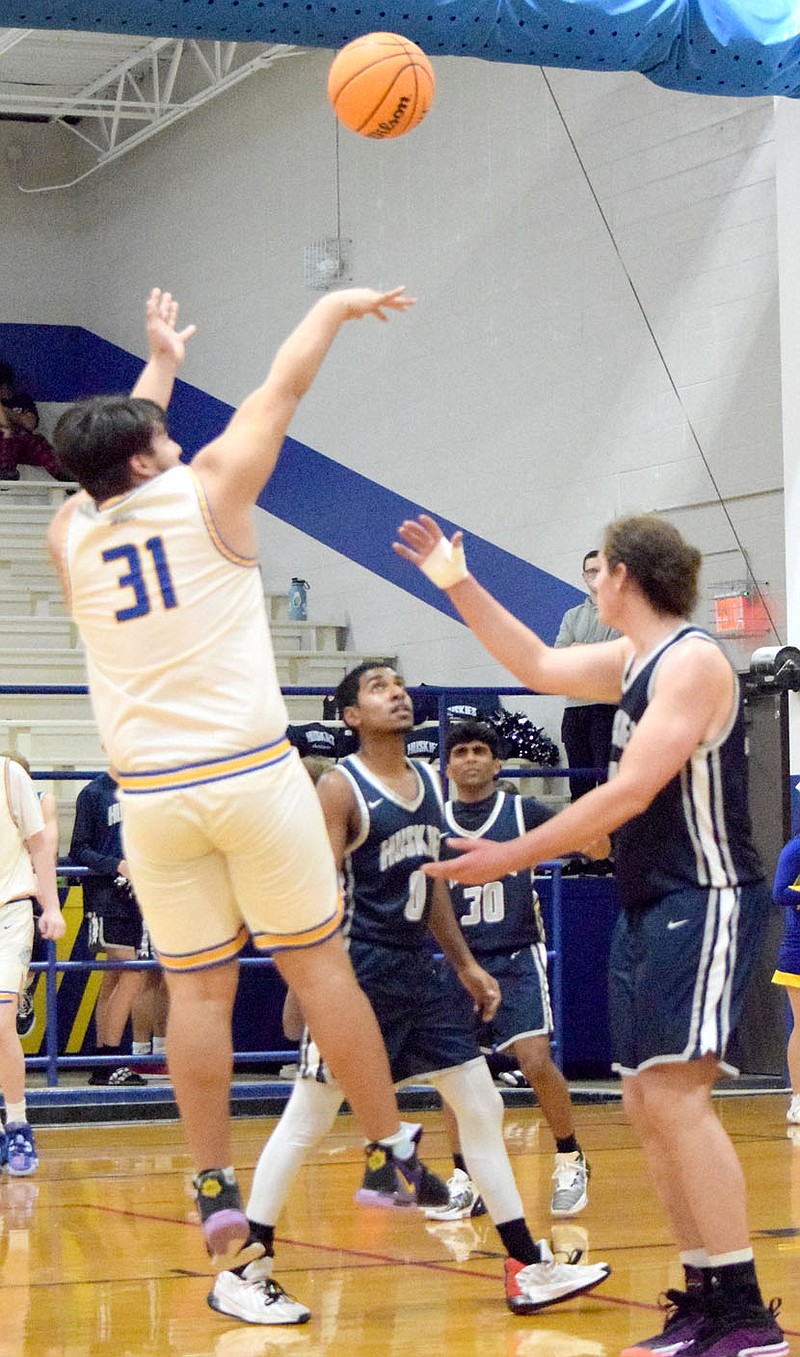 Westside Eagle Observer/MIKE ECKELS Brandon Montano (31) fires a jumper over a pack of Huskies during the fourth quarter of the Decatur-Haas Hall-Bentonville basketball contest in Decatur Nov. 28. The Huskies took the nonconference win, 60-43, over the Bulldogs.

DECATUR -- A long week of fierce competition faced the Decatur Bulldogs as both the varsity and junior high boys played three local teams at home, beginning with the Huskies and ending with the Warriors. The results did not bode well for either Bulldog team.

The Bulldogs kept the game close as the Huskies maintained a marginal lead going into the halftime break, but Haas Hall-Bentonville went on a long run in the fourth quarter and eventually took the win, 60-43, over Decatur.

Leading the way for the varsity Bulldogs were Jackson Montano and JJ Herrera, with 12 points each, followed by Deegan Brooks with 10.

The junior high boys' contest was close to the very end. The junior high Huskies managed to outscore the Bulldogs, 30-8, in the first but the Bulldogs roared back in the second, 29-8, to come up one point short, with Haas Hall-Bentonville taking the win, 38-37, over Decatur.

Bryan Thor led the way with 11 points, followed by Brandon Cruz with seven.

In the second home contest of the week, played Thursday night, the Bulldogs squared off against the Haas Hall-Rogers Danes. The Bulldogs and Danes battled it out throughout the 32-minute contest, with the Danes coming out on top, 68-54.

Zack Kubalnov led all scoring for Haas Hall-Rogers with a total of 35 points.

Deegan Brooks led the Bulldog offensive effort with 16 points. Two other Bulldogs had double-doubles, including JJ Herrera with 13 points and Jackson Montano with 12. Ben Watkins put up 12 points, followed by Devin Thor with three and Cam Vang with two.

The Decatur junior high boys had much better luck over Haas Hall-Rogers, grabbing the lead early and holding on to take a 42-30 victory over the Danes.

Ricky Thor led the scoring with nine points, followed by Josue Lucero with seven, and Marlon Revolario and Brandon Cruz each had five.

In the final contest, played Friday night, the Bulldogs took on the Centerton-based Life Way Christian Warriors. The Warriors jumped out in front early and, by the halftime break, led by 20 points. But the Bulldogs hit the court running after the break and battled back to within seven points with three minutes left to play. But as quickly as the rally began, it went cold, allowing the Warriors to shoot ahead and take the nonconference win, 63-40.

No score was available for the junior high boys' contest. 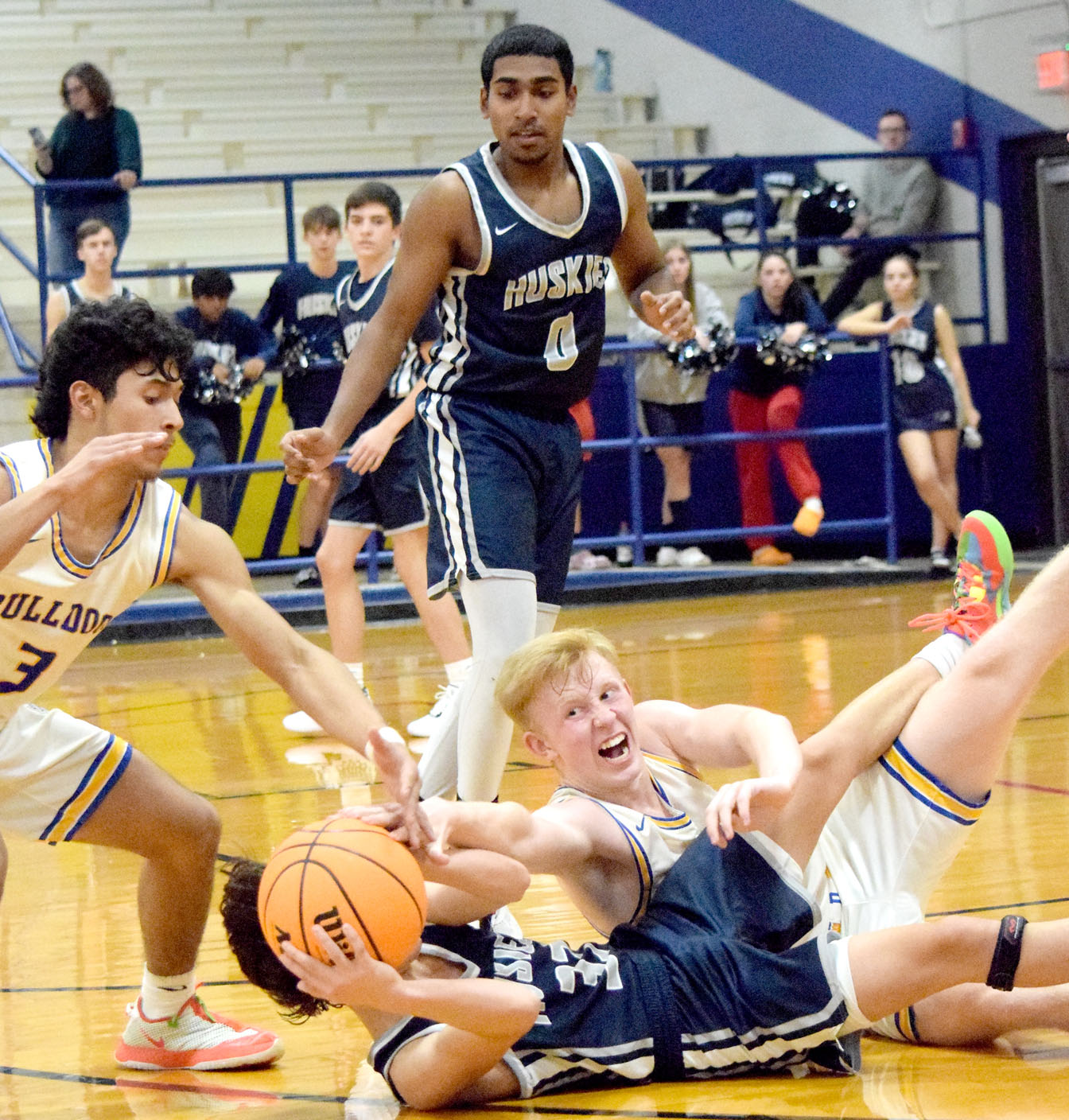 Westside Eagle Observer/MIKE ECKELS Bulldogs Brian Ruiz (3) and Deegan Brooks (right) fight a Husky player for possession of a loose ball during the Decatur-Haas Hall-Bentonville game in Decatur on Nov. 28. 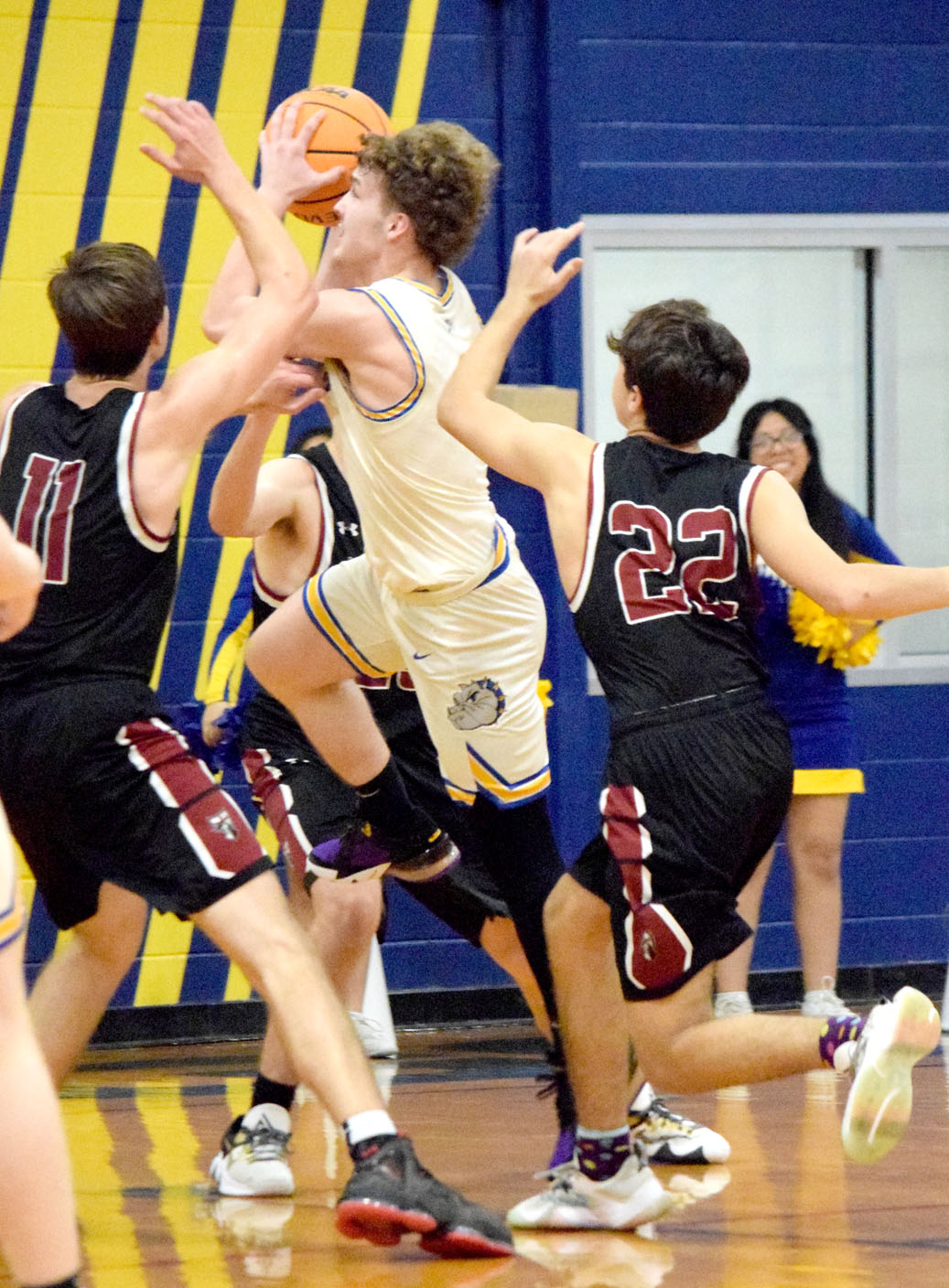 Westside Eagle Observer/MIKE ECKELS Jackson Montano powers his way into a hoard of Warriors to shoot a layup during the Decatur-Life Way Christian varsity basketball game in Decatur Friday night. The Bulldogs pulled to within seven points late in the fourth but a late rally by Life Way gave the Warriors the win. 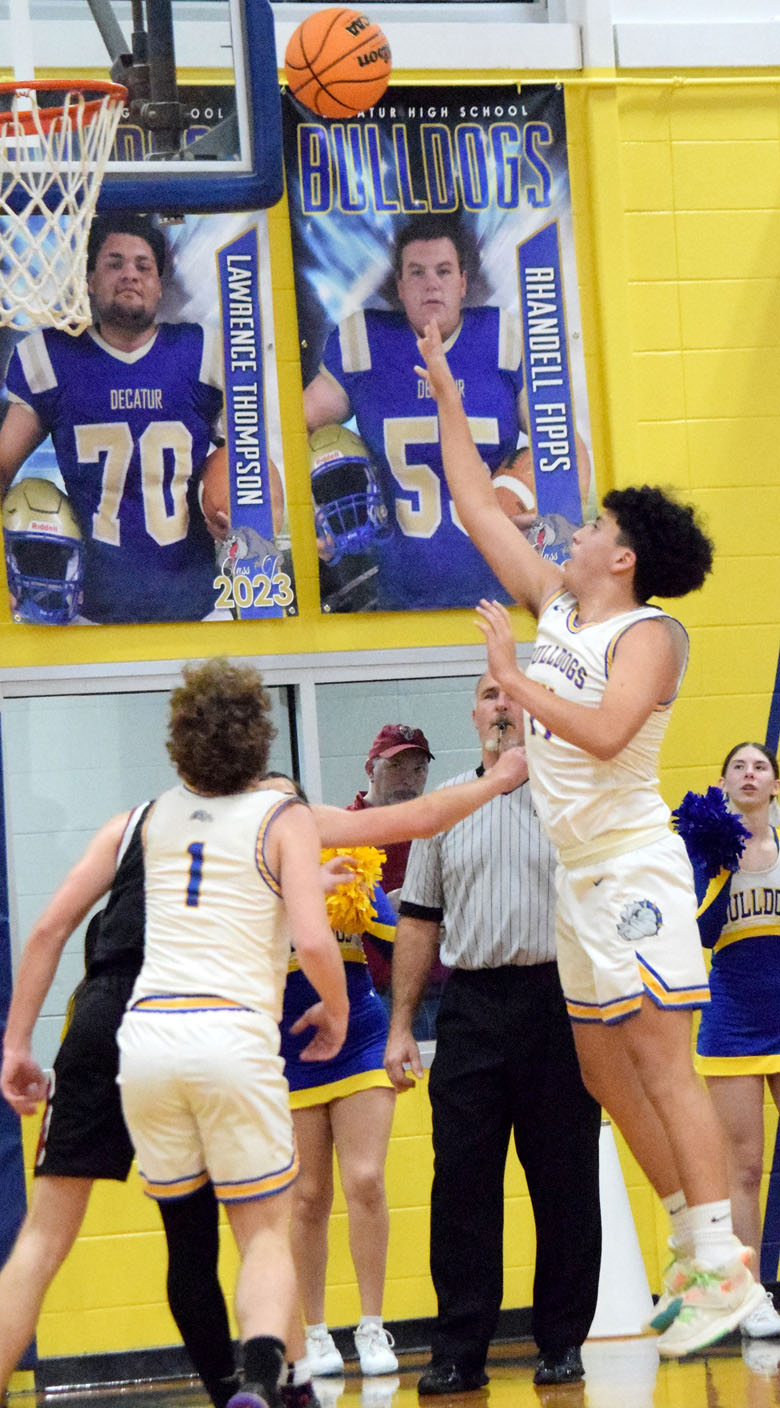 Westside Eagle Observer/MIKE ECKELS Bulldog JJ Herrera manages to put up a jumper from the right side of the lane during the Decatur-Life Way Christian basketball contest at Peterson-Owens Fieldhouse in Decatur Friday night. 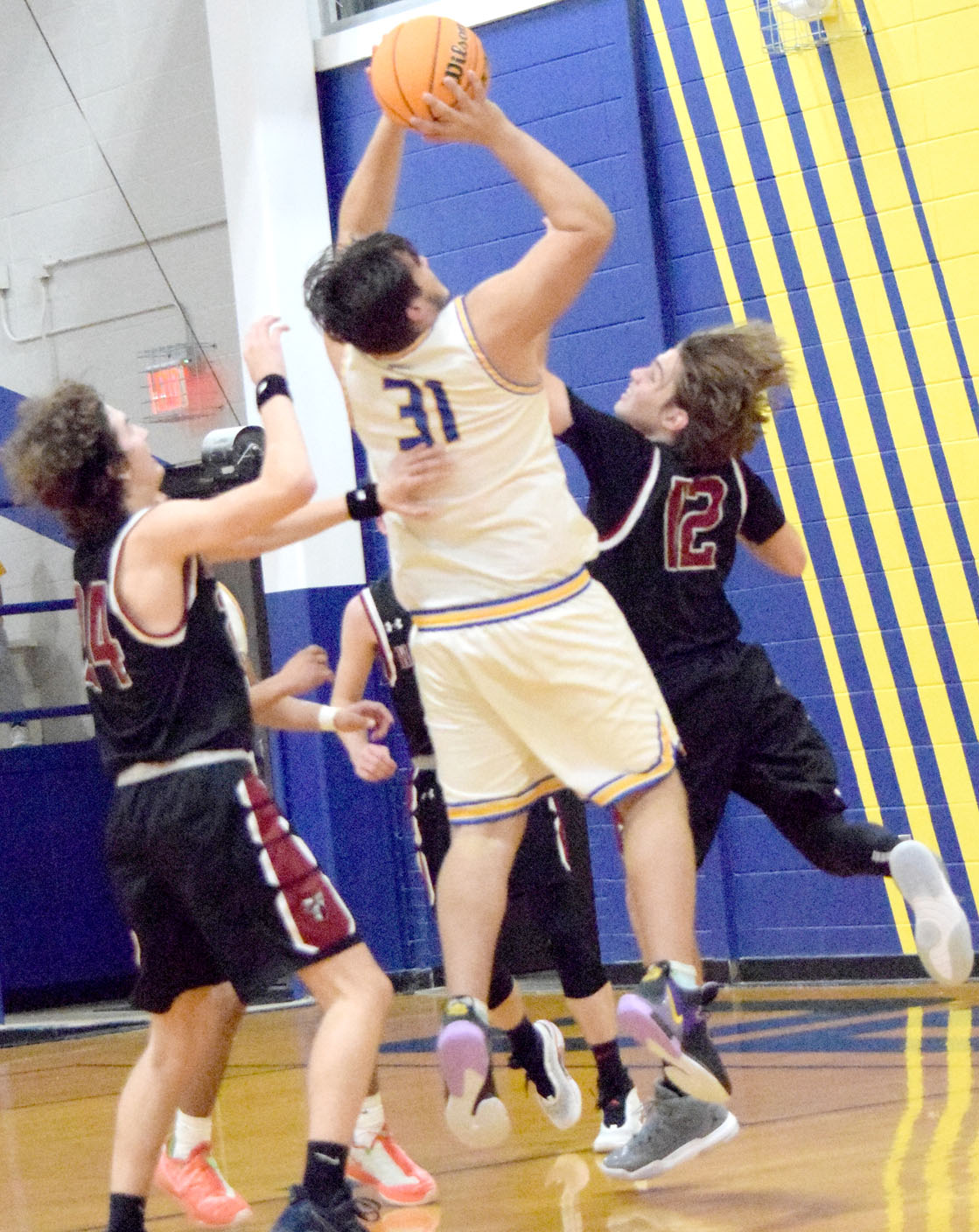 Westside Eagle Observer/MIKE ECKELS Fighting his way through a hoard of Warriors, Bulldog Brandon Montano puts up a jumper during the third quarter of the Decatur-Life Way Christian basketball contest at Peterson-Owens Fieldhouse in Decatur Friday night. Montano had a pair of back-to-back field goals that sparked a Bulldog run late in the third quarter.