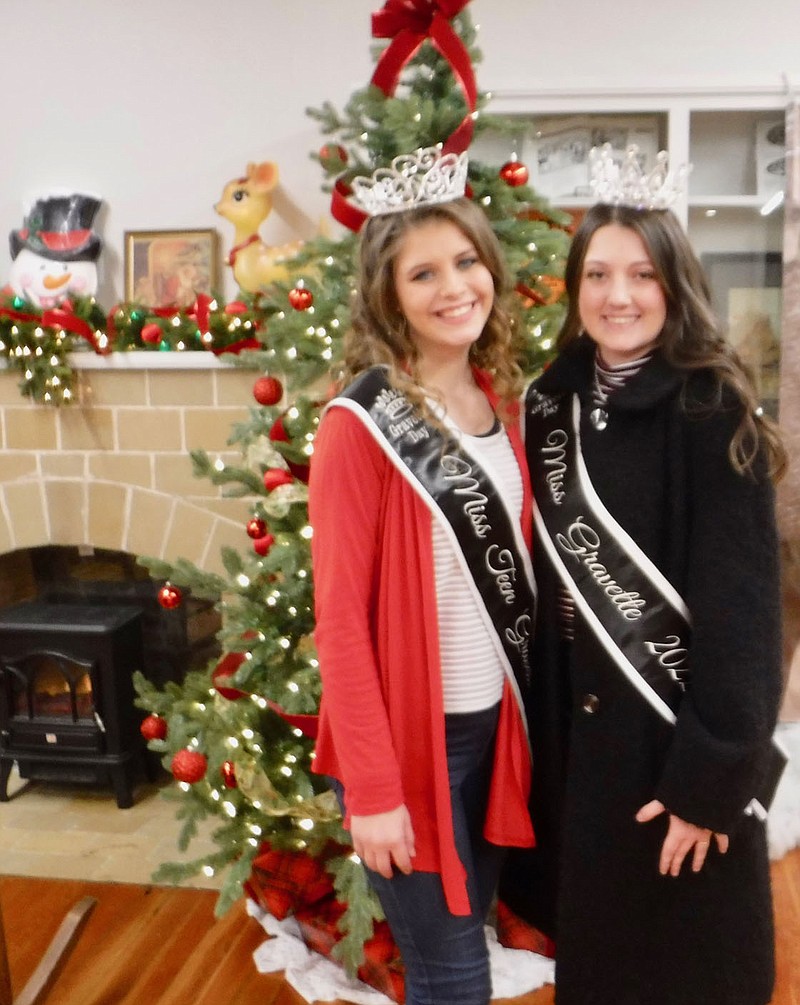 Westside Eagle Observer/SUSAN HOLLAND Brooklyn Parker, Miss Gravette Preteen 2022, and Keeli Moore, Miss Gravette 2022, pause for a photograph at the Gravette Community Building Saturday evening. Both young ladies rode in the annual Christmas parade and were on hand afterward at the chili cookoff and at the community building to visit with guests enjoying the evening.

GRAVETTE -- Many Gravette residents and citizens from throughout the area enjoyed a "Holly, Jolly Christmas" Saturday evening, Dec. 3. The weather cooperated beautifully and the north winds that had been forecast held off during the event, with temperatures just cold enough to put one in the holiday spirit.

The festivities began at 4 p.m. when the Gravette Public Library hosted an open house at its location on Main Street. Members of the Friends of the Library served hot cocoa, hot cider and cookies baked by ladies from the Jolly Good Times Home Demonstration Club. Visitors waited in long lines to sample the treats, and it was estimated over 200 persons were served. Youngsters were allowed to select a holiday figurine from a tree in the book sale area.

Gravette fire trucks, police cars and emergency vehicles headed up the parade with lights flashing and sirens sounding. They were followed closely by flagbearers from John E. Tracy American Legion Post and, behind them, members of the Gravette High School marching band playing holiday carols.

Several area churches, organizations and businesses had entries in the parade. Even a few individual families participated, including the Tad and Michaela Beccard family, who won the award for best use of lights in the parade with their vehicle decorated like the Griswold family vehicle in "National Lampoon's Christmas Vacation," Other award-winning parade entries were Charlene Newell, Mrs. Benton County, for best use of theme, and Grand Savings Bank, for best overall entry.

Finally, bringing up the rear of the parade and riding atop a shiny red Gravette fire truck, Santa and Mrs. Claus made an appearance. They waved to onlookers all along the parade route and several youngsters waved back, eagerly showing their excitement at the couple's arrival. The fire truck took Mr. and Mrs. Claus directly to the Gravette Community Room where they sat and listened to the children's requests. Hot cocoa and cookies were served by members of the Gravette Historical Museum Commission to those waiting their turn.

The Kindley House Museum and Museum Annex were open, and several toured the buildings. Bob and Sandy Kelley once again took on the roles of Mr. and Mrs. Kindley and greeted visitors to the Kindley House. Museum commission members were on hand at the annex to answer questions about the exhibits there and serve more cookies.

Meanwhile, out on the museum grounds, members of the Gravette Fire Department and Gravette Police Department set up tables and served bowls of chili in the fifth annual police department/fire department chili cookoff. A wide variety of selections was available, with choices including beef, venison or chicken, spicy or mild, beans or no beans. The fire department even offered accompaniments of tortilla chips, shredded cheese and sour cream.

Visitors sampled the chilis and voted for their favorites with a cash donation. When the contributions were counted, Gravette Police Department came out the winner with a total of $559.75, and Gravette Fire Department collected $433.75. Proceeds will be used for the police department's Shop With A Cop program. 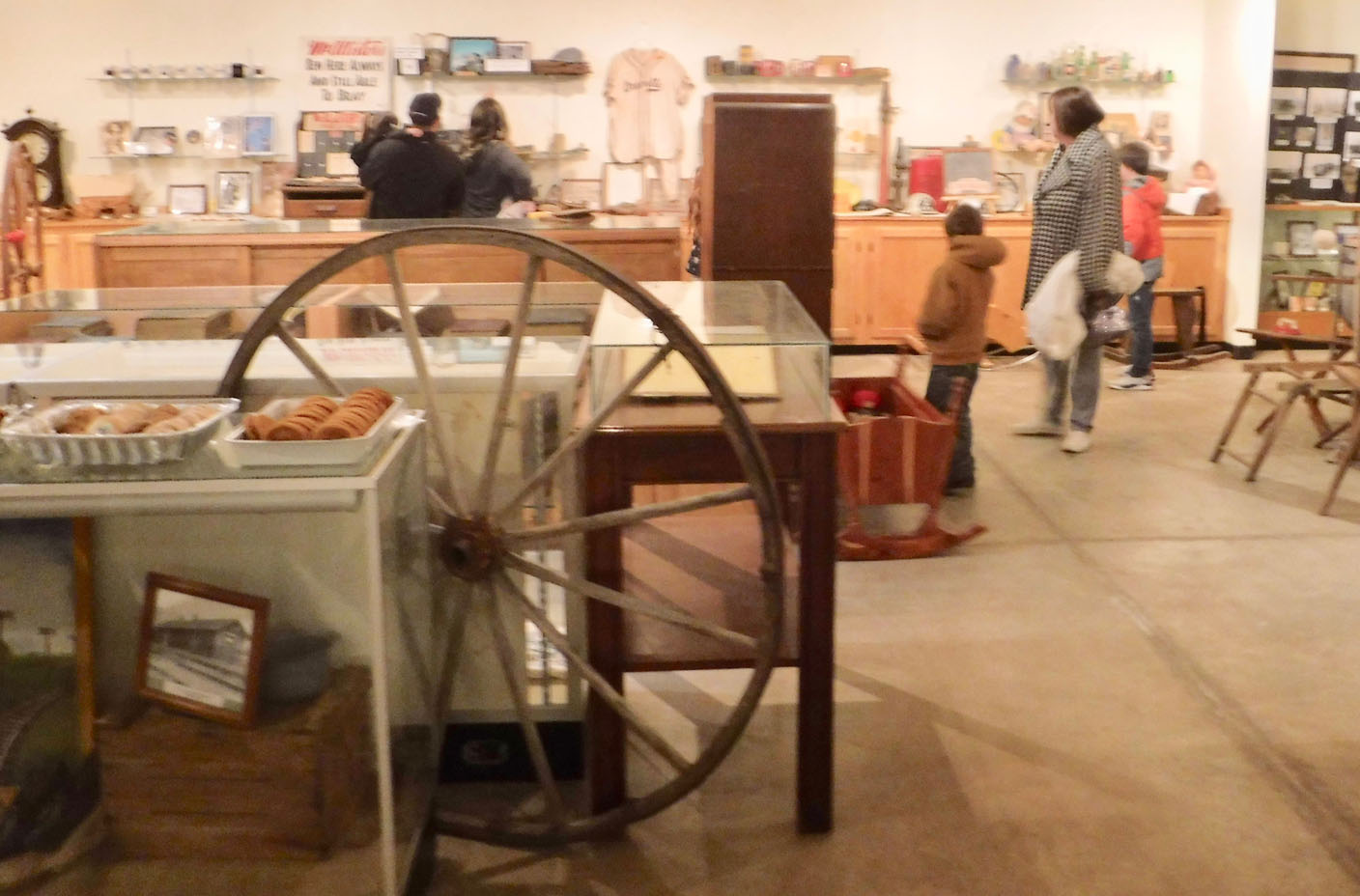 Westside Eagle Observer/SUSAN HOLLAND Guests browse through the exhibits in the museum annex at the Gravette Historical Museum during an open house there during the city's annual Christmas celebration Saturday evening. Both the Kindley House and annex were open for tours and museum commission members served cookies at the annex. 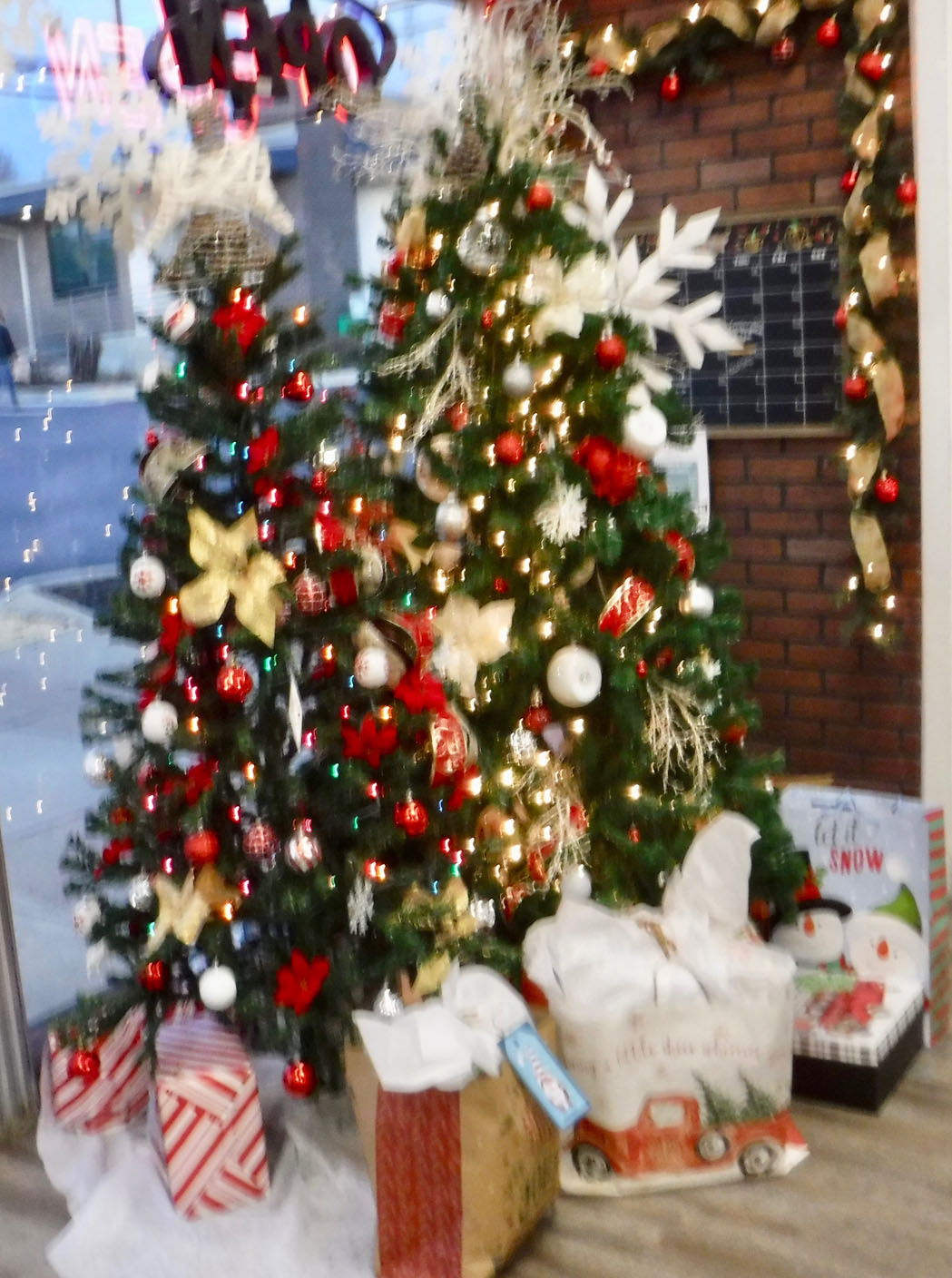 Westside Eagle Observer/SUSAN HOLLAND Marisa Crain, owner of Gravette Nutrition, has decorated her business at 127 Main Street S.E. in Gravette festively for the holidays. These are two of three trees under which gifts are displayed for the Santa to a Senior program. Persons selected names of senior citizens, shopped for those persons and returned wrapped gifts to be delivered to the recipients. 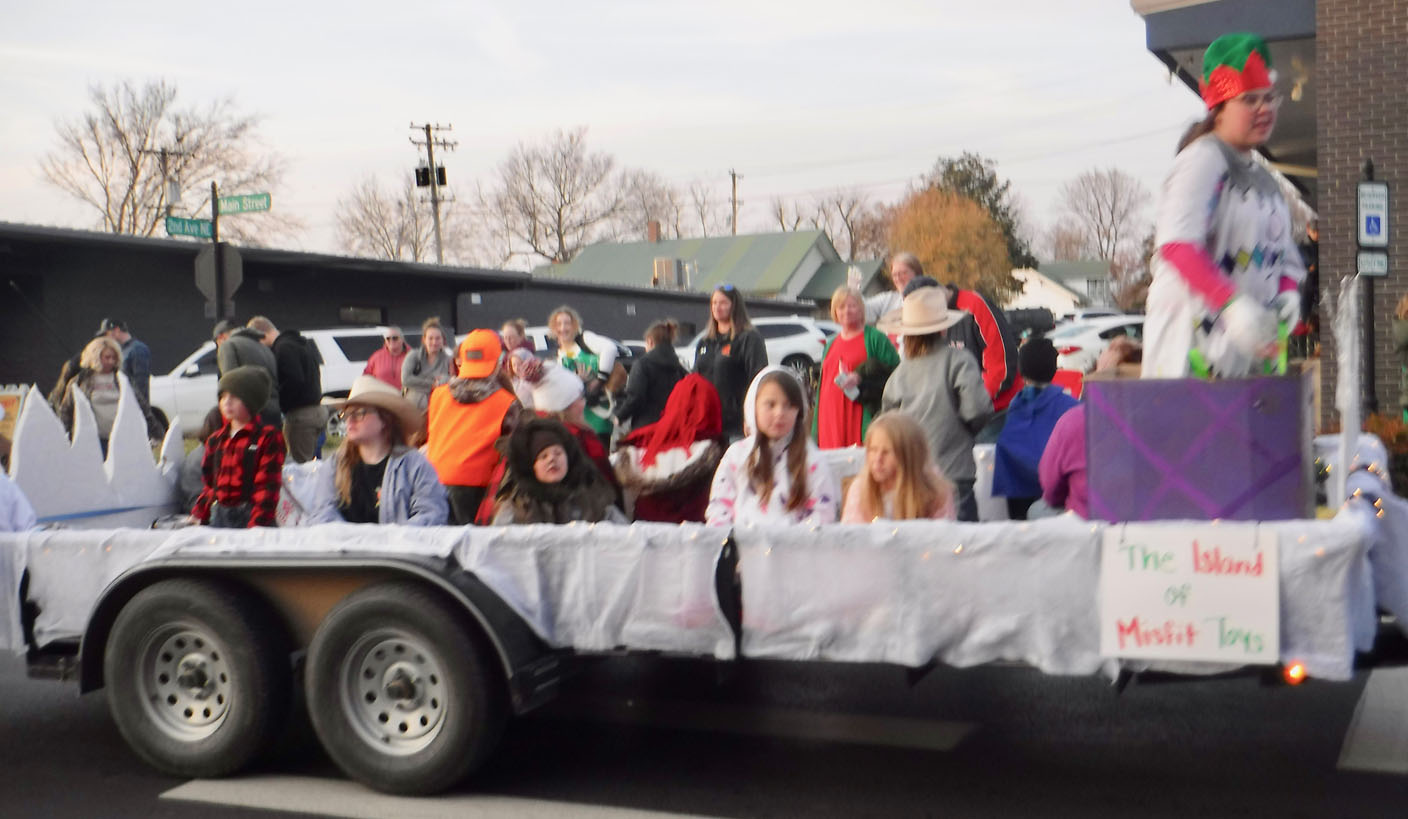 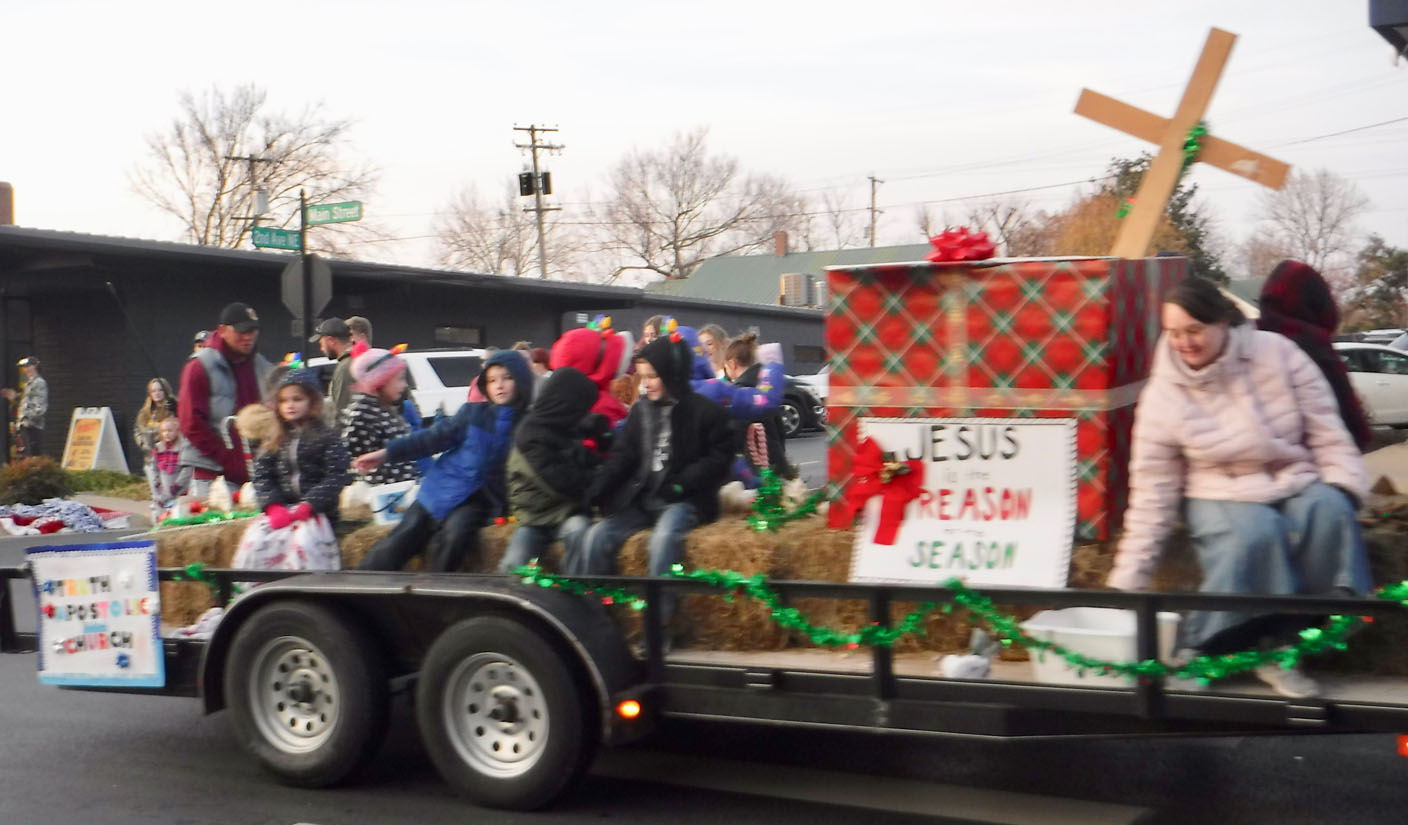 Westside Eagle Observer/SUSAN HOLLAND Members of the Truth Apostolic Church ride on their float decorated with a giant gift package and a cross. Their sign proclaims that "Jesus is the Reason for the Season." Theirs was one of several churches which participated in the annual Gravette Christmas parade. 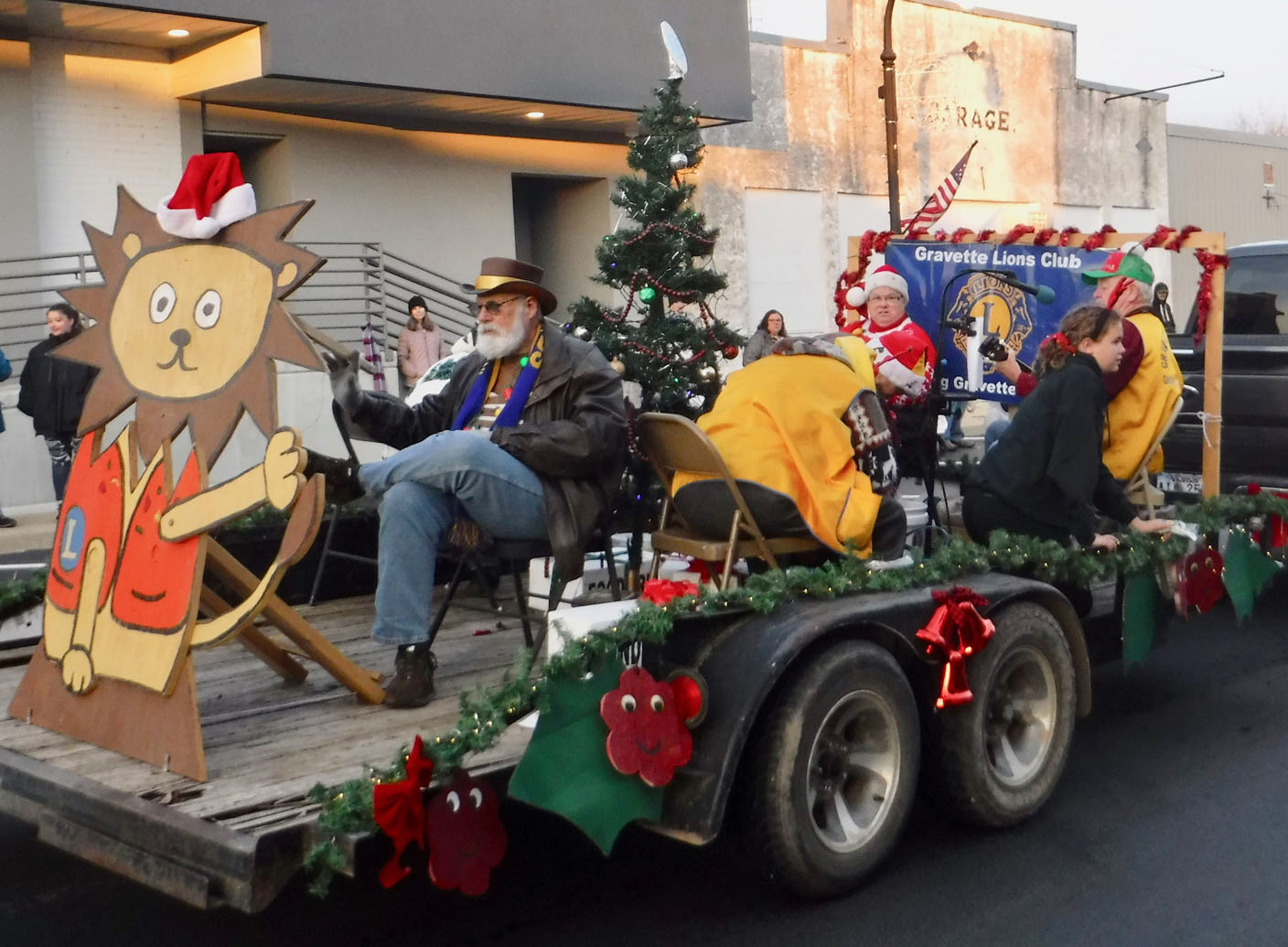 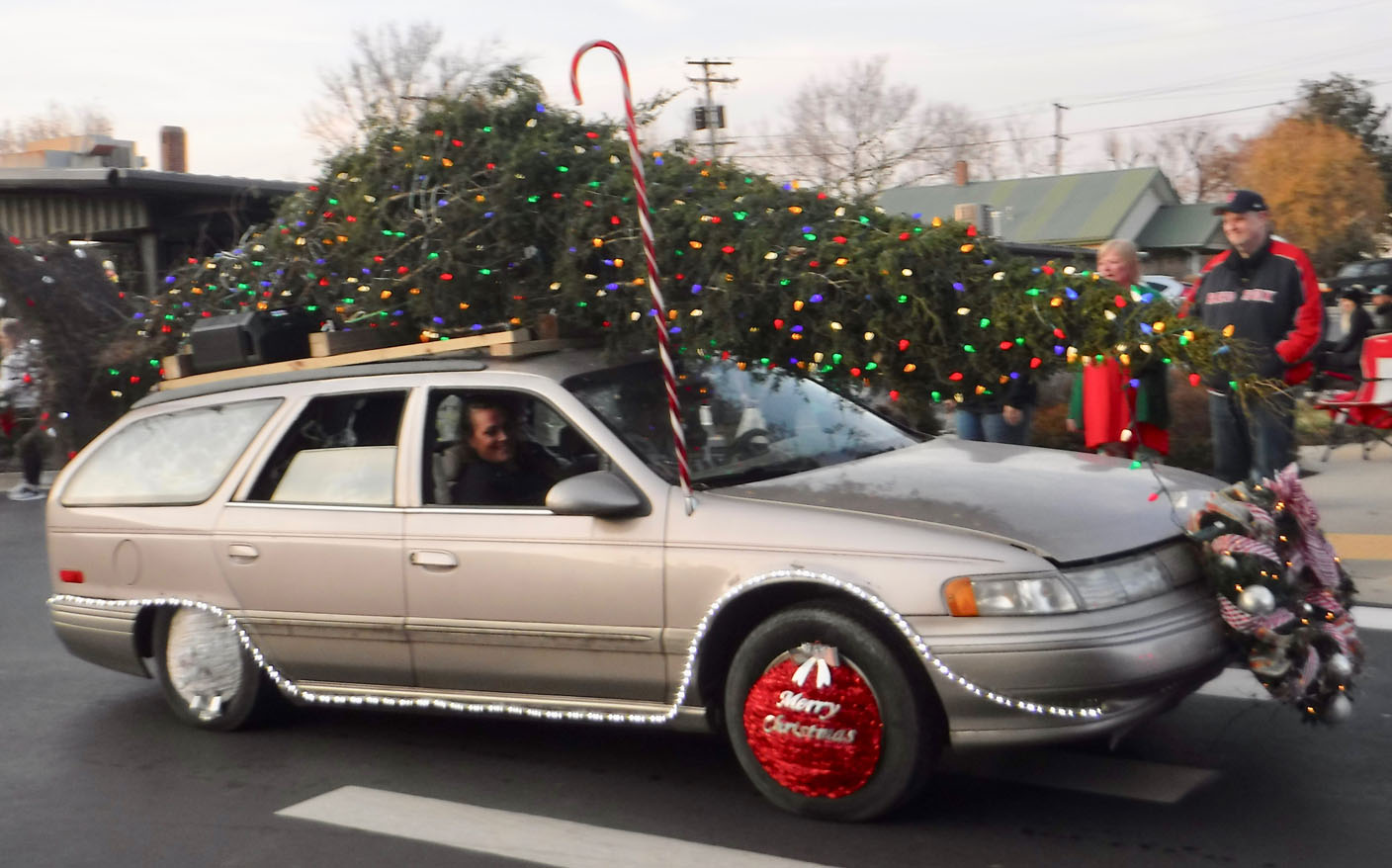 Westside Eagle Observer/SUSAN HOLLAND Members of the Tad and Michaela Beccard family ride down the parade route in the annual Gravette Christmas parade. Their vehicle, with a Christmas tree strapped on top, was decorated like the Griswald family vehicle in National Lampoon’s "Christmas Vacation" movie and won the award for entry with the best use of lights. 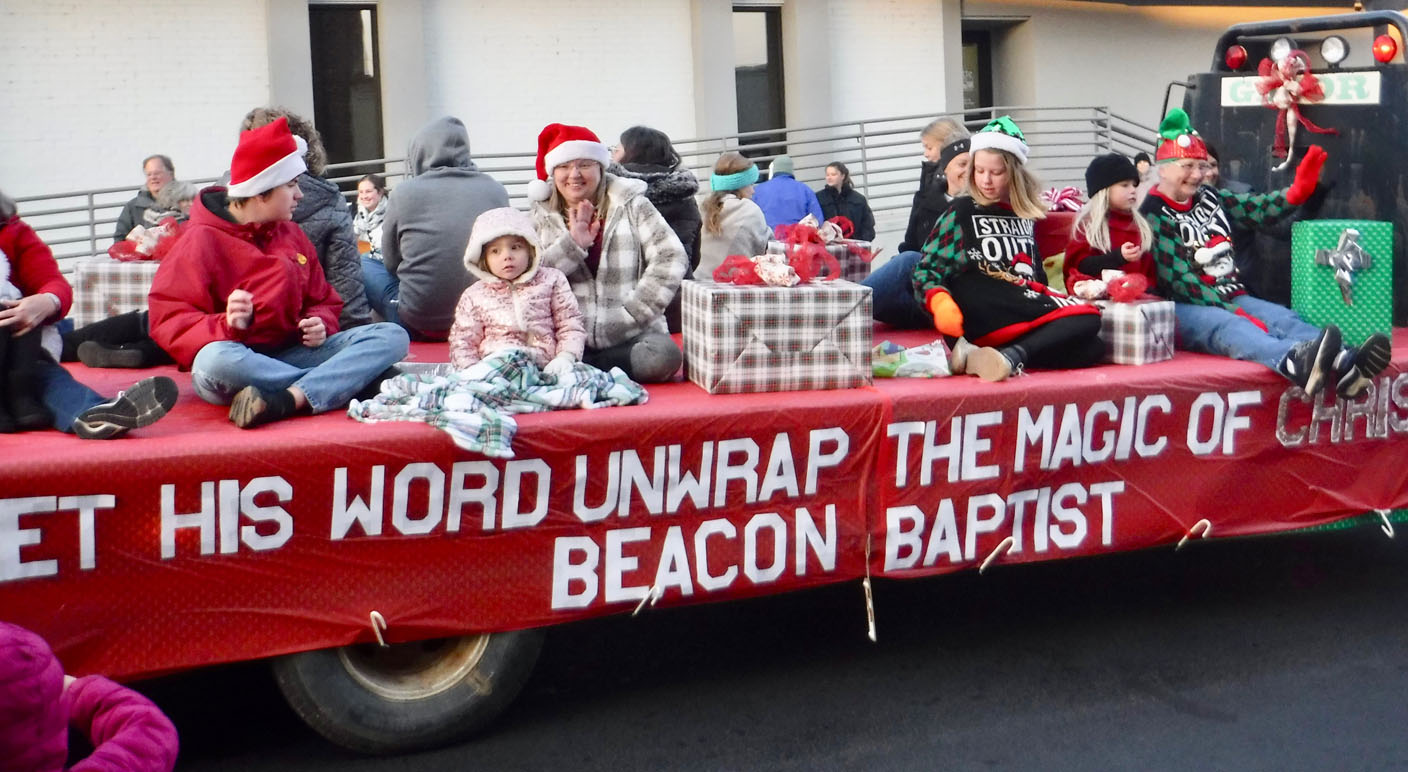 Westside Eagle Observer/SUSAN HOLLAND Several youngsters and a few adult members of the Beacon Baptist Church, some wearing Santa hats, ride on their float decorated with gaily wrapped packages and encourage onlookers to "Let His Word unwrap the magic of Christmas." Beacon Baptist was one of several churches represented with entries in the annual parade. 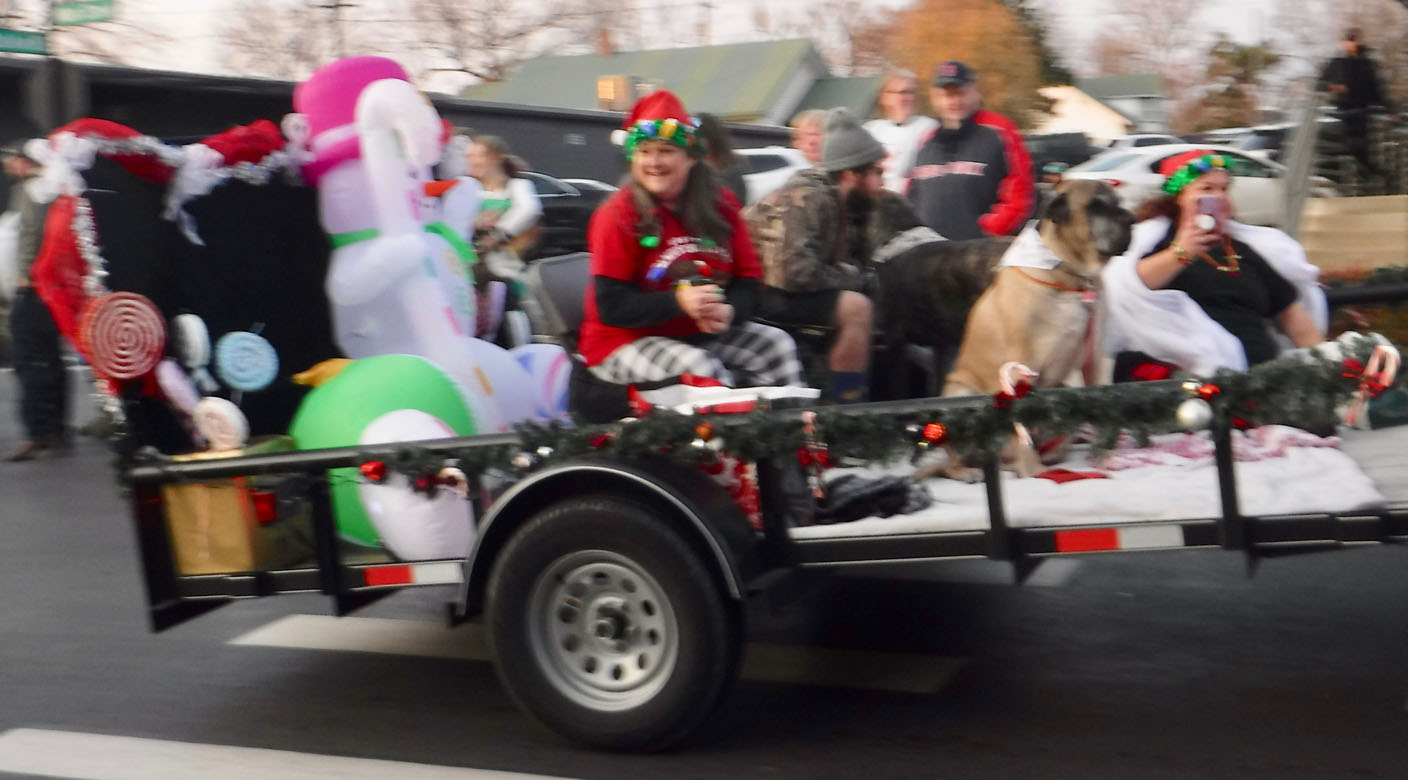 Westside Eagle Observer/SUSAN HOLLAND Representatives of Groomer Has It ride on their float in the annual Gravette Christmas parade. The Groomer Has It entry was decorated with a blowup snowman, giant lollypops, greenery and Christmas ornaments but the most popular feature is always the big dogs, the furry companions staff members bring along for the ride. 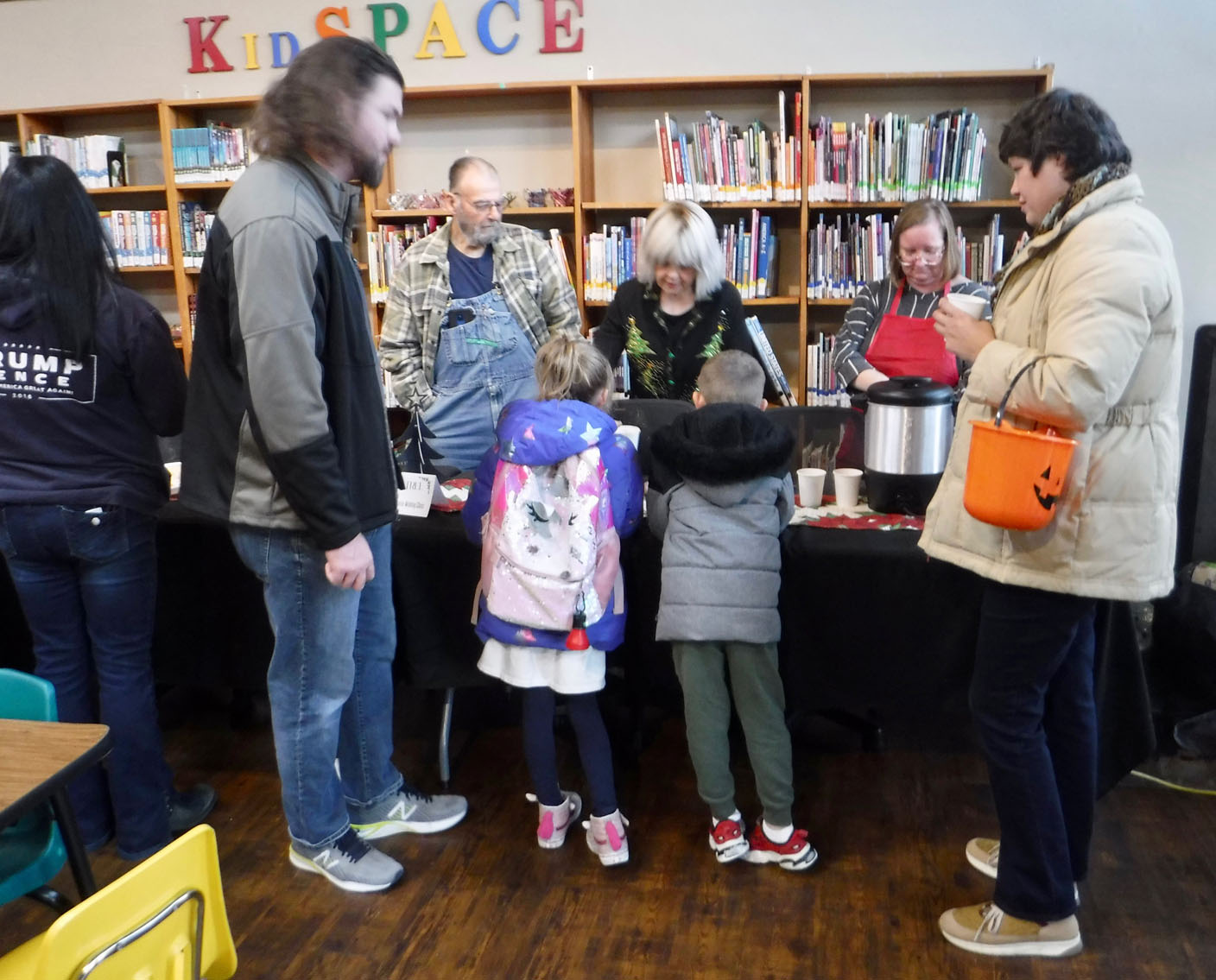 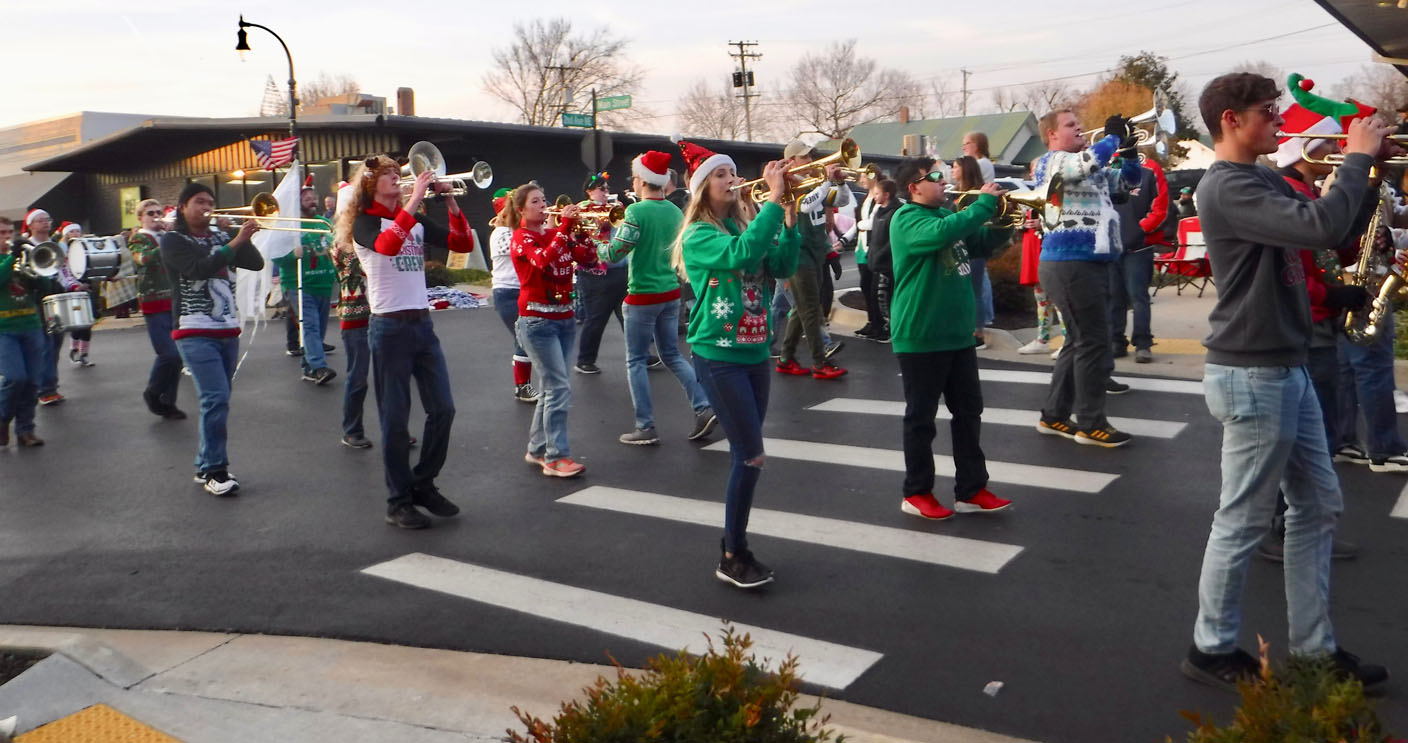 Westside Eagle Observer/SUSAN HOLLAND Members of the Gravette High School marching band make their way down Main Street playing holiday carols during the Christmas parade Saturday evening, Dec. 3. The band is always a popular feature of the annual parade, with members dressed in their holiday finery and promoting Christmas spirit with their seasonal music. 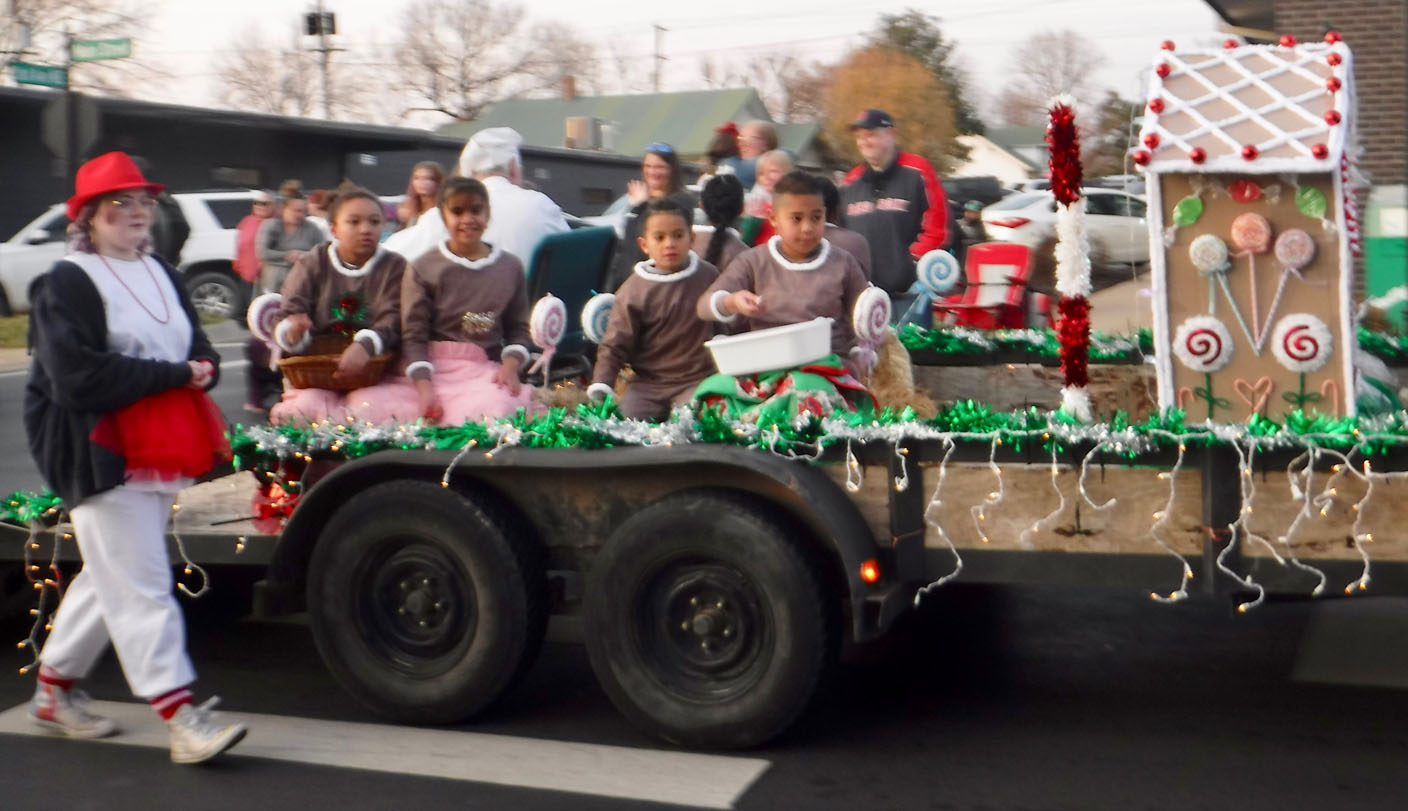 Westside Eagle Observer/SUSAN HOLLAND First Assembly of God Church members ride on their float with a gingerbread theme in Saturday's Gravette Christmas parade. Pastor Jack Deaton, dressed as the baker, rode on the float along with members of the children's church. Here the teacher of the children's church walks beside the float as her class members toss candy to the crowd. 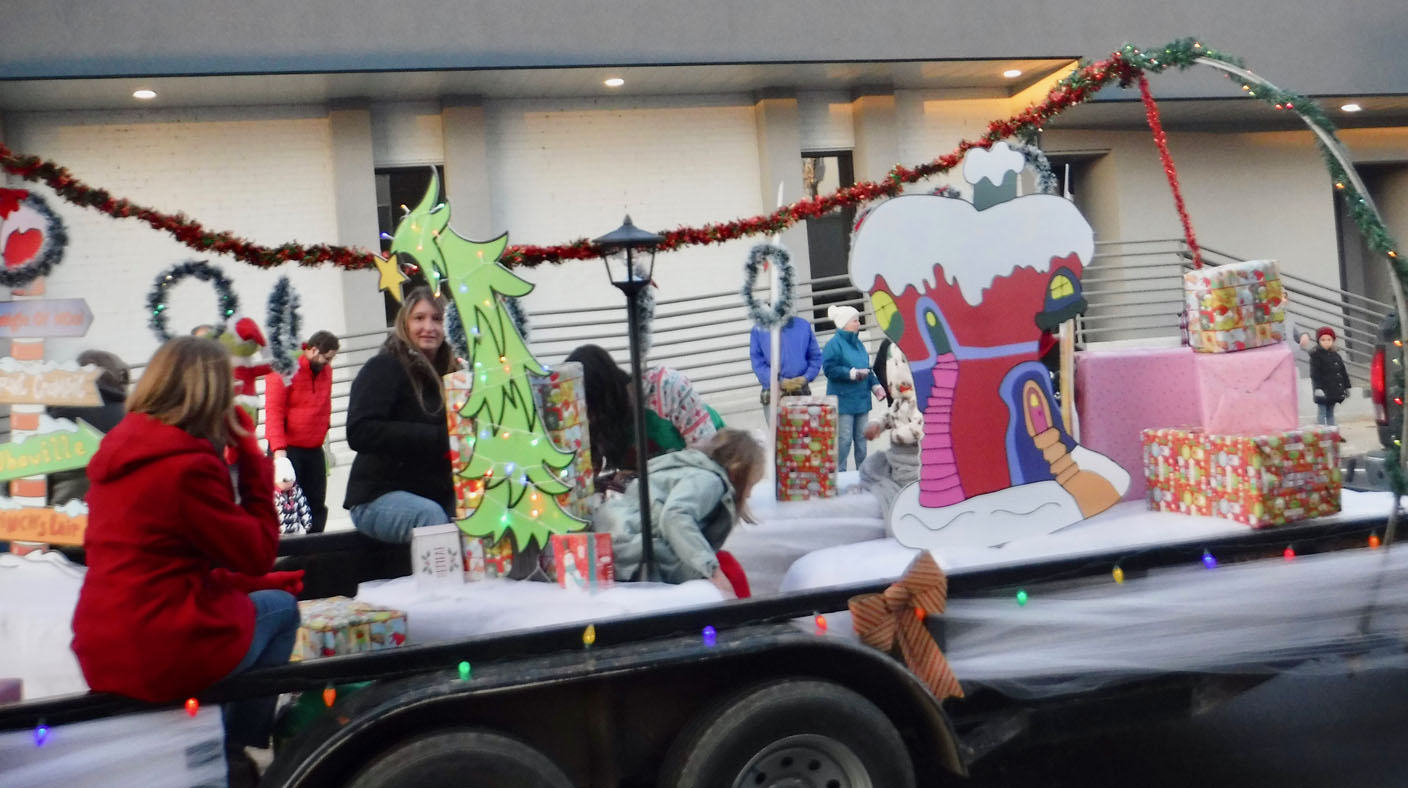 Westside Eagle Observer/SUSAN HOLLAND Representatives of Grand Savings Bank ride on their float amid gaily wrapped packages and features from Whoville, the village created by Dr. Suess in his book "How the Grinch Stole Christmas." Grand Savings Bank won the trophy for best overall float in the Gravette Christmas parade. 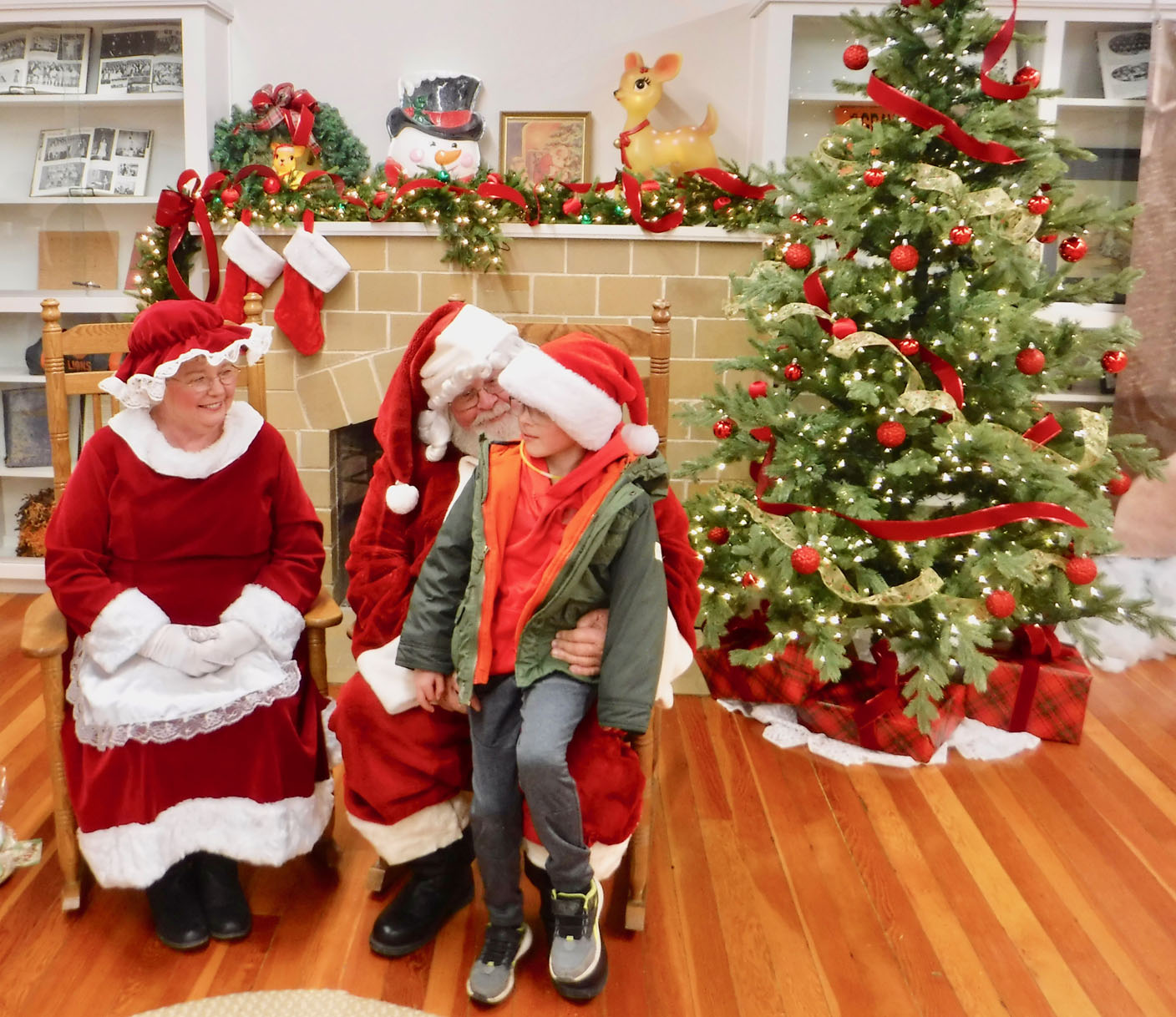