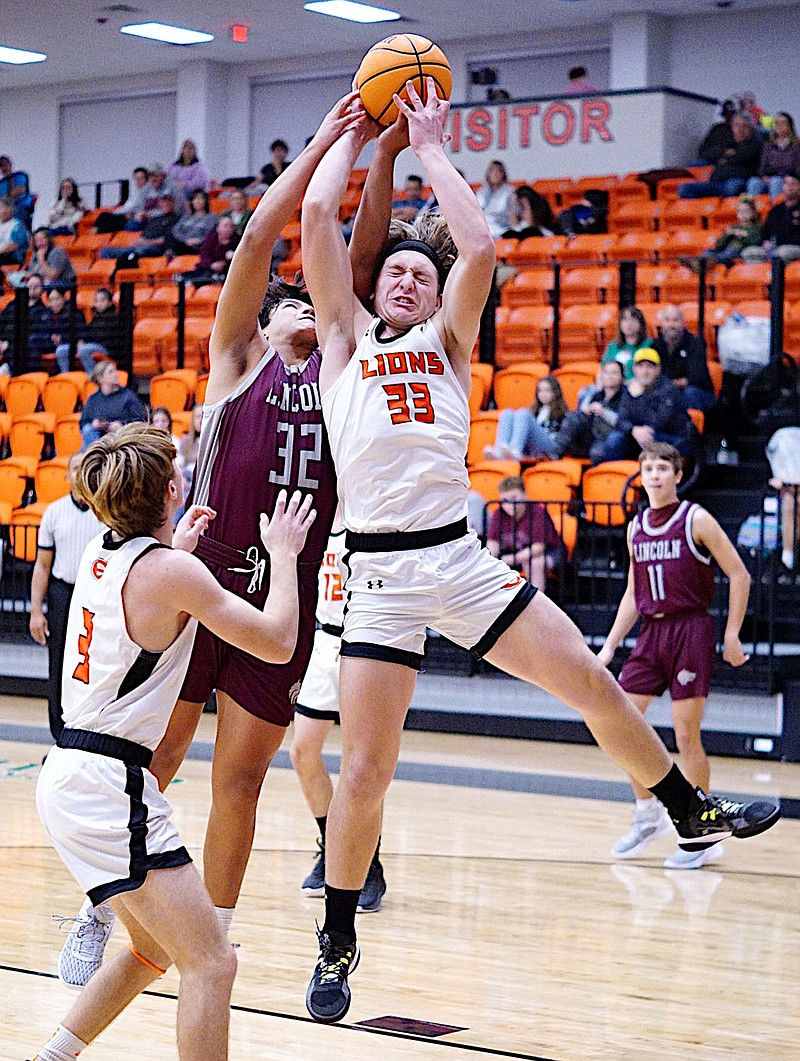 GRAVETTE -- In a game that took more twists and turns than a sidewinder seeking shade in the desert, Gravette pulled away from Lincoln, 68-63, in double overtime on Tuesday, Nov. 29.

Gunnar Woolard scored 24 points and Gravette finally finished off a pesky Lincoln squad that nearly stole the game at the end of the first overtime. The Lions executed when they had to and hit some big free throws in double overtime after nearly throwing the game away near the end of the first overtime. Gravette made 4-of-6 free throws and got a layup in the last minute of double overtime to hold off Lincoln, 68-63.

In the first overtime, Woolard stole a Lincoln pass and headed for the basket with the Wolves in hot pursuit. All he needed to do was either score or make two free throws with the Lions leading 54-51.

A technical foul was assessed against Woolard and Gravette because he turned around and made a gesture in the face of a Lincoln player, who stripped him of the ball on the way up, and that nearly set the Wolves up to steal a win on the road.

Lincoln junior Drew Moore sank both technical foul free throws, reducing Gravette's lead to 54-53 and on the change of possession to the Wolves, Lincoln in-bounded from the side with 15.9 seconds left. Kase Ingram caught a lob and got a shot up. Gravette was whistled for goal-tending and the basket counted, putting Lincoln ahead 55-54 with 4.9 seconds remaining in the first overtime.

Those successive two mistakes, the technical foul and goal-tending violation, in short order nearly sank the ship for the Lions. They only got bailed out because of the volume of fouls whistled against Lincoln. Kayden Job, who scored 20 points to lead Lincoln, fouled out on a charging call driving to the basket. That call hadn't been made all night, but suddenly manifested with 1:33 to play in the first overtime on the heels of another Lincoln scorer, Jace Birkes, fouling out.

The Wolves put Gravette's Will Betz at the foul line, shooting the double bonus when he was tripped after crossing half-court with six-tenths of a second showing. Will Betz sank his first free throw, but an official waved it off and sent him back to the line to shoot the double bonus.

The drama escalated as Will Betz misfired on his next free throw, leaving Lion fans on the edge of their seats, still trailing 55-54.

Will Betz coolly sank the last free throw. He made out 2 out of 3 but only got credit for one free throw. That was enough to tie the game and force a second overtime.

Lincoln sent Moore out into the jump circle and he won the tip to start the second overtime. Kellar Price controlled the ball for Lincoln and drove hard to the basket. He was fouled and had a chance to put the Wolves back into the lead, but missed both free throws.

At the other end, Gabe Holmes made 2 of 2 free throws, and suddenly the Wolves couldn't get any more calls on the road.

Kellar Price was called for charging while cutting to the hoop, and Gravette cashed in on the turnover. Kais Patton caught a lob from the left corner and scored a layup.

On its next possession, Lincoln crashed the offensive glass and got two second chances before the ball was tied up and the alternate possession belonged to Gravette. Woolard lost his man and cut to the basket where the Lions found him. He used a pump fake to bait a chasing defender, then laid the ball in.

Lincoln shot an airball, and the rebound went out-of-bounds to the Lions.

Gravette opened the game with Holden Betz and Will Betz hitting a pair of 3-pointers before Bryson Karber stroked a 3-ball for Lincoln. Isaiah Larson answered with the first of his two treys giving the Lions a 9-3 lead.

Lincoln rallied with a 9-3 run, fueled by two inside buckets by Kayden Job, another Karber trifecta and Job's putback to draw within 13-12 at the end of the first.

Birkes had four fouls called on him in the game's first 10:49. He made an aggressive drive, missed with contact, and appeared to track down his own rebound. However, that foul went against him, and so did another when he banged the ball-handler 42 seconds later.

Lincoln led briefly at the 6:18 mark of the second quarter on Paxton Price's putback, but the Lions broke away from a 23-22 edge with a 5-1 mini-run of their own, culminated by Jace Sandoval's drive to the hoop.

The Lions didn't score in the last minute and held a 28-23 halftime cushion.

Woolard had five points and Will Betz hit a 3-pointer as Gravette took its biggest lead of the contest at 36-25 with 5:21 left in the third quarter, but his step-back 3-pointer was the last basket of the period for the Lions.

Lincoln closed the gap with a 13-3 run. Job scored three times in the paint and added a pair of free throws. Moore hit a bucket and Karber drilled a three. Only one point separated the teams, heading into the fourth quarter.

Lincoln took a 44-40 lead on Job's drive to the bucket, but Gravette found its 3-point range in the nick of time.

Holden Betz hit back-to-back trifectas to even the score at 46-46. The Lions forged ahead when Woolard knocked down a triple, but poor shot selection down the stretch and a missed free-throw in a 1-and-1 situation left the door open. Birkes hit a clutch trey with 3.4 seconds left in regulation to tie the game at 49-49.

Gravette missed from half-court at the buzzer and the contest went into overtime. 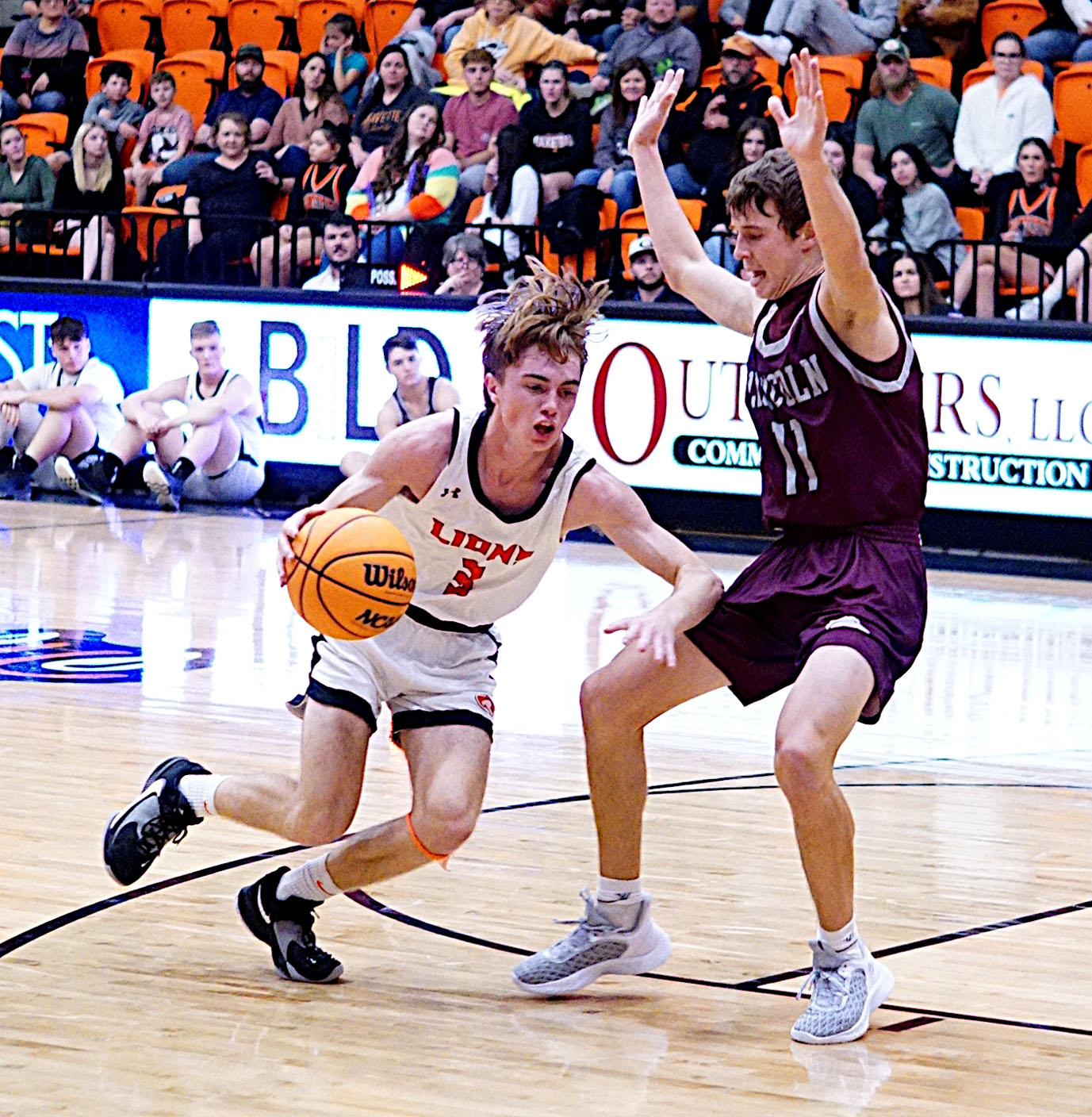 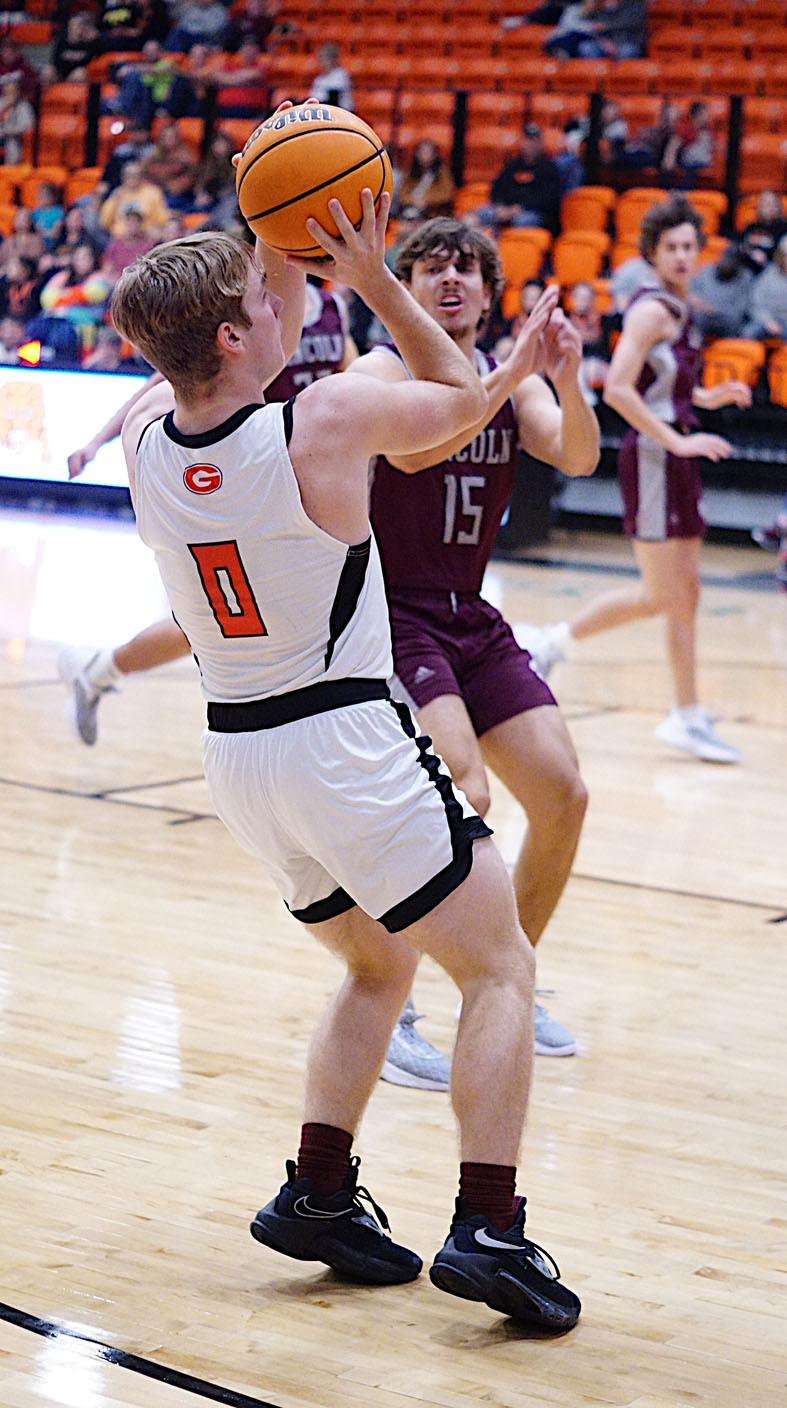 Westside Eagle Observer/RANDY MOLL Gravette's Kais Patton gets a hand on the ball to block a Lincoln shot during play at Gravette High School on Nov. 29.