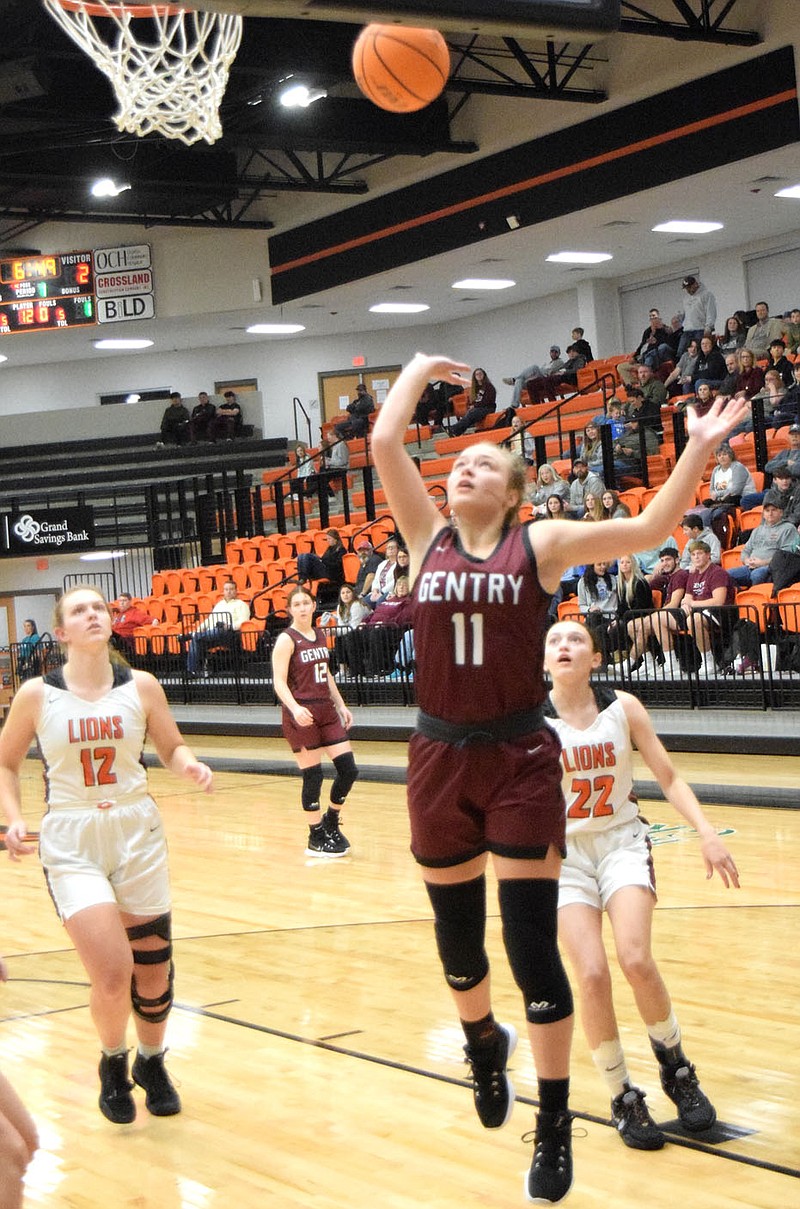 Westside Eagle Observer/MIKE ECKELS Lady Pioneer Kaitlyn Caswell (11) puts up the second of two field goals to kick off the Gravette-Gentry varsity girls basketball contest at the Lions' Den in Gravette Friday night. Caswell's was the Lady Pioneers second leading scorer with 14 which contributed to Gentry's 67-65 victory over Gravette.

Losing their formals and pumps after the homecoming coronation ceremony an hour earlier, the Lady Lions dressed out in their basketball uniforms and shoes, ready to play the Lady Pioneers.

After the tip-off, Gravette gained control of the ball for the first possession of the night. But the Lady Lions failed to capitalize on this first opportunity, turning the ball over to Gentry. Kaitlyn Caswell put the ball up and into the basket for the first two points of the contest. On the next Gravette possession, Rachel Deihl was fouled, sending her to the free-throw line for two attempts. Deihl missed the first attempt but hit the second, giving the Lady Lions their first point of the night.

A few seconds later, Caswell took the ball in for another layup and the Lady Pioneers held a 4-1 lead over the Lady Lions. From this point in the contest, the lead went back and forth until, with only 20 seconds left in the first quarter, the Lady Lions gained control of the ball. And, 13 seconds later, Gravette hit a field goal to tie the quarter at 18 all.

Gravette managed to control the second quarter, outscoring Gentry by six points to take a 37-31 lead into the locker room at the break.

The Lady Pioneers picked up the tempo in the third quarter, holding Gravette to only three field goals, which enabled Gentry to take over and hold the lead going into the final quarter of play.

Lions back the lead by a mere point. The Lady Pioneers drove the ball down and hit the basket for a one-point lead. But the shooter was fouled, sending her to the line for a free throw, which she made, resulting in the Lady Pioneers taking the conference win, 67-65, over the Lady Lions.

Three Lady Lions were in double figures for this contest, including Reese Hamilton, who hit six three-point shots in the first half, for a total of 22 points. Brynn Romine hit three three-point field goals and had a total of 11, followed by Alexa Parker, who also had 11 points. Other Gravette players contributing to the Lady Lion scoring effort included DaLacie Wishon with six, Rachel Deihl and Keeley Elsea each with five, and Alyssa Holland with three.

Gentry had four players in double figures, including Alyssa McCarty with 21, Kaitlyn Casewell with 14, Brynn Cordeiro with 11, and Emma Tevebaugh with 10. Two other Gentry players landed points for the night, including Shelby Still with seven and Destiny Reinhardt with four. 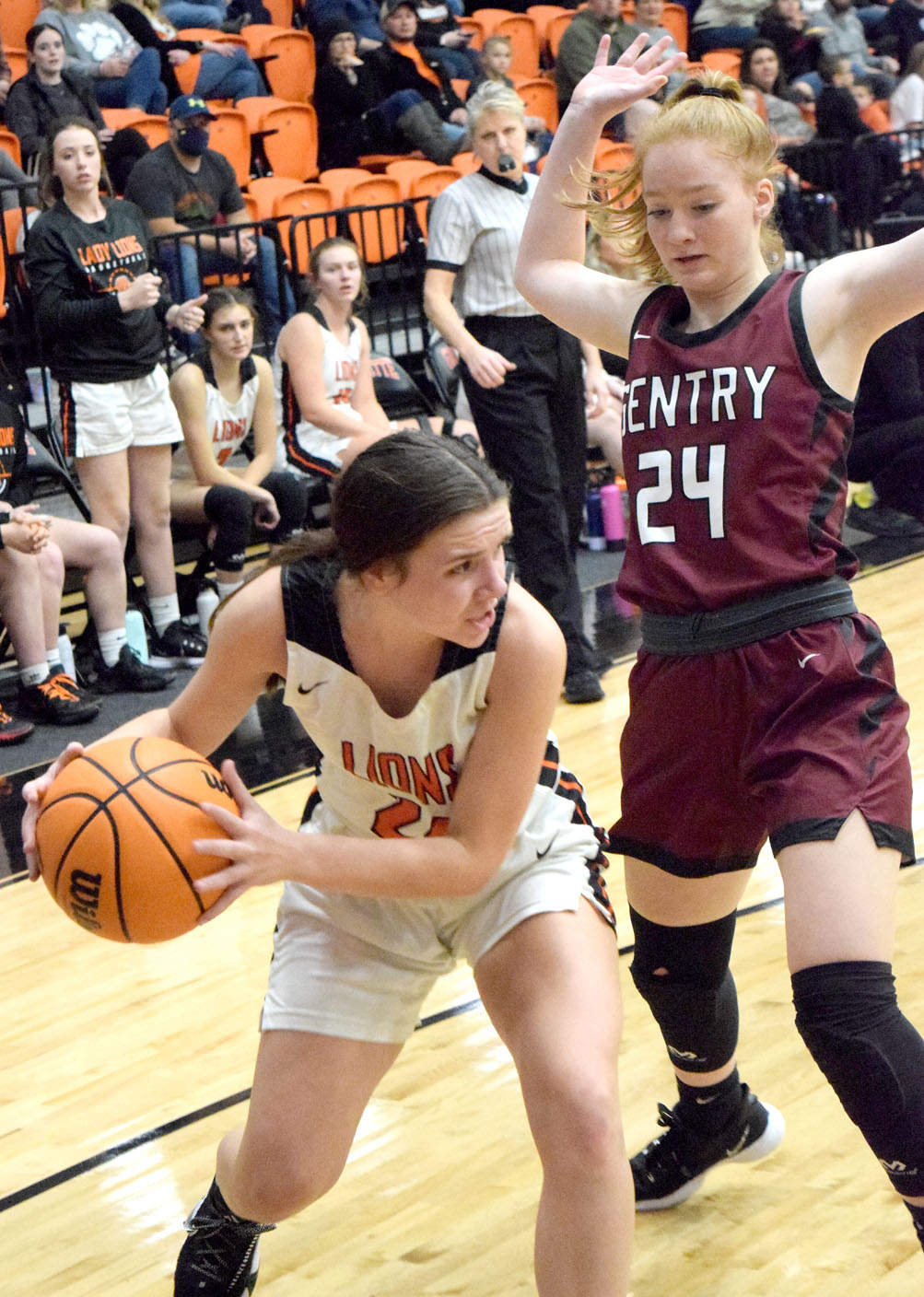 Westside Eagle Observer/MIKE ECKELS Lady Lion Reese Hamilton (24 left) starts to drive around Destiny Reinhardt (Gentry 24) on her way to the basket during the closing minute of the Gravette Homecoming contest against Gentry Friday night. The Lady Pioneers just edged out the Lady Lions 67-65. 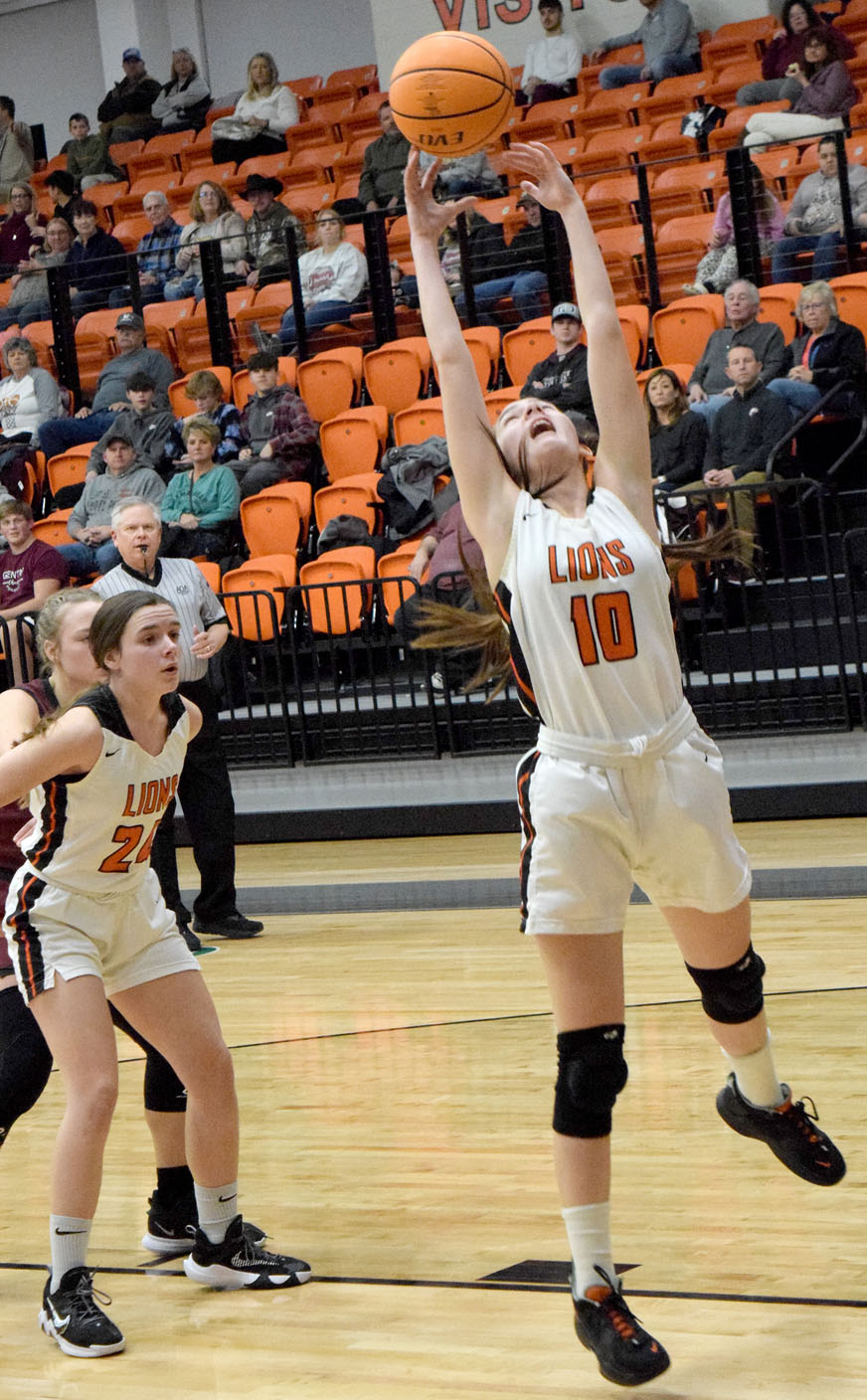 Westside Eagle Observer/MIKE ECKELS As Reese Hamilton (24 left) blocks off a Lady Pioneer player, Alexa Parker (10) tries to pull down a rebound during the first quarter of the Gravette-Gentry basketball contest at the Lions' Den in Gravette Friday night. Parker was one of three Lady Lion players in double figures with 11 points.