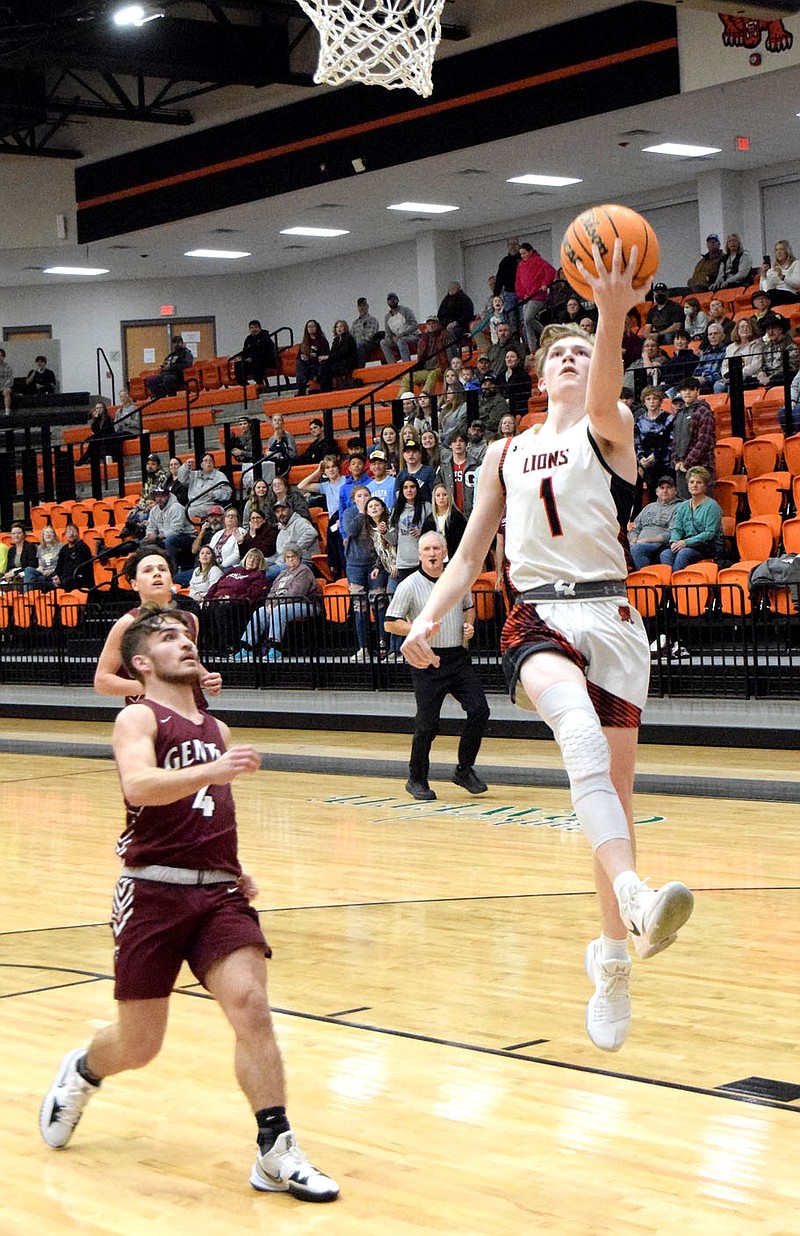 Westside Eagle Observer/MIKE ECKELS Brady Hunt (1) goes for a layup during the fourth quarter of the Gravette-Gentry basketball contest at the Lions' Den in Gravette Friday night. The Lions' fourth quarter scoring drive aided in the 60-52 defeat of the Pioneers in the Gravette Homecoming contest.

GRAVETTE -- Lion fans filled the home side of the Lions' Den in Gravette Friday night as the hometown Lions played host to their Highway 59 rival, the Gentry Pioneers, in the 2022 Gravette homecoming contest. And Lion fans would not be disappointed as Gravette took the win by eight points.

For the first 90 seconds of the first quarter, both teams' defenses were riding high, keeping the contest scoreless until Gentry's Hayden Henry hit a three-point shot for the first points of the contest and the Pioneers' first lead. Three Gravette possessions later, Brady Hunt was fouled, sending him to the free-throw line for two. Hunt hit both free throws and Gravette was on the scoreboard for the first time. Soon after, Brayden Feathers put up a three and now the Pioneers were up by four. As the quarter came to a close, both teams were in single digits, with the Pioneers leading the Lions, 9-4.

The game intensified in the second quarter as the Lions kicked their game plan into high gear, holding the Pioneers to single digits while overtaking the Pioneers' first-quarter lead. And, at the halftime break, Gravette held a 20-17 lead over Gentry.

The crowds on both sides of the Lions' Den came alive in the fourth quarter. Gravette jumped out in front by 10 points halfway through the quarter. But Gentry was far from done and began to whittle down the Lion lead. With a minute left on the clock, Gentry closed the gap to six. But that is as close as the Pioneers were able to come. The Gravette Lions took the homecoming basketball contest, 60-52, over Gentry.

Two Lions were in double figures for the contest. Michael Duke had 17 and Brady Hunt 14. Other Gravette players contributing to the scoring effort included Gunner Woolard with nine, Dakota Sizemore with seven, Gabe Edgmon with four, Braxton Muldoon with three, Will Betz, Brooke West and Sandeep Dhillon, each with two.

On the Gentry side, Brayden Feathers led the way with 15, including four three-pointers, followed by Addison Taylor with 12, including three three-pointers. Rounding out the Gentry scoring effort were Bart Walker with nine, Jonathan Corter with eight, Garrison Jackson with four, Hayden Henry with three, Riggs Harper with two, and Hayzen Phillips with one.

Westside Eagle Observer/MIKE ECKELS Lion Gabe Edgmon (right) tries to put up shot but Pioneer Bart Walker manages to get his hand on the top of the ball blocking Edgmon's shot during the Gravette-Gentry basketball game in Gravette Friday night. Walker managed to knock the ball out of Edgmon's hand and recovered by a Pioneer teammate. 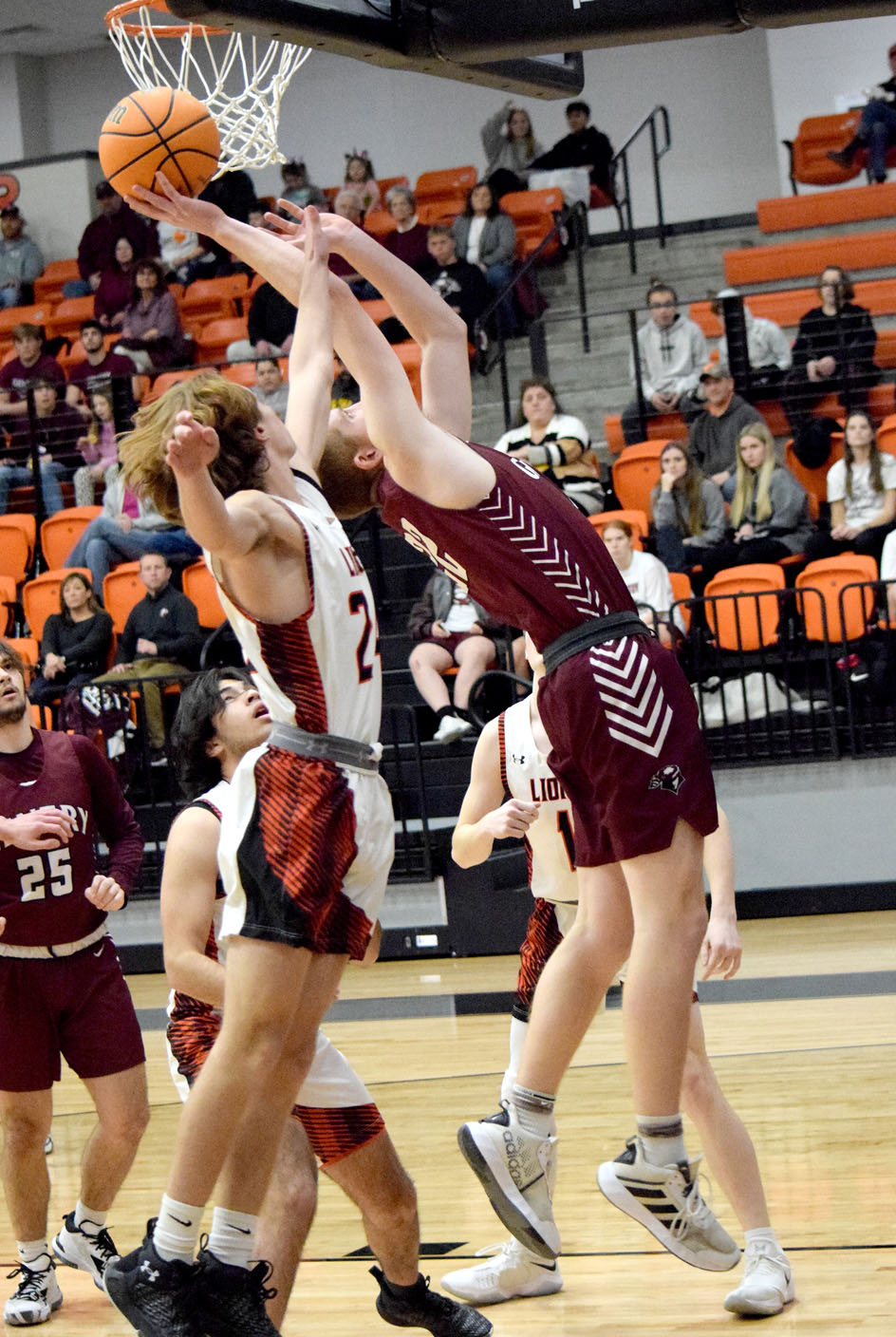 Westside Eagle Observer/MIKE ECKELS As Bart Walker (right) arches backward to get the ball over the rim, Lion Gunner Woolard goes for the block during the Gravette-Gentry varsity boys contest at the Lions' Den in Gravette Friday night. The Lions claimed the Homecoming victory 60-52 over the Pioneers for the conference win. 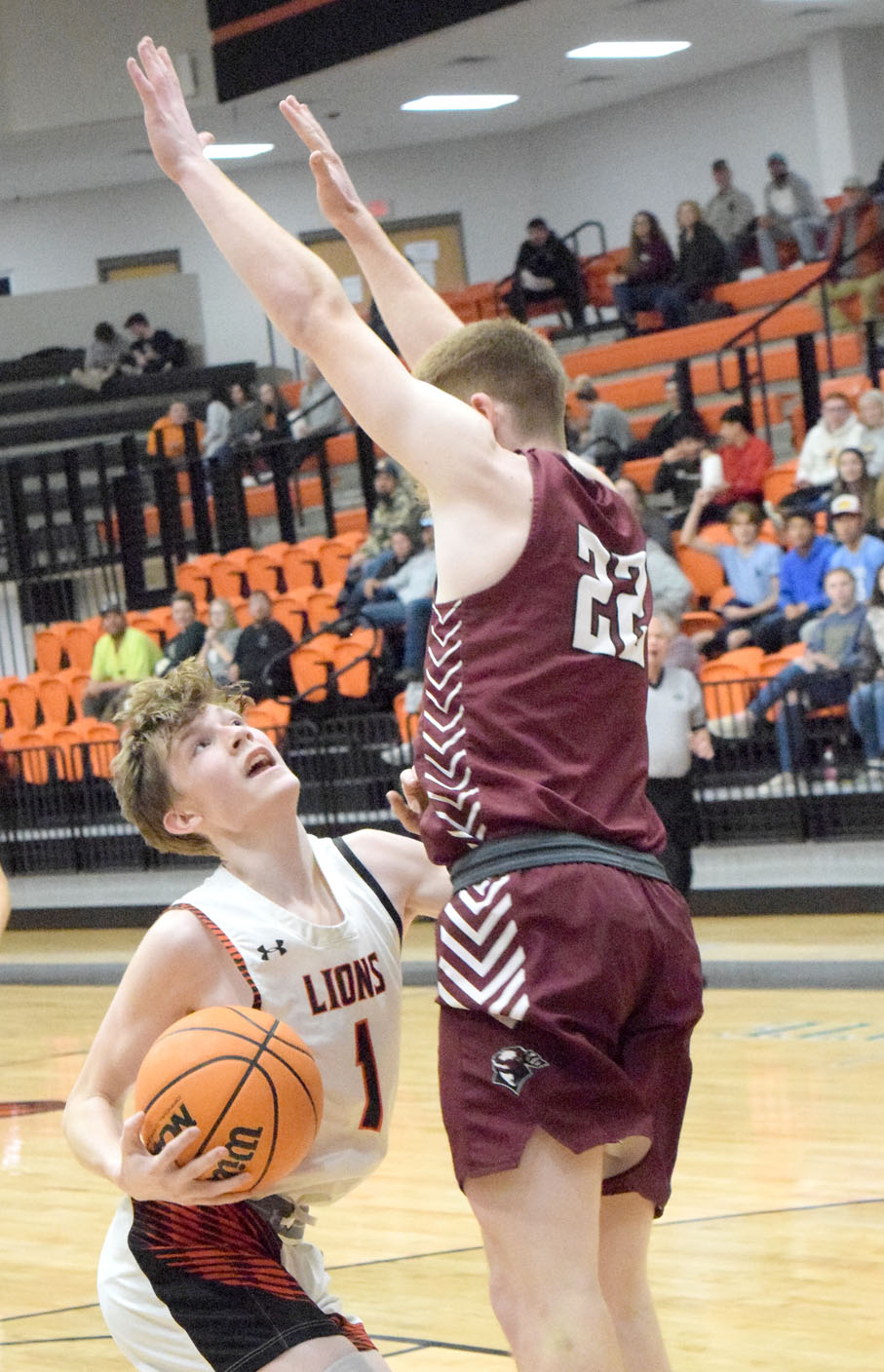 Westside Eagle Observer/MIKE ECKELS Facing a wall, Lion Brady Hunt looks for a way to get the ball up and over Pioneer Bart Walker during the third quarter of the Gravette-Gentry conference showdown in Gravette Friday night. Hunt was one of two Lion players in double figures with 14 points.