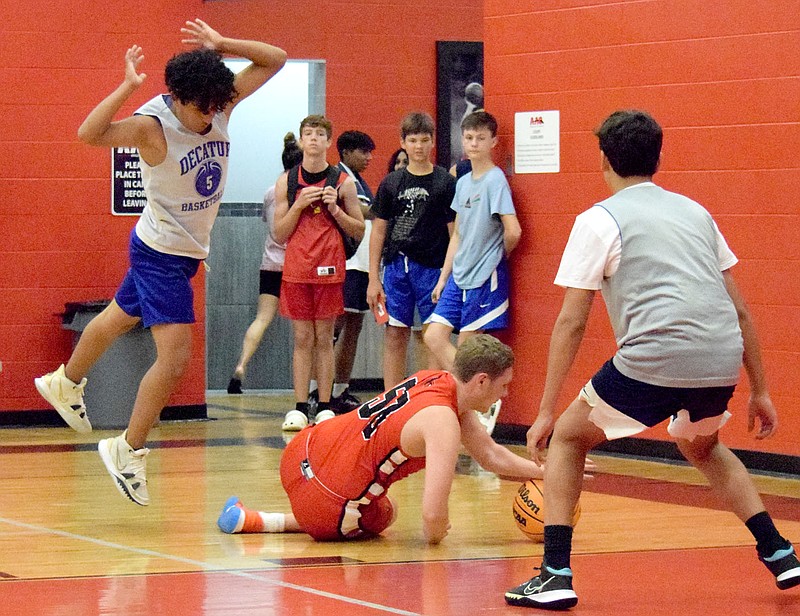 Westside Eagle Observer/MIKE ECKELS Brandon Cruz jumps up over a fallen Cardinal player to keep from tripping during the Decatur-Farmington A summer basketball camp contest in Fayetteville on July 20. The basketball event was hosted by the Tontitown-based Ozark Catholic Academy basketball program.

FAYETTEVILLE -- After the Decatur Lady Bulldog junior high girls basketball team had a remarkable 28-2 run this summer, it was finally time for the boys to prove they are ready for basketball this fall.

The Bulldogs, under new head coach Austin Froderking, traveled south to the gyms at Arkansas Athletes Outreach in Fayetteville on July 18 and 20 for the Tontitown-based Ozark Catholic Academy's (OCA) summer basketball camp.

Junior high teams from Fayetteville, Springdale, Rogers, Bentonville, Farmington and Greenland joined the Bulldogs in the two-day camp. Ozark Catholic's head basketball coach Cody Vaught and his staff organized the event, including setting the team pairing for each day. The games consist of two 14-minutes halves (12 minutes for the younger teams) with a one-minute break between each. Each foul utilized the two points for the one-shot rule.

Up first for the junior high Bulldogs was the host team Ozark Catholic Griffins. The Griffins lept out in front of the Bulldogs and by the end of the 14-minute first half, held a 20-7 lead going into the short break.

The Bulldogs took the court ready to make a comeback. Although the team played very aggressively, the Griffins continued to hold the upper hand as they took the 34-14 win over Decatur.

In the last contest of the morning session, the Bulldogs squared off against the Farmington junior high A team. In this contest, the Cardinals took the court expecting an easy win. But Decatur had other ideas as the team kicked its offensive game plan into overdrive and, by the end of the first half, led Farmington.

The lead slipped back and forth between the Cardinals and the Bulldogs until the last two minutes when Decatur pulled ahead by six. Suddenly, the Bulldogs found its lead dwindling to two with 30 seconds left. The Farmington Cardinals hit a trio of field goals to take the game, 29-25.

In the final game of the camp for Decatur, the boys took on the Cardinal B team. The Decatur Bulldogs walked away with a resounding win, 37-12.

The Decatur Bulldog junior high boys did well for their first outing with Froderking at the helm. The team won three and lost three,. The game plan developed by Froderking reflects the hard-hitting, fast-paced style that fans can expect when the 2022-23 basketball season starts in November. 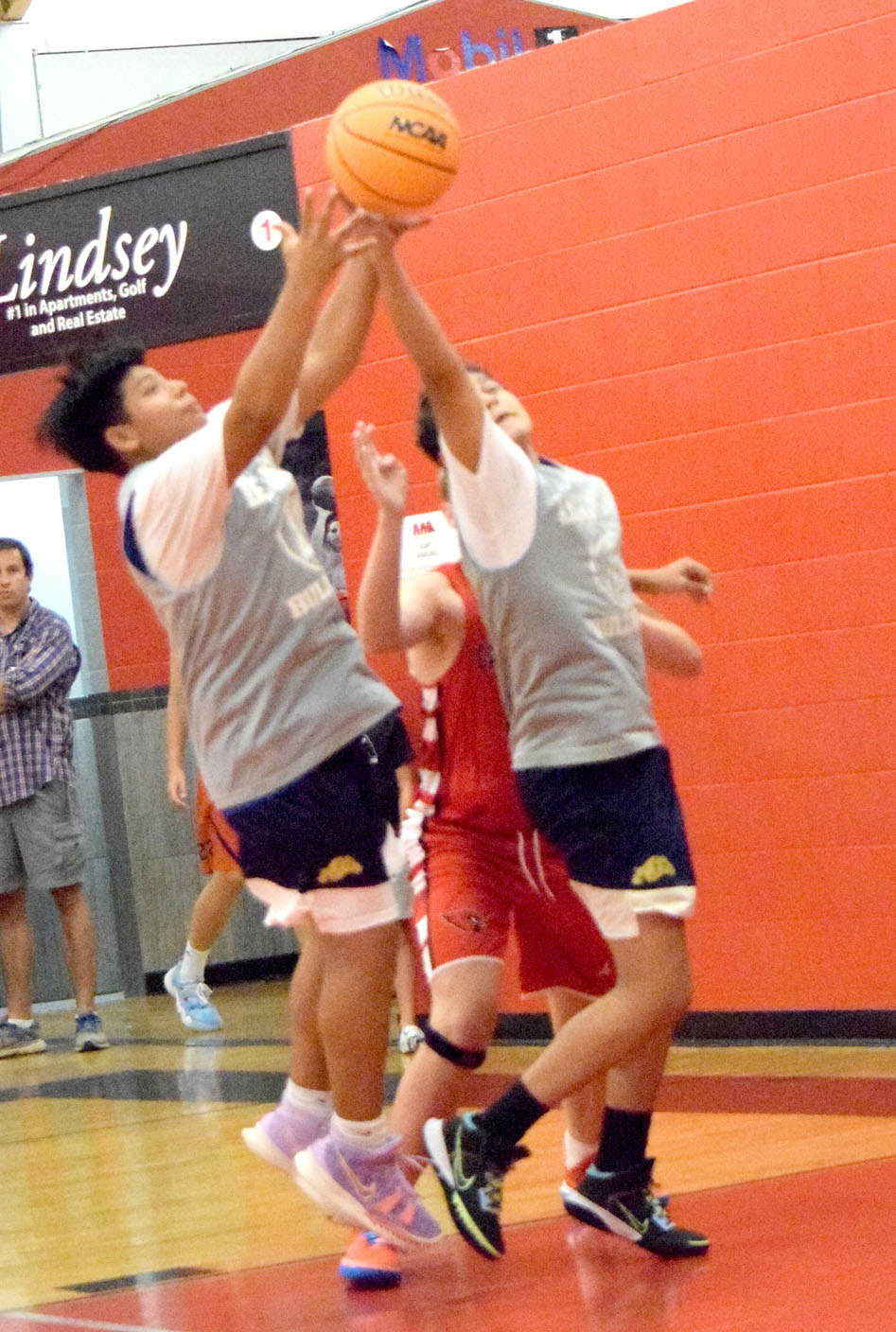 Westside Eagle Observer/MIKE ECKELS Bulldog Allen Medel (left) and Giovanni Puga (right) fight for control of a Cardinal rebound during the first half of the Decatur-Farmington A junior high basketball contest in Fayetteville on July 20. Medel gained control of the ball, taking it down the court and setting up a series of plays that eventually landed the Bulldogs a field goal. 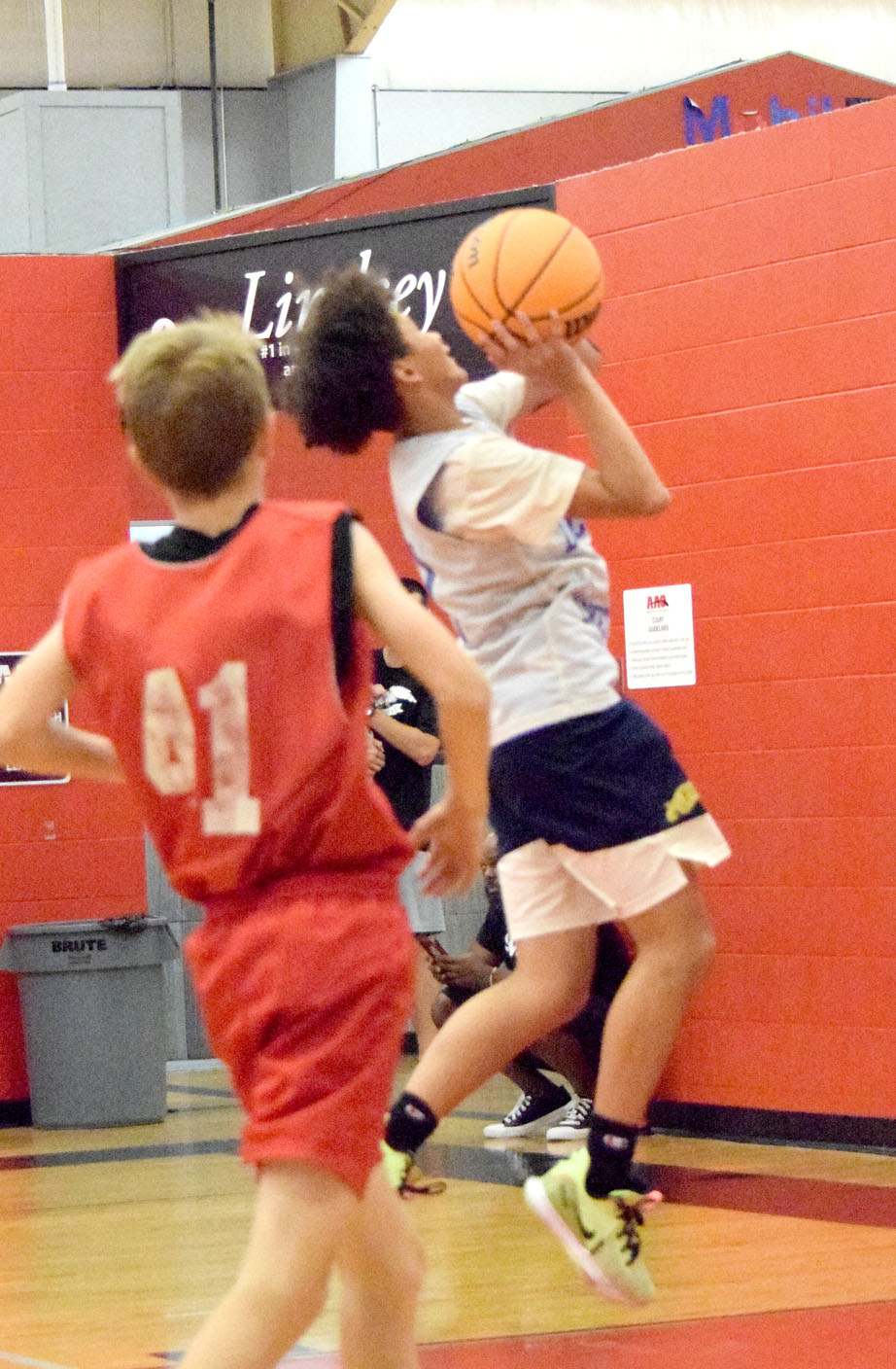 Westside Eagle Observer/MIKE ECKELS Bulldog Ricky Thor goes for a layup during the first half of the Decatur-Farmington A junior high basketball contest which was part of the Ozark Catholic Academy summer basketball camp at the Arkansas Athletes Outreach gym in Fayetteville July 20. 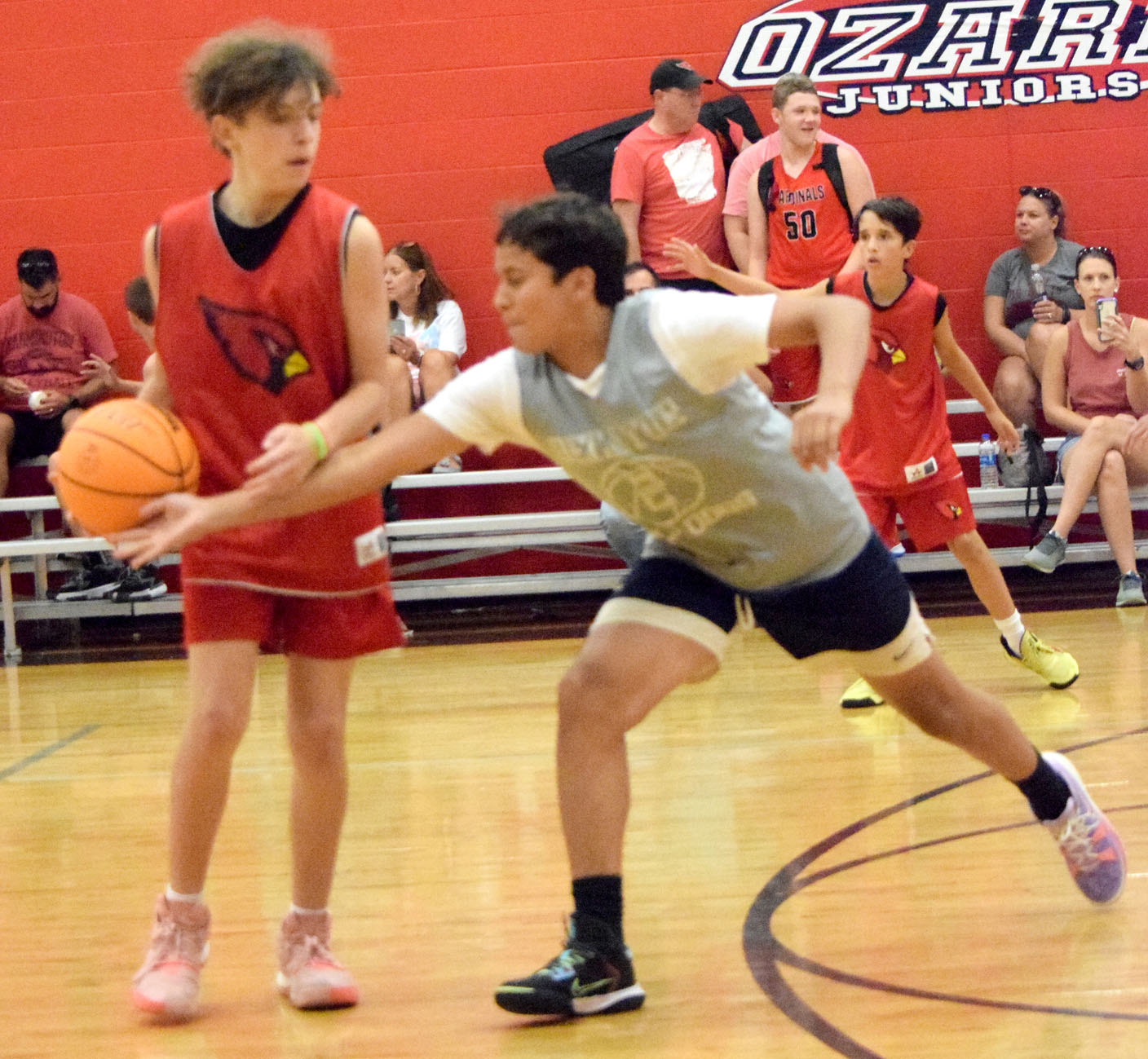 Westside Eagle Observer/MIKE ECKELS Bulldog Giovanni Puga (right) tries to steal the ball away from a Cardinal player during the July 20 Decatur-Farmington A junior high basketball camp at the Arkansas Athletes Outreach gym in Fayetteville. The Bulldogs took the win over the Cardinals to complete a three-game sweep for the day's events.