Black bear sighted in rural Gentry by residents of area 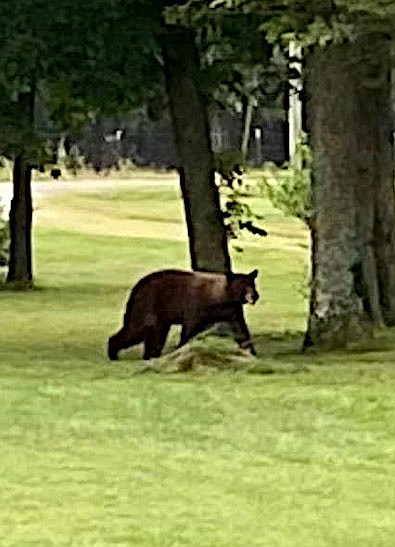 SUBMITTED A black bear crosses a yard near Gentry.

At first, it was Christian James who saw the bear. The two boys and their father were on their way to pick up two other students for football practice that day.

Initially, it caught them by surprise.

The bear ran away after being startled by the James family's oncoming vehicle, where it "plowed through" the neighbors' fences and then disappeared into the woods.

With his phone handy, Christian James filmed the bear. The video captures the bear as it raced across the road and into the woods (https://you­tube.com/shorts/bjAgp­Q54wBA?feature=share).

A nearby neighbor, who asked that her name be withheld, also saw the bear on another day and took pictures of the bear crossing her yard.

According to the "Get Bear Smart Society," common traits in all black bears are a "straight face" profile; "tall pointed" ears, and no shoulder "hump" such as is commonly found in brown bears. In Christian James' video and the neighbor's pictures, this black bear has a distinct light shade of fur above its shoulders.

As of now, no one knows the reason for the bear's appearance and bear sightings aren't normal in that part of the county.

Alesia James, Chris James' wife, says it was the first time she had ever seen a bear in the neighborhood.

"My mom and dad own this property that we live in. And I've lived here for 30 years and have never seen a bear out here before ... To see a bear around out here is pretty crazy."

Many wonder what caused the bear to appear. Some have theories but they are inconclusive due to a lack of evidence.

The James family assumes that the bear could just be taking advantage of the natural resources in the area.

"We've got a big 5-acre pond ... on the back of our little house," said Chris James. "We think he'd been coming back here and getting fish out of the pond."

The James family says a couple of days before the sighting, they heard "crunching noises" from the woods. And their dogs were "acting crazy for two days," but they dismissed the signs until they saw the bear.

"To be honest, I was kinda happy to see it," Chris James said when asked about his thoughts about a bear living around his family's property. "I hope they don't mess with it," he added.

But not everyone in the family shares the same point of view.

"It's kinda scary," said Christian James. "It's cool but it could not be good."

The James family agrees that, if the bear presents a danger to the community or the livestock in the area, it needs to be handled by the local authorities. The James family has alerted the police about the bears' presence.

The Arkansas Game and Fish Commission website lists Benton County and Washington County in the "Zone 1" category for bear hunting.

Zone 1 bear hunting season begins Sept. 17 and runs through Nov. 30 for archery and from Nov. 12 to Nov. 30 for modern guns. Illegally hunting bears can bring high fines, jail time, and license suspensions. Additional information is available on the AGFC website.

The National Park Service recommends the following if you encounter a black bear: If the bear is stationary, "Move away slowly and sideways." If the bear follows you, "Do not run; stop and hold your ground." If the bear attacks, "Do not play dead. Try to escape to a secure place such as a car or building. If escape is not possible, try to ﬁght back using any object available." 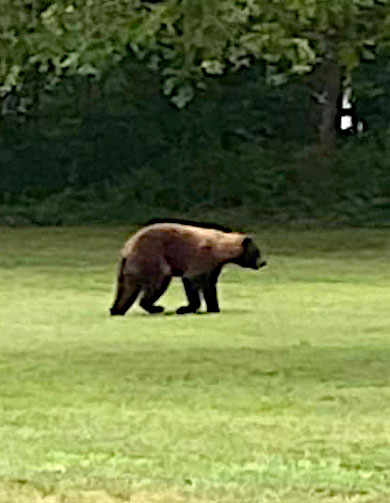 SUBMITTED A black bear crosses a yard near Gentry.