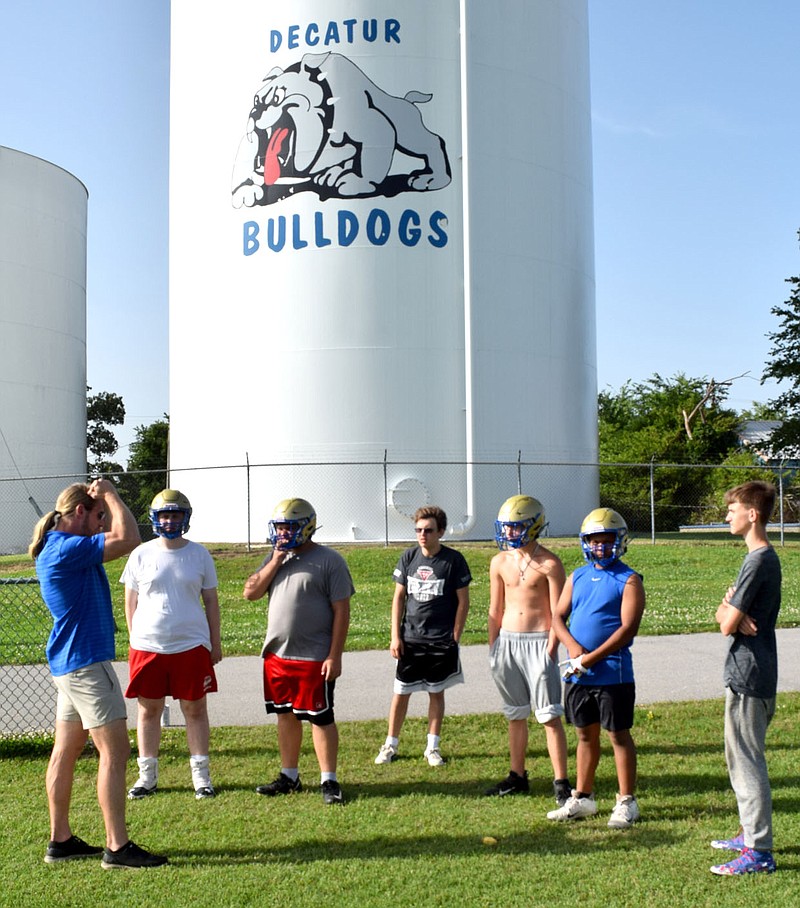 Westside Eagle Observer/MIKE ECKELS With the Decatur Bulldog water tower serving as a backdrop, football coach Jake Denzer (left) talks to a small group of junior and senior high football players about the upcoming football camp in Berryville. Both Bulldog teams had a light off-season practice session at Bulldog Stadium in Decatur June 14.

DECATUR -- With the move back to 11-man football and the 2022 season fast approaching, head football coach Jake Denzer was itching to get both his junior and senior high school squads on the gridiron for a little football refresher course.

The Bulldogs hit the practice field on June 14 for a light two-hour late evening workout. The only gear the team was allowed to wear for the workout was its helmets. But this was a special workout for the two young teams. This was the chance to size up and get used to wearing these brand-new helmets.

Over the last few years, the Bulldogs were using old headgear. So, at the end of the 2021 season, as Jake Denzer and his staff were packing the helmets to be sent out for reconditioning, they found many of the headgear devices defective, rendering most unusable. Fortunately for the football program, athletic director Jacque Smith's request for new helmets was approved by the school board and, within eight weeks after the order was placed, the Bulldogs had a completely new set of headgear.

A new problem arose for Denzer, what to do with the old helmets. He came up with a brilliant solution. Give the old helmets to local businesses, sponsors and alumni as a way to thank them for their continued support of the Bulldog football program.

Eventually, 10 junior and senior high school players showed up for the practice session which consisted of fundamental running and catching drills for the offense and off-the-line drills for defense. Because of the off-season, no tackling or hard contact was allowed during these sessions per rules laid out by the Arkansas Activities Association.

Denzer currently has a staff of assistant coach Donald Thomas, volunteer coach Waylon Harrington and a volunteer coach who handles setups and managed equipment for the teams.

On Thursday morning, Denzer took his players to team camp in Berryville. For some of the senior high players, it was a chance to reunite with former Bulldog football coach Grant Hudson who is serving as an assistant coach for the Berryville Bobcats with his father Brian Hudson who also coached at Decatur in 1998-1999. Hudson ran the football program in Decatur in 2019-2020.

Currently, both teams are still engaged in off-season light practice sessions not exceeding two hours on Tuesdays and Thursdays from 5:30 to 7:30 p.m. Preseason practice begins August 2.

The first contest of the season for the junior high team is a benefit game scheduled for Aug. 25 with Gentry at Bulldog Stadium in Decatur.

The first Decatur Bulldog varsity game is also a benefit contest with Episcopal on Aug. 26, beginning at 7 p.m. at Bulldog Stadium in Decatur. 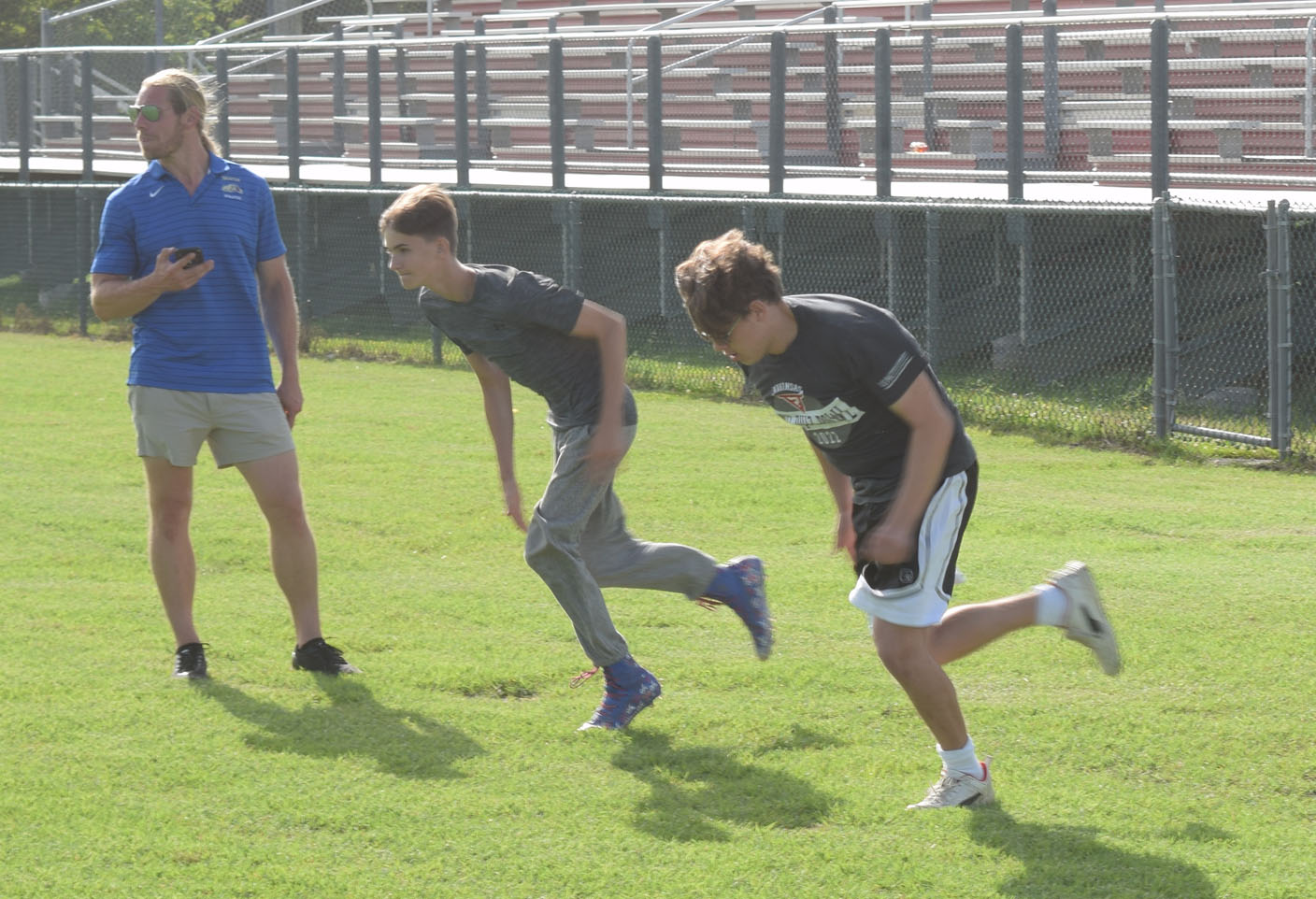 Westside Eagle Observer/MIKE ECKELS Jake Denzer (left) watches some of his players execute one of his drills downfield as a new group begins its drill during the Decatur Bulldog junior and senior high school football teams' off-season practice session at Bulldog Stadium on June 14. The Bulldogs will continue their light drills until Aug. 2 when the preseason practices begin.

Westside Eagle Observer/MIKE ECKELS Yefferson Cardona (left) catches a high throw from coach Jake Denzer during the June 14 junior and senior high off-season football workout on the practice field behind Bulldog Stadium in Decatur. Both Bulldog teams were engaged in non-contact drills until the start of the pre-season practice sessions on Aug. 2.