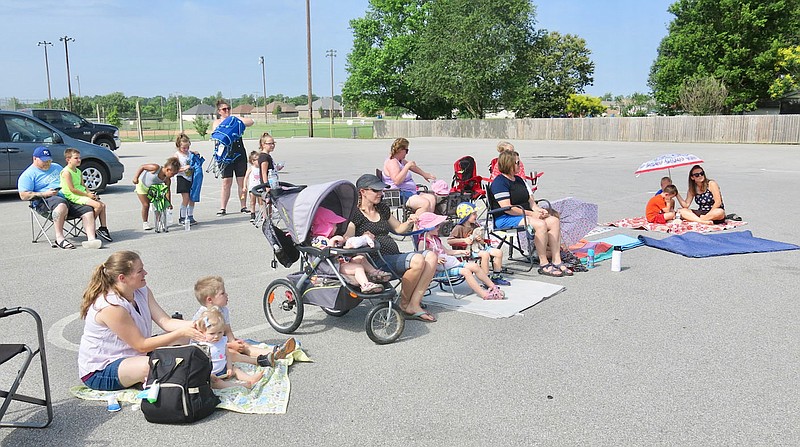 Westside Eagle Observer/SUSAN HOLLAND Several parents spread blankets and quilts in the parking lot of Pop Allum Park Thursday morning, June 16, as they and their children prepared to watch the Trike Theatre production of "Mariposa Butterfly." The bilingual play, sponsored by the Gravette Public Library, focused on the differences between two neighbors and how the life cycle of a mariposa butterfly which visits both their gardens brings them together.

GRAVETTE -- The Gravette Public Library hosted a Trike Theatre performance of "Mariposa Butterfly" at 10 a.m. Thursday, June 16, at Pop Allum Park. Several parents and youngsters braved the morning heat to come out and enjoy the production.

Trike Theatre actors Justin Mackey and Kylie Groom Stacy welcomed the group and talked to the youngsters about acting. He told them that an actor uses several things to put on a play. He uses his body, his voice, his imagination, concentration and cooperation from his audience, Mackey said. Then he and Stacy led the audience in a series of exercises to limber them up and prepare them for the play.

Mackey, as the Mariposa Butterfly, Stacy and Ana Miranor Miramontes as neighbors 1 and 2, enacted the 50-minute performance. The bilingual play told the story of two neighbors living side by side in Texas who speak different languages and have different interests.

When the play begins, the two neighbors have a number of disagreements, clashing even over predicting the weather. However, the mariposa butterfly that pollinates both their gardens brings them together and they are shaking hands and exchange gifts when the performance concludes. The story provided a good lesson in the importance of tolerance and kindness for both children and adults.

The "Mariposa Butterfly" is being presented through a grant from the Walmart Foundation. The Gravette production was one of 18 performances the Trike Theatre will present this summer. 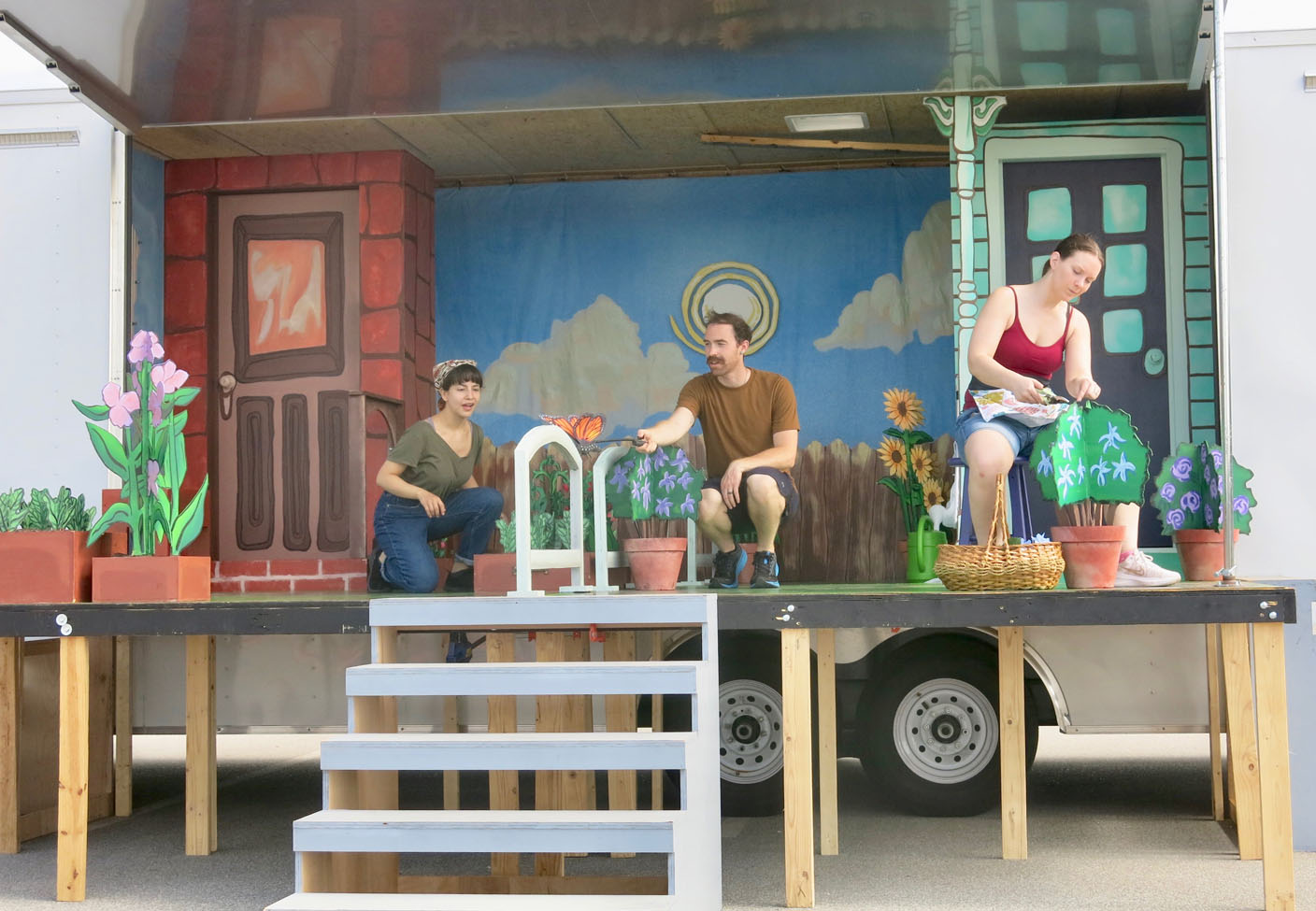 Westside Eagle Observer/SUSAN HOLLAND Actors Ana Miranor Miramontes (neighbor no. 2). Justin Mackey (the mariposa butterfly) and Kylie Groom Stacey (neighbor no. 1) act out a scene in the blingual play "Mariposa Butterfly" Tuesday morning, June 14, at Pop Allum Park. While neighbor no. 2 is entranced with the activity of the butterfly pollinating her plants, neighbor no. 1 is occupied with trimming one of her flowers. The play was hosted by the Gravette Public Library and is one of the many activities it provides for its patrons. 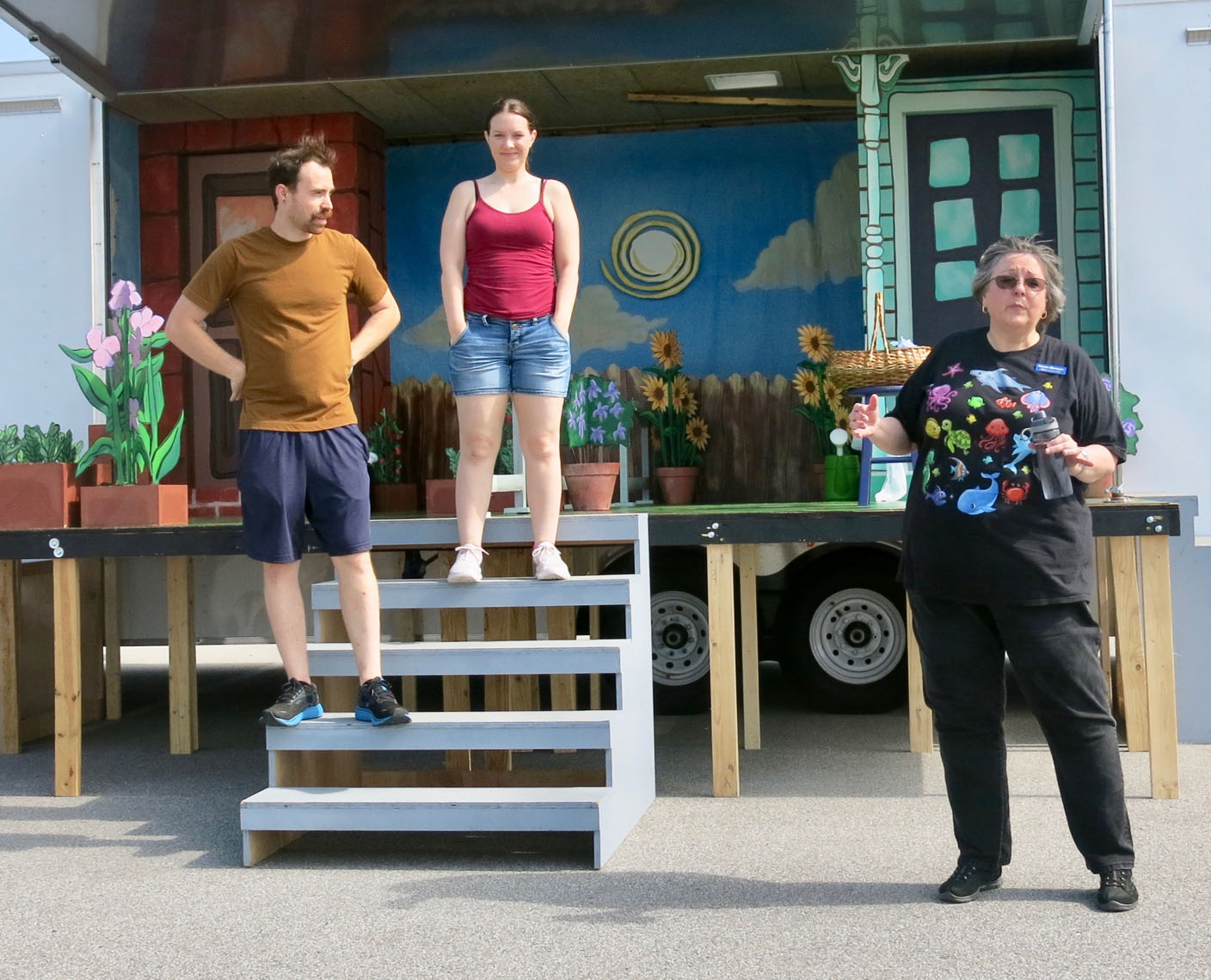 Westside Eagle Observer/SUSAN HOLLAND Karen Benson, (right), director of the Gravette Public Library, welcomes guests to the Trike Theatre production of "Mariposa Butterfly," Thursday morning, June 16, at Pop Allum Park while actors Justin Mackey and Kylie Groom Stacy wait to begin the performance. The library hosted the bilingual play, one of many activities it provides for the public. Benson was inviting parents to come in and sign up their children for the library's summer reading program. Registration is ongoing at the library or online.