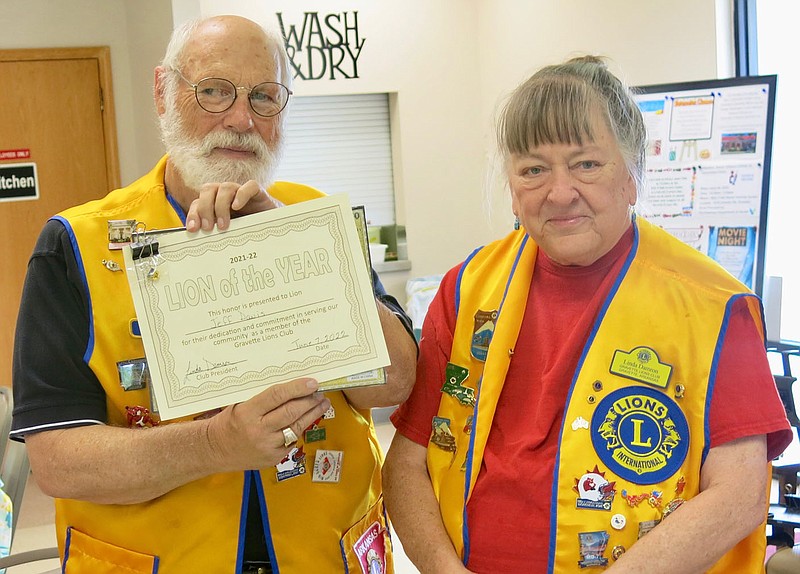 Westside Eagle Observer/SUSAN HOLLAND Jeff Davis displays the certificate and pin he received honoring him as 2021-2022 Lion of the Year for his "dedication and commitment in serving our community as a member of the Gravette Lions Club." Davis poses with club president Linda Damron, who presented him the award. Davis, who has been serving as club treasurer, was installed as 2022-2023 president at the meeting.

GRAVETTE -- Members of the Gravette Lions Club celebrated their ninth year at their regular meeting Tuesday, June 7, at the Billy V. Hall Senior Activity Center. Highlights of the meeting were a talk by district governor-elect Dean Rowland, the installation of new officers, and the presentation of awards. Ice cream and cake were served at the close of the meeting.

Rowland, from Ozark, and a member of the Elkins Lions Club, spoke to the group about one of his passions, shark fishing. Just as a fisherman perfects his technique over several fishing trips and prepares for a trip by gathering the proper tackle and bait, a Lion should be prepared to recruit new members with Lions Club brochures, membership applications and a practiced presentation.

Rowland commended the Gravette club for having members who go a step above, who are willing to do more than is required for their club. He encouraged them to keep recruiting, saying any club needs members to accomplish their projects, and reminded them to "have fun along the way."

Rowland said he is looking forward to going to Montreal on June 22 for his inauguration, where 700 countries will be represented. He said Gravette needed to form a Leo Club (for young members). "Since the Gravette mascot is a lion, you already have young Leos in the schools," he said.

Outgoing president Linda Damron presented certificates of appreciation to Susan Holland for her newspaper coverage of Lion events and to Lanny Garrett for his help with cemetery cleanup and the foosball court project. Then she presented a certificate and pin to Jeff Davis, honoring him as the club's Lion of the Year.

Sue Rice opened the meeting with a quiz asking about the three states with only three letters and the four states which are commonwealths. In the brief business session, Jeff Davis gave a treasurer's report and announced the organization's name would be changing from Lions Club International to simply Lions International. He asked members to log their service time for the month and announced that the club's application for an American Rescue Plan grant had been approved.

President Damron announced that next month's meeting will feature a guest speaker from the Kiwanis Club and said she intended to challenge them to participate in a Lions/Kiwanis foosball match. She also told of the club's raffle project. A handmade quilt and a banjo will be raffled with the drawing to be held on Gravette Day, Aug. 13. Ticket prices were set at $1 each, six for $5, or 25 tickets for $20. Tickets are available from any Lion member and will also be available at the farmers' market each Saturday and at Third Thursday events on Gravette Main Street.

The Gravette Lions Club meets the first and third Tuesday of each month at 12:30 p.m. at the Billy V. Hall Senior Activity Center. Visitors and prospective members are always welcome. 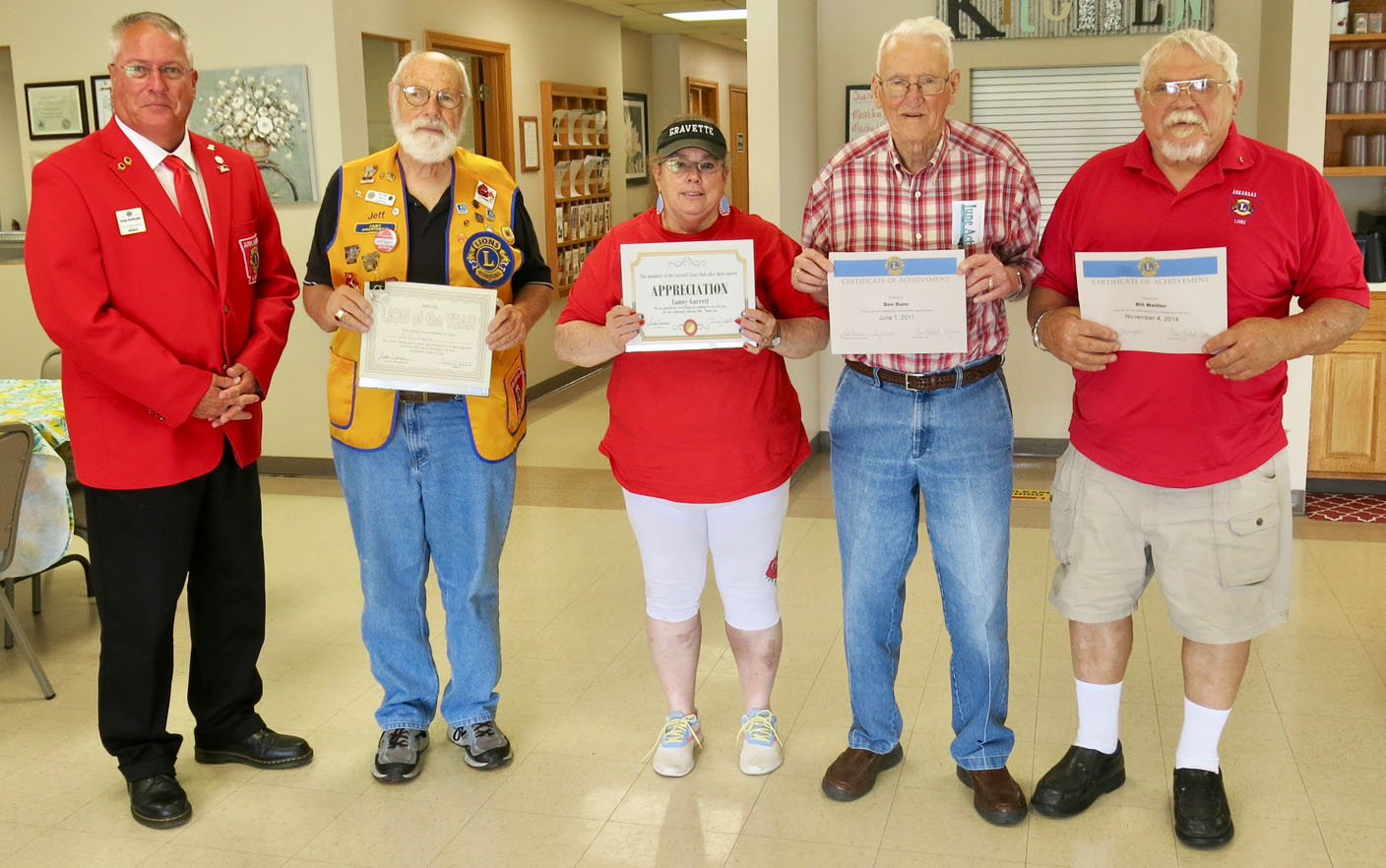 Westside Eagle Observer/SUSAN HOLLAND Dean Rowland (left), district governor elect for Lions International, poses with honorees from the Gravette Lions Club after their meeting Tuesday, June 7, at the Billy V. Hall Senior Activity Center. Pictured with Rowland are 2021-2022 Lion of the Year Jeff Davis; Snooky Garrett, displaying her husband Lanny's award for service to the club and members Don Dunn and Bill Mattler who received certificates for length of service. 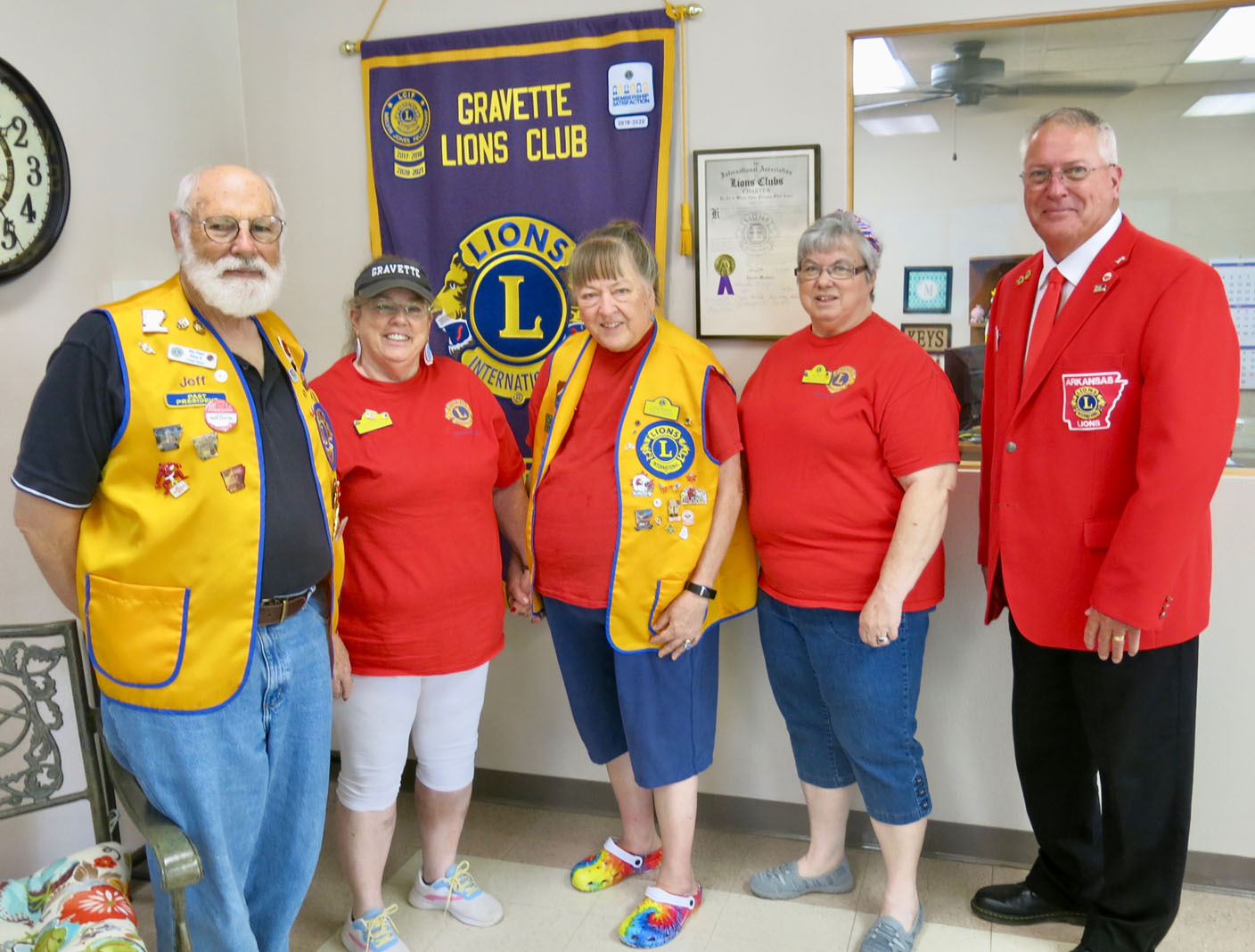 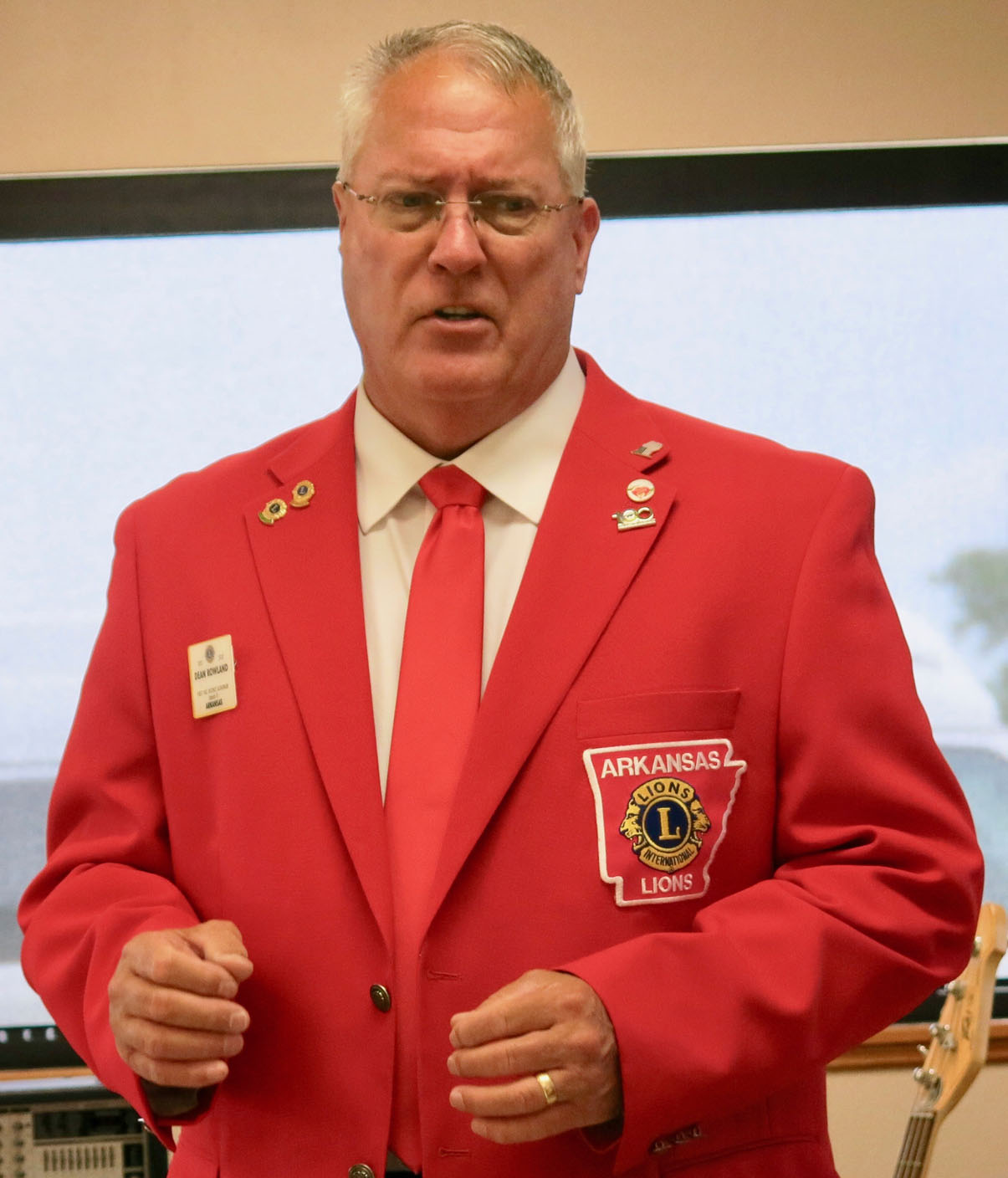 Westside Eagle Observer/SUSAN HOLLAND Dean Rowland, of Ozark, district governor elect for Lions International, speaks to members of the Gravette Lions Club at their regular meeting Tuesday, June 7, at the Billy V. Hall Senior Activity Center. Rowland spoke to the club about one of his passions, shark fishing, and encouraged them to recruit new members and "have fun along the way." He will be inaugurated June 22 in Montreal.