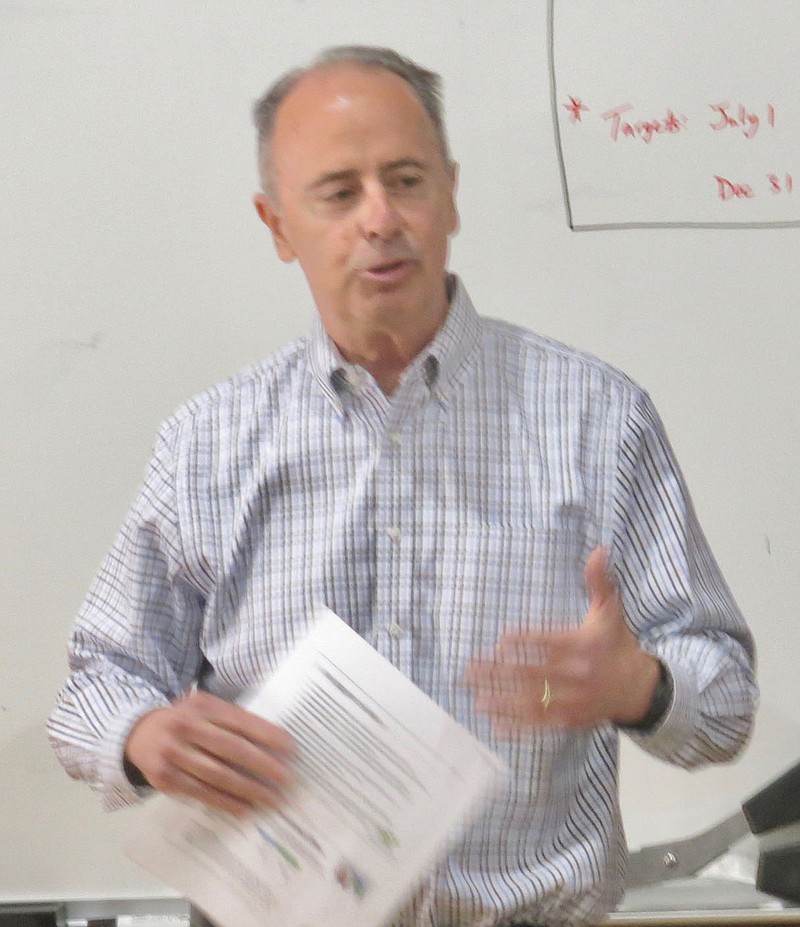 Westside Eagle Observer/SUSAN HOLLAND Steve Harari, president of Narrow Path Advisors, was speaker for the March 16 meeting of the Greater Gravette Chamber of Commerce. Harari spoke to the group about selling a business and gave suggestions about how a business owner could position his company in order to best maximize its value. Some members of the Rogers-Lowell Chamber of Commerce were guests at the meeting.

GRAVETTE -- Steve Harari, president of Narrow Path Advisors, was the speaker for the March 16 meeting of the Greater Gravette Chamber of Commerce. His topic was "Selling Your Business -- How to Maximize Your Valuation."

He noted that every business is unique and there are no "cookie-cutter" rules about selling one's business but cautioned that the worst thing one could do is put a "For Sale" sign in the window because that will immediately reduce its value.

Harari gave a brief summary of different types of business sales and valuation methods and explained much of the terminology related to selling one's business. He advised his listeners to be sure not to forget how taxes could be a big factor in how to structure the business. In fact, he said it is sometimes beneficial to take a few months and incorporate in a different manner before selling.

He cautioned business owners not to overlook their intangible assets, such as the goodwill built up by a longtime business with an established reputation. He urged them to be sure and clear up any financial issues such as disputes the company might be involved in or impending litigation and advised seeking the services of a lawyer, CPA or experienced business negotiator to help resolve such problems.

Harari highly recommended planning ahead. He suggested a business owner determine in advance what he wants and prepare so he can position his company to bring its highest price.

"Start early!" Harari said. "There's nothing wrong with being prepared. The worst situation is to be unprepared and sell under pressure or do it too quickly. The best time to sell is when you don't have to sell."

"Be patient," he concluded. You may only do this once in your lifetime; do it right!"

Harari, who is also president of the Chamber, welcomed everyone to the meeting and recognized guests from the Rogers-Lowell Chamber of Commerce. Another guest was Tyler Dees, a candidate for Arkansas State Senate, who spoke briefly. Harari announced the Chamber had four new members, Benton County Realty, Conner Insurance Agency, Prime Care Medical and Clear Creek Cattle Company.

Harari asked if anyone had a success story to share, and Kelly Hankins, director of academic success at Gravette High School, spoke up to tell about the many applications coming in for courses at the Benton County Career Center. She invited everyone to the career center open house on Thursday.

Reports included a review of the very successful annual gala held on March 3, an announcement of the first annual Chamber golf tournament being planned for Oct. 1, and an announcement of the newly launched Gravette area app. Harari urged members to post their job openings and hot deals on the app and challenged them to introduce it to as many people as possible within the next month. He said the Chamber's goal is to have 500 app downloads by July and 1,000 by December 2022.

Meetings are held on the third Wednesday of each month at the Chamber office on Main Street. The next meeting will be at 11:30 a.m. Wednesday, April 20, with John Newby of Pineville, Mo., as guest speaker. Newby is a business and media consultant and speaker. He is the author of "Building Main Street, not Wall Street," a column that appears in more than 50 communities. Meetings are held at the Chamber office on Main Street. Lunch is included.