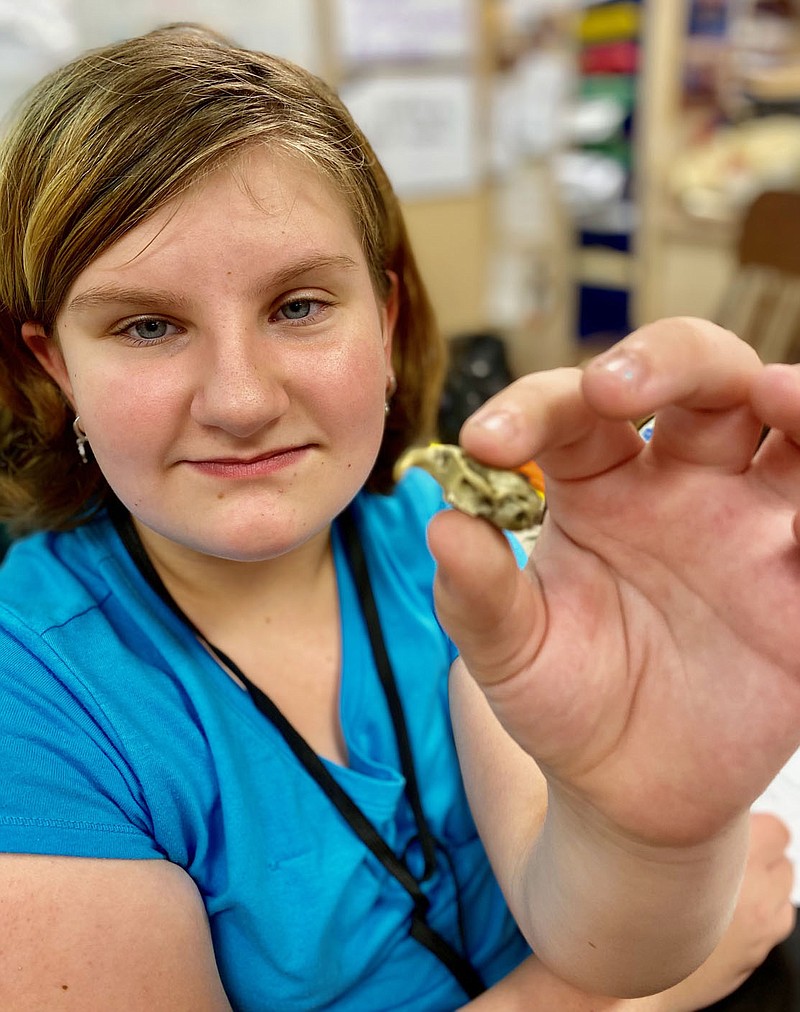 Submitted Photo Gianna Smith, a student in Dorothy Hadley's fifth grade science class, displays a small skull she found during her dissection of an owl pellet. Analyzing the owl pellets to see what they contained was a part of the annual fall study of food chains and ecosystems.

GRAVETTE -- Every fall, students in Dorothy Hadley's fifth-grade science classes learn about food chains and ecosystems. This year, thanks to a Superintendent's Grant Hadley was awarded, they had the opportunity to complete a hands-on activity that helped them understand what type of prey owls consume.

Students learned that "owl pellets are not poop but instead puke," Hadley said. "Owls usually swallow their prey whole but are not able to digest certain parts such as bones, teeth and fur. The undigested parts are made into a ball called a 'pellet' that they spit, or cast, back up. Owls generally cast about two pellets a day."

Each student was given an owl pellet, a paper plate, a toothpick and a chart to help identify the bones. These had been sterilized and were safe for the youngsters to handle, Hadley explained.

"The goal of the experience was to make learning fun and memorable while learning about predator/prey relationships. Needless to say, there were many students who were very unsure about touching the pellet. However, within a few minutes of watching others explore their pellets, every student got involved. Students were able to see and identify the tiny bones from that owl's meal and learn about the owl's diet and the owl's place in the food web."

Hadley said there was much excitement in the classrooms during this activity. Students were extremely eager to show what they were finding and were very engaged the entire time. When they were asked if the activity should be repeated next year, the majority of students said, "Yes," so Hadley is hoping funding will again be available.

Hadley asked her students how they felt while doing their investigation and shared these comments from their replies:

"I loved it but was kinda grossed out at first. Then I found bones so I was happy."

"At first I felt like I was going to start throwing up because of how it looked and smelled but, when time went on, it started to get really interesting and, when I found a skull, I was really interested in doing it."

"I felt happy the investigation was really fun to do."

"I learned that scientists cannot only look at what an owl eats by its barf but also they can determine the population of the animal that the owl ate." 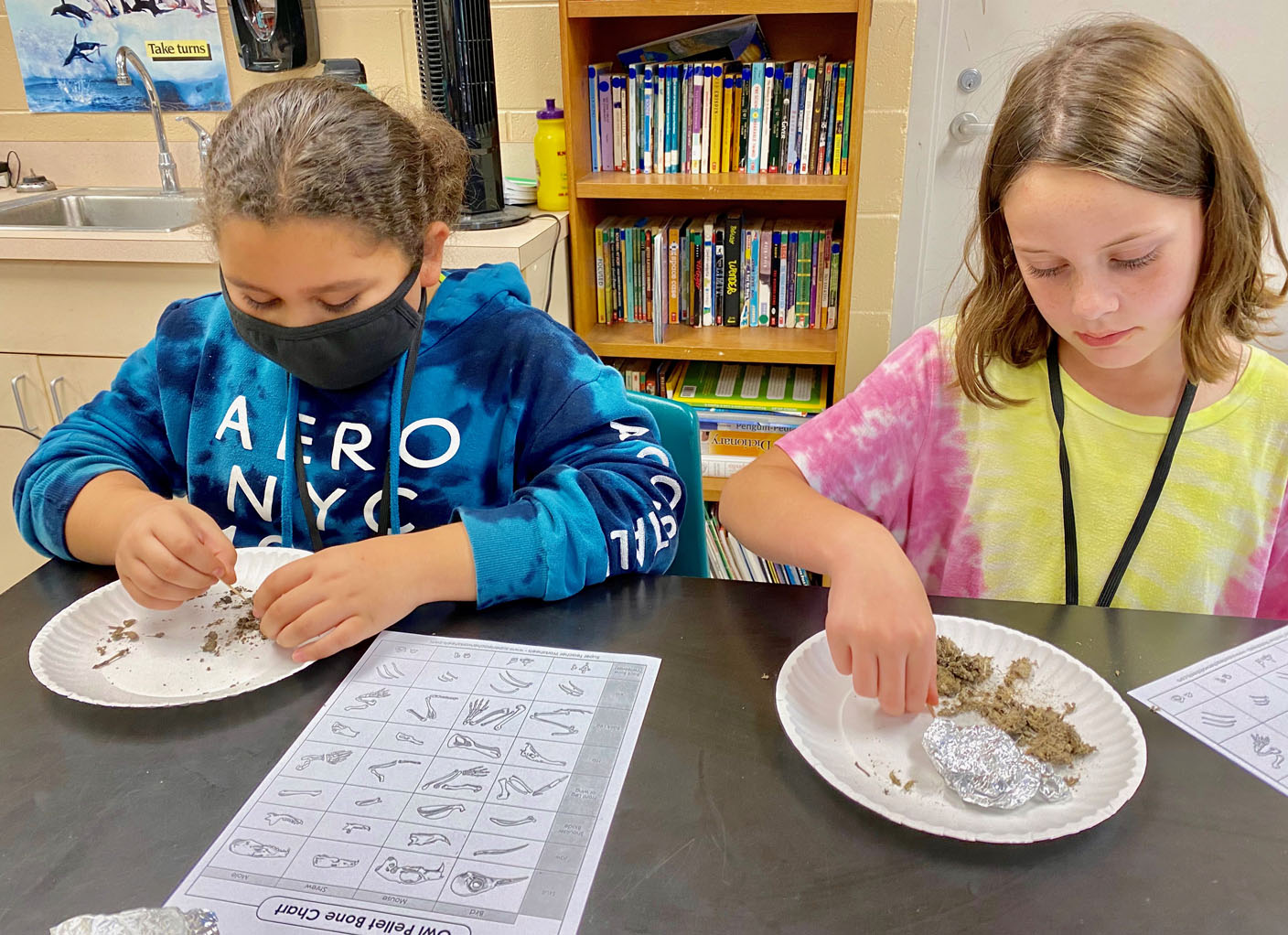 Submitted Photo Vanessa Martinez and Kyrie Pearson sift through the contents of the owl pellets they are studying in Dorothy Hadley's fifth grade science class. The girls and their classmates were able to see and identify bones from the owl's meal, learning about the bird's diet and its place in the food chain. 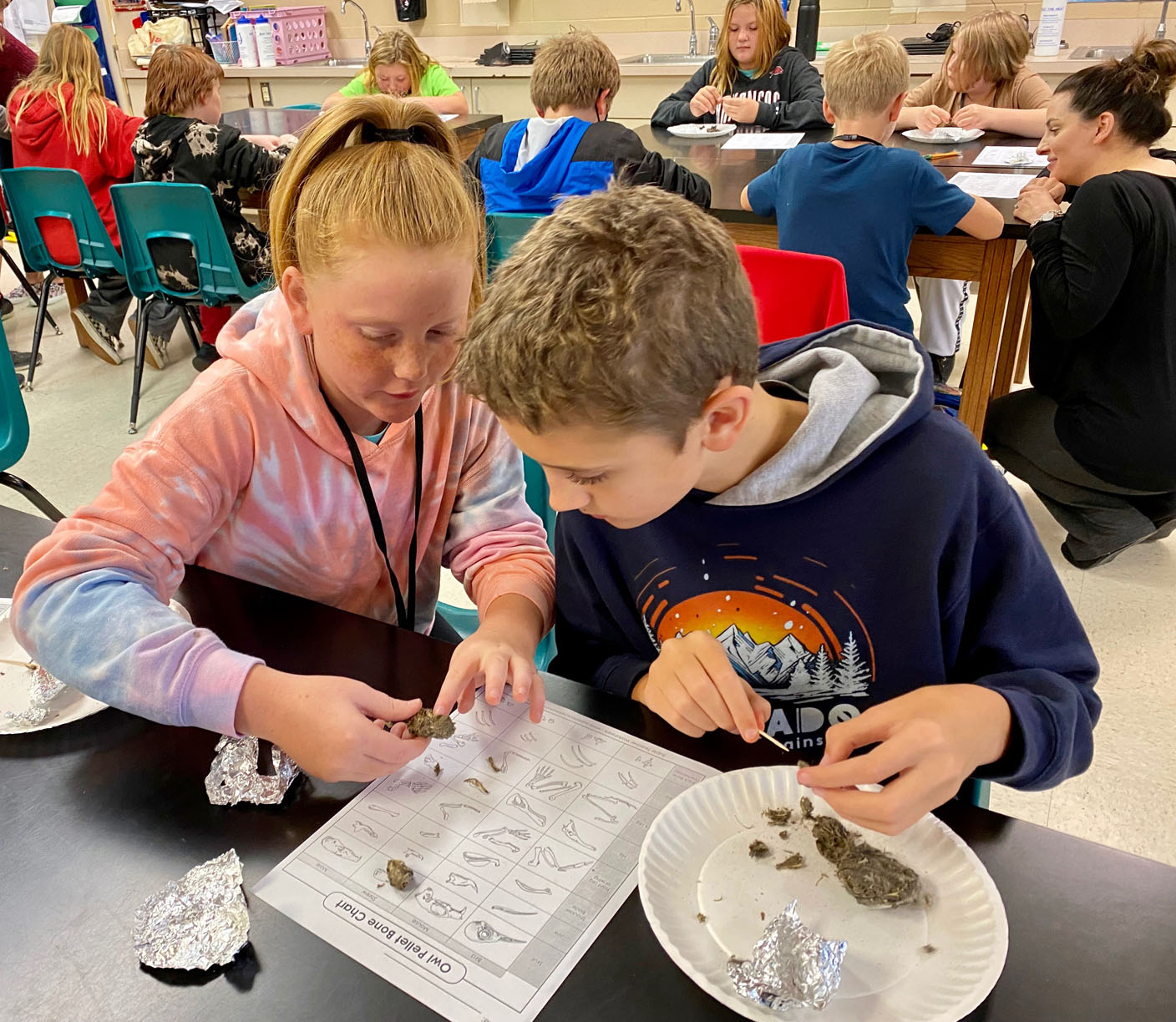 Submitted Photo Rylea Daylong shows her classmate Caden Wellesley the bones of a small animal she found in the owl pellet she was dissecting. These students in Dorothy Hadley's fifth grade science class were working with the pellets during their study of food chains and ecosystems. 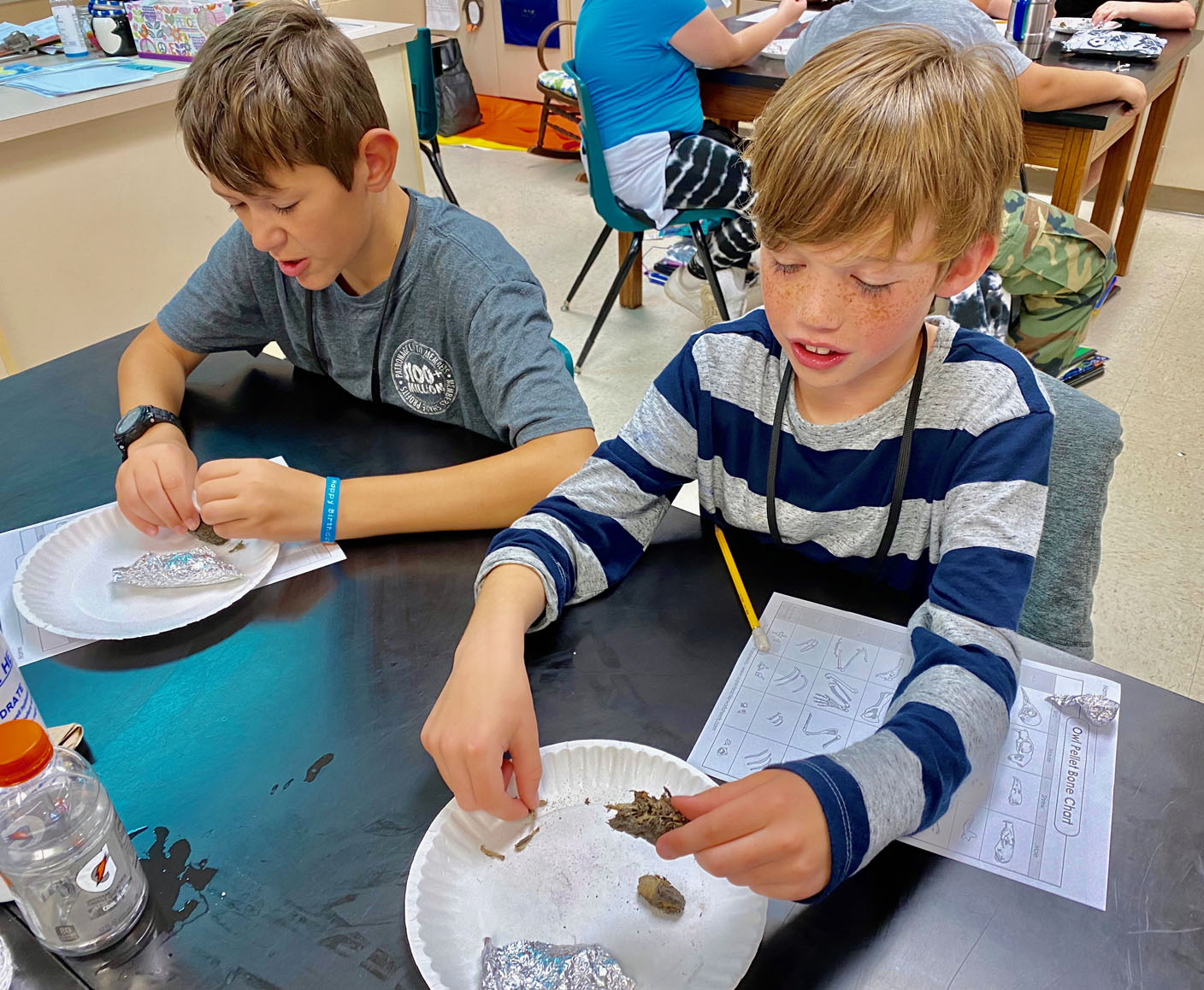 Submitted Photo Quinten Thurlo and Andy Evans study the contents of the owl pellets they are dissecting in Dorothy Hadley's fifth grade science class. Study of the owl pellets revealed what the birds had eaten and helped the students learn about food chains and ecosystems.