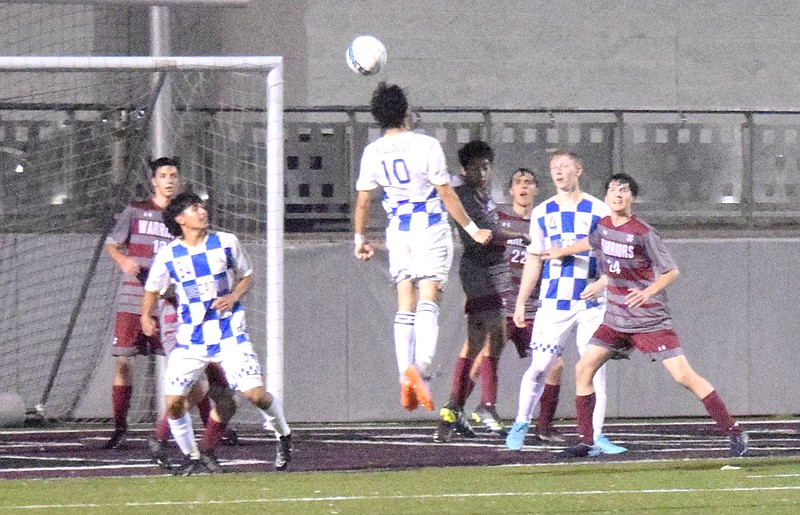 Westside Eagle Observer/MIKE ECKELS Bulldog Kenneth Barrios (10) tries to connect with a corner kick from the right sideline of the field during the Life Way Christian-Decatur soccer match in Siloam Springs Thursday night. Barrios missed the ball which eventually went out of bounds near the left corner marker.

SILOAM SPRINGS -- The first full week of May was rough for the Northwest Arkansas region with almost four days of rain, wind, lots of lightning and deep puddles of water. All this rain took a big toll on the Decatur Bulldog soccer team as it tried to finish the 2022 regular season run before heading off to Harrison on May 12 for the 3A state soccer playoffs.

Decatur was to play two final matches last week, one on May 3 and the final on May 4. But the flooding rains forced the cancellation of the Life Way Christian match in Centerton and one in Eureka Springs. Because of the condition of both fields in Centerton and Eureka Springs, coupled with that of Bulldog Stadium (an alternative site), both games were canceled.

With the final day of the regular season on May 9, both head coaches, along with their athletic directors, had to find a viable alternative for the Life Way-Decatur match. Fortunately, Decatur athletic director Jacque Smith found a place to play the contest, Panther Stadium in Siloam Springs.

So both the Warriors and Bulldogs headed to Siloam Springs to play soccer. But Mother Nature was not quite through with the rain Thursday evening.

With severe storms exiting the area to the east, there was little chance of lightning. So at 7 p.m, Decatur and Life Way hit the field.

As both teams hit the field to begin the second half, the skies opened up and heavy rain began to fall. Since there was no lightning present, officials and coaches decided to continue with the contest. As the half progressed, goals by Marvin Gramajo and Revolorio increased the Bulldog's lead to four.

When the match ended, the Bulldogs took a 4-0 win over the Warriors to continue their second-place standing in the 3A Region 1 Conference and a possible second seed in the 3A Tournament in Harrison May 12-14.

The Eureka Springs-Decatur contest was scheduled for Monday (after press time) on the Eureka Springs track and soccer field. The Lady Bulldogs were to play at 4 p.m., followed by the boys at 6 p.m. 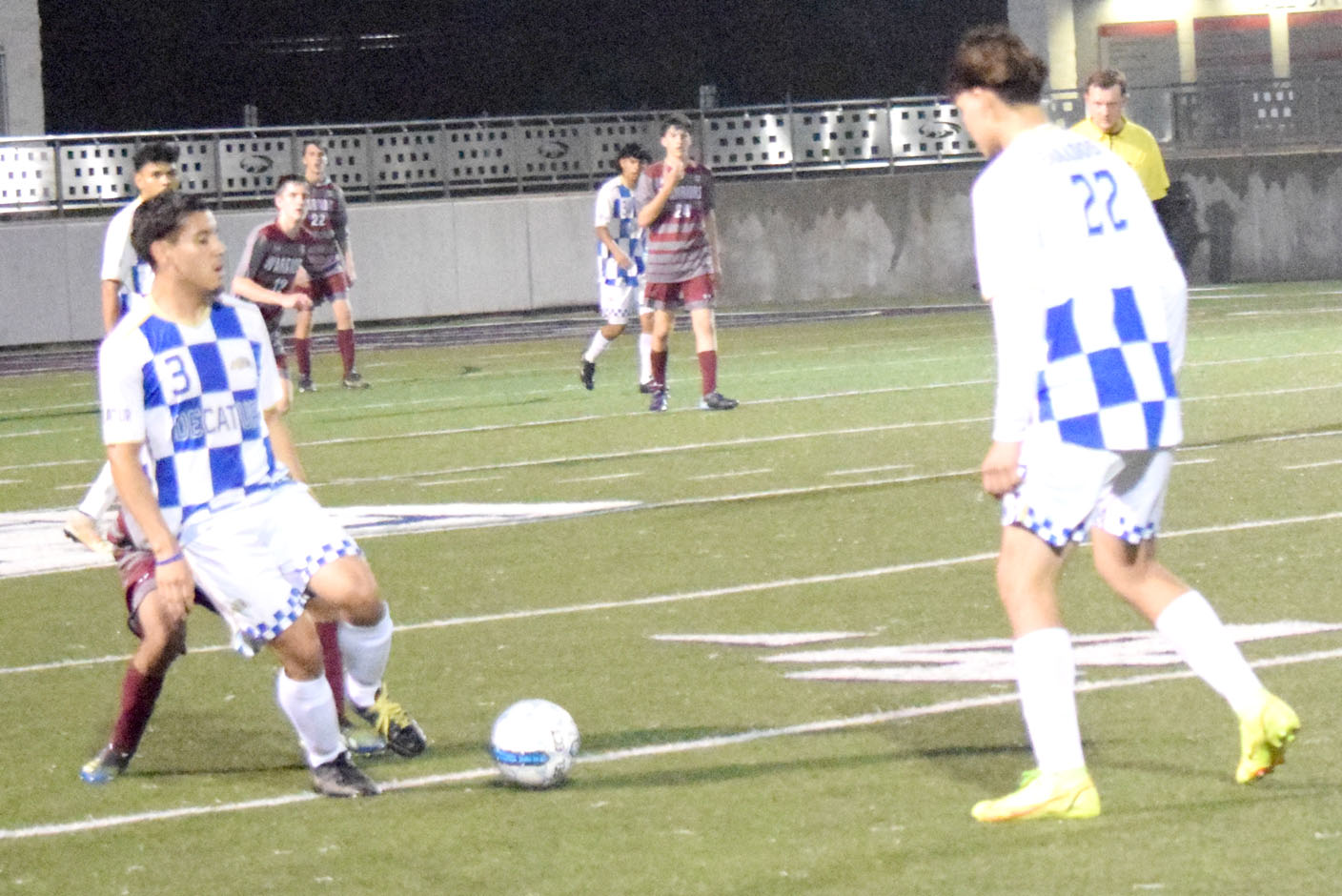 Westside Eagle Observer/MIKE ECKELS Bulldog Andres Revolorio (3) passes the ball off to teammate Edgar Herrera (22) during the first half of the Life Way Christian-Decatur soccer match at Panther Stadium in Siloam Springs Thursday night. The Bulldogs took the conference win 4-0 over the Warriors. 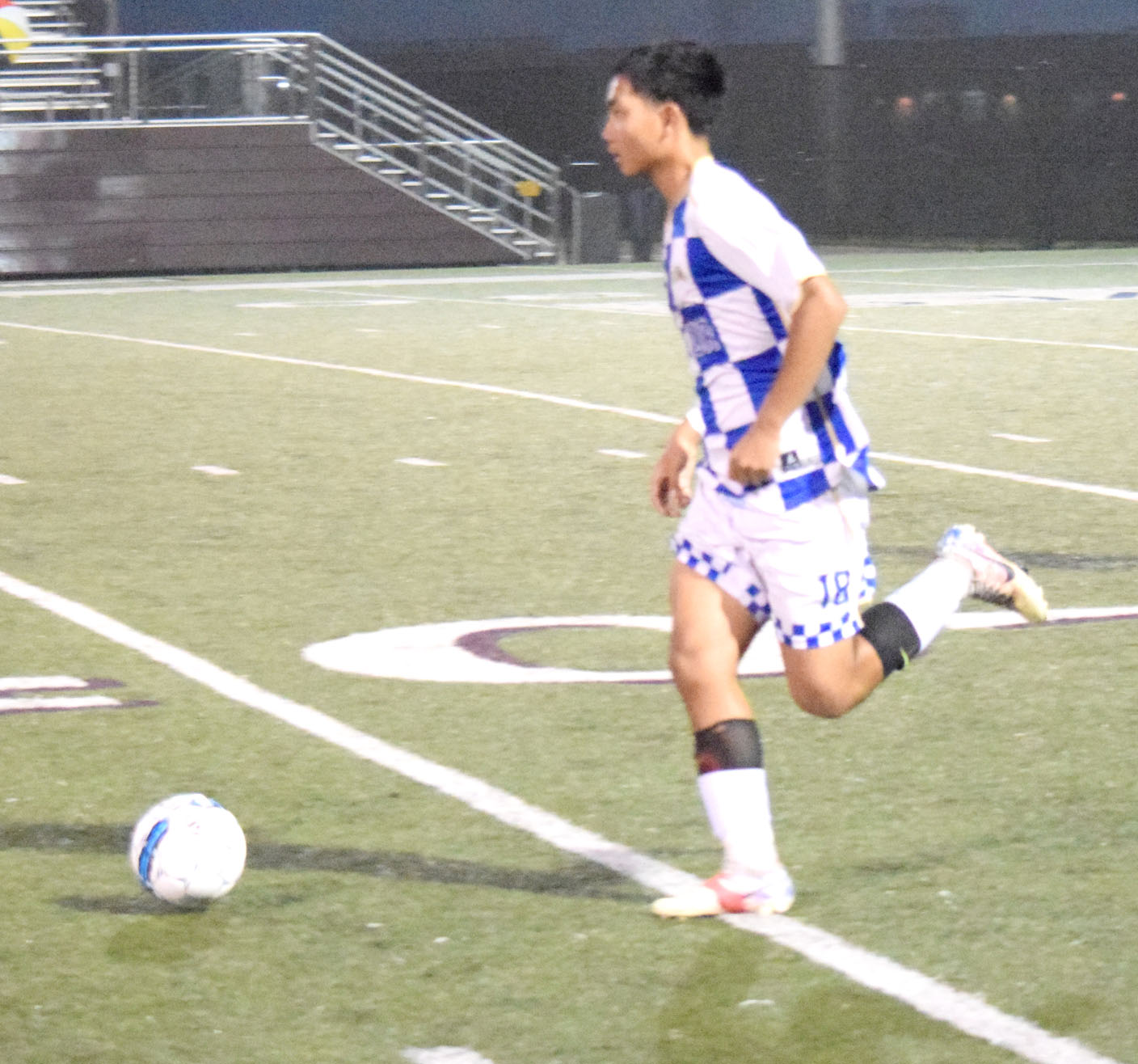 Westside Eagle Observer/MIKE ECKELS Bulldog Robert Thang begins a run toward the Warrior defended goal during the second half of the Life Way-Decatur varsity boys soccer match at Panther Stadium in Siloam Springs Thursday night. The Bulldogs took the conference win 4-0 over the Warriors.