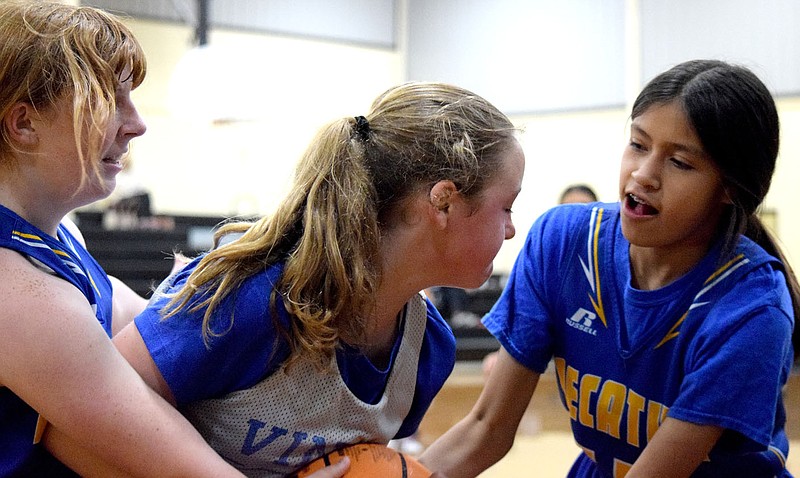 Westside Eagle Observer/MIKE ECKELS A Lady Hornet tries to keep control of the ball as Lady Bulldogs Sydnie Brooks (left) and Kaylen Cruz try to strip it away during the first half of the Decatur-Vinita, Okla., junior high basketball contest in Jay, Okla., Thursday morning. The young Lady Bulldogs took the contest, 22-7, claiming the first of three victories during the Jay Junior High Summer Camp at Jay Middle School.

JAY (Okla.) -- Just because school is out for the summer does not mean that sports are also out. For a small band of up-and-coming junior high basketball stars, a short jog to Jay, Okla. Thursday morning provided some valuable game experience, especially during the off-season period.

The Decatur Middle School Lady Bulldogs left Decatur around 7:30 a.m, bound for eastern Oklahoma and a two-day basketball camp in the old gym at Jay Middle School. Arriving about 30 minutes later, the troupe dressed out and was ready to face its first of three opponents of day 1, the Vinita, Okla., Lady Hornets.

The Lady Bulldogs quickly established control of the contest and just a minute into the first half held a three-point lead. Vinita fought back and a three-point shot put the Lady Hornets up by one. This would be the only lead Vinita held, as the Lady Bulldogs' strong offensive and defensive game plan put Decatur in firm control throughout the remainder of the contest.

By halftime, the Lady Bulldogs were up by seven going into the three-minute break.

Decatur Coach Fess Thompson changed up his strategy in the second half, putting his young squad in a more defensive posture. In the end, the Decatur Lady Bulldogs defeated the Vinita Lady Hornets, 22-7.

In between contests, the young Lady Bulldogs had a chance to watch other seventh and eighth grade teams such as the Lady Hornets eighth-graders, and the Grove, Okla. Lady Reds. This contest ended in a 10-10 tie. This gave the girls valuable experience in analyzing other teams' game plans.

In game two, which pitted the Lady Bulldogs against the Salina, Okla., Lady Wildcats, a trio of back-to-back field goals by Daisy Fuentes in the opening minute of the first half set the pace for the rest of the contest. On the defensive side, Decatur held Salina scoreless until the final two minutes of the half.

When the first half came to a close, the Lady Bulldogs held a 30-6 lead, prompting officials, with both coaches' approval, to declare Decatur the winner and reset for another 14-minute half with the Lady Wildcats. This was a much closer game, but the Lady Bulldogs still pulled off the win, 13-6.

Day two of the Jay summer camp was even more exciting for the Lady Bulldog fans. In the first game Friday morning, Decatur squared off against the Vinita Lady Hornets in the old gym at Jay Middle School. As on the day before, the Lady Bulldogs took control of the game from the start and never relented. The girls took their fourth win in the camp, 18-9, over the Lady Hornets.

Decatur faced two more opponents in the Jay Summer Camp. First was the Quapaw Lady Wildcats, which Decatur easily defeated, 27-6. The next team, the Cleora Lady Cardinals presented a little challenge for the Decatur team. But the Lady Bulldogs prevailed, taking their sixth and final win of the two-day camp, 26-13.

Daisy Fuentes led the Decatur Lady Bulldogs in scoring with 68 points, four of the six-game series in double figures. Sunshine Thor and Sydnie Brooks tied for the second-leading scorer for the series with a two-day total of 23 points each.

Other Decatur Lady Bulldog junior high players scoring during the summer camp included Shylee Morales with 22, Brooklyn Boyd with 12, California Herrington with 12, Leslie Hernandez with 10, and Kaylen Cruz with 4. 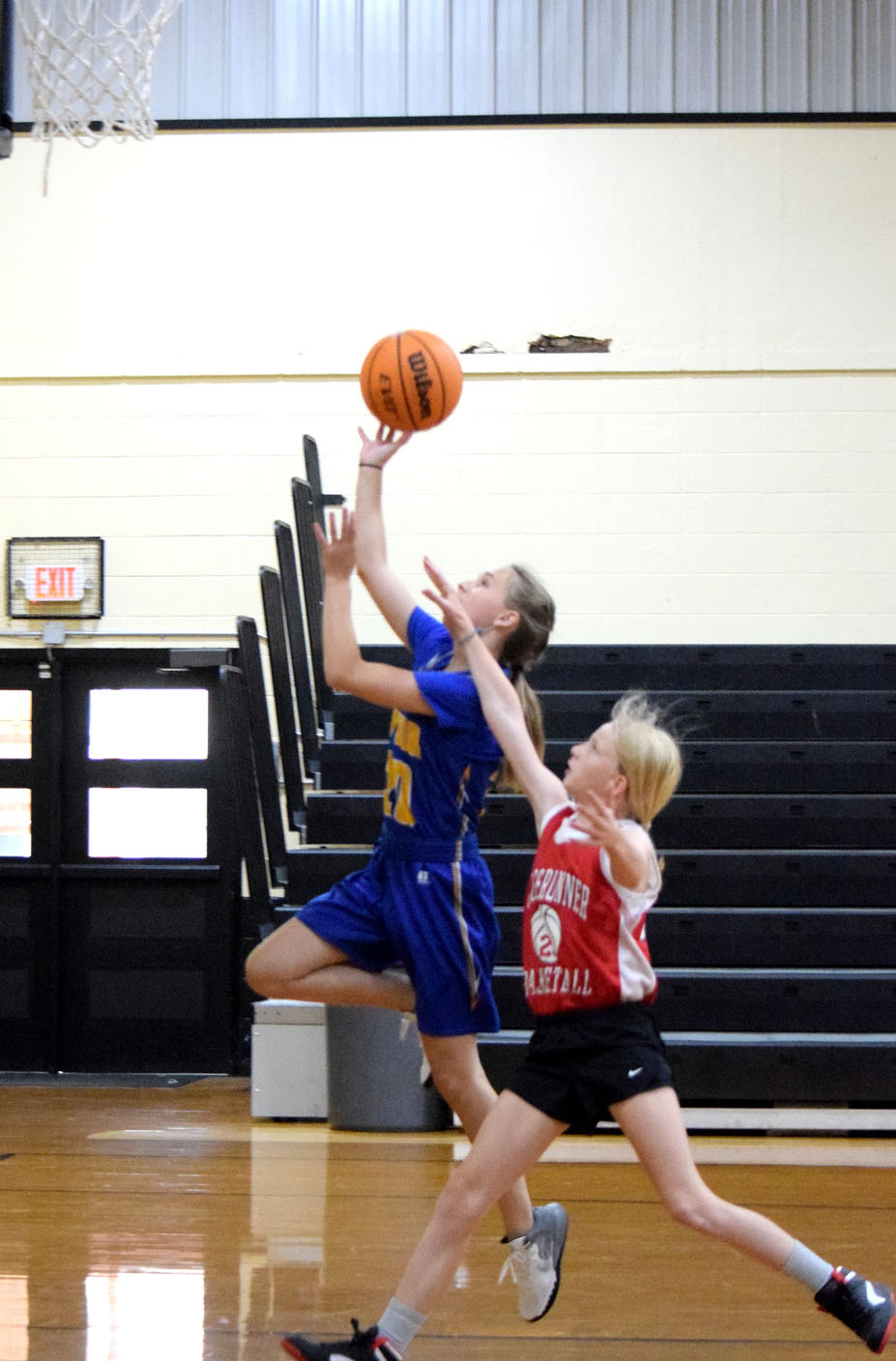 Westside Eagle Observer/MIKE ECKELS With a Lady Ridgerunner on her heels, Lady Bulldog Brooklyn Boyd goes up for a jumper during the first half of the Decatur-Grove, Okla., junior high girls basketball contest in the gym at Jay Middle School Thursday afternoon. Decatur took both 14-minute halves, 20-0. 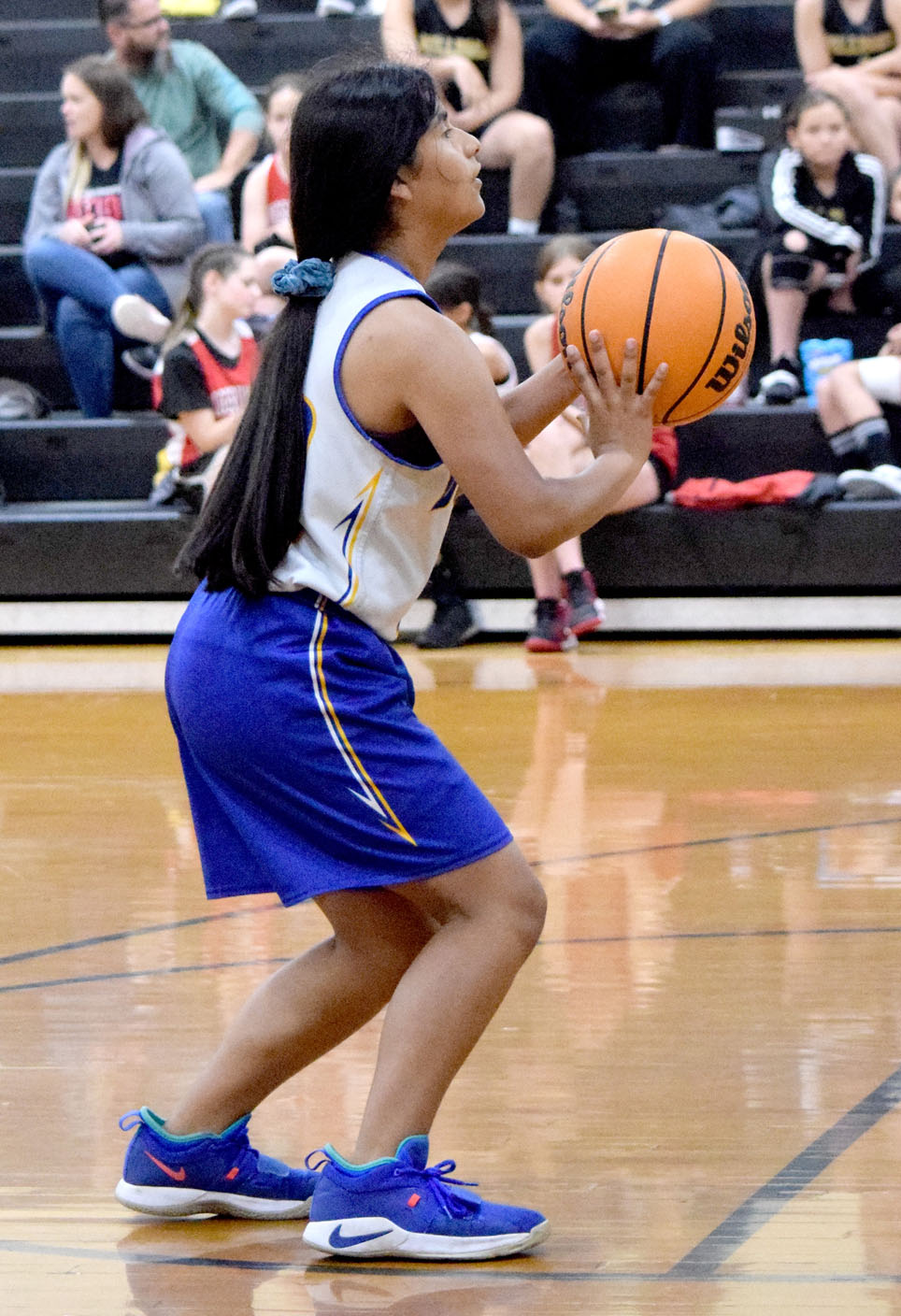 Westside Eagle Observer/MIKE ECKELS Leslie Hernandez attempts a jumper from the top of the key during the Decatur-Salina, Okla., junior high girls basketball contest in the gym at Jay Middle School in Jay, Okla., Thursday afternoon. The young Lady Bulldogs shut out the Lady Wildcats, 20-0. 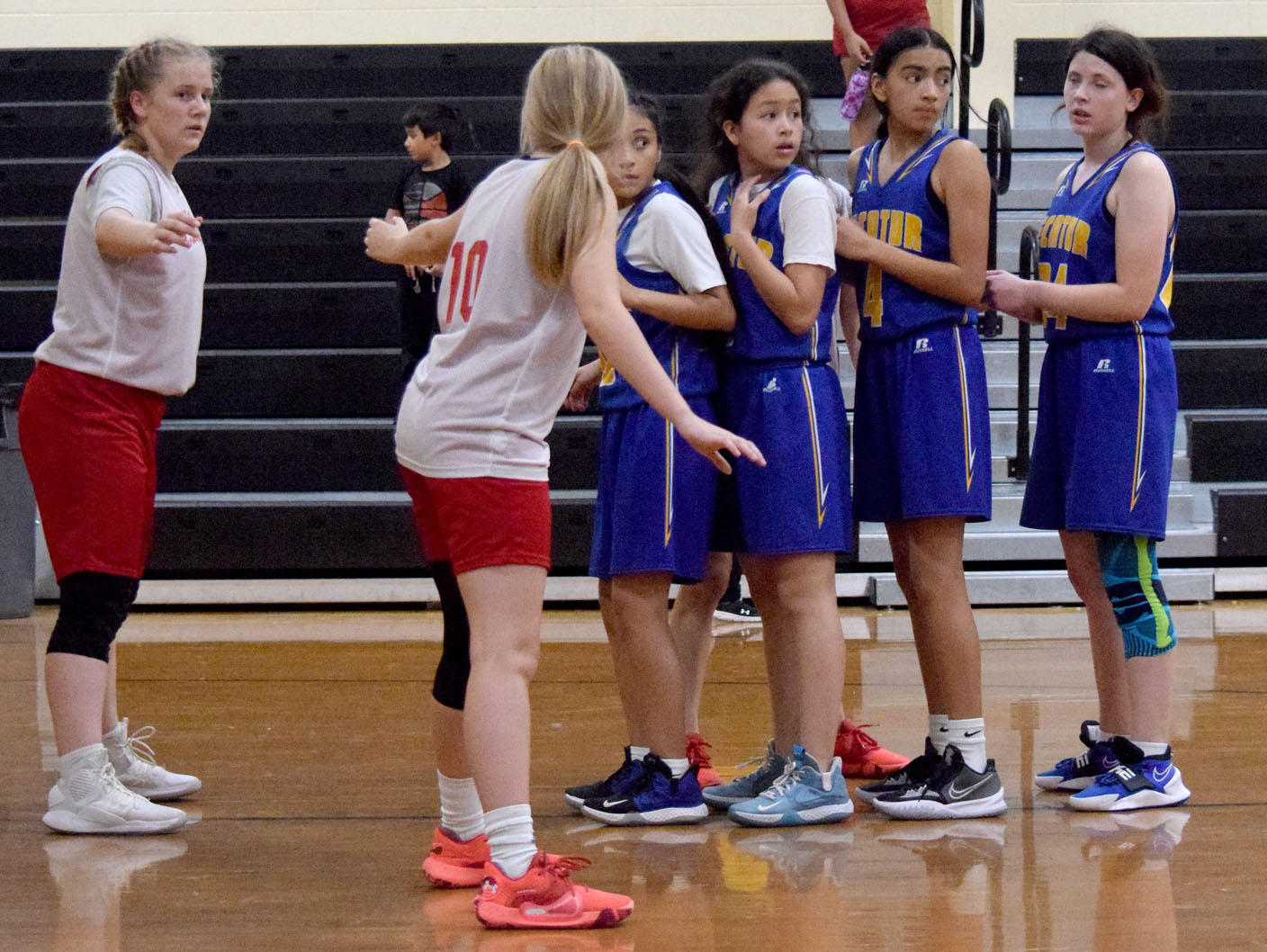 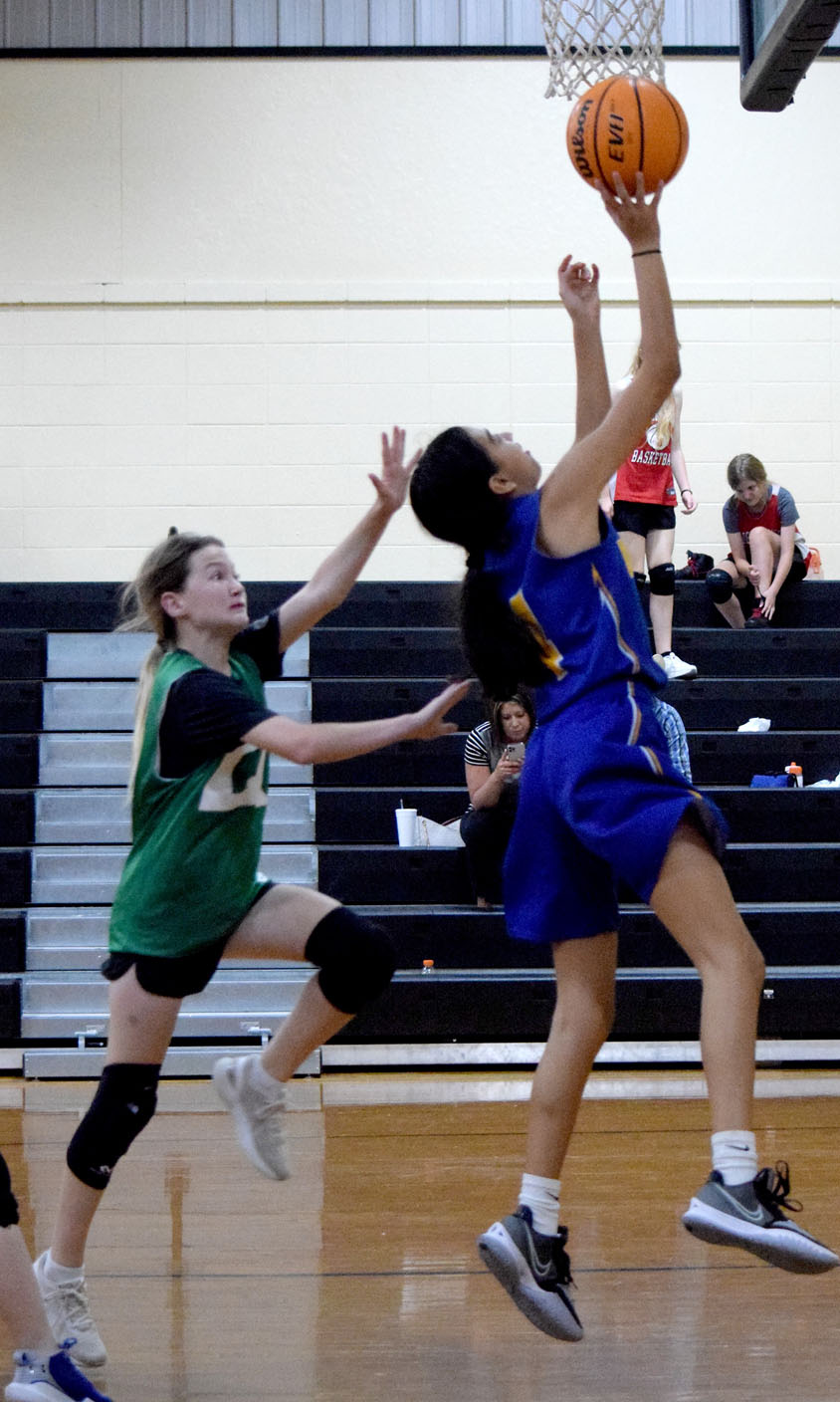 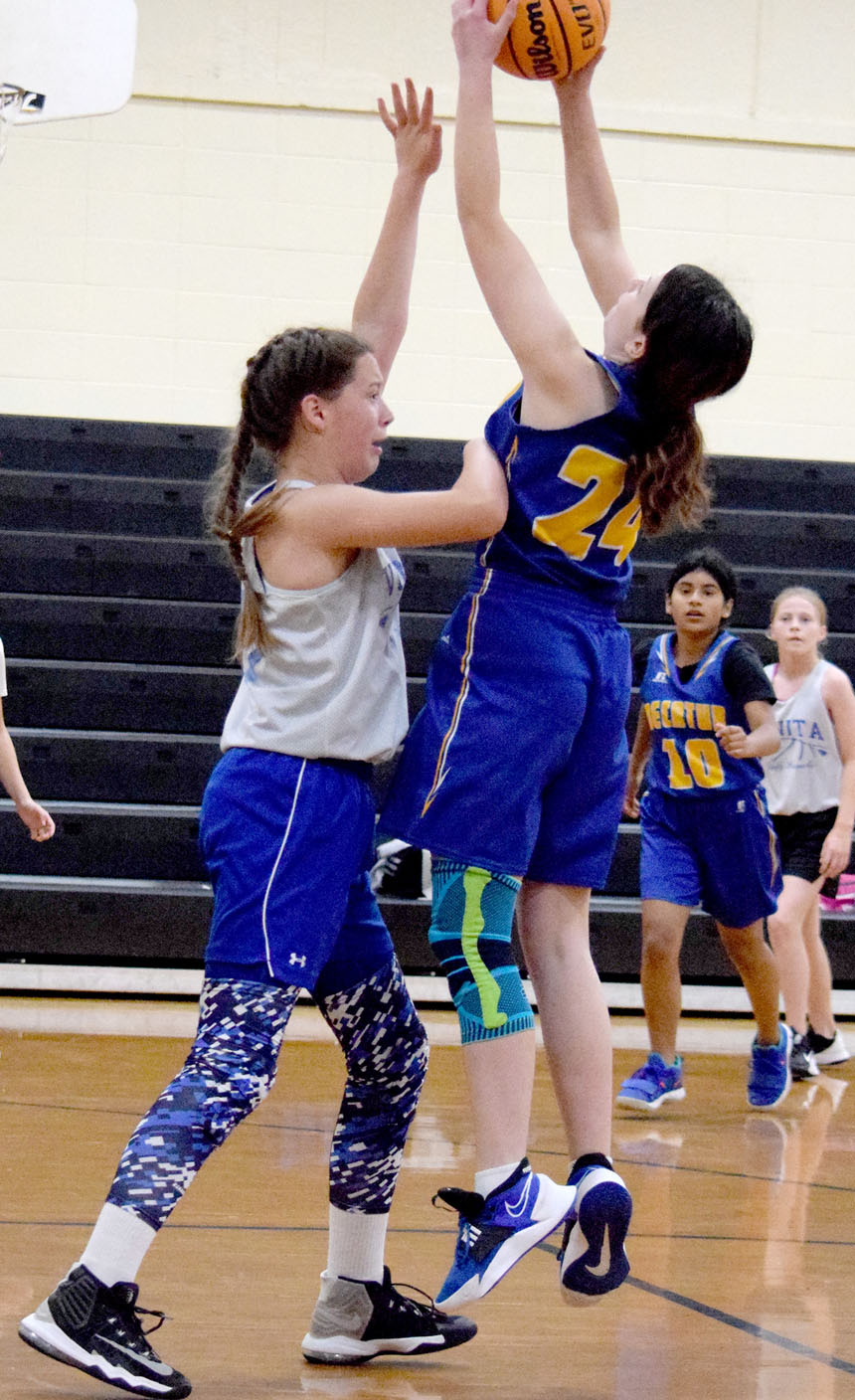 Westside Eagle Observer/MIKE ECKELS California Herrington (24) goes airborne to intercept a pass intended for a Lady Hornet player during the Decatur-Vinita, Okla., basketball contest in the middle school gym at Jay, Okla., Friday morning. The Lady Bulldogs, playing in the Jay Junior High Summer Camp, pulled down the victory, 18-9, over the Lady Hornets.