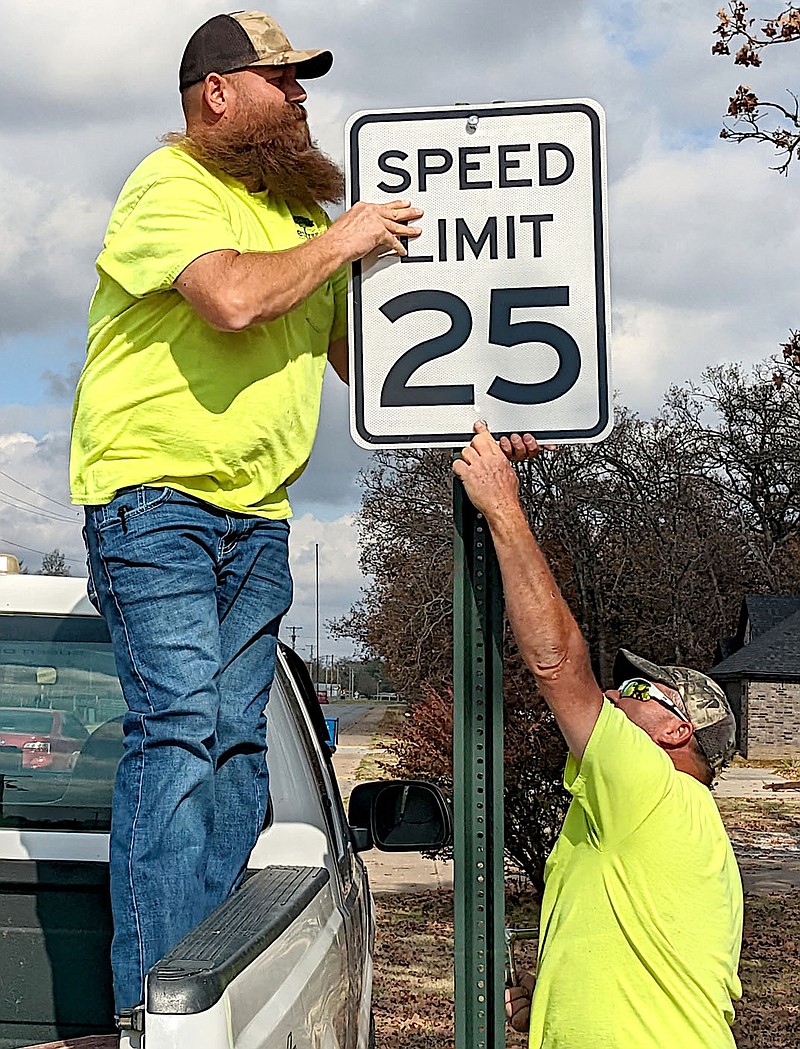 Westside Eagle Observer/RANDY MOLL City of Gentry employees Wes Crawford and Billy Kiddy change a speed limit sign on Pioneer Lane from 30 mph to 25 mph on Wednesday, Nov. 9. The city council on Nov. 7 passed an ordinance reducing the speed limit on the street to match the speed in the school zone.

GENTRY -- The city council in Gentry, at its Nov. 7 meeting, approved entering into a contract for ambulance services and passed ordinances to install stop signs on Otis Avenue at the intersections of East Arkansas and East Crawford streets to slow north-south traffic on the street and with the hope of diverting traffic to Railroad Avenue, and reducing the speed limit on Pioneer Lane from 30 mph to 25 mph.

The ordinances were passed on three readings with a single vote, making them effective 30 days following their passage. Speed limit signs on Pioneer Lane were changed on Wednesday to familiarize motorists with the speed-limit change before it officially goes into effect in December.

The reduction in the speed limit on Pioneer Lane is because of pedestrian and school traffic and the location of portions of the sidewalks being immediately adjacent to the drivable roadway. In addition, the city plans to improve the crosswalks on Pioneer Lane in an effort to slow traffic.

The city's safety committee also recommended the use of speed tables to slow traffic on the busy street, but the street committee suggested trying the reduced speed limit and crosswalk improvements first before installing speed tables.

Data from the two radar units at each side of the school zone over the past year indicated that the majority of drivers entered the school zone between 20 and 30 mph, but there were a large number of motorists exceeding the 30 mph speed limit and some were 20 mph or more over the limit. Some were clocked at 50-60 miles per hour and one at 89 mph.

Vehicles passing the north radar sign between January 1 and Nov. 1 of this year were 349,904 incoming vehicles headed toward the schools and 343,395 leaving the school zone to the north. On the south side, between Jan. 1 and July 1 (numbers were only available for the first six months), there were 67,367 incoming vehicles and 66,442 outbound vehicles.

The council authorized the mayor or the city director of finance to enter into a service contract with Pafford Medical Services for ambulance services in the city for the next four years, beginning at noon on Jan. 26. The cost to the city will be $195,140 annually. Cave Springs, Decatur and Highfill are also being offered a contract with Pafford with costs based on population estimates. The biggest part of the costs will be paid by Benton County at a rate of $980,000 annually.

According to information presented to the council, the contract with Pafford will double the pool of ambulances serving the west side of the county.

Two rezoning ordinances were passed by the council on three readings. One rezoned land owned by SVM22 Homes LLC on the west side of the city, north of Highway 12 and west of Orchard Lane, from A-1 agricultural to R-2 medium-density residential. The second rezoned land owned by Jose Manuel and Ruth Noemi Munoz, located along E. Main Street and S. Robin Road, from R-2 residential to RN residential neighborhood.

The council discussed concerns raised by Sam Katz of Gentry regarding door-to-door salesmen in Gentry who do not heed signs regarding solicitation and trespassing. He suggested establishing a do not knock registry and fines for salesmen who knock on doors listed on the registry and for those who ignore "no solicitation" and "no trespassing" signs.

Joel Kurtz, Gentry's city attorney, cautioned the council in regard to establishing a municipal ordinance aimed at salesmen because of recent court rulings in regard to restricting free speech. He suggested that the safer way for the city to handle the problem without facing court challenges would be to make use of the current trespassing law, which can be enforced if people disregard properly posted signs or do not leave once informed they are not allowed on the property.

The council also heard a complaint from a resident living in the 400 block of S. Giles Avenue concerning a city water leak causing damage to his property and an abundance of mosquitoes, as well as a neighboring vacant property that has not been kept and now houses a variety of wildlife. Councilmember David Page, who lives near the area, said he had put in a repair order for the water leak about two months ago. Mayor Johnston said he would look into the matter and seek to have the issues addressed promptly.

Mayor Johnston presented the council with a copy of his proposed 2023 budget, and council workshops are being scheduled to review the proposed budget and make any amendments the council deems necessary.

Larry Gregory, of Garver (an engineering, planning, and environmental services firm), updated the council on the progress at the new water tower on Y-City Road, saying work on telemetry was still being completed, as well as handling some site issues. He also reported that the city was eligible to apply for American Rescue Plan Act funds and an application was submitted. He said the city was eligible for approximately $1.6 million on its water tower and would be eligible for another $1.8 million on a wastewater plan. He said the city could apply for half of what it spends on the utility projects.

Gregory said the city should hear at the end of this month if it would receive ARPA funds for its water-tower project.

At the close of the meeting, Gentry fire chief Vester Cripps showed the council a drone purchased for the city, which can be used to obtain live feed in locations where it might be unsafe to send a person. He said the drone is also capable of thermal imaging, making it possible to detect hotspots in building fires and to locate people in buildings and remote areas. 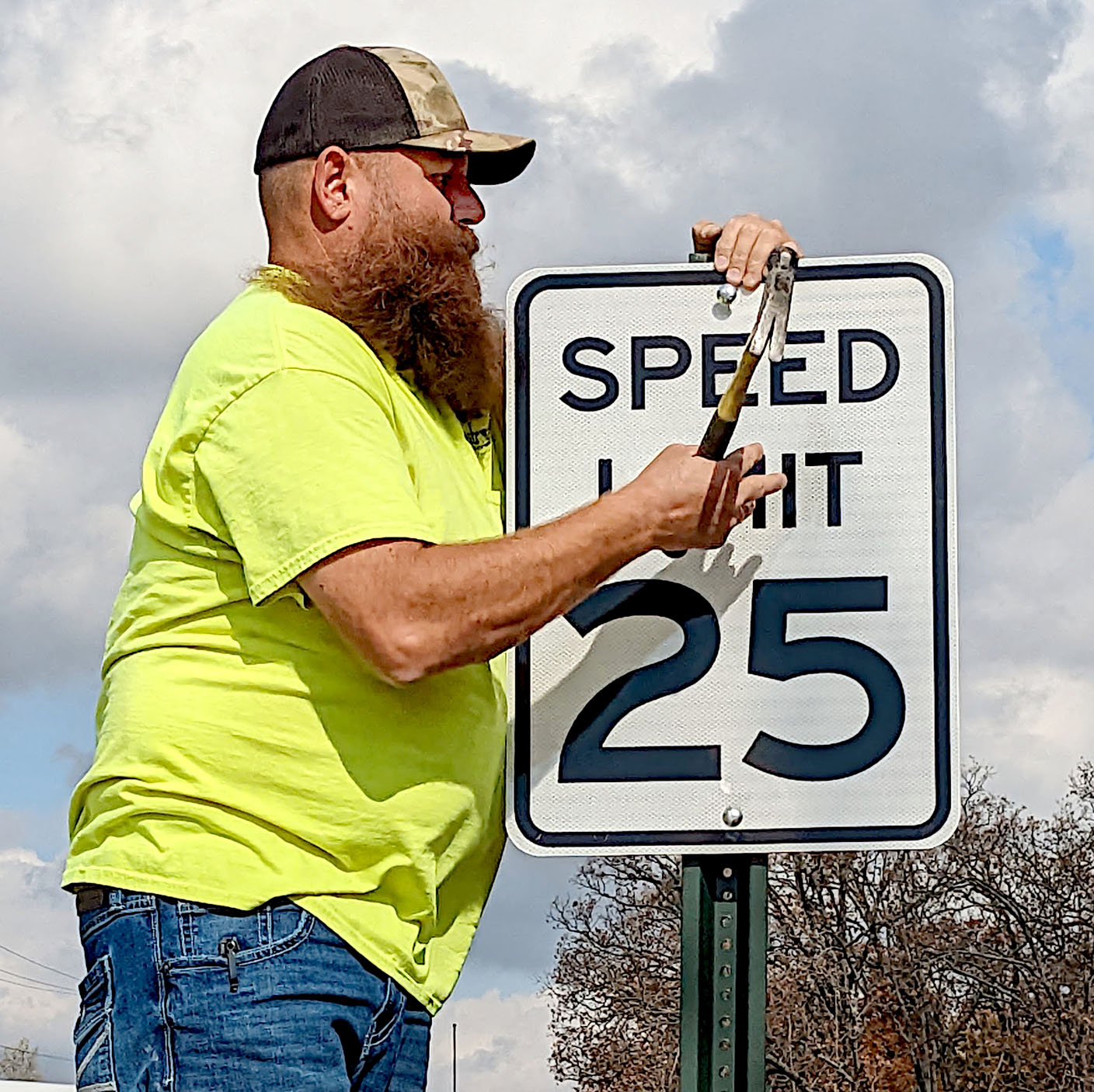 Westside Eagle Observer/RANDY MOLL City of Gentry employees Wes Crawford and Billy Kiddy (not pictured) change a speed limit sign on Pioneer Lane from 30 mph to 25 mph on Wednesday, Nov. 9. The city council on Nov. 7 passed an ordinance reducing the speed limit on the street to match the speed in the school zone. 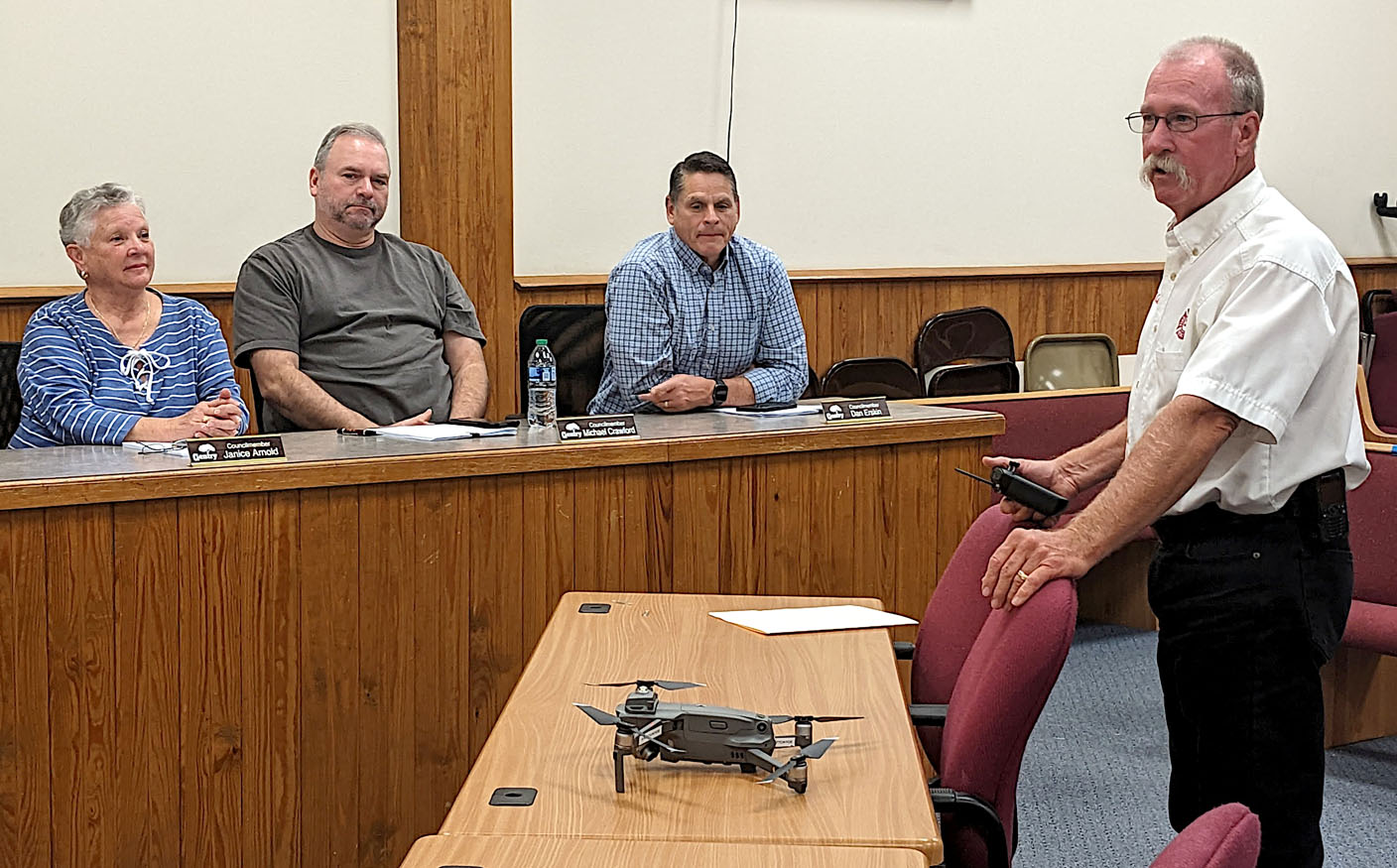 Westside Eagle Observer/RANDY MOLL Gentry fire chief Vester Cripps explains the many uses of a new drone purchased for use by the fire department and police department in Gentry. The drone enables the departments to obtain vital information for both firefighting and law enforcement without sending personnel into dangerous locations. The drone even has the capability to provide thermal imaging to show hotspots in fires and locate people and animals based on heat signatures.