Bulldogs take fourth in own tournament 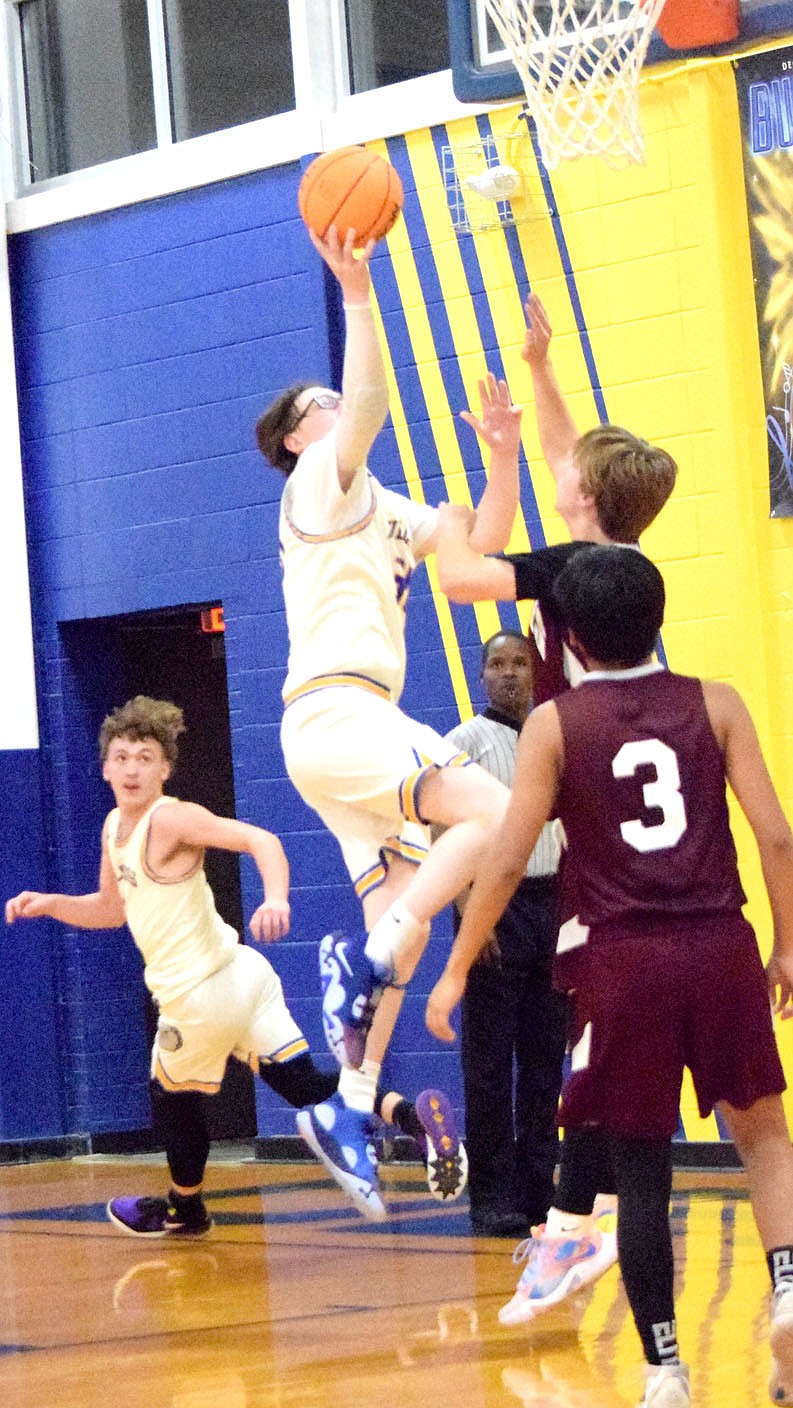 Westside Eagle Observer/MIKE ECKELS Normally an outside shooter, Bulldog Ben Watkins delivers a layup to the basket during the third quarter of the Decatur-Fayetteville Christian basketball contest, which was part of the Decatur Hoop Fest tournament at Peterson-Owens Fieldhouse in Decatur Nov.14.

DECATUR -- With the return of high school basketball comes the return of a tournament that has been absent for nearly two years, due in large part to the covid-19 pandemic in 2022.

Because of the threat of winter precipitation Monday night, the tournament was split into two games in each gym.

The last contest of the night pitted the host Decatur Bulldogs and Fayetteville Christian Academy.

A three-point shot by Decatur put the contest in motion as both battled it out for control of the game. Ultimately, the Bulldogs gained the upper hand and, by the end of the first quarter, led by a field goal.

The second quarter turned into an all-out war as both teams intensified their offense. By the end of the first half of play, the Bulldogs held a three-point lead over the Eagles.

Decatur finally was able to shut down Fayetteville Christian's offensive game plan, at least for a short time. By the end of the third, it looked as though the Bulldogs might pull away with the contest. The Fayetteville Christian Eagles were never able to cut into the lead as the Decatur Bulldogs took the first-round win, 65-54.

Leading the way for the Decatur Bulldogs was Deegan Brooks with 17 points, two-three pointers and five field goals. Teammate Jackson Montano also had 17 points on the night with two threes and five field goals. Two other Bulldogs were in double figures for the night, including JJ Herrera with 11 points, one three and two of two from the free-throw line, and Devin Thor with 10 points. Other Bulldogs adding to the scoring effort included Ben Watkins with seven, Caleb Thompson with two and Brandon Montano with one.

With the win over Fayetteville Christian, Decatur moved into the winner's bracket to face Haas Hall-Bentonville Thursday night. This contest was the only one of the Decatur Hoop Fest games to be decided in a four-minute overtime.

The Bulldogs and Huskies kept the contest close throughout the 16-minute first half, with the Huskies holding a three-point lead going into the break. Decatur took control of the second half and, by the end of regulation, managed to tie Haas Hall at 60 all. The Bulldogs jumped ahead of the Huskies in the first minute of overtime, capturing a 64-60 lead. But the rally was short-lived and the Haas Hall Huskies made eight straight points in the remaining three minutes to take the second-round win, 68-64.

Three Bulldogs were in double figures for the night, including JJ Herrera, who led the way with 19 points, followed by Jackson Montano with 18 points and Deegan Brooks with 13. Other Bulldogs contributing to the effort included Ben Watkins with eight, Devin Thor with four and Brian Ruiz with one.

The loss put the Bulldogs into the consolation round for a third-place finish in the tournament and faced the Gravette Lions Saturday morning. 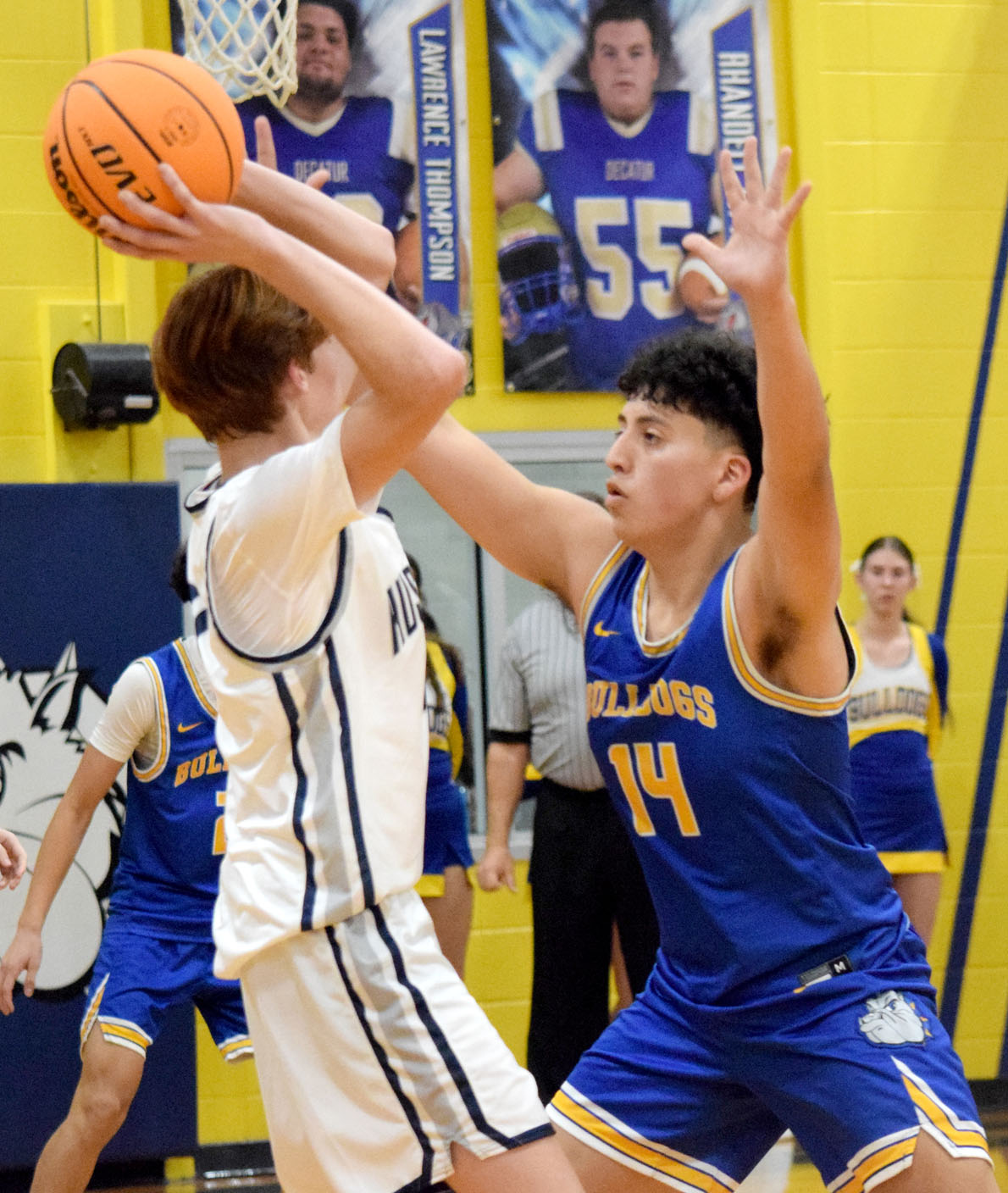 Westside Eagle Observer/MIKE ECKELS Bulldog JJ Herrera (14) cuts off a Dane player’s route to the basket, forcing him to pass off the ball to a teammate during the Decatur-Haas Hall-Bentonville basketball contest at Peterson-Owens Fieldhouse in Decatur Thursday night. The Bulldogs fell to the Danes, 68-64, in overtime.