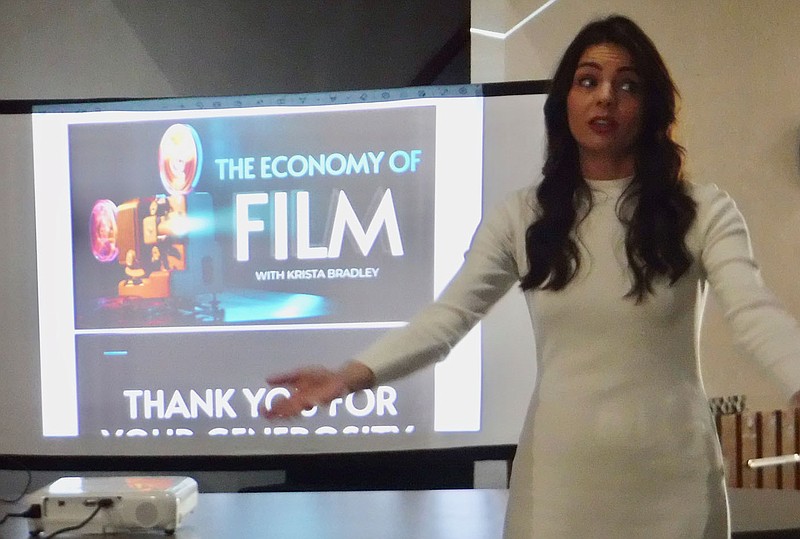 Westside Eagle Observer/SUSAN HOLLAND Krista Bradley, lead actress, writer and director for the film "Wonderland Cave," speaks to members of the Greater Gravette Chamber of Commerce at their regular meeting Wednesday, Nov. 16. Bradley talked about "The Economy of Film" and outlined the process of filmmaking, from idea to distribution. She also offered suggestions about ways area citizens can support filmmaking in Arkansas.

GRAVETTE -- Members of the Greater Gravette Chamber of Commerce viewed the trailer for the upcoming film, "Wonderland Cave," at their regular meeting Wednesday, Nov. 16, and heard from the film's leading actress, Krista Bradley, and art director, Zak Morris. Bradley, who is also the film's writer and director, spoke about "The Economics of Film Production" and gave an overview of a film's development, from original idea to distribution.

Bradley, who is a Northwest Arkansas native, said that "Wonderland Cave" is dedicated to her grandfather and noted it is of special importance to local residents because some of its scenes were filmed on Gravette Main Street and others in nearby locations in Arkansas. Its script has already won awards at the Fayetteville Film Fest and earned her an invitation to the Sundance Film Festival in January.

Bradley said that filmmaking is a billion-dollar industry and film in America supports 2.2 million jobs. She said it is important to get more filming done in Arkansas and to hire local actors and staff if possible. She noted the impact of film on the economy of Montana because of shooting the popular "Yellowstone" series there. New Mexico, Georgia and Oklahoma have also seen recent success with the filming of productions that are based on stories that take place in those states. The production "Tulsa King," with Sylvester Stallone in the starring role, helped Oklahoma bring in $32.8 million in 2021.

"These productions affect tourism," Bradley noted. "People see the films and enjoy them. Then they want to see the places in the films, so they travel there, bringing more tourism dollars into your state."

Bradley gave suggestions for how to become a film community. She spoke of ways citizens can donate or invest in area film production. First, they must persuade their legislators to help secure competitive tax incentives and support their local filmmakers by donating their resources and talent. This will help the local economy flourish, she said.

Bradley offered five specific ways to support the production of "Wonderland Cave": 1) Help secure funding; 2) Be a sponsor by providing coffee, food, loaned items for props; 3) Watch the movie trailer and any related content; 4) Spread the word about the film to others; and 5) "Keep us in your prayers."

Zak Morris, art director of "Wonderland Cave," is a Bentonville High School graduate and spoke briefly about his role in producing the film. His daughter Sam also made a few comments. Sam expressed her desire for added opportunities for future generations. She said opportunities for young people who desire to work in filmmaking have been few but she is glad to see that openings in the industry are expanding. "It's all about connections," she said, "who you know, who you can get for a mentor."

Chamber president Steve Harari welcomed new members Julie Furlow of Botanica, and Samantha Evans of Evans Brothers Property Group. He introduced Becky Harrier, business development executive from Servpro, another recent Chamber member. Harrier spoke briefly about Servpro's work of mitigating damage and restoring properties after disasters. Their services include cleaning up after fires, storm damage, water leaks, mold infestation and vandalism. She said Servpro is the largest company doing such work in the area, with several offices in Benton, Carroll, Washington and Crawford County. The company is a national company, but its offices are locally owned.

Harari announced that there would be no Chamber meeting in December, but the annual meeting will be held at 11:30 a.m. Wednesday, Jan. 18, 2023, with the election of Chamber officers for 2023 and a review of the 2023 Chamber budget.