Lady Lions hoop it up during Decatur Hoop Fest 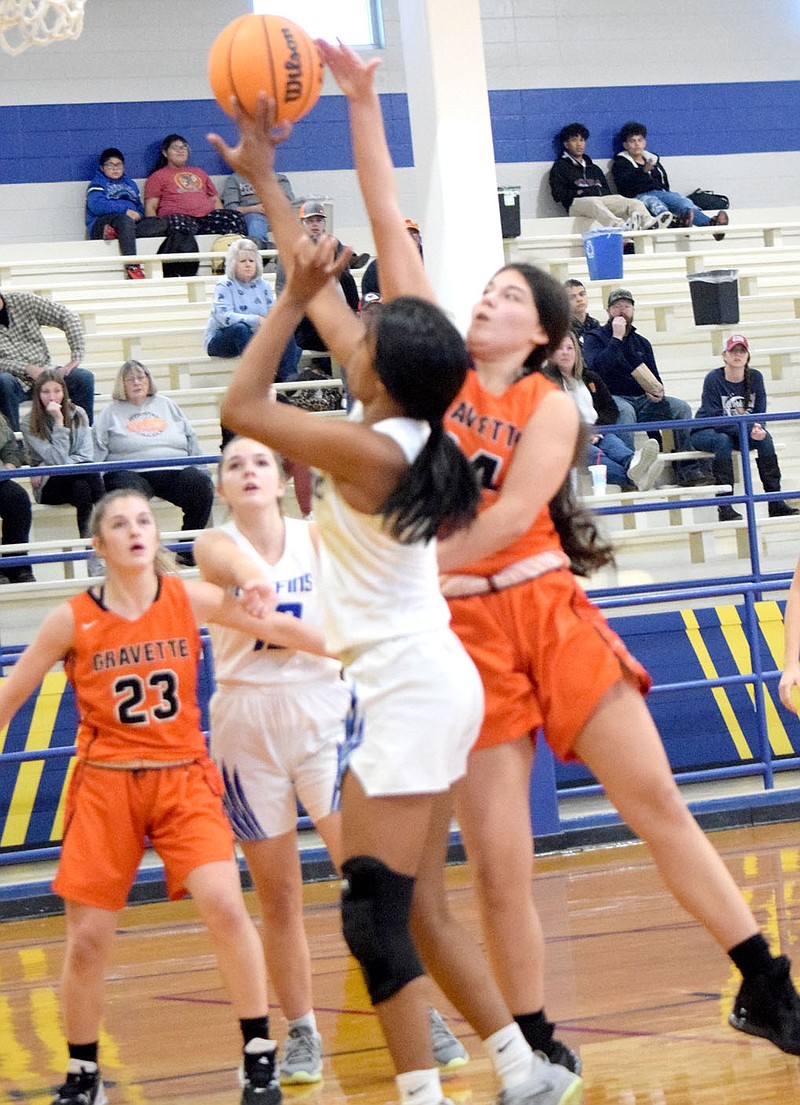 DECATUR -- Two local high school girls basketball teams converged on Peterson-Owens Fieldhouse in Decatur Tuesday night with but one goal in mind, to secure a win in their bracket and move on to the next round of the 2022 Decatur Hoop Festival in Decatur. The outcome of this contest was decided by a mere point.

The Gravette Lady Lion JV basketball team made the short eight-mile trip from the north, while the team's opponent for the night, the Ozark Catholic Lady Griffins, converged on Decatur from the south.

When the appointed time of the battle drew close, both teams took to the court for a little last-minute warmup before the pair of warring armies walked to center court for the opening tip-off.

The Lady Griffins were the first to score on a pair of two-point field goals to lead by four. Soon the Lady Lions followed suit, and the basketball contest was tied at four each. When the eight-minute quarter ended, Ozark Catholic Academy held a slim one-point lead over Gravette.

In the second quarter, the Lady Griffins began to widen the gap, extending their lead to six going into the halftime break.

The Lady Lions came out of the break with but one thing on the team's collective mind, to play catch up and overtake the Lady Griffins for the lead. By the end of the third quarter, the game was tied at 25 all.

The contest came down to the last few seconds when the Lady Griffins hit a basket and took the lead by one. The Lady Lions were never able to sink another basket, and Ozark Catholic Academy took the win, 37-36, to advance to the semifinal round in bracket number two.

Leading the way for the Lady Lions was Kenlee Harris with 11 points. Other Lady Lions who contributed to the scoring effort included Karley Auffett with six, Lauren White and Graci Moffit with four each, Ella Moorman and Kassi Bird with three each, and Ashlyn Fox and Jailyn Jennings with two each.

With the first-round loss, the Lady Lions moved into the losers bracket to face the Haas Hall Rogers Lady Danes Thursday night at Peterson-Owens Fieldhouse.

Gravette had the upper hand, jumping out in front with a total of 20 points in the first quarter and 23 in the second while holding the Lady Danes to a single point and taking a 43 -1 lead into the break.

Will Pittman, Lady Lion head coach, pulled his starters and allowed his second team a chance to gain a few minutes of game time. Gravette pulled off the second-round win over Haas Hall Rogers, 52-6, advancing to the fifth-place contest against the St. Paul Lady Saints at the middle school gym Saturday afternoon.

The Lady Lions had little trouble with the Lady Saints and took the win, 56-26, to secure fifth place in the Decatur Hoop Fest tournament.

Leading the scoring in double figures for the night was Moffit with 13. Auffett and Harris each had 11, and Bird had nine points.