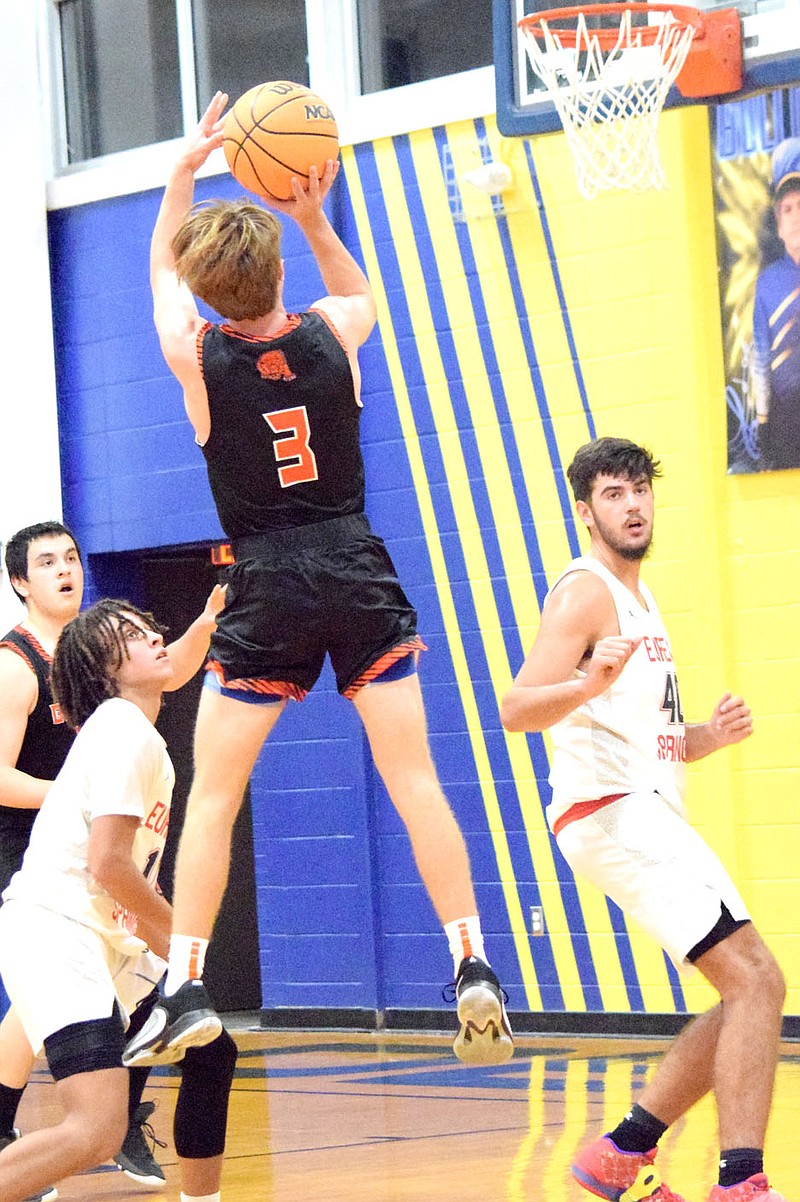 Westside Eagle Observer/MIKE ECKELS Gunnar Woolard gets serious air time as he launches a jumper from the three-point line during the Gravette-Eureka Springs basketball contest in Decatur Friday night. The Highlanders managed to hold Woolard to only seven points during the second round of the Decatur Hoop Fest.

DECATUR -- Head coach Matt Busch and his Gravette Lions made the short six-mile journey south to neighboring Decatur to participate in the first Decatur Hoop Fest at Peterson-Owens Fieldhouse in Decatur for a series of three games starting Nov. 15 with the Haas Hall-Rogers Danes.

The Lions jumped out into a commanding lead early in the first quarter on a run of 14 points (two three-pointers and four field goals) by Gunnar Woolard. Because of Woolard, the Lions were able to open up a 10-point lead going into the second quarter.

As suddenly as the scoring streak began, it went flat, allowing the Danes to catch up, and by the end of the first half the Lion lead was cut to eight.

This was as close as the Danes were able to come, and the Lions took the first-round win, 69-44, and advanced to the second round in the winners' bracket played Thursday night at Peterson-Owens Fieldhouse.

Woolard went on to lead the scoring drive with 29 points, including six three-pointers for the night. Other Lion scorers included Sandoval with nine, Larson with seven, Schulz with six, Dewit, Blevins and Flynt, with four each, Holden Betz with three, Patton with two and Will Betz with one.

The Eureka Springs Highlanders continued to build on their earlier lead and, by the end of the contest, defeated the Gravette Lions, 45-31, to move into the championship round on Saturday.

Leading the way for the Lions was Will Betz with 11 points, followed by Woolard with seven, Dewitt with six, Sandoval with three, Holden Betz and Munoz each with two points.

Gravette went on to defeat the Decatur Bulldogs for a third-place finish in the boys' bracket.