Bobcats roll over Bulldogs in football fight in Berryville 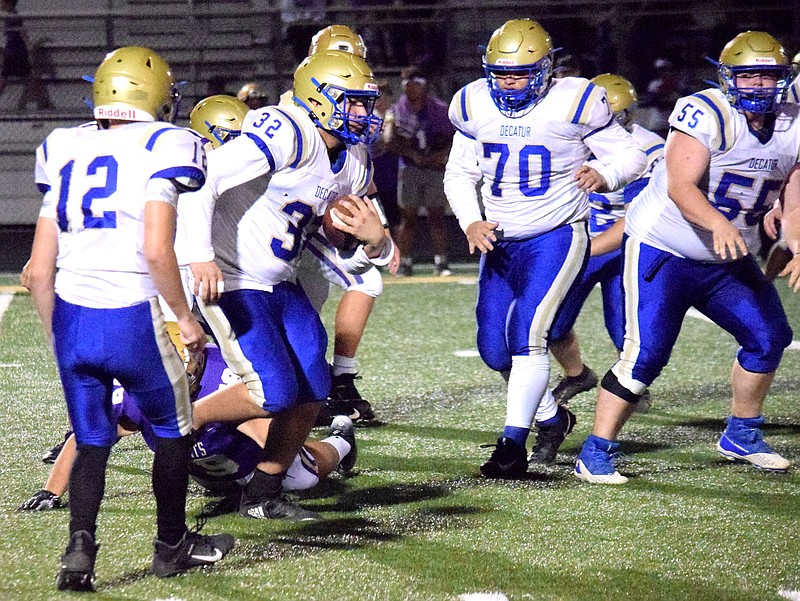 Westside Eagle Observer/MIKE ECKELS Quarterback Brandon Montano (32) finds himself well defended by a pack of wild Bulldogs as he scrambles through an opening during the third quarter of the Berryville-Decatur nonconference football contest in Berryville Friday night. The Bobcats shut out the Bulldogs, 62-0.

BERRYVILLE -- In a non-conference contest in Berryville Friday night, the Decatur Bulldog varsity boys' football team squared off against the 4A Region 1 Bobcats at Bobcat Stadium. The result was a shutout by the Bobcats and another huge loss for the Bulldogs.

The Bulldogs kicked off to the Bobcats in the opening quarter. From the Bulldog 30-yard line, a Bobcat running back managed to elude several Decatur tackles to cross into the end zone for the first six points of the game. The extra point was good and, with less than 20 seconds off of the clock, Berryville was in the lead, 7-0.

Berryville continued to pile up the points in the first quarter, scoring three more touchdowns and extra points to lead Decatur, 28-0.

Towards the end of the first quarter, the Bulldogs began to move the ball down the field on a pair of passes from quarterback Brandon Montano to Robert Thang. Thang picked off a third pass from Montano and, after eluding several tackles, found open field along the sideline and began a long run toward the goal line. Unfortunately, Thang stepped out of bounds near the 50-yard line, bringing the ball back to midfield and negating the touchdown run.

The first quarter ended with the Bobcats leading by 28.

The Decatur defensive line was unable to stop the Bobcat offense in the second quarter, resulting in a 48-0 lead going into the halftime break.

The Bulldogs came back from the break in good spirits as the team took the field for the second half. Because of the mercy rule, the remainder of the contest was under a running clock.

Late in the third quarter, the Bulldogs began to move the ball downfield, crossing over midfield and down to the 30-yard line. A strong Bobcat defense stopped the Decatur advance, and the Bulldog drive died 30 yards short of the goal.

The Berryville Bobcats scored two more touchdowns by the end of the contest to take a 62-0 win over the Decatur Bulldogs.

In an earlier game played on Thursday night, the Decatur Bulldog junior high lost in a close contest to the Bigelow Panthers, 33-22.

The Decatur Bulldogs will be back in action Friday, Sept. 23, for the big homecoming contest against the Magazine Rattlers, with a 7 p.m. start. 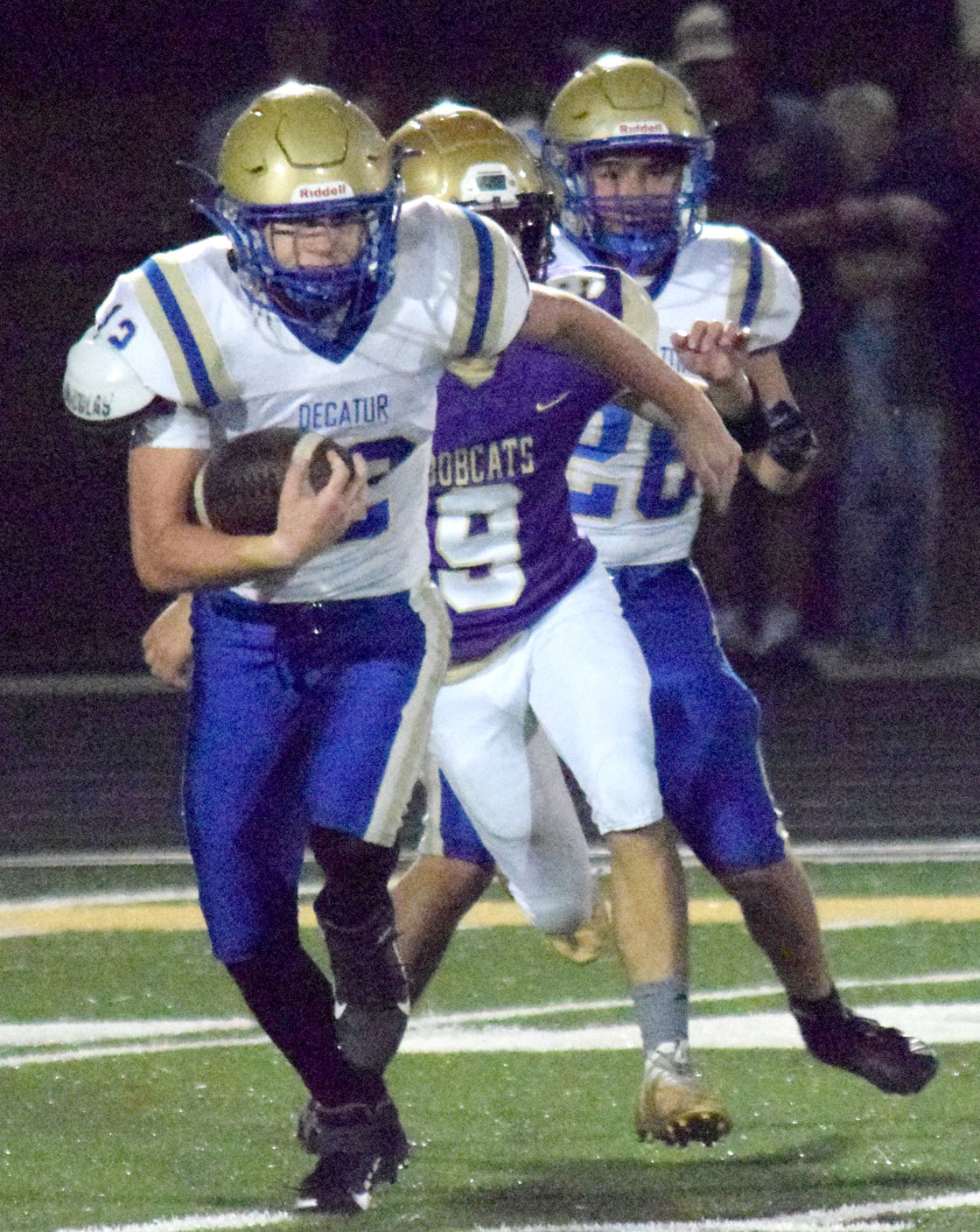 Westside Eagle Observer/MIKE ECKELS Bulldog running back Shane Brown fights off a Bobcat defender to gain a first down during the Friday night Berryville-Decatur nonconference football contest at Bobcat Stadium in Berryville. 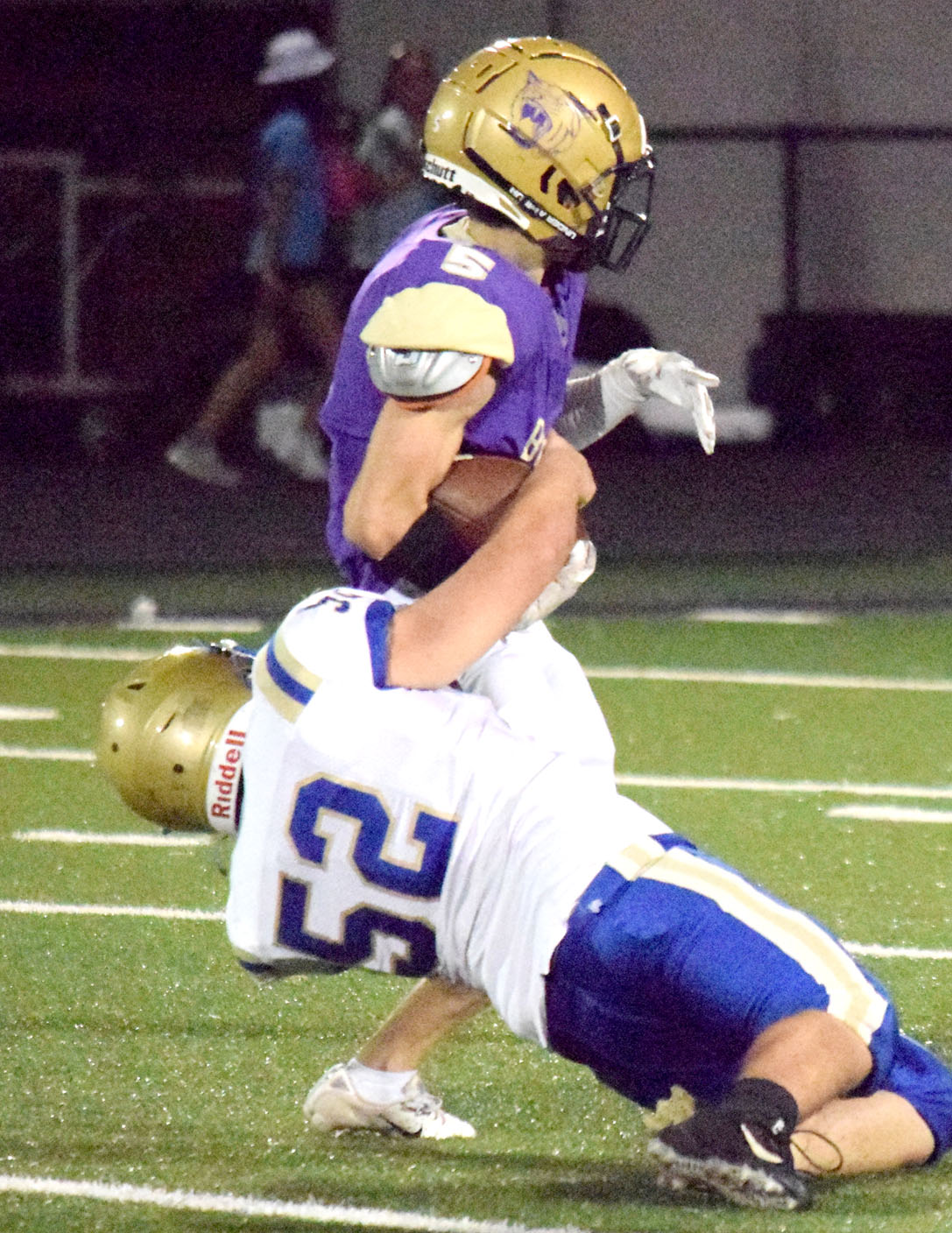 Westside Eagle Observer/MIKE ECKELS A Bulldog defender latches onto a Bobcat running back in an effort to bring the runner down during the Berryville-Decatur nonconference contest in Berryville Friday night.