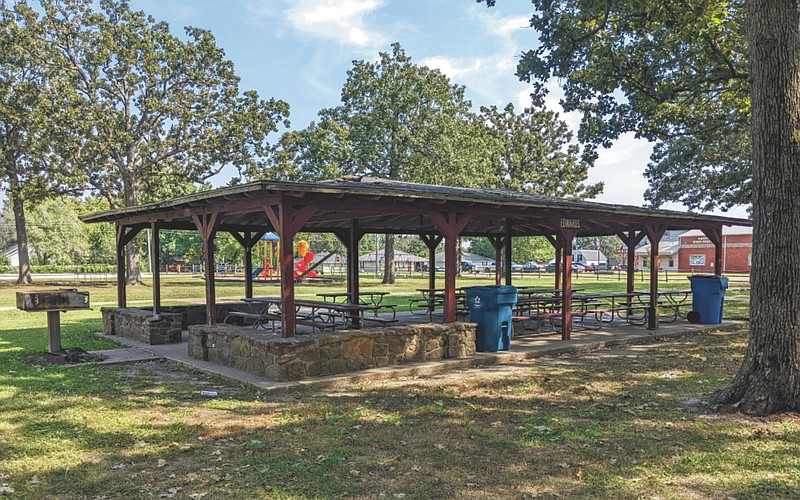 Westside Eagle Observer/RANDY MOLL The need to eventually replace the Edwards Pavilion in Gentry's city park was brought up by Mayor Kevin Johnston at the Sept. 15 city council meeting due to the pavilion's age and wear. The roof is beginning to sag, and falling tree limbs have caused holes in the roof.

GENTRY -- Two ordinances were passed by the Gentry City Council at its regular meeting on Sept. 15, one raising water and sewer rates and the other updating sidewalk specifications in the city code.

The new sewer rate for the first 1,000 gallons of water used or any portion thereof will be $8.79 per month within the city and $14.56 outside the city limits. Those rates decrease in cost per 1,000 gallons as usage goes up:

The rate increase will begin to be reflected on the January 2023 bill.

The second ordinance changing sidewalk specifications was also approved unanimously on three readings with one vote. This ordinance codifies current practice by requiring that sidewalks built in new subdivisions have a 4-inch aggregate base compacted to 90 percent. It also requires that sidewalks wider than 4 feet have joint spacing matching the sidewalk width up to a maximum spacing of 10 feet.

Not having the sidewalk base can cause the sidewalks to crack and fail, according to Kevin Johnston, Gentry's mayor.

A third proposed ordinance, to change the zoning of certain properties for Apple Valley LLC, was referred back to the planning and zoning commission for review since the owners of the property requested the city hold off on changing the zoning of the property at this time due to a change in development plans. The location of the Apple Valley property is between Marion Lee and Taylor Orchard roads, to the west of the intersection of those roads.

Approved by resolution was the 2022 millage rate for the collection of taxes in 2023. The resolution left the General Fund millage at 4.8 mills and the Firemen's Pension and 0.3 mills. Even though the rate did not change, the city is required to pass a millage resolution each year in order to collect those taxes.

Johnston sought council input to see if there was interest in pursuing property purchases of the current Grand Savings Bank location when it moves to its new building, currently under construction on property along Arkansas Highway 59 just north of the current Dollar General store. Johnston said he could see the building serve as a city hall for 5 to 10 years until a larger and more permanent city administration building is built downtown on city property. He also said owning the land there might help the city someday fix the junction of Main Street with Highway 59 so that it is a straight crossing rather than a turn on and off Highway 59.

He said the city also had an opportunity to buy additional land between its current South Park property along the railroad and south of Smith Avenue to connect it to the cemetery property further south. Councilmember Jason Williams said he thought purchasing the land would be a "great addition to the city."

Johnston said he would include these possible land purchases in the 2023 budget planning process.

Johnston said the change would allow employees to take a 30-minute lunch break rather than the current 60-minute break and allow all lunch breaks to be taken closer to noon instead of running into mid-afternoon. He also said the number of people coming into the city office after 4:30 was minimal, with most of those just dropping off a water bill payment that could have just as easily been paid via the drop box.

Another item for future consideration would be to make it a standing policy that the city waive building permit fees for other tax entities. He said the change would allow government agencies to get more for their tax dollars and avoid just passing tax dollars from one entity to another. Joel Kurtz, the city attorney, will prepare a resolution for the policy change to be taken up by the council at its next regular meeting, to be held on Oct. 3.

Johnston again updated the council on the splash pad and sports complex projects, saying that final punch list items were being completed at the sports complex and that cameras to monitor both facilities would be installed and operational within a few days. The cameras are to discourage and prevent vandalism.

Johnston told council members that the city needed to consider the replacement of some park facilities such as the Edwards Pavilion. The much-used pavilion has roof damage and the wood supports and rafters are old and worn.

Larry Gregory of the Garver firm reported on final work at the new water storage facility on Y-City Road and of current smoke testing of Gentry's sewer lines. He said the report from the smoke testing should be complete by the October meeting and provide the city with a better idea of needed updates to the city's current sewer system and regarding the city's needs for a new wastewater treatment plant.

Johnston said the county had received two bids for ambulance service, including a new bid from Northwest Health. He also reported that Gentry may be in the running for up to $300,000 in street paving through the Arkansas Street Aid Program.

Johnston told council members that Act 605 requires water board members to obtain 8 hours of specific training and that the council also serves as the water board, meaning all council members except those who have served for 10 or more years would be required to complete the training. Online options are available.

Johnston told the council the fall cleanup had been scheduled for 8 a.m. to 4 p.m. on October 22-23 at the softball-baseball complex along Main Street. He said waste would be accepted on Saturday only, from 9 a.m. to 1 p.m. He also said tires would be accepted, with a maximum of four tires per Benton County resident. The fall tree giveaway will also be held in conjunction with the cleanup, with trees provided by the Walton Family Foundation. He said the fall leaf and limb pickups would be scheduled later in the fall after leaved have fallen.

Janie Parks, director of the Gentry Chamber of Commerce, reminded council members of the Pickin' Time on 59 event this weekend and of the 7 p.m. Glow Ride on Saturday. She also said a downtown revitalization town meeting was planned at 6 p.m. on Oct. 4 in the McKee Community Room, with the public invited. 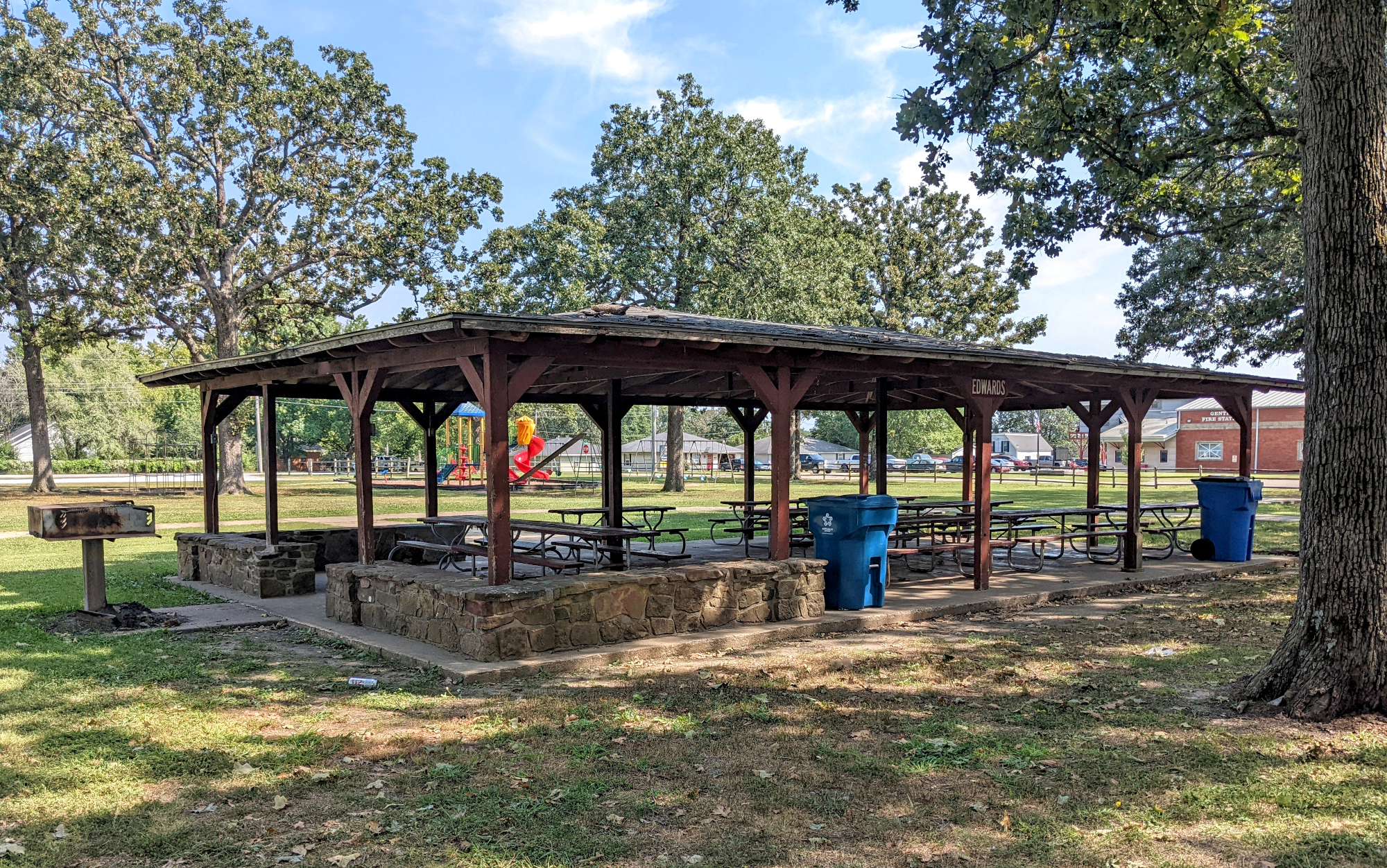 Westside Eagle Observer/RANDY MOLL The need to eventually replace the Edwards Pavilion in Gentry's city park was brought up by Mayor Kevin Johnston at the Sept. 15 city council meeting due to the pavilion's age and wear. The roof is beginning to sag, and falling tree limbs have caused holes in the roof.