Lady Bulldogs sweep week with a pair of wins 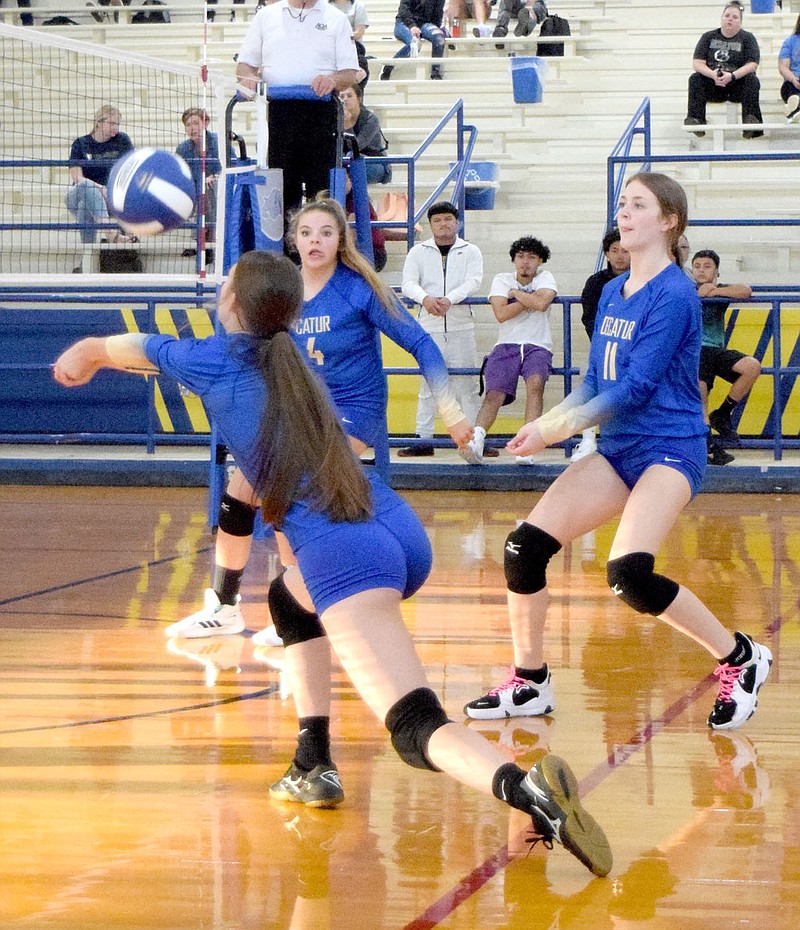 Westside Eagle Observer/MIKE ECKELS Heaven McGarrah’s (center) dive toward the ball pays off as she is able to use a forearm hit to send the ball back over the net during the second set of the Decatur-Founders Academy volleyball match in Decatur Thursday night. The Lady Bulldogs pulled off their second win of the week, 3-1, over the Lady Spartans.

DECATUR -- As the season passes the halfway mark, the Decatur Lady Bulldog varsity and junior high A and B volleyball teams prepared for a pair of home matches at Peterson-Owens Fieldhouse in Decatur on Sept. 13 and 15.

Starting the week was a match with the Lady Yellowjackets from Mulberry. Since Mulberry did not have enough junior high players to form a B team, the Sept. 13 contest pitted the junior high A and varsity teams against their Lady Yellowjacket counterparts. But all was not lost for the young B team.

And the B team did not let Lankford down. They took the second set, 25-15, to win the match and keep both junior high winning streaks alive.

When the Decatur varsity started its match, it looked as though the Lady Yellowjackets were going to take the first set. But a late rally by the Lady Bulldogs overcame the Mulberry lead and gave Decatur the set, 25-17. From there, it was all Decatur as the team took the remaining sets, 25-18 and 25-13, for the conference win over Mulberry.

When Thursday night rolled around, all three Decatur volleyball teams were ready for a tough series with the Founders Academy Lady Spartans.

The Decatur B team had its chance to play a full match with its Founders Academy counterparts. The Lady Bulldogs made easy work of its contest, taking both sets, 25-10 and 25-15.

The Decatur varsity team did not have it as easy. Founders Academy turned up the heat and took the first set, 25-20. When the second set began, it looked as though the Lady Spartans might take a sweep of the match with the team taking as much as a seven-point lead. Lankford took a quick time out in hopes of slowing the Founders' momentum. It worked and the momentum switched in Decatur's favor.

Lady Bulldog Anette Hernandez, Giselle Fuentes and Bell Bell services enabled Decatur to pull ahead of the Lady Spartans and hold the lead for two sets, taking both, 25-17, 25-10.

The Decatur Lady Bulldogs had a close call in the fourth set when the momentum briefly switched in favor of the Lady Spartans, tying things up. But the Lady Bulldogs pulled off the win, 25-22, to take the match.

Decatur volleyball continued its home contest on Tuesday when the team took on the Life Way Lady Warriors at Peterson-Owens Fieldhouse in Decatur (after press time).

The Lady Bulldogs will take to the road Thursday when the three teams travel to Fayetteville for a conference contest against Fayetteville New School. Matches are scheduled to begin at 4:30 p.m. 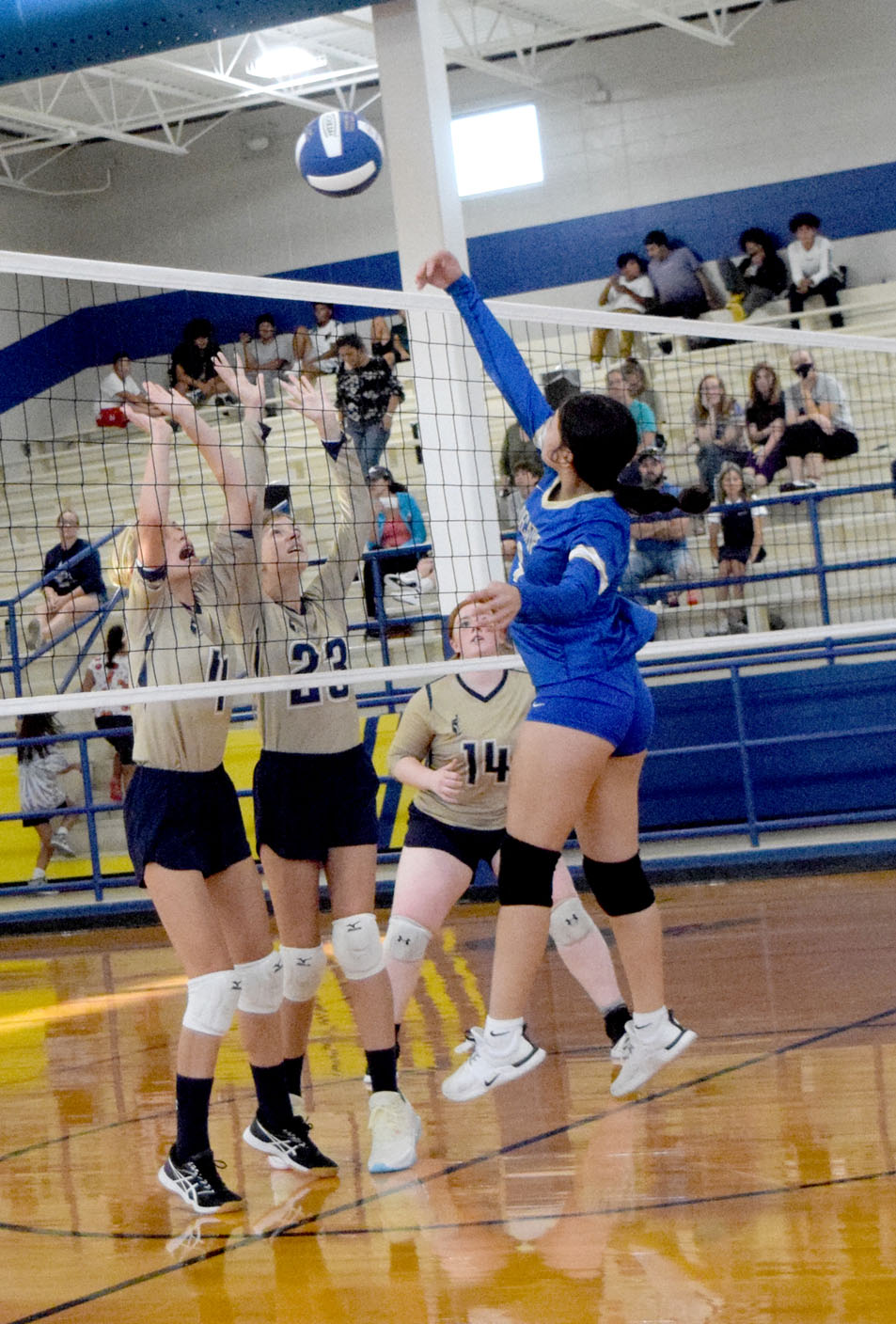 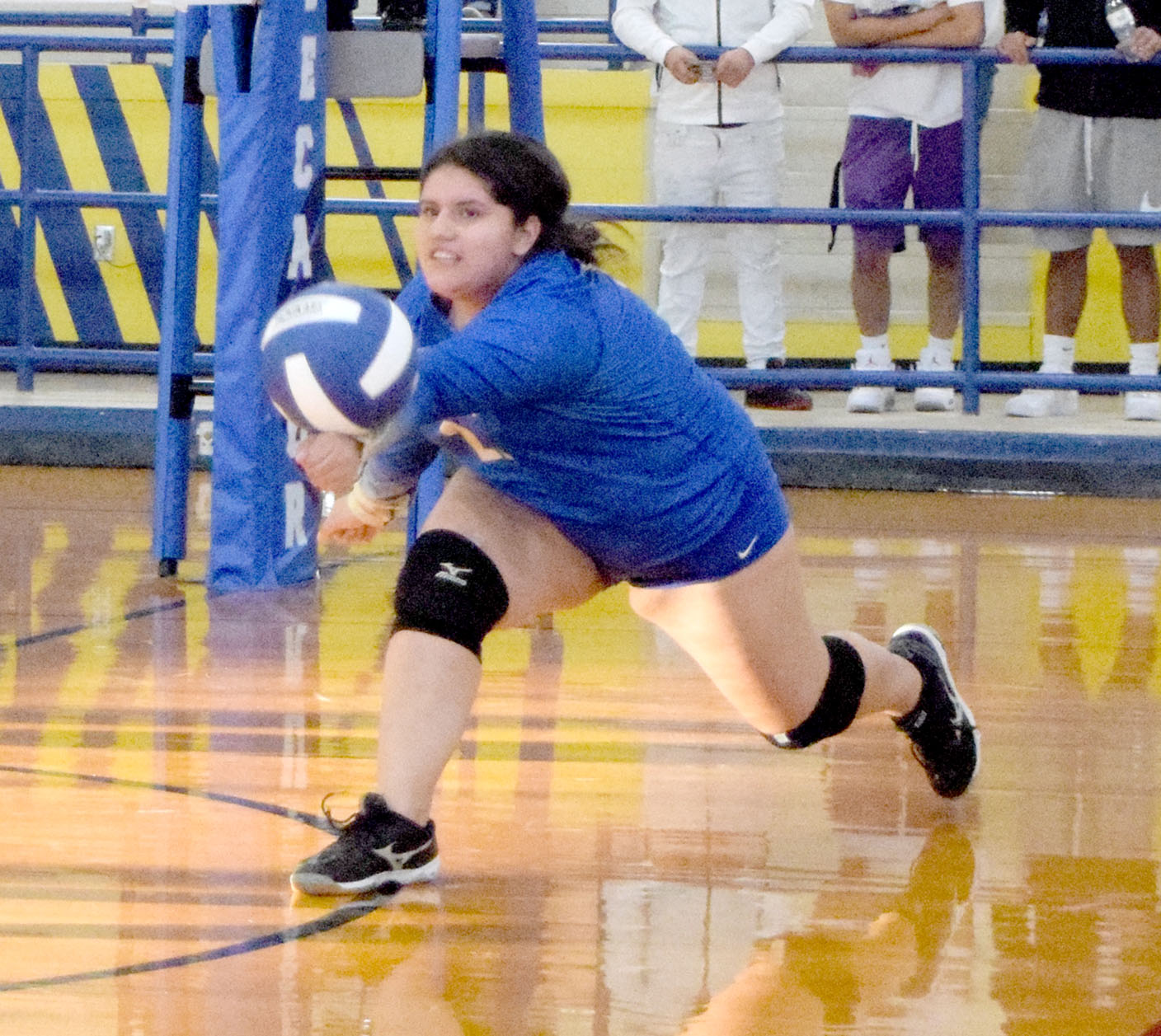 Westside Eagle Observer/MIKE ECKELS Diving for the ball, Lady Bulldog Anette Hernandez uses a single wrist hit to pass the ball to a teammate during the Thursday night Decatur-Founders Academy volleyball match at Peterson-Owens Fieldhouse in Decatur. Hernandez's effort yielded the Lady Bulldogs a point which contributed to a three set to one victory for Decatur. 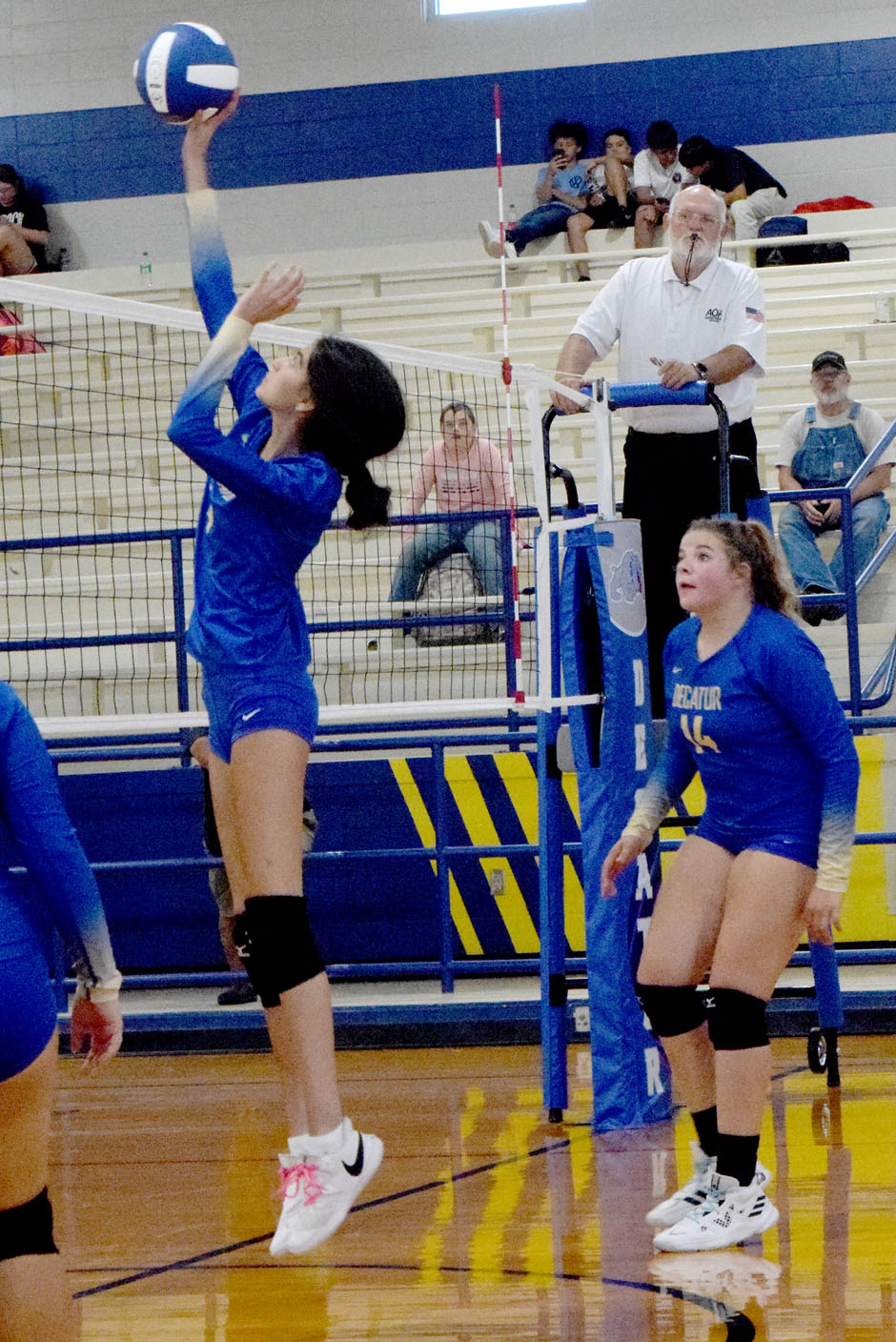 Westside Eagle Observer/MIKE ECKELS Lady Bulldog Giselle Fuentes (center) taps the ball over the net into the Lady Yellowjacket side of the court during the Decatur-Mulberry varsity volleyball match at Peterson-Owens Fieldhouse in Decatur Sept. 13. The Lady Bulldogs took the conference win in three sets. 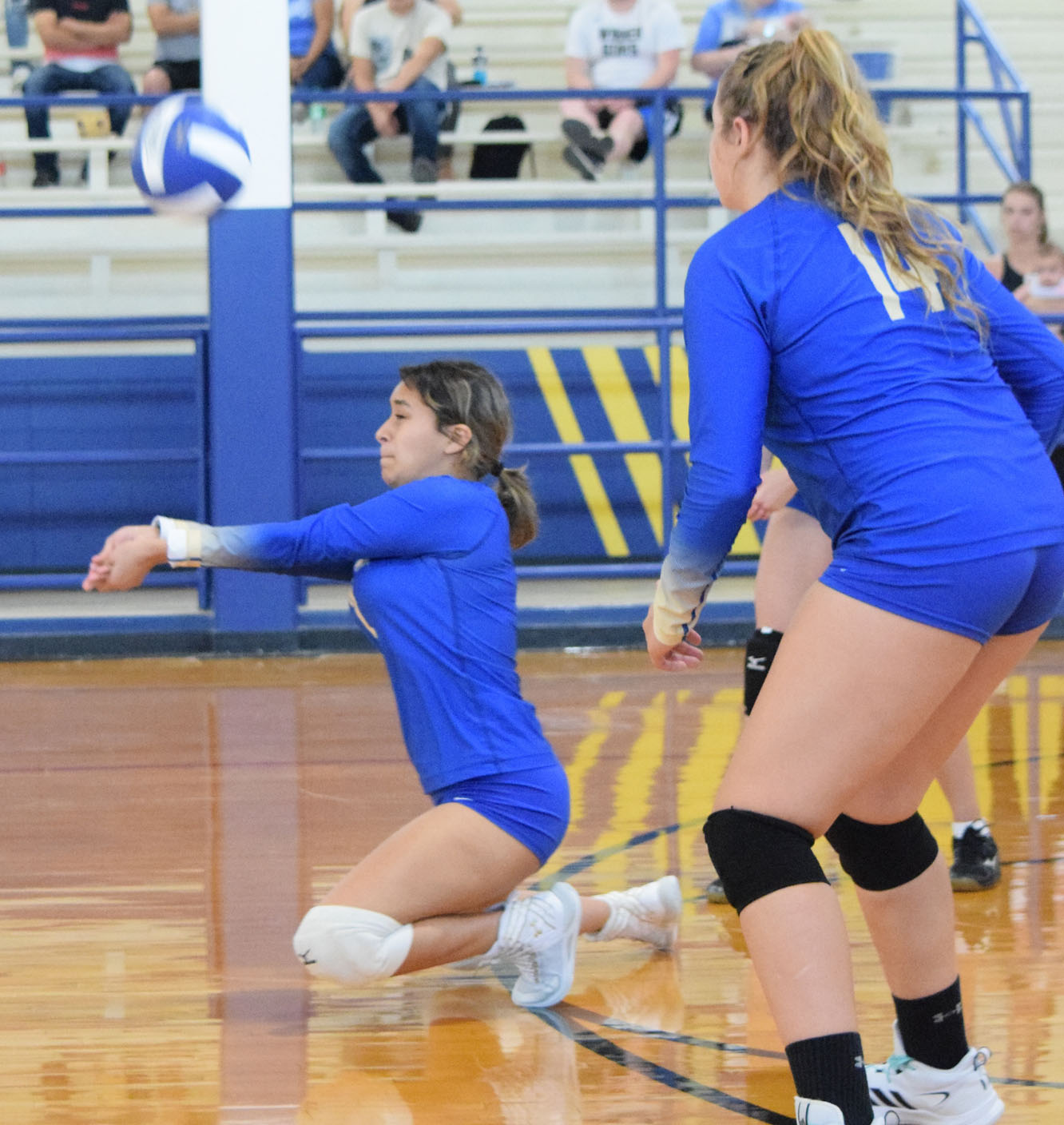 Westside Eagle Observer/MIKE ECKELS Jazmine Herrera (left) dives toward a ball in an effort to keep it in play during the Decatur-Mulberry volleyball match in Decatur Sept. 13. Herrera managed to send the ball past three middle line players for a Decatur point.

Westside Eagle Observer/MIKE ECKELS Lindy Lee delivers the ball back over the net into Lady Yellowjacket territory during the third set of the Decatur-Mulberry volleyball match in Decatur Sept. 13.