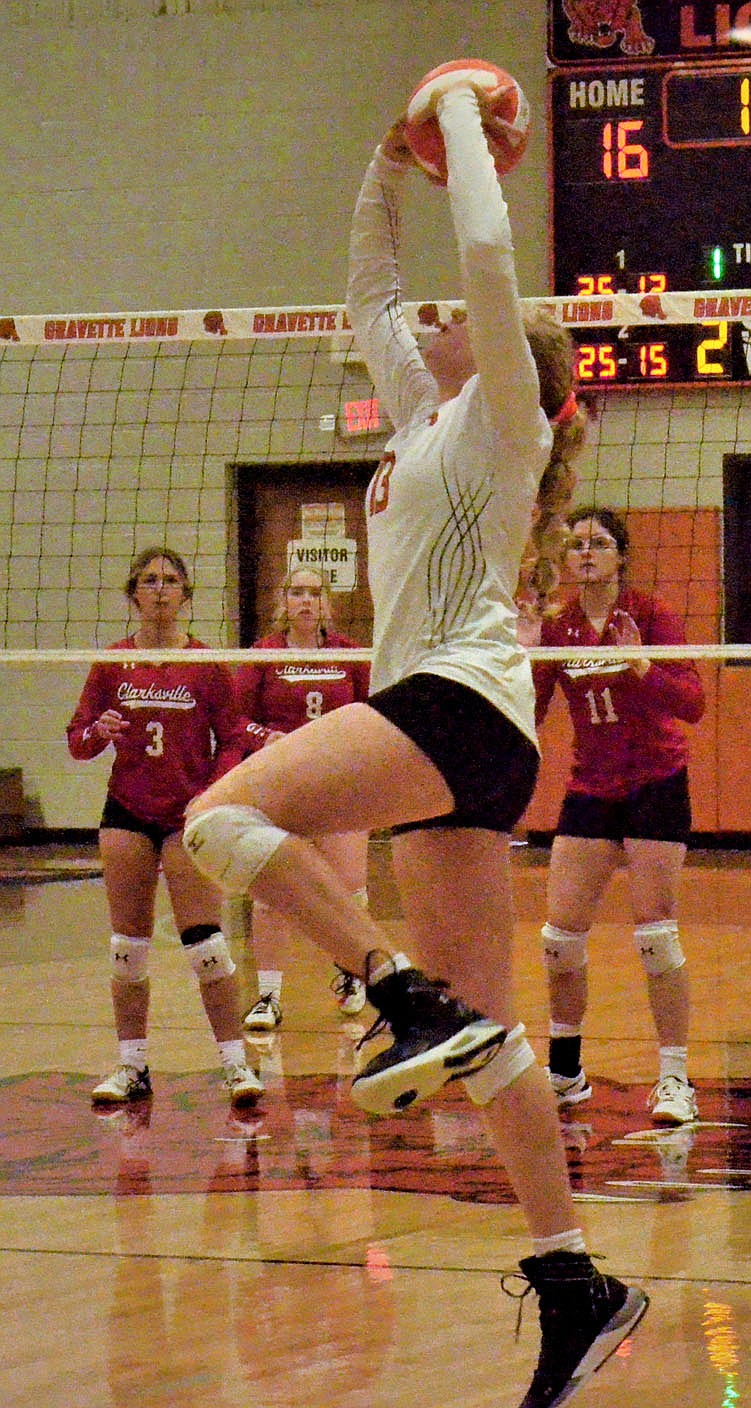 Special to the Eagle Observer/BROOK BEREZNICKI Piper Batie sets the ball for the Lady Lions during play against Clarksville on Thursday in Gravette.

GRAVETTE -- On Thursday, the Gravette Lions girls' varsity volleyball team came out on top against the Clarksville Panthers with a landslide victory, ending the match, 3-0. And, after competing in their third game this week, there's no sign of the Lions slowing down anytime soon.

Last week's game against the Huntsville Eagles was a close match. The first two sets ended with a four and two-point difference, but the Lions took the game and gained a victory over the Eagles by 11 points in the third set.

The game began with the Panthers' first serve, but the score was awarded to the Lions from player Graci Moffit, who tapped the ball to the gap left by the Panthers' left outside hitter. The first kill for the game came from Belen Nelson, who spiked the ball into left court, gaining the first set's third point. The Lions had a commanding lead, 22-9 at its highest. Eventually, the set ended at 25-12.

In the second set, the Panthers and Lions were neck and neck until the Lions broke off and took the lead, gaining 6 points consecutively at 14-8 and the Panthers couldn't catch up. As the match intensified, teams passed nine volleys over the net until the Panthers came up short and the match ended with a win for the Lions at 25-15.

In the third set, the Lions had a head start, gaining three points. Regardless, the Panthers kept up the pace, coming up behind the Lions. Each team scored one after the other. But it wasn't enough to beat the Lions who ended the set at 25-21. The win brought the Lions to 10 wins and one loss this season.

This was an important victory for the team because it helped them dig deep and push themselves harder.

"They played great," said Coach Britney Davis. "The girls came out and took care of business. This is our third game of the week and we have a tournament Saturday. So after a long week, they did really, really good."

The entire team came together and played aggressively.

"We tried to run a fast offense, and we implemented that. It was awesome."

Another key player was

Belen Nelson, who "did a really great job blocking" and is "a really good server."

"We're not just a one-hitter team," Davis added. "We have multiple players on our team, so it's hard to highlight one when they all do so well."

"The Gravette volleyball team had an amazing week. We played three games and went 3-0 each night. A few players who stood out were Piper Batie, Ella Pinches, and Laney Chilton," Davis said in an email.

This week, the Lions were to the Farmington Cardinals on Tuesday (after press time) at Farmington High School. And then, they will host the Prairie Grove Tigers on Thursday, Sept. 22. 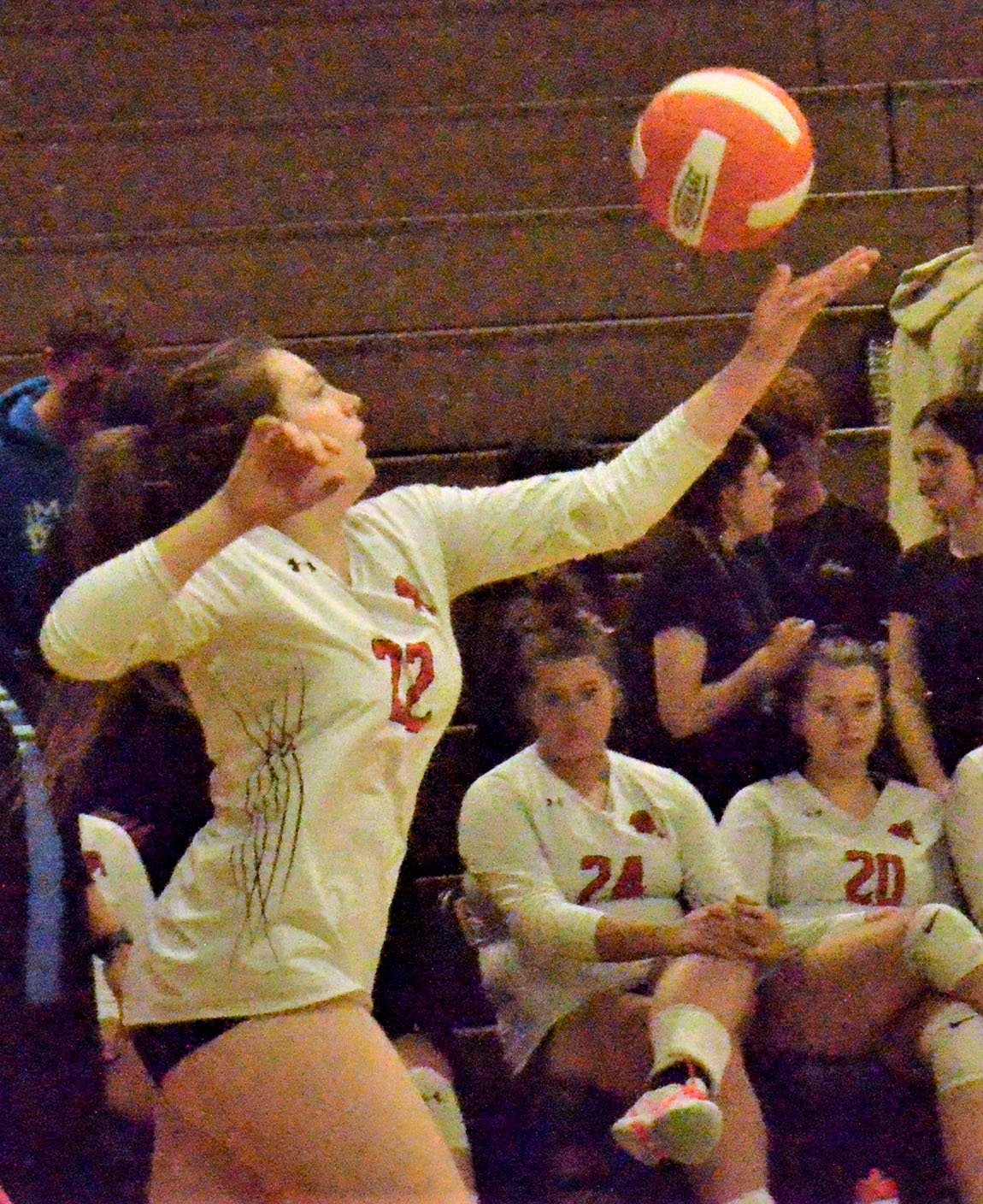 Special to the Eagle Observer/BROOK BEREZNICKI Graci Moffit serves the ball for the Lady Lions during play against Clarksville on Thursday in Gravette. 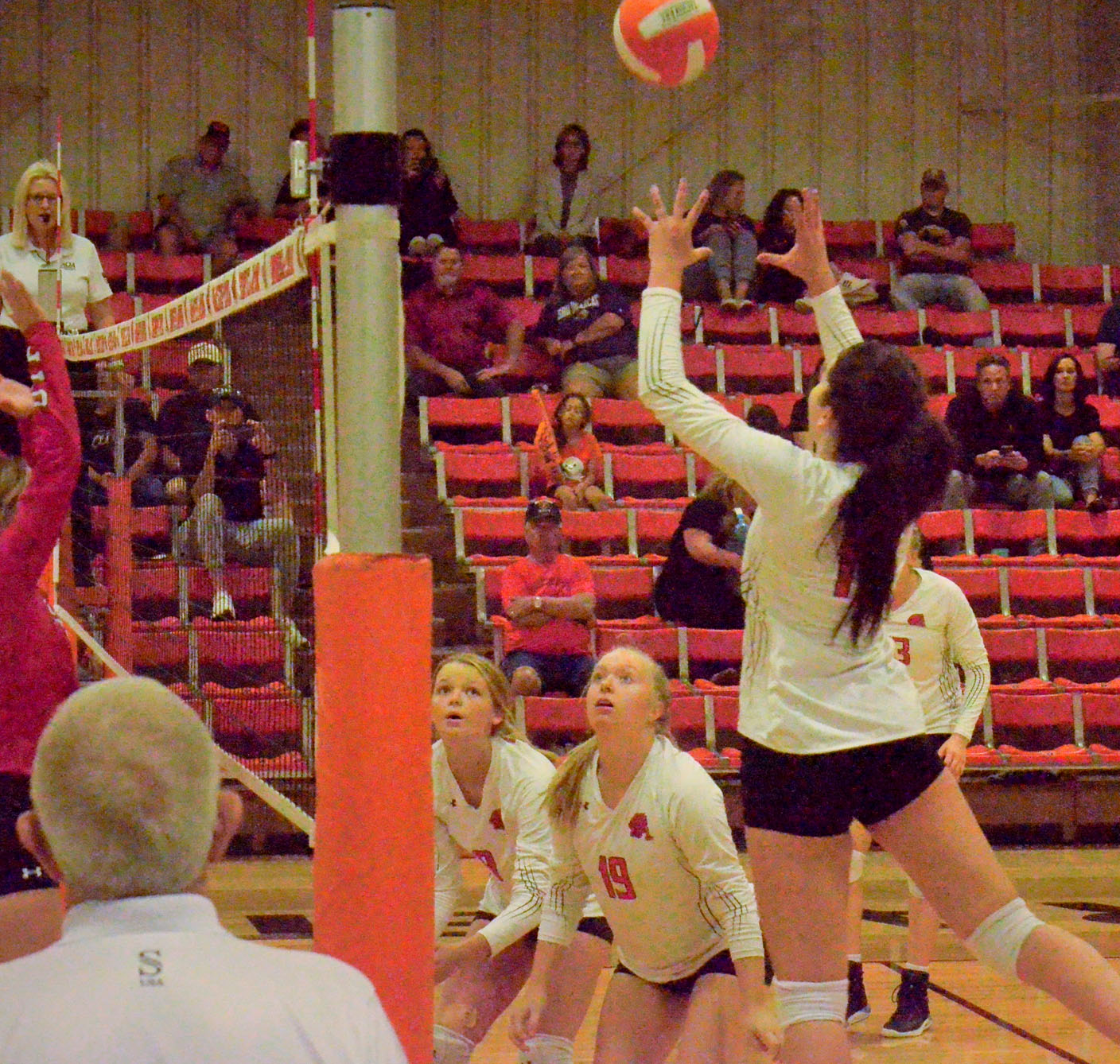 Special to the Eagle Observer/BROOK BEREZNICKI Ella Pinches sets the ball for the Lady Lions during play against Clarksville on Thursday in Gravette.